In the age of big data and artificial intelligence, the young generation is poised to revolutionize the way humans and computers interact, said Eric Schmidt, executive chairman of Google, speaking to an audience of more than 500 students from the United States and Canada at the biannual HackPrinceton on campus on Saturday, April 11.

"It's an exciting time to be young," said Schmidt, who graduated from Princeton in 1976 with a degree in electrical engineering. Schmidt looked to the students in the audience as the leaders in a future of efficient electricity grids, self-driving cars and interactive buildings that provide useful data-driven tips such as, "You can sleep in 20 more minutes because your professor will be late." Finding the right balance of what work should be done by humans and what could be handled by technology will make society much stronger and more productive, he said. 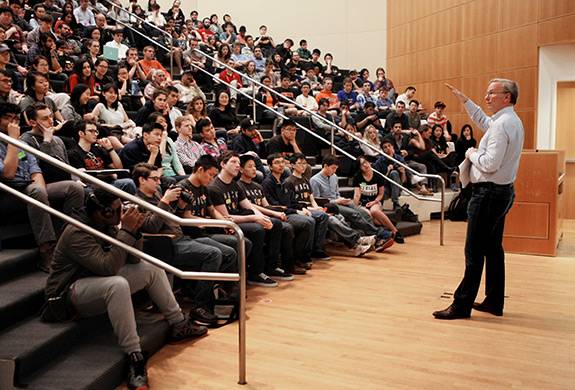 Google chair and Princeton alumnus Eric Schmidt addresses an audience of more than 500 students from numerous universities on the first day of HackPrinceton held on the Princeton campus, Saturday, April 11. HackPrinceton is one of a growing number of "hackathons" taking place around the country — collaborative events in which large numbers of students gather to write computer programs and build devices. (Photo by Frank Wojciechowski for the School of Engineering and Applied Science)

HackPrinceton is one of a growing number of "hackathons" taking place around the country — collaborative events in which large numbers of students gather for one to several days to write computer programs and build devices. HackPrinceton, part of a rising culture of quick innovation and entrepreneurship, is run by a team of 16 students from the Princeton Entrepreneurship Club and sponsored by companies such as Twitter, Kensho and Two Sigma.

Now in its fourth year, HackPrinceton brought together students from dozens of institutions for 24 hours of working on any project of their choice. The event organizers helped participants supplement their long hours of programming with activities such as specialized workshops and laser tag.

"Hackathons are essentially microcosms of the tech industry," said Raeva Kumar, a sophomore majoring in philosophy and one of the co-directors of HackPrinceton. "This means that we can create a small-scale space to address apparent problems in that culture."

She pointed to an emphasis on learning and inspiration rather than competition, and encouraging women and minorities to participate in HackPrinceton. This semester, nearly 40 percent of registered participants were female. 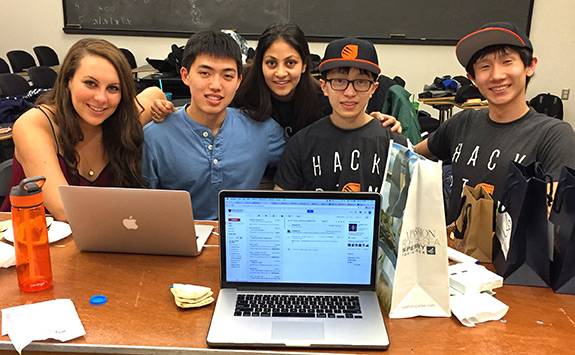 Professor Edward Felten, the Robert Kahn Professor of Computer Science and Public Affairs and director of Princeton's Center of Information Technology, closed the event with a talk on technology policy in China.

During the awards ceremony on Sunday, the top three projects in hardware and software were honored, and company sponsors also awarded special prizes. First prize in the hardware category was awarded to undergraduates Joseph Bolling and Ankush Gola and graduate student Ted Brundage from Princeton, who designed IneFISHency, a robot mounted outside a fish tank that follows the movements of a real fish swimming inside. Second prize was awarded to students from Yale University, who built iDuino, a child-friendly iPhone interface for programming the prototyping tool Arduino. Quentin Caudron and Romain Garnier, postdoctoral researchers in ecology and evolutionary biology at Princeton, won third place for a mousetrap that is selectively activated by radio signals.

Kumar noted the increased focus on hardware projects in recent years. The Princeton event has become well known among students as the hackathon with the best hardware track in the nation, she said. 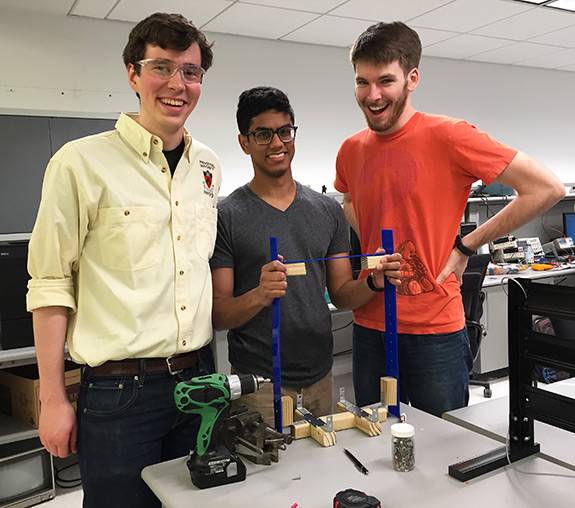 First prize in the hardware category went to, from left, graduate student Ted Brundage and seniors Ankush Gola and Joseph Bolling, who designed IneFISHency, a robot mounted outside a fish tank that follows the movements of a real fish swimming inside. (Photo by Jill Feldman, Office of Communications)

First place in software was awarded to a student from Western University, who designed Mars Explorer, which allows the user to explore Mars using the virtual reality platform Occulus Rift with satellite data from the European Space Agency. A four-student team from Boston University won second place with Osiris Ninja Back Up, a program that uses YouTube as a storage space by uploading videos encoded with data. A student from the University of Oklahoma won third place with SnapSifter, a communal sharing space for the popular social media app Snapchat.

"We want to inspire students with the art of creation," said Jerry Liu, co-director of HackPrinceton and a sophomore in computer science. "This is a chance for them to develop real skills by building actual projects." 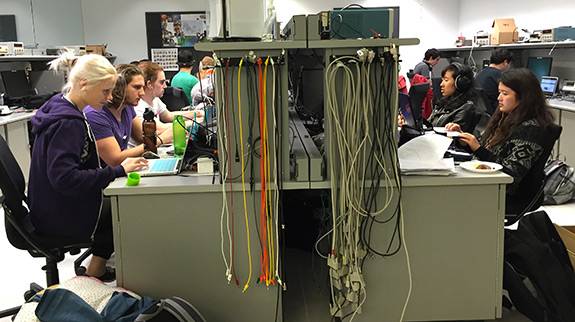 Indeed, this culture of free and unrestrained innovation is the key to creating products that can tackle new and big problems, suggested Schmidt.

"I'm absolutely convinced that a society that enables permission-less innovation — the kind of stuff that's before us here, where we just try stuff — will be the most successful," Schmidt said. "If you want to solve the problems of America — and there's a long list — the best way to start is to let people be entrepreneurs, create businesses and solve some of the great opportunities before us."

He added that government support for research and entrepreneurship goes a long way to promote new technologies.

"It's been 40 years since I graduated," said Schmidt. "I assure you that when you come back 40 years from now, you will be in awe of what has happened."