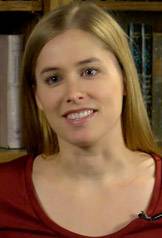 Kimberly Shepard is one of four co-winners of this year's Porter Ogden Jacobus Fellowship, Princeton University's top honor for graduate students. A doctoral student in Princeton's Department of Chemical and Biological Engineering, Shepard is studying the behavior of polymer glasses, materials that do not have a crystal structure.

Video still from the Broadcast Center

Using laser beams to create thin films of material, graduate student Kimberly Shepard studies the physics and behavior of polymer glasses, or materials that do not have a crystal structure.

"One of the things I was excited to see Kim do over the course of her time here was to really embrace the idea of becoming a laser person as well as becoming a polymer physicist," Priestley said. "Kimberly is a dedicated and outstanding student and has fully embraced the graduate student experience in terms of research, teaching and mentoring of younger students."

Shepard, of Pompton Plains, New Jersey, is one of four co-winners of this year's Porter Ogden Jacobus Fellowship, Princeton University's top honor for graduate students. The fellowships support the final year of study at Princeton and are awarded to students whose work has exhibited the highest scholarly excellence. The Jacobus Fellows were honored at Alumni Day ceremonies Saturday, Feb. 21, at Jadwin Gymnasium.

Shepard holds bachelor's and master's degrees from the Stevens Institute of Technology. After graduate school, she hopes to work in industry before pursuing a career in academia.

"Combining my strengths gained from time spent in academic and industrial research, I hope to use my career as a professor to inspire a lifelong enthusiasm for science in my students, which will serve them well regardless of their intended major and profession," she said.

Kimberly Shepard, a doctoral student in the Department of Chemical and Biological Engineering, is studying the behavior of polymer glasses, materials that do not have a crystal structure. (Video by the Broadcast Center)