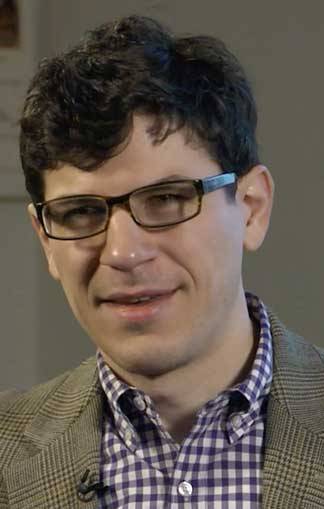 Evan Hepler-Smith, a doctoral student in Princeton's Program in History of Science, is studying the framework for naming chemical compounds. In this video, he and his adviser discuss how a variety of disciplines inform his work, which earned him a Jacobus Fellowship, the University's top honor for graduate students.

Video still from the Broadcast Center

In studying the origins of the complex system for naming chemical compounds, Evan Hepler-Smith examines the fundamental ways in which scientific knowledge is made.

Hepler-Smith, from Pittsburgh, Pennsylvania, has been a doctoral student in the Program in History of Science since 2010. His dissertation, titled "Nominally Rational: Systematic Nomenclature and the Structure of Organic Chemistry, 1889-1940," examines the history and impact of the International Commission on Chemical Nomenclature, which established the framework for naming chemical compounds.

"He is truly a stunning scholar," said Michael Gordin, the Rosengarten Professor of Modern and Contemporary History and Hepler-Smith's adviser. "He moves from nuanced technical concerns to grand philosophical questions, grounding those in the nitty-gritty of factional politics, in the three languages of 19th-century chemistry (German, French and English), and with a lucid writing style to boot."

Hepler-Smith is one of four co-winners of this year's Porter Ogden Jacobus Fellowship, Princeton University's top honor for graduate students. The fellowships support the final year of study at Princeton and are awarded to students whose work has exhibited the highest scholarly excellence. The Jacobus Fellows were honored at Alumni Day ceremonies Saturday, Feb. 21, at Jadwin Gymnasium.

Hepler-Smith, who received his bachelor's degree from Harvard University, hopes to pursue a career in academia focusing on teaching the history of science and technology in the modern world, the history of chemical sciences and industry, and the history of information technology.

"Whether squarely within the context of a history curriculum or in cross-disciplinary settings, I aspire to cultivate in my students an appreciation for how humanistic study can shed light on technical inquiry," he said.

Evan Hepler-Smith, a doctoral student in the Program in History of Science, is studying the origins of the system for naming chemical compounds. (Video by the Broadcast Center)