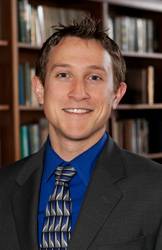 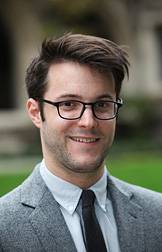 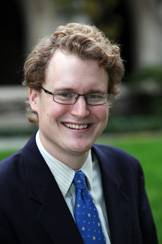 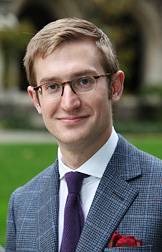 Princeton University graduate students Richard Baliban, William Cavendish, William Deringer and Andrew Huddleston have been named as co-winners of the Porter Ogden Jacobus Fellowship, Princeton's top honor for graduate students. The fellowship supports the final year of study and is awarded to students whose work has exhibited the highest scholarly excellence.

The Jacobus Fellows will be honored at Alumni Day ceremonies Saturday, Feb. 25, at Jadwin Gymnasium.

Baliban, a doctoral student in the Department of Chemical and Biological Engineering, earned a bachelor's degree in chemical engineering and mathematics from the University of Pennsylvania. Before enrolling at Princeton, Baliban worked as an engineer for ExxonMobil.

His dissertation focuses on the development of computational tools to identify and quantify peptides and proteins, with the goal of enhancing the accuracy of cell analysis. The technique is commonly used to analyze the root causes of breast cancer, gingivitis and other diseases. In addition, Baliban has worked on developing new frameworks for hybrid energy systems.

"Rich is without doubt a brilliant researcher with a great future lying ahead," said Baliban's dissertation adviser Christodoulos Floudas, the Stephen C. Macaleer '63 Professor in Engineering and Applied Science, and professor of chemical and biological engineering. "Primary characteristics of Rich are his amazing theoretical and computational ability, his impressive and smooth transition and interplay between theory and experiments, his natural scientific maturity and persistence when attacking challenging problems, his highly inquisitive and independent research mind, and his drive for perfection."

Baliban said he hopes to have a career involving alternative energy research in which he can contribute to a stronger national energy outlook by working on state-of-the-art research projects.

"I want to apply my engineering skills to industrial problems and develop solutions that are practical, effective and financially reasonable," he said.

Cavendish, a Ph.D. candidate in the Department of Mathematics, came to Princeton after studying mathematics as an undergraduate at the University of Chicago and as a master's student at Brown University.

Cavendish's studies focus on low-dimensional topology and geometry, two active areas of modern mathematics. His work addresses questions about symmetries of low-dimensional objects, such as the patterns in a chain-link fence.

"Though symmetry is most often thought of as a geometric phenomenon, symmetry is central to every field of mathematics from abstract algebra and number theory to differential equations and dynamics," Cavendish said.

"He is very independent, he found his research problems and direction by himself, he absorbs mathematics voraciously, and fearlessly attacks problems that stump the most famous mathematicians. He learns difficult new techniques when needed and has taught me a lot more than I have taught him," said Gabai, the Hughes-Rogers Professor of Mathematics.

Deringer's dissertation builds on his master's studies, exploring the economic history of Britain's "financial revolution" from 1688 to 1738. His work has been informed by his professional experience as an investment-banking analyst.

"For my dissertation, I decided to investigate how mathematics, politics and ethics entwined in the economic controversies of early modern Britain," Deringer said. "I am committed to making that project one that transcends the traditionally large gaps between three historical subfields — the history of science, British political history and economic history — and also one that contributes to conversations in political science, sociology and economics."

His adviser, Professor of History Michael Gordin, noted that Deringer's scholarship "accomplishes two rare features for an early modern history of science dissertation: it is strikingly original, and it is very relevant."

Gordin added that Deringer is a "highly gifted historian" as well as a "fantastic teacher."

Huddleston, a Ph.D. candidate in the Department of Philosophy, studied as an undergraduate at Brown University and the University of Cambridge. He joined Princeton's graduate program in 2007.

Huddleston's dissertation examines the works of 19th-century German philosopher Friedrich Nietzsche, using Nietzsche's profound concern with the decadence and flourishing of cultures as a guiding thread for investigating the central themes in his ethics and social philosophy.

"I am eager to work out Nietzsche's philosophical positions not so much because I think he is obviously right about all of them, but because I think that what he does have to say is stimulating and provocative, even if it is sometimes overstated, and on occasion, shocking and repellent as well. So often the value of the history of philosophy is to remind us that we cannot always take our own views for granted," Huddleston said.

His adviser Alexander Nehamas, the Edmund N. Carpenter II Class of 1943 Professor in the Humanities and professor of philosophy and comparative literature, called Huddleston "the most promising young philosopher with an interest in Nietzsche and the philosophy of art in this country."