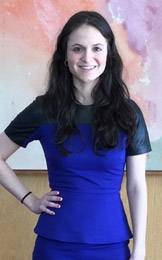 Princeton student Rebecca Basaldua's senior thesis focuses on rape kits, which contain physical evidence collected from sexual assault victims and can play an important role in identifying and convicting rapists. The thesis, titled "Justice Untested, Crime Unsolved,” combines information on reports of rape in Colorado and use of sexual assault kits from 2009 to 2012 with information about law enforcement agencies, their budgets and the communities they serve.

The politics major's thesis focuses on rape kits, which contain physical evidence collected from sexual assault victims and can play an important role in identifying and convicting rapists. Sometimes, though, victims go through the invasive, hours-long procedure for the evidence to be collected only to see the kits remain untested for years.

Basaldua, who is from Edinburg, Texas, wanted to understand how often — and why — that happens.

When she found few answers in the limited academic research on the topic and scant data for her to analyze, she began to build her own sets of data. Basaldua looked first at a handful of states that require law enforcement agencies to report on untested rape kits, contacting government officials to provide data and answer questions. Eventually Colorado emerged as the state where the most useful information was available.

When she realized even the data from Colorado was incomplete, Basaldua tracked down officials in police departments and sheriff's offices across the state to fill in the gaps. 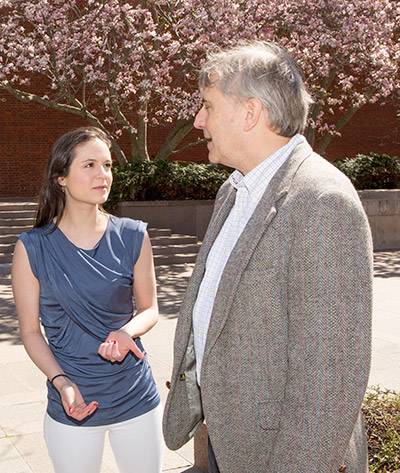 Basaldua worked closely with her thesis adviser, Charles Cameron, a professor of politics and public affairs. "I would never have been able to write this thesis if he had not been my thesis adviser,” Basaldua said. (Photo by Denise Applewhite, Office of Communications)

Then, when she needed information about rape crisis centers and special programs that provide training for collecting sexual assault kits, Basaldua built a database and enlisted the help of other students to make weeks' worth of phone calls to determine when each center and program was established.

"Sometimes students take on an impossible project. Then they do it," said Charles Cameron, a professor of politics and public affairs who advised Basaldua on her thesis. "It's amazing. She just spent a lot of time on the telephone, ferreting out the people who had this information, calling people in state and city government, talking to people in rape crisis centers. She has put together what is undoubtedly the best information that's ever been collected on this issue."

The result of Basaldua's efforts is a thesis titled "Justice Untested, Crime Unsolved"
that combines information on reports of rape in Colorado and use of sexual assault kits from 2009 to 2012 with information about law enforcement agencies, their budgets and the communities they serve.

"I wanted to understand more about the areas that have large backlogs of untested kits and the prevailing characteristics of those communities," Basaldua said.

Because recent research has shown that many law enforcement agencies systematically under-report sexual assaults, Basaldua said it was also important to understand the characteristics of agencies that report higher — and likely more accurate — numbers of such assaults.

For example, she found that law enforcement agencies with larger budgets and larger numbers of female officers report more rapes in Federal Bureau of Investigation statistics. 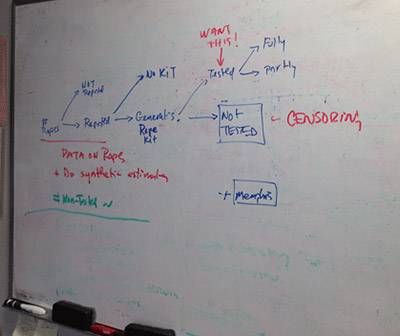 Basaldua and Cameron used a whiteboard in Cameron’s office to create a flow chart of the possible progression of sexual assault cases, from the assault itself through the collection and testing of a sexual assault kit. (Photo by Michael Hotchkiss, Office of Communications)

Basaldua speculated that agencies with larger budgets may also, on average, be more professional and thus likely to accurately report the number of reported assaults. Those departments may also have more resources to devote to solving the crimes. And higher numbers of female officers may make women feel more willing to report their assault because they think their reports will be believed and investigated, she said.

Finally, her research looked at the relationship between the budget of law enforcement agencies and their backlog of rape kits that have been used to collect evidence but not analyzed. While agencies criticized for large backlogs have often pointed to budget limitations, Basaldua said she didn't find that budgets were a factor in whether an agency reported a large backlog.

A few days after she submitted her thesis, Basaldua already was thinking about how she could further the research. She wants to investigate a big jump in the percentage of rape kits that went untested in several states in 2008-09 and try to understand how the type of sexual assault that is reported affects the likelihood that a rape kit is tested.

Eventually, she hopes the work will be published in an academic journal.

Cameron said other researchers should find the data she collected helpful.

"The data should really be archived so others can use it," Cameron said. "There will be a lot of researchers who could benefit from access to it. She is really a trailblazer." 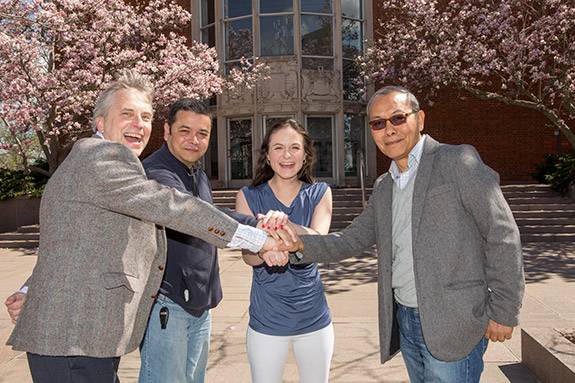 Along with assistance from Cameron, Basaldua called on the expertise of many on campus for her thesis, including (far right) Tsering Wangyal Shawa, a geographic information systems librarian, and (second from left) Oscar Torres-Reyna, a data services specialist. (Photo by Denise Applewhite, Office of Communications)

As she worked her way through the challenges of collecting and analyzing the data at the heart of her thesis, Basaldua kept in close communication with Cameron, who specializes in the analysis of political institutions. They would touch base briefly one week or meet for several hours the next to tackle a tough problem, Basaldua said. As her deadline neared, they met daily, she said.

At one meeting, they used the whiteboard in Cameron's Corwin Hall office to work through the possible paths a sexual assault case can follow, from the assault itself through reporting to the collection and examination of a rape kit.

Cameron also advised one of Basaldua's junior papers, so they have worked together for about a year and a half.

"I would never have been able to write this thesis if he [Professor Cameron] had not been my thesis adviser, first because probably no other adviser would have been willing to give me the incredible amount of time that he gave to me to teach me how to produce the best analysis of my data and second because if it had not been for him, I might not have stuck with this topic and I certainly would not have enjoyed it or the process as much as I did," Basaldua said.

In addition to addressing sexual assault in her thesis, Basaldua has been active in issues related to the topic on campus. She wrote her junior paper on sexual assaults at Princeton and serves on the University's Faculty-Student Committee on Sexual Misconduct. She spoke in a video shared with students to promote participation in the recent "We Speak: Attitudes on Sexual Misconduct at Princeton" survey.

Basaldua is editor of the campus publication "Equal Writes" and has served as president of the group Princeton Latinos y Amigos.

Though she worked through more than a few sleepless nights to complete her thesis, Basaldua said her project was worth it.

"At the end of the day, you should do the thesis you love," Basaldua said. "I truly loved my thesis, and I was truly excited by my thesis."