Baltimore, Maryland, and Ferguson, Missouri, share more than being the sites of racial strife over the past year. Both are part of metropolitan areas where black residents have been hypersegregated for the past four decades, according to Princeton researchers.

"Hypersegregation produces high levels of social isolation from mainstream society, but also high concentrations of poverty and disadvantage," said Douglas Massey, the Henry G. Bryant Professor of Sociology and Public Affairs and director of Princeton's Office of Population Research. "If you look at the cityscape of the United States, hypersegregated cities are the places where our most severe problems of urban poverty, of racial inequality, of racial violence of various sorts are taking the most fervent root."

Massey and Jonathan Tannen, a graduate student in urban and population policy, reviewed Census data on almost all U.S. metropolitan areas for each decade from 1970 to 2010 for an article published in the journal Demography in March. They found that the number of hypersegregated metropolitan areas in the United States dropped from 40 in 1970 to 21 in 2010. Hypersegregated areas are those where black residents experience high levels of segregation across a range of measures, including the extent to which black residents live in neighborhoods that are all or almost-all black and the extent to which black residents live in cities' cores, where housing is often oldest.

"The places that are hypersegregated today are the nation's large urban black ghettos — New York, Chicago, Cleveland, Milwaukee, St. Louis and Philadelphia," Massey said. "Although we've clearly made progress, the problems in many ways are becoming more intractable because there are now generations of black families in these places that have lived under conditions of hypersegregation and a high concentration of poverty."

There are no easy answers in areas where hypersegregation remains, he said.

"We've made clear progress, but there's still a lot of work that needs to be done and that integration isn't going to happen simply of its own accord in places with large urban black communities," Massey said. "It will require more action to promote integration and to remove the barriers of discrimination in rental and sales markets for housing and in lending markets for mortgages." 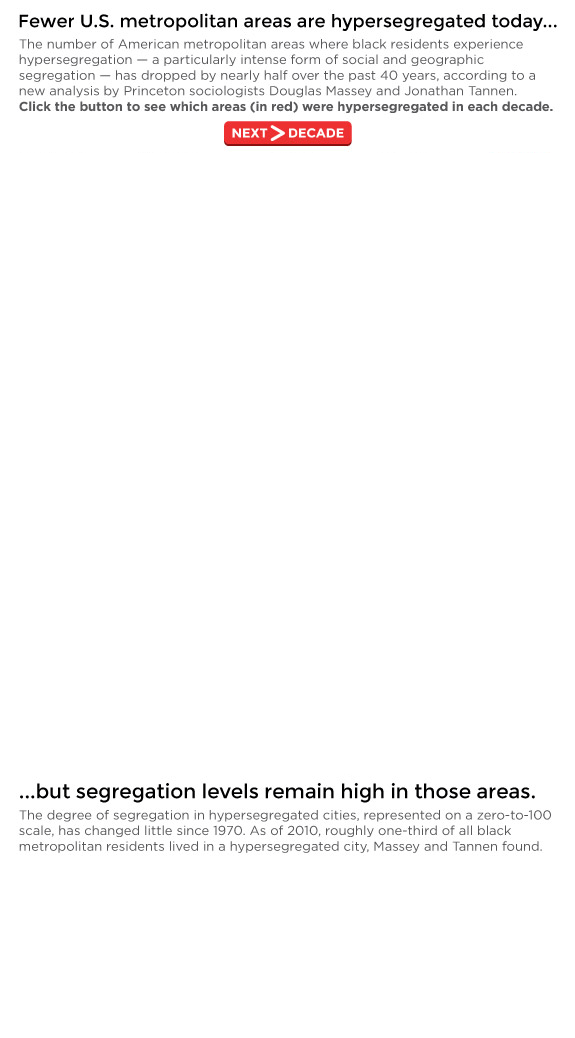