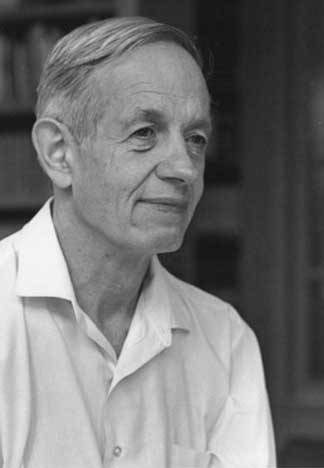 John Nash Jr., renowned for his breakthrough work in mathematics and game theory as well as for his struggle with mental illness, died in an automobile accident May 23. He was 86.

John Nash Jr., a legendary fixture of Princeton University's Department of Mathematics renowned for his breakthrough work in mathematics and game theory as well as for his struggle with mental illness, died with his wife, Alicia, in an automobile accident May 23 in Monroe Township, New Jersey. He was 86, she was 82.

During the nearly 70 years that Nash was associated with the University, he was an ingenious doctoral student; a specter in Princeton's Fine Hall whose brilliant academic career had been curtailed by his struggle with schizophrenia; then, finally, a quiet, courteous elder statesman of mathematics who still came to work every day and in the past 20 years had begun receiving the recognition many felt he long deserved. He had held the position of senior research mathematician at Princeton since 1995.

Nash was a private person who also had a strikingly public profile, especially for a mathematician. His life was dramatized in the 2001 film "A Beautiful Mind" in which he and Alicia Nash were portrayed by actors Russell Crowe and Jennifer Connelly. The film centered on his influential work in game theory, which was the subject of his 1950 Princeton doctoral thesis and the work for which he received the 1994 Nobel Prize in economics.

At heart, however, Nash was a devoted mathematician whose ability to see old problems from a new perspective resulted in some of his most astounding and influential work, friends and colleagues said. 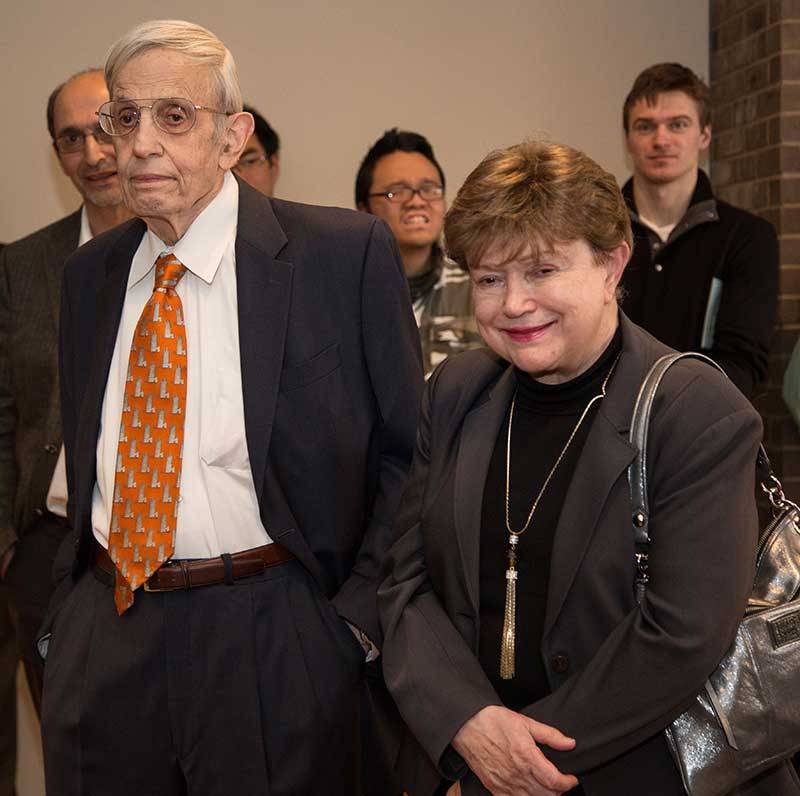 Nash and his wife, Alicia (right), who died with him May 23, are pictured at a March 25 reception in honor of Nash's receipt of the 2015 Abel Prize from the Norwegian Academy of Science and Letters, one of the most prestigious honors in mathematics. The couple often attended events in Princeton's Department of Mathematics and were very supportive of undergraduate education. (Photo by Danielle Alio, Office of Communications)

At the time of their deaths, the Nashes were returning home from Oslo, Norway, where John had received the 2015 Abel Prize from the Norwegian Academy of Science and Letters, one of the most prestigious honors in mathematics. The prize recognized his seminal work in partial differential equations, which are used to describe the basic laws of scientific phenomena. For his fellow mathematicians, the Abel Prize was a long-overdue acknowledgment of his contributions to mathematics.

For Nash to receive his field's highest honor only days before his death marked a final turn of the cycle of astounding achievement and jarring tragedy that seemed to characterize his life. "It was a tragic end to a very tragic life. Tragic, but at the same time a meaningful life," said Sergiu Klainerman, Princeton's Eugene Higgins Professor of Mathematics, who was close to John and Alicia Nash, and whose own work focuses on partial differential equation analysis.

"We all miss him," Klainerman said. "It was not just the legend behind him. He was a very, very nice person to have around. He was very kind, very thoughtful, very considerate and humble. All that contributed to his legacy in the department. The fact that he was always present in the department, I think that by itself was very moving. It's an example that stimulated people, especially students. He was an inspiring figure to have around, just being there and showing his dedication to mathematics."

Princeton President Christopher L. Eisgruber said Sunday that the University community was "stunned and saddened by news of the untimely passing of John Nash and his wife and great champion, Alicia."

"Both of them were very special members of the Princeton University community," Eisgruber said. "John's remarkable achievements inspired generations of mathematicians, economists and scientists who were influenced by his brilliant, groundbreaking work in game theory, and the story of his life with Alicia moved millions of readers and moviegoers who marveled at their courage in the face of daunting challenges." 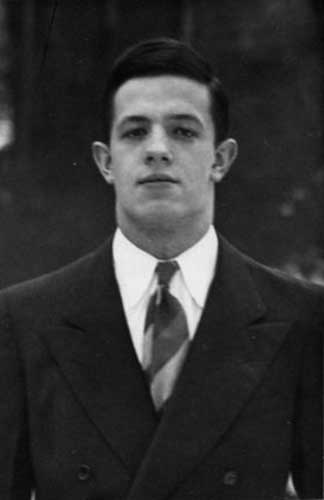 Nash, as shown above in his Graduate School application photo, became associated with Princeton in 1948 when he began his doctoral studies under the late professor Albert Tucker. For the past several decades, Nash was a fixture at Fine Hall, holding the position of senior research mathematician at Princeton since 1995. (Photo courtesy of Princeton University Archives)

Although Nash did not teach or formally take on students, his continuous presence in the department over the past several decades, coupled with the almost epic triumphs and trials of his life, earned him respect and admiration, said David Gabai, the Hughes-Rogers Professor of Mathematics and department chair.

"John Nash, with his long history of achievements and his incredible battle with mental health problems, was hugely inspirational," Gabai said. "It's a huge loss not to have him around anymore."

Even in the 1970s when Nash, still struggling with mental illness, was an elusive presence known as the "Phantom of Fine Hall," his reputation for bravely original thinking motivated aspiring mathematicians, said Gabai, who was a Princeton graduate student at the time. Nash's creativity helped preserve the department's emphasis on risk-taking and exploration, he said.

"In those days, he was very present, but rarely said anything and just wandered benignly through Fine Hall. Nevertheless, we all knew that the mathematics he did was really spectacular," Gabai said. "It went beyond proving great results. He had a profound originality as if he somehow had insights into developing problems that no one had even thought about.

"I think he prided himself that he had his way of thinking about things," Gabai continued. "He was such an extraordinary exemplar of the things that this department strives for. Beyond great originality, he demonstrated tremendous tenacity, courage and fearlessness."

Since winning the Nobel Prize, Nash had entered a long period of renewed activity and confidence — which coincided with Nash's greater control of his mental state — that allowed him to again put his creativity to work, Klainerman said. He met Nash upon joining the Princeton faculty in 1987, but his doctoral thesis had made use of a revolutionary method introduced by Nash in connection to the Nash embedding theorems, which the Norwegian Academy described as "among the most original results in geometric analysis of the twentieth century."

"When he got the Nobel Prize, there was this incredible transformation," Klainerman said. "Prior to that we didn't realize he was becoming normal again. It was a very slow process. But after the prize he was like a different person. He was much more confident in himself."

During their frequent talks in recent years, Nash would offer unique perspectives on numerous topics spanning mathematics and current events, Klainerman said. "Even though his mind wasn't functioning as it did in his youth, you could tell that he had an interesting point of view on everything. He was always looking for a different angle than everybody else. He always had something interesting to say." 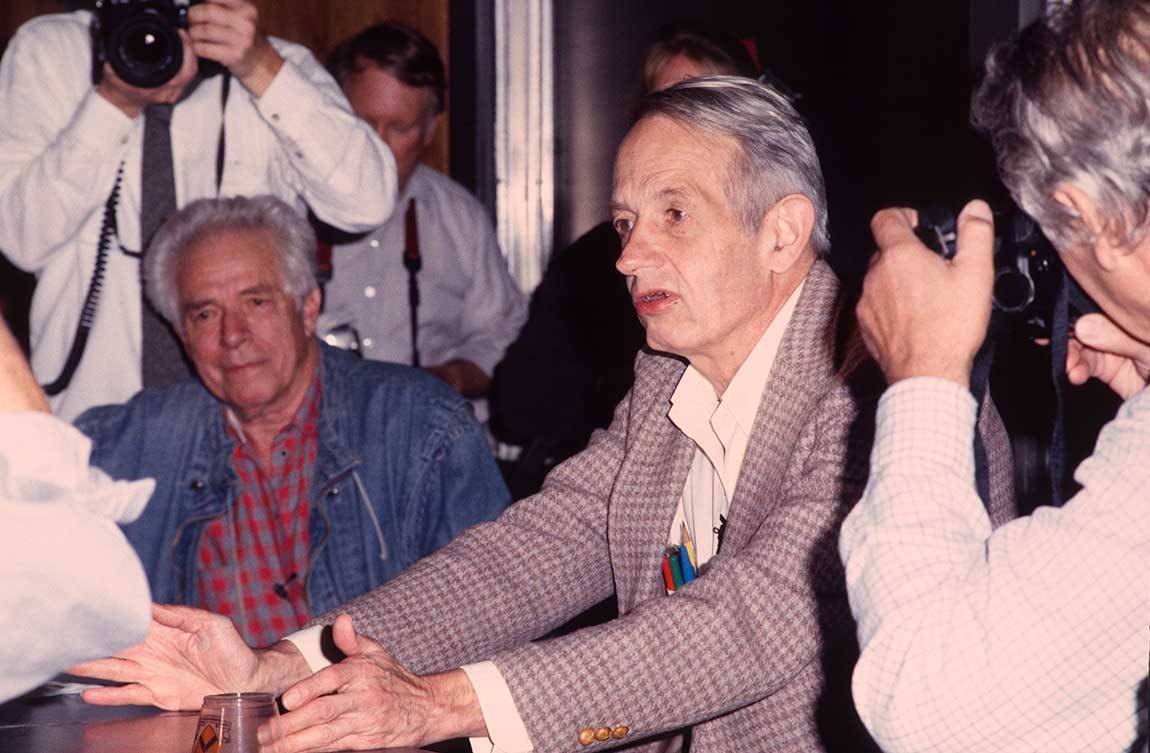 Nash's life was dramatized in the 2001 film "A Beautiful Mind," which centered on his influential work in game theory. The subject of his 1950 Princeton doctoral thesis, the work earned Nash the 1994 Nobel Prize in economics. Nash is pictured above at a 1994 press conference following his receipt of the Nobel Prize. Seated next to Nash is the late Princeton mathematics professor Harold Kuhn, a lifelong friend of Nash who was central to having Nash's work recognized by the Nobel Prize committee. (Photo by Denise Applewhite, Office of Communications)

Nash's quick and distinctive mind still shone in his later years, said Michail Rassias, a visiting postdoctoral research associate in mathematics at Princeton who was working with Nash on the upcoming book, "Open Problems in Mathematics." He and Nash had just finished the preface of their book before Nash left for Oslo. They agreed upon a quote from Albert Einstein that resonated with Nash (although Nash pointed out that Einstein was a physicist, not a mathematician, Rassias said): "Learn from yesterday, live for today, hope for tomorrow. The important thing is not to stop questioning."

"Even at 86, his mind was still open," Rassias said. "He still wanted to have new ideas. Of course, he couldn't work like when he was 20, but he still had this spark, the soul of a young mathematician. The fact that he moved slowly and talked with a quiet voice had nothing to do with the enthusiasm with which he did mathematics. It was very inspirational."

Sixty years younger than Nash, Rassias said his work with Nash began with a conversation in the Fine Hall commons room in September.

"I could tell there was mathematical chemistry between us and that led to this intense collaboration. He was very simple, very open to discussing ideas with new people if you said something that attracted his interest," Rassias said. "Nash gave this impression that he was distant, but when you actually had the opportunity to talk to him he was not like that. He tended to walk alone, but if you got the courage to talk to him it would be very natural for him to talk to you." 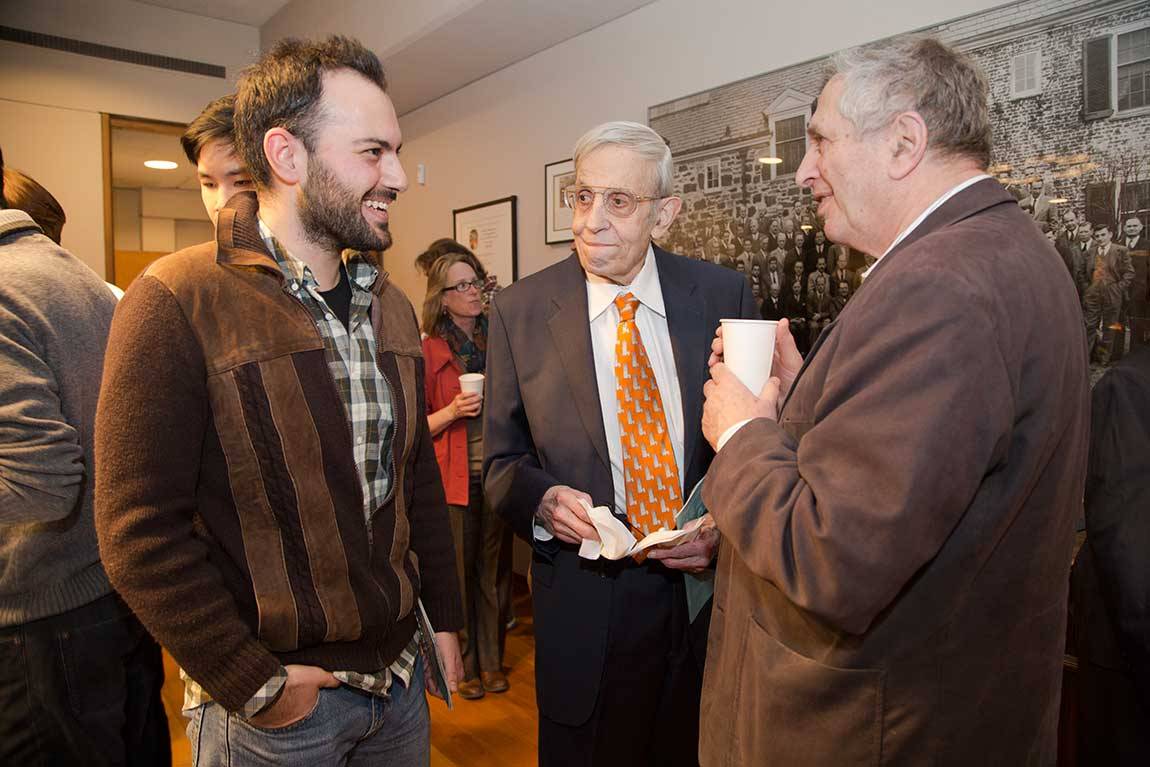 At 86, Nash (center) continued to inspire and work with younger researchers such as Michail Rassias (left), a Princeton visiting postdoctoral research associate in mathematics who was working on an upcoming book with Nash. Although 60 years Nash's junior, Rassias admired Nash's quick thinking and curiosity. This photo, taken during a special departmental reception in honor of Nash's winning the Abel Prize, includes Yakov Sinai (right), a Princeton professor of mathematics, who was awarded the 2014 Abel Prize. (Photo by Danielle Alio, Office of Communications)

Rassias has been inspired by the enthusiasm and willingness with which a person of Nash's stature dedicated months of his time to working with a young mathematician. It was an example Rassias hopes to emulate during his own career.

"Remembering what John Nash did for me, I will definitely try to give all my heart and soul to younger people in all steps of their careers," Rassias said. "I also will try to keep my mind and enthusiasm for math alive to the end. That is something I will try to achieve like him."

Born in Bluefield, West Virginia, in 1928, Nash received his doctorate in mathematics from Princeton in 1950 and his graduate and bachelor's degrees from Carnegie Institute of Technology (now Carnegie Mellon University) in 1948.

Nash is survived by his sister, Martha Nash Legg, and sons John David Stier and John Charles Martin Nash. He had his younger son, John Nash, with Alicia shortly after their marriage in 1957, which ended in divorce in 1963. They remarried in 2001.

Despite their divorce, Alicia, who was born in El Salvador in 1933, endured the peaks and troughs of Nash's life alongside him, Klainerman said. Their deaths at the same time after such a long life together of highs and lows seemed literary in its tragedy and romance, he said.

A memorial service for Nash will be planned at the University in the fall.