The Princeton-in-Washington Program is celebrating its 50th summer bringing together students studying or interning in Washington D.C., with alumni living in the area. This year's program runs June 17 to Aug. 1 and will feature a packed schedule of speakers, panel discussions and social events providing Princetonians an inside look at the political, cultural and social life of the nation's capital.

The program is organized by the Office of Career Services, the Office of Government Affairs and the Woodrow Wilson School of Public and International Affairs, with the alumni Princeton Club of Washington D.C.

Nearly 150 students and alumni recently attended the kickoff of the Princeton-in-Washington Program, which is celebrating its 50th summer bringing together students studying or interning in Washington D.C., with alumni living in the area. (Photos by Lisa Festa, Office of Career Services)

"I am so happy to be back in D.C. this summer and grateful to be part of the Princeton-in-Washington Program," said Loully Saney, Class of 2017. "This program helps students connect with each other as well as with alumni and others connected to the Princeton community here in D.C."

The highlight of the summer is a speaker series organized by a Princeton student coordinator featuring a diverse group of speakers from all branches of government, as well as major business and cultural centers. 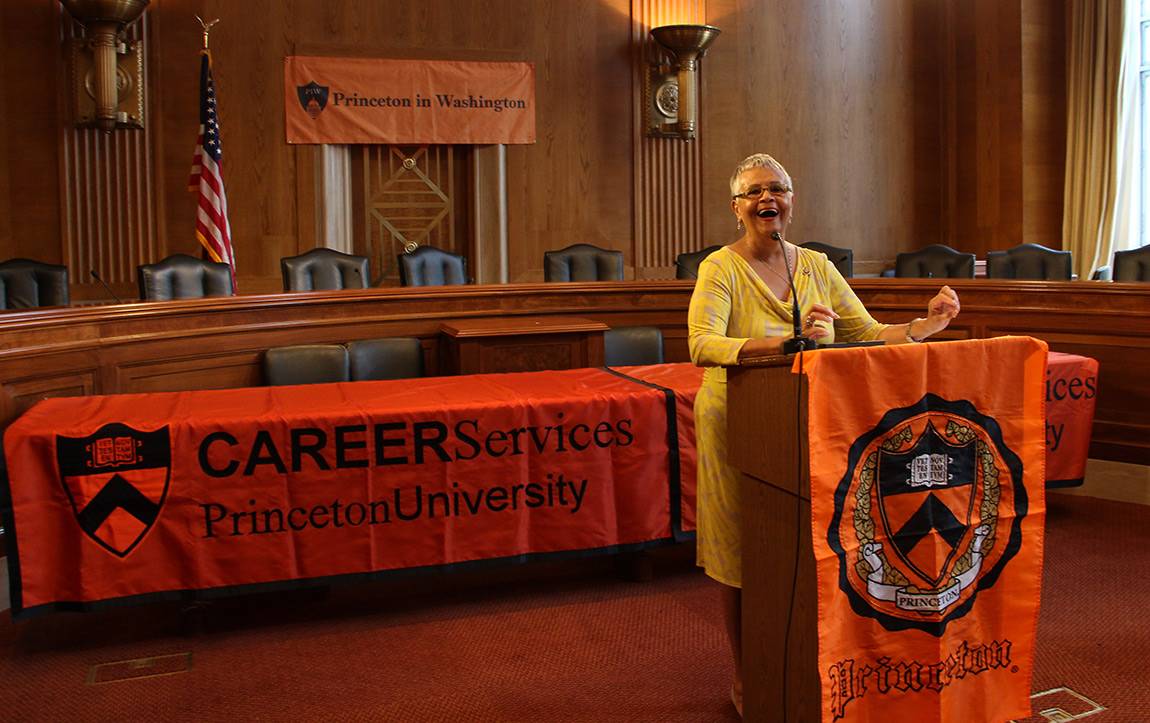 U.S. Rep. Bonnie Watson Coleman speaks at an opening reception for the Princeton-in-Washington Program. The program, which runs this summer June 17-Aug. 1, provides an inside look at the political, cultural and social life of the nation's capital.

At the opening reception and networking event in late June, U.S. Rep. Bonnie Watson Coleman, who represents the New Jersey district that includes Princeton, spoke about the importance of service. The event was hosted by U.S. Sen. Jeff Merkley of Oregon, who earned his master's in public policy from Princeton in 1982.

"Princeton-in-Washington offers some of our nation's brightest young minds exposure to government, public service and the democratic process through an outstanding and immersive experience in D.C.," said Watson Coleman. "I'm thrilled to host these impressive young people as they open their program. I'm confident that they will learn from and contribute to some of Washington's biggest discussions." 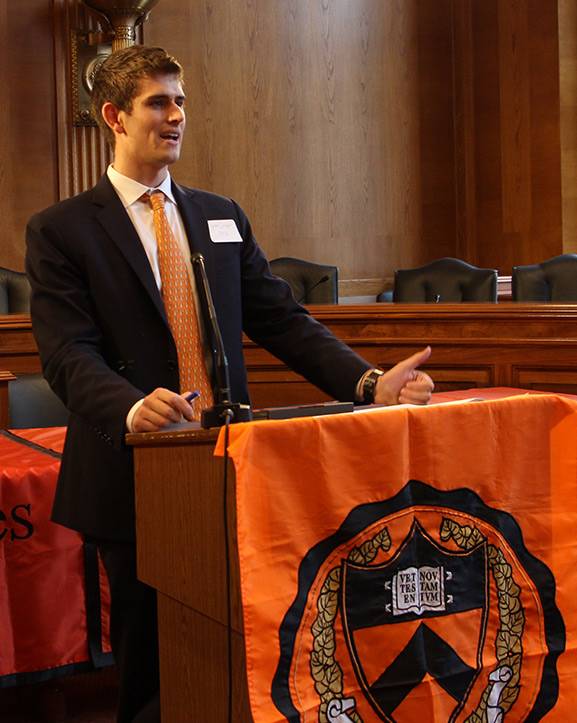 Justin Ziegler, a member of Princeton’s Class of 2016, welcomes alumni and students to the kickoff event. Ziegler is the student coordinator for this summer's Princeton-in-Washington Program and is organizing a full schedule of speakers, panels and social events with an emphasis on service-themed programs.

The program appeals to students and alumni with a range of career interests and from a variety of professions.

"What I think a lot of people don't realize is just how vast and diverse the positions in public service are and what kinds of backgrounds you can come from," said Class of 2016 student Michelle Molner. She explained that teams are often made up of people with a wide range of specialties, from statisticians to geologists to financial specialists and more. "It's a lot more expansive than just people who focus on policy," she said.

Adding new elements to the program this year, there are plans for panel discussions on health care and careers in service, as well as a symposium on poverty with a focus on the impact of education, housing, health care, social justice and employment.

"For the past 50 years, Princeton-in-Washington has been an integral component of the Princeton experience for countless undergraduates interning in the greater Washington metropolitan area," said Reggie Galloway, Class of 2011. "As an undergraduate, I had an amazing opportunity to interact with my peers while learning from dynamic and influential alumni. As current vice president of the Princeton Club of Washington, I am honored to help provide the current undergraduates with an incredible and memorable summer experience."

For Alex Fager, a member of the incoming Class of 2019, the program is providing an introduction to the Princeton experience.

"As soon as I got talking I found out that everyone was amazingly friendly, really willing to guide me on my way being an incoming freshman," Fager said. 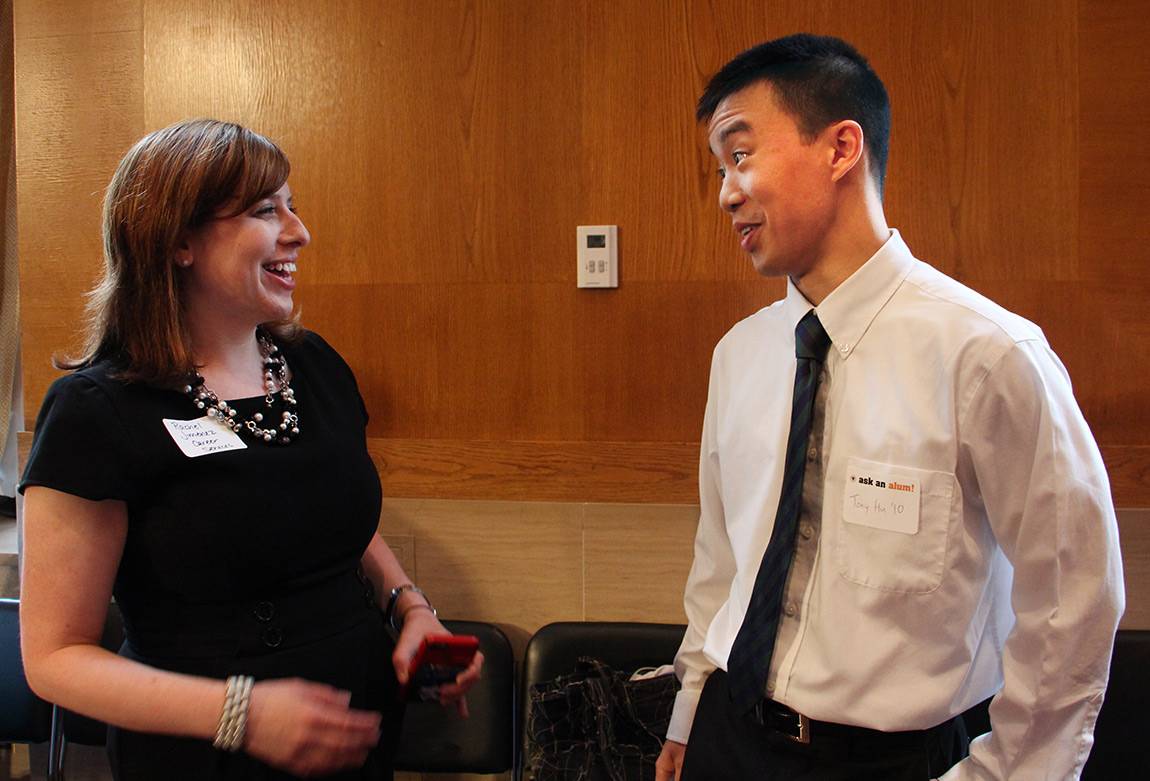 Rachel Jimenez, assistant director for student/alumni engagement programs at Career Services, and Tony Hu, a Class of 2010 graduate, mingle at the Princeton-in-Washington opening reception. The program is organized by the Office of Career Services, the Office of Government Affairs and the Woodrow Wilson School of Public and International Affairs, with the alumni Princeton Club of Washington D.C.