When it comes to global warming, most people worry about power plants. Claire White thinks about another kind of plant — those that make cement.

"Cement production and cement powder are a major component of greenhouse gas emissions," said White, an assistant professor of civil and environmental engineering and the Andlinger Center for Energy and the Environment at Princeton University. "It accounts for between 5 and 8 percent of human-made carbon dioxide."

Along with co-researchers from across the University, White is exploring ways to manufacture cement with a much lower contribution to global warming. Some of these cement substitutes completely eliminate the need to burn limestone at high temperature, a critical step in standard cement production that accounts for much of the CO2 emissions. By using waste components such as slag from steel manufacturing instead of cement powder, manufacturers can cut greenhouse emissions by 80 to 90 percent, White said.

"To make conventional cement, you need to dig raw materials out of the ground and heat them to very high temperatures. You are essentially driving off CO2 molecules," she said. "These alternate forms of cement — called alkali activated or geopolymer cements — either use byproducts from industrial processes or use entirely different methods to create the end product." 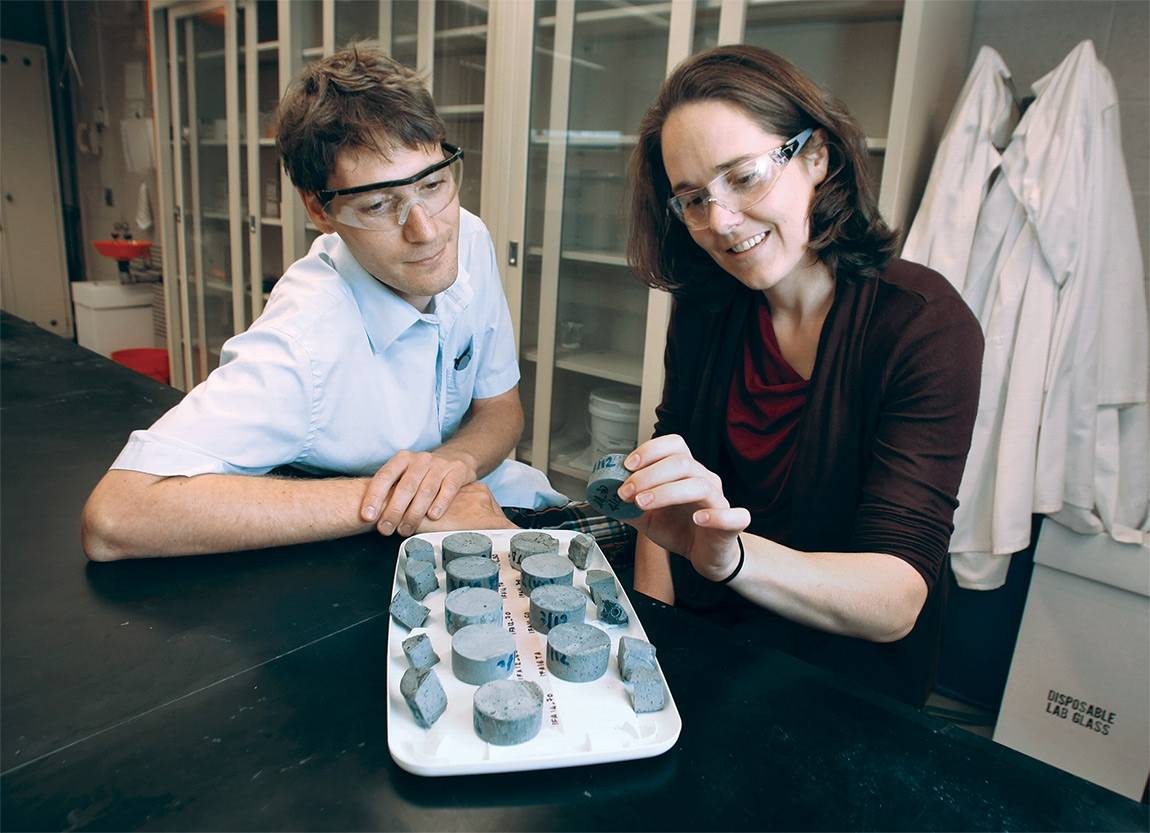 Claire White (right), assistant professor of civil and environmental engineering and the Andlinger Center for Energy and the Environment, worked with postdoctoral research associate Antoine Morandeau to invent ways to produce cement with a much lower contribution to global warming. (Photo by Frank Wojciechowski for the Office of Engineering Communications)

Cement mixed with water creates the binding agent, which forms concrete when other materials are incorporated, including crushed rock and sand. As a basic building material, concrete with some similarities to today's material has been used for thousands of years in structures such the Pantheon in Rome and the Guggenheim Museum in New York. Today, concrete is the second-most used resource by volume worldwide after water.

White began studying low-carbon versions of cement as a graduate student at the University of Melbourne in Australia. A research team there was studying the durability of alternate forms of cement, and turned to the former Soviet Union for field research. The Soviets had built a number of structures using a type of cement that relies on slag, a byproduct of steel production, as a substitute for limestone.

"For the Soviets it was a cost and material supply issue," White said. "The researchers examined structures built between 1964 and 1982. From a visual standpoint, they are still quite sound."

Although that is an encouraging sign, it is not necessarily proof of the material's durability. Many of these materials, called alkali-activated cements, have been around for years, but the idea of using them in widespread production to reduce greenhouse gas emissions is relatively new. The problem is that cement lasts so long that construction standards demand decades of reliability.

"Even with regular concrete formulations being employed today, you don't have an extensive historical database," said Dale Bentz, a chemical engineer with the National Institute of Standards and Technology who specializes in cement research. "It is even more difficult for the new materials."

Bentz said one challenge in evaluating possible new cements is simulating the decades of wear and variety of environmental conditions that concrete structures face. To do that, scientists can conduct experiments in which they subject concrete samples to simulated aging, or they can construct computer models to simulate aging in the concrete.

"You have to be careful that you are not changing the underlying chemistry," White said. "We can bump up the concentration of chemicals responsible for degradation. But the difficult thing is trying to make sure you are replicating natural conditions." 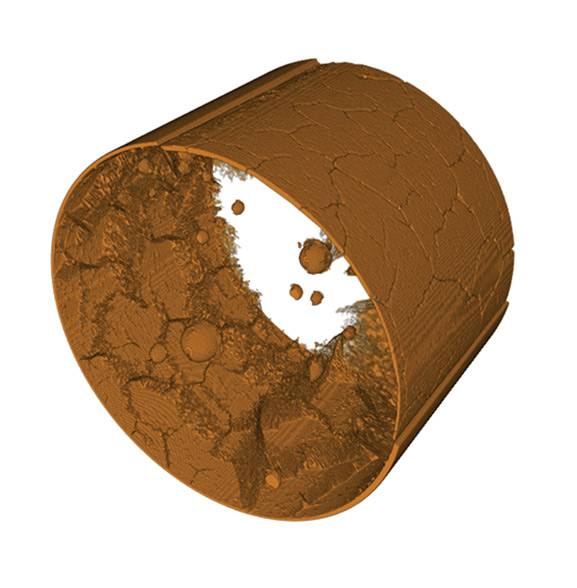 An X-ray image of a cement sample shows small cracks that formed as it dried. Research funded by the Princeton E-ffiliates Partnership Fund has revealed ways to reduce this cracking in new generations of cement that are less environmentally damaging. (Image courtesy of Claire White, Department of Civil and Environmental Engineering and the Andlinger Center for Energy and the Environment)

One of White's projects, supported by the Andlinger E-ffiliates Partnership Fund, involves using X-ray tomography to study methods for eliminating tiny cracks that develop as some of the alternative cements dry. These micro-cracks, some of which are invisible to the naked eye, can weaken concrete over the long term. White's team has been working to understand their development and propose efficient ways to minimize the cracking.

"We found that by adding really small quantities of zinc oxide nanoparticles, the crack density at the cement surface is reduced," she said.

White's team also is developing models to simulate aging on a variety of cements. The goal, she said, is to rapidly evaluate weaknesses that emerge as concretes age and to propose solutions. While laboratory experiments can be extremely effective, modeling would allow researchers to test new methods more quickly.

"We don't have data indicating how well they will last for 50 to 100 years," she said. "This is an area in which university research is ideal," she said. "We have the ability to take a longer view."