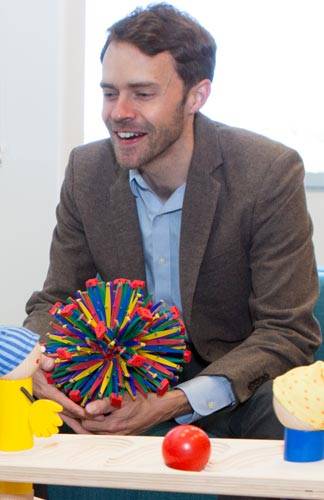 The Princeton Baby Lab is always looking for families to participate in research studies, which include children from birth to 5 years old. Studies are designed to be fun and engaging for children, who are always accompanied by a parent. Appointments are usually 30 to 45 minutes long. For more information, visit the lab's website.

The Princeton Baby Lab is always looking for families to participate in research studies, which include children from birth to 5 years old. Studies are designed to be fun and engaging for children, who are always accompanied by a parent. Appointments are usually 30 to 45 minutes long. For more information, visit the lab's website.

Casey Lew-Williams, an assistant professor of psychology at Princeton, has a doctorate in developmental psychology from Stanford University and a growing list of academic publications that focus on the ways young children's experiences and cognition interact to shape their learning — and their future.

Another important qualification for his work: he knows what it takes to make fast friends with the infants, toddlers and preschoolers who make up his research participants. 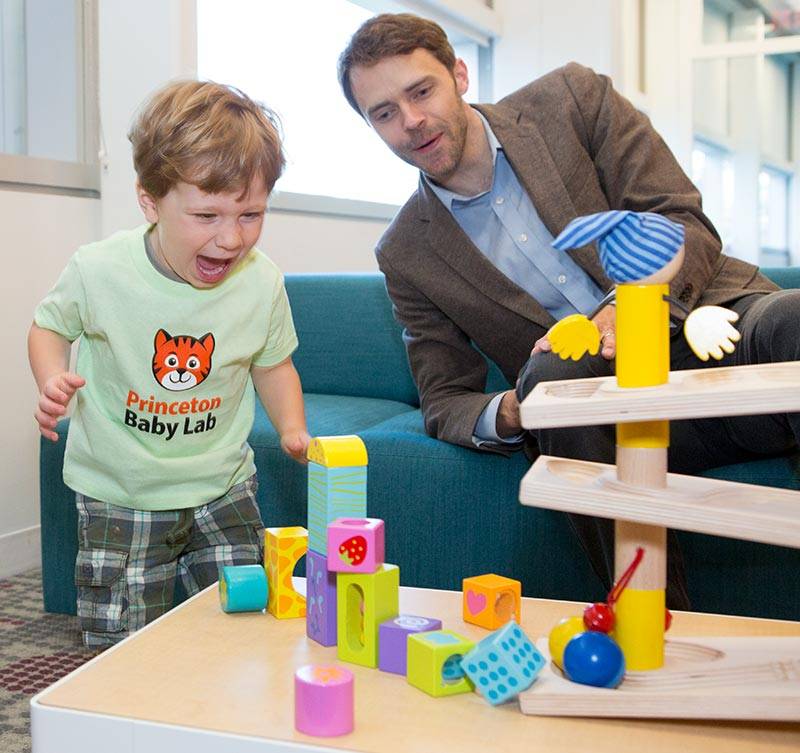 As Lew-Williams looks on, Ezra Cayton-Hodges celebrates using a rolling ball to knock over a block tower in the reception area at the Princeton Baby Lab in Peretsman Scully Hall.

On a recent day, he quickly got down on one knee to meet a toddler, Ezra, at eye level. With an easy smile and bright eyes, he coaxed Ezra to ease his grip on his dad to come and play with a ball ramp. Soon Lew-Williams and Ezra were both laughing as they figured out how to use the speeding balls to knock over a block tower.

Putting children at ease helps set the stage for the brief, fun experiments that have helped Lew-Williams understand what's happening in the minds of young children like Ezra, or even babies a few months old.

"The gears are really turning," Lew-Williams said. "There are powerful learning mechanisms that young children possess that allow them to learn about language and patterns and categories and events and things happening in their lives."

"The most fundamental, basic science questions I'm interested in are what is learning, how does it happen and how does it happen differently for different children?" Lew-Williams said. "To me, language is a great way to investigate this because language is such an important skill. How does language learning get off the ground in infancy?"

Lew-Williams takes the answers to those questions that he discovers in the lab into the classroom at Princeton and into the field as part of efforts to help at-risk children.

Lew-Williams traces his interest in language learning to elementary school, when he participated in an early experiment in Spanish-language immersion education in Davis, California.

"I had barely heard a word of Spanish before kindergarten and then most of my elementary education was in Spanish beyond that," Lew-Williams said. "I feel lucky to have grown up in an open-minded community that values a broad education."

He earned a bachelor's degree in developmental psychology at the University of California-Berkeley before going to graduate school at Stanford. He joined the Princeton faculty in 2014 after three years as a postdoctoral researcher at the University of Wisconsin-Madison and two years as an assistant professor at Northwestern University.

Adele Goldberg, a professor of psychology, is working with Lew-Williams as part of a new group at Princeton examining emergent communication and language sciences.

"Casey is doing exciting and very valuable research into various factors that facilitate (or hinder) first- and second-language learning," Goldberg said. "I'm ecstatic to have Casey here to strengthen the focus on language from a psychological perspective."

Lew-Williams co-directs the Princeton Baby Lab with Lauren Emberson, an assistant professor of psychology who joined the faculty Sept. 1. The brightly decorated lab in Peretsman Scully Hall, which opened this summer, hosts a range of research that examines how babies and young children learn to see, talk and understand the world.

"It is a vibrant, contemporary lab for doing developmental research," Lew-Williams said. "By having two faculty members involved, the students who are working in the lab will get exposure to lots of different methods, ideas, motivations and theories in developmental psychology." 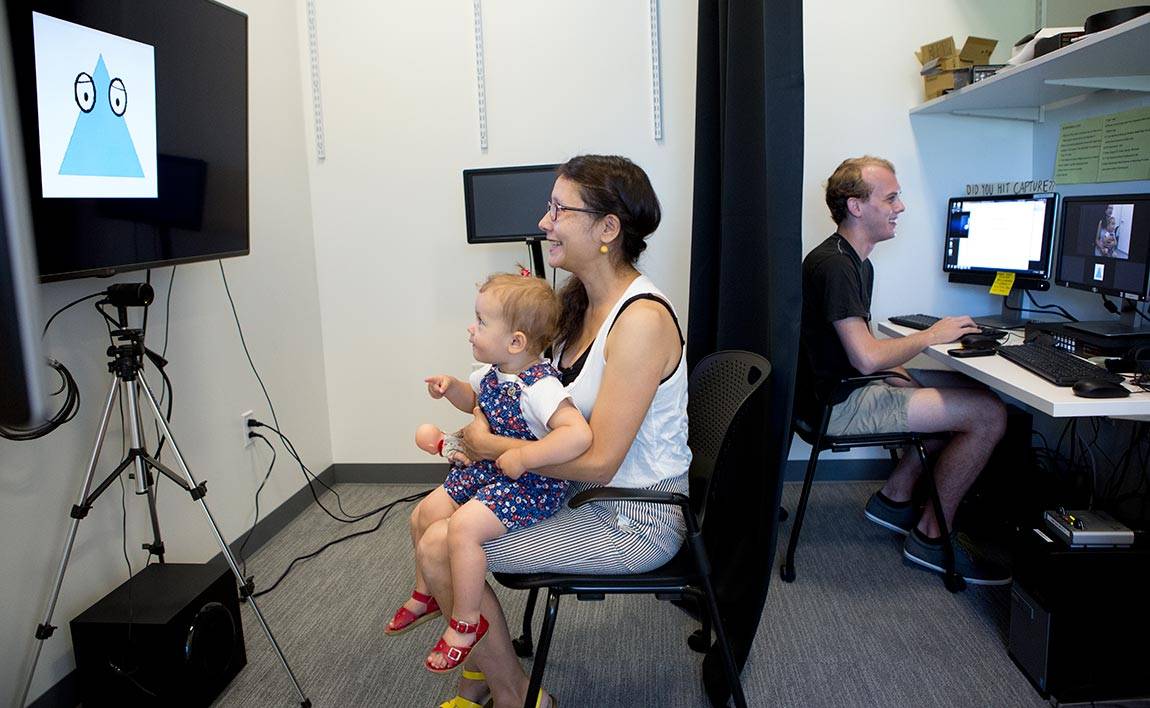 Clara Mas sits on the lap of her mother, Rebecca Rainof, during a demonstration of an experiment at the Princeton Baby Lab. Research assistant Nick Tippenhauer, a member of the Class of 2016, controls the experiment from behind a curtain.

While the youngest children aren't able to say what they're thinking, Lew-Williams can get an idea of how they learn just by watching where they turn their gaze.

In one type of experiment, an 18-month-old might be shown pictures of a ball and a car. When a voice asks "Where's the ball?" the child's gaze will usually move toward that image. How quickly the child shifts its gaze from the car to the ball offers clues to learning and processing.

"It turns out that individual differences in how quickly you do this very simple task are important," Lew-Williams said. "It's a window into early information processing. Your speed at finding the referenced item in a simple sentence when you are 1 or 2 actually predicts your language and cognitive outcomes at age 8."

Another question for Lew-Williams is how babies begin to find structure in language.

"To them, language is nothing but this continuous stream of sounds, syllables and maybe these things called words," Lew-Williams said. "They are exposed to this bombardment of auditory perception synchronized with visual events, and they have to figure out what's going on. At first, they know very, very little, but through experience they start to extract structure."

To gain insight into this process, Lew-Williams plays several minutes of Spanish or Italian to babies learning English, and sometimes he exposes them to artificial, "alien" languages. The babies then hear individual words from the language. Based on how groups of babies respond, Lew-Williams can assess whether they have identified that sequence of sounds as a word.

"It turns out infants have this prodigious ability to figure out what sounds are most likely to follow the next sounds, almost like they are these little pattern detectors," he said. "They are able to perform what you might call computations over the information coming their way, almost like a statistician. This ability to see patterns between things is giving rise, initially at least, to language and to the detection of how events work." 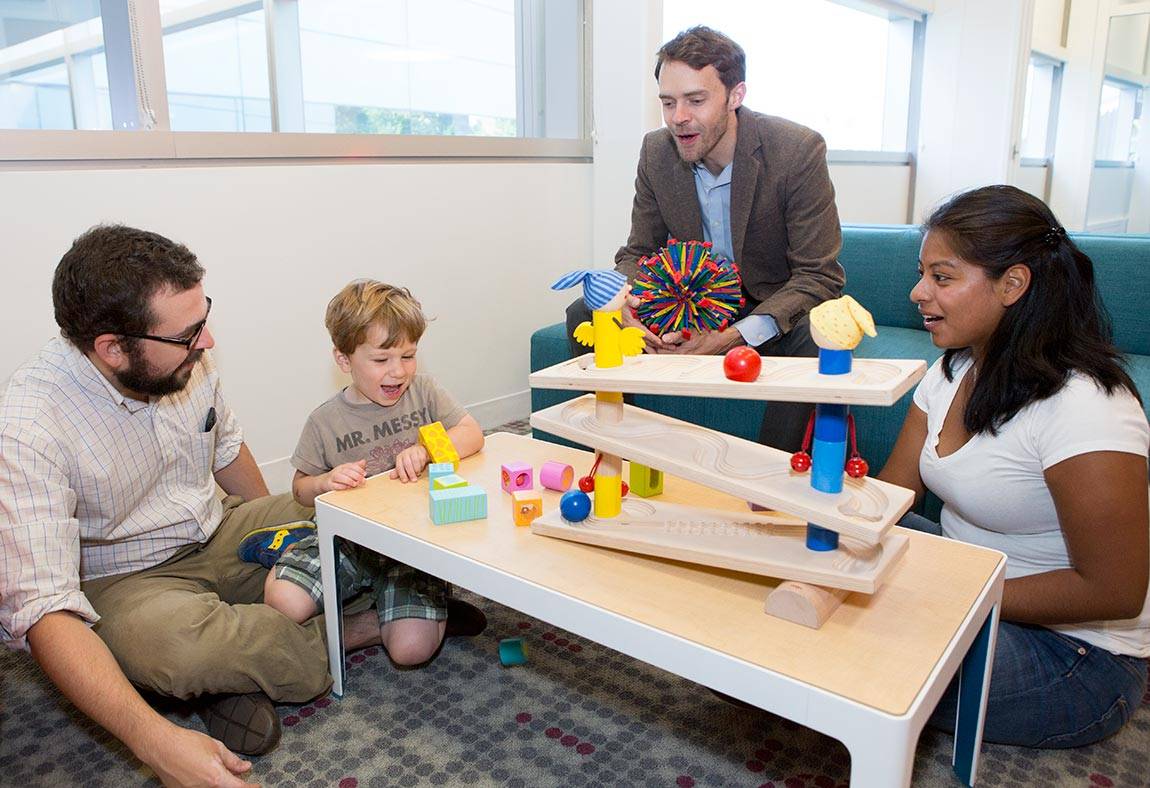 Ezra plays in the reception area at the Princeton Baby Lab with his father, Jonathan Hodges (left), Lew-Williams and research specialist Maritza Gomez.

Lew-Williams works closely at the Princeton Baby Lab with lab assistants, postdoctoral researchers, graduate students and undergraduate research assistants. Lessons from the lab reach a much broader audience, though, through his teaching and advising.

One of the undergraduate courses he teaches regularly, "Developmental Psychology," offers an overview of development, maturation and learning in the first years of life.

"I basically walk students through theories of learning and development," Lew-Williams said. "I use landmark studies from the last several decades in particular to highlight these broader themes, and I also make an effort to tackle questions that are likely to be relevant to students, such as current controversies about early child development."

Lew-Williams said the course offers insights that are valuable to students whether or not they study psychology further.

"The course serves as a window into what it means to be human and why you do what you," he said.

He also teaches a seminar course, "Developmental Origins of Life Outcomes," that examines the importance of the first 1,000 days of life in setting the stage for the rest of life. The course ties in closely to Lew-Williams' research and interest in the importance of the first years of life, while also discussing work from a wide range of fields. In addition, students last academic year reached out into the community, working through the University's Community Based Learning Initiative to connect with central New Jersey nonprofit groups that work with young children.

One group led a book-reading workshop for recently incarcerated fathers. Another created a program to get parents more involved with a preschool that serves homeless children. A third helped the Kidsbridge Tolerance Museum research ways to extend its anti-bullying message to younger children.

"As a small not-for-profit, this is something we probably just would not be able to do without their help," said Lynne Azarchi, executive director of Kidsbridge. "The students were so enthusiastic and really got our mission. Having this research and sharing it with educators is exciting and incredibly useful."

Schatz, who conducted a study investigating how and when children learn lessons from educational stories they read, hear and watch, said Lew-Williams proved to be an ideal mentor.

"He provided exactly the kind of support I needed, drawing my attention to certain details of the study, of data analysis and of writing the thesis itself but always remaining very positive and helping me feel my study was truly unique and exciting," Schatz said.

Lew-Williams also focuses on what his research means for children outside his lab.

"Differences between children in early learning matter for a lifetime," Lew-Williams said. "The science is showing that the first 12 to 36 months of life are absolutely vital. My motivation is to try to understand how experiences differ for children and how they give rise to different learning trajectories."

Through the Thirty Million Words Initiative — named for the gap in words heard by children in wealthy and poor families by the time they reach kindergarten — Lew-Williams is taking part in a five-year project on the South Side of Chicago that is designed to help poor families improve learning outcomes for their children. The 200 families in the program will get instruction in early cognition and language development, as well as the importance of reading books to children.

Lew-Williams is also planning to conduct research in Trenton, New Jersey, that focuses on children being raised in bilingual homes.

Those projects are efforts to answer some of the many unanswered questions about the young mind.

"Language learning is still very mysterious," Lew-Williams said. "We're still figuring out how this vast complexity can be learnable for children. We're starting to have the tools, capacity, theories and collection of interests from different fields to be able to figure it out."