Every day, people act in response to countless external stimuli, activities in the outside world that result in a specific behavior. An oncoming car causes a pedestrian in a bustling city to jump back to the curb. Someone tells a joke that makes you laugh. You call someone's name causing that person to stop and turn around.

Though seemingly instantaneous, our responses to life's many sights and sounds are the result of neural pathways that select the information that ultimately determines our behavior. For instance, the pedestrian doesn't step back to the curb for all moving vehicles, just the one heading toward him.

How the brain identifies behaviorally useful — or ethologically relevant — information and then translates it into action has been difficult to understand. However, one of the most complete insights into this process may now have come from the tiny, relatively simple brain of the fruit fly (Drosophila melanogaster), according to a study published in the journal Neuron.

Princeton University researchers tracked the neural activity of female fruit flies being courted by males to capture the process through which an outside stimulus causes a change in behavior. They monitored the brain cells in the female's auditory pathway and could observe her neural activity from the moment a male caught her interest to when she decided to potentially mate. 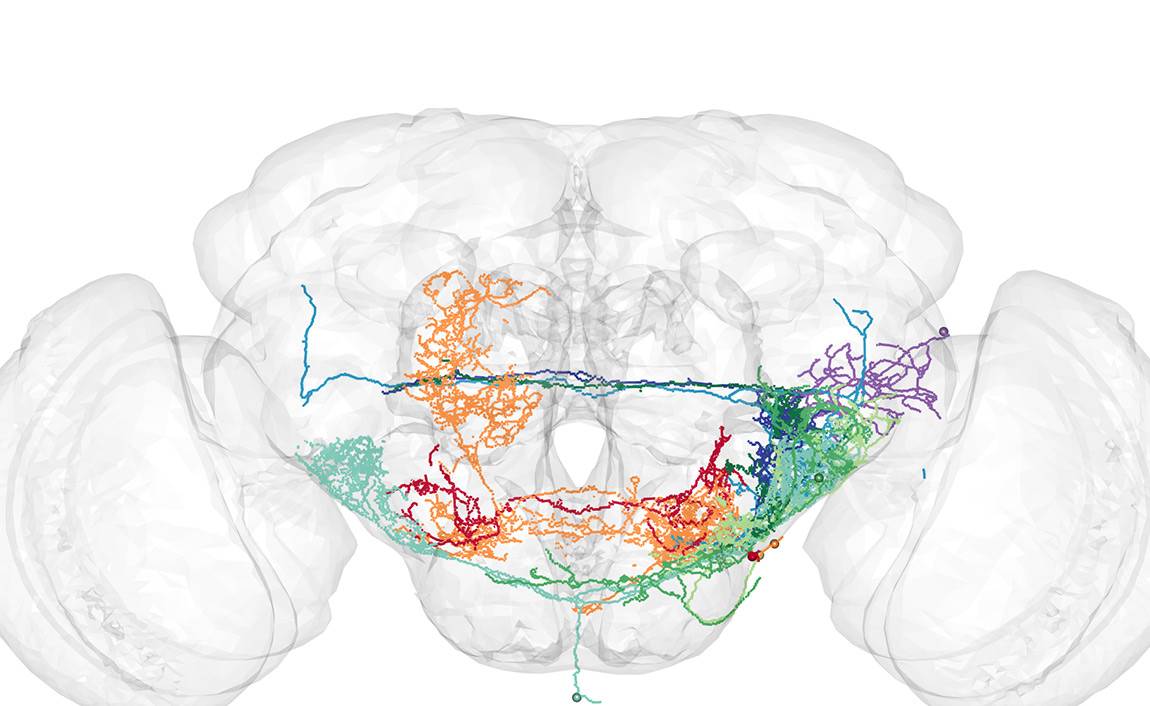 Princeton University researchers used fruit fly brains to capture the process by which the brain identifies behaviorally useful information in the external environment and uses it to determine our actions. They attached small electrodes to individual neurons in the auditory pathway of a female fly's brain to record electrical activity as she heard male mating songs, which the male generates by vibrating his wings. A diagram of the fruit fly brain (above) highlights the structure of all seven of the brain neurons included in the study, with different colors corresponding to different neurons. Despite the great diversity in neuron structure, all neurons had very similar responses to male fly songs. (Image by Jan Clemens, Princeton Neuroscience Institute)

A male fruit fly gains his potential mate's attention via a "song" he generates by vibrating his wings. The pursued female runs from the male, but when she hears a song she likes, she will slow down to let the male approach.

Through their study, the Princeton researchers are the first to report the specific song characteristics that prompt a female fruit fly to change her behavior. Females respond to longer song "bouts," or segments, that are tens of seconds in length. The researchers used these behavioral data along with electrical recordings from neurons in female flies' auditory pathway to construct a computer model of the fruit fly brain that correctly predicted the song length that females would respond to.

These results provide a clear and relatively simpler diagram of the stimulus-to-behavior neural process frequently carried out by more complicated brains such as that in humans, explained Mala Murthy, a professor of molecular biology and the Princeton Neuroscience Institute. The fruit fly brain contains roughly 100,000 neurons, compared to the roughly 100 billion the brain of the average adult human contains. Fruit fly brains are commonly studied in neuroscience because the timing and function are similar to more advanced brains, but at a scale that is much easier to observe.

The researchers are the first to determine the specific features of a male fruit fly mating song that prompt a female to potentially mate. By observing how female neurons responded to male songs (above), the researchers found that females respond to longer song "bouts," or segments, that are tens of seconds in length. Sensitivity to the longer song segments likely allows the female fruit fly to make a determination about a male's fitness based on his ability to consistently produce long song bouts. This is similar to how a person accumulates information over a period of time to make a decision.

The researchers are the first to determine the specific features of a male fruit fly mating song that prompt a female to potentially mate. By observing how female neurons responded to male songs (above), the researchers found that females respond to longer song "bouts," or segments, that are tens of seconds in length. Sensitivity to the longer song segments likely allows the female fruit fly to make a determination about a male's fitness based on his ability to consistently produce long song bouts. This is similar to how a person accumulates information over a period of time to make a decision. (Audio-video file by Jan Clemens, Princeton Neuroscience Institute)

Relevant to humans and other creatures is the researchers' finding that the fruit fly brain uses particular patterns to recognize external stimuli that in turn affect behavior, Murthy said. Sensitivity to the longer song segments likely allows the female fruit fly to make a determination about a male's fitness based on his ability to consistently produce long song bouts, she said. This is similar to how a person accumulates information over a period of time to make a decision. There has been little work in the past indicating that insects had this capability — instead it was thought to be "the domain of more complicated brains," Murthy said.

"We don't yet understand how the human brain performs this kind of pattern recognition," Murthy said. "Being able to solve this in any system is useful. It lets us look at neural activity from a pattern in the environment all the way through to an organism's behavior.

"Right now, a neural prosthetic to rescue perceptual function in individuals with disorders that affect communication and perception does not exist," Murthy continued. "Therefore, understanding how a brain with far fewer neurons can accomplish pattern recognition on timescales relevant for human speech perception, for example, could provide a foundation for the development of this kind of technology."

Understanding the neural processes by which a person behaves in response to activities in the outside world is a major aim of the federal BRAIN (Brain Research through Advancing Innovative Neurotechnologies) Initiative announced in 2013, which is intended to map the activity of all the brain's neurons. The research in Neuron was supported in part by a BRAIN Initiative grant to Murthy from the National Science Foundation (NSF).

"For me it's exciting to take something very complicated and start to chip away at the problem to find the neurons that are relevant, to make these links," Murthy said. "We want to know how the brain solves problems, generates behaviors and interacts with the world. That's what we've started to do here. I think it's inherently exciting."

The study is among the first conducted with any creature to capture brain activity associated with natural social behavior, said co-first author Jan Clemens, a postdoctoral research associate in Murthy's laboratory. Clemens and Murthy worked with co-first author Cyrille Girardin, a past postdoctoral fellow in Murthy's group who is now a grants specialist at Fribourg University in Switzerland; Pip Coen, who received his Ph.D. in neuroscience from Princeton in 2015 and is a postdoctoral research fellow at University College London; Xiao-Juan Guan, a senior research specialist in the Murthy lab; and Barry Dickson, a researcher at the Howard Hughes Medical Institute's Janelia Research Campus in Virginia.

"It is a difficult problem for two main reasons. First, it is not often known what features of the sensory environment are ethologically relevant," he said. "Second, linking both natural sensory signals and natural behavior with neural codes typically requires systematic recordings from an animal behaving in its natural sensory environment, but for reasons of technical difficulty, this is rarely accomplished."

Female fruit flies behave in response to male songs — that's the natural, ethologically relevant behavior. Knowing that, the Princeton researchers also had to capture the female fly's neural activity as she heard the song. To do this, they attached extremely small electrodes to individual neurons in the early auditory pathway of a female fly's brain to record electrical activity as they played male songs to her. The researchers built computational models of these neural responses, then used these models to examine responses to roughly 4,000 minutes of natural courtship songs they had recorded. This allowed the researchers to accurately predict how a female fly would behave when she heard songs of the optimal length.

In a review of the research published in Neuron, graduate student Rich Pang and Associate Professor Adrienne Fairhall, both in computational neuroscience at the University of Washington, wrote that the Princeton researchers demonstrate how to "transcend" the difficulty of recording natural behavior in a laboratory environment. The work provides a promising method for exploring the sensory influence of other fruit fly behaviors such as the direction in which the female moves.

"The recent work," Pang and Fairhall wrote, "provides great encouragement that the neural substrates that govern such sensory-driven decisions will be decodable."

A video about the Murthy group's work on fruit flies related to the BRAIN Initiative is available through the NSF.

The paper, Connecting Neural Codes with Behavior in the Auditory System of Drosophila," was published Sept. 23 in the journal Neuron. The work was supported by NSF CAREER and BRAIN Initiative EAGER awards; a National Institutes of Health New Innovator award; the German Academic Exchange Foundation (DAAD); a Marie-Curie International Research Fellowship; the Alfred P. Sloan Foundation; the Human Frontiers Science Program; the McKnight Foundation; and the Klingenstein Foundation.