Princeton has a long connection with the NEH: 50 years ago, Sen. Claiborne Pell of Rhode Island, a 1940 alumnus who graduated with a degree in history, was a prime sponsor of the legislation that led to the establishment of the NEH and the National Endowment for the Arts. Pell, who died in 2009, also helped establish the eponymous college grant program.

At Princeton, the NEH has provided funding for scholarship in many areas, including Firestone Library, the Princeton University Art Museum, the Center for African American Studies, and the departments of classics, East Asian studies, English, history, music and philosophy. 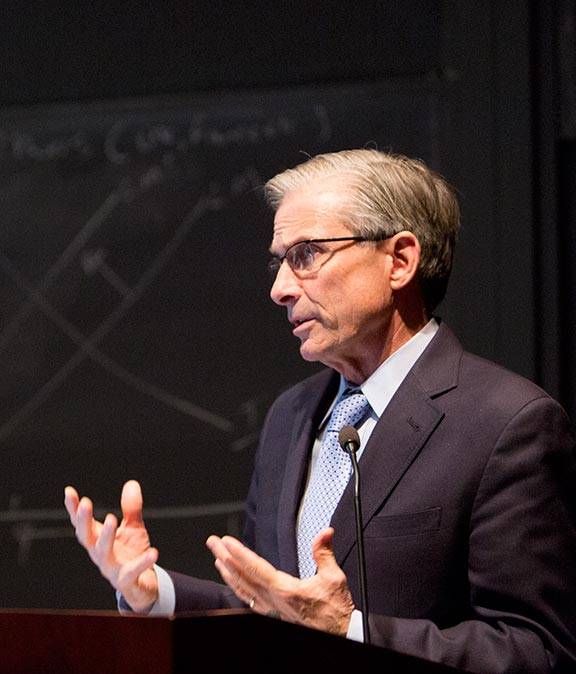 The panel in McCormick Hall touched on several significant avenues of humanities funding at Princeton including the comprehensive editions of The Papers of Thomas Jefferson, also made available in electronic form; the Blue Mountain Project, a digital repository of avant-garde periodicals; and the Jane Austen's Cults and Cultures Project.

The speakers, including Denis Feeney, the Giger Professor of Latin and chair of the Council of the Humanities, who introduced Adams, underscored the importance of public humanities programming.

"One of our purposes in arranging this event was to do some consciousness-raising and education about the role of the NEH," said Feeney. "I think it'll be a surprise to most of you to learn about the enormous range of activities that the NEH has made possible over the years, in our University, in our community, in our state and in the country at large."

Feeney said that in addition to Pell, there are other University connections to the NEH. Former Congressman Jim Leach, a 1964 alumnus, was chairman of the NEH immediately before Adams, and New Jersey Congressman Leonard Lance, who earned his MPA from the Woodrow Wilson School in 1982, recently became co-chair of the House Humanities caucus.

"As everyone in the room knows, this is an important time to be thinking about the role of the humanities in the nation's life," Feeney said.

Feeney said Adams "has already had a real impact as an eloquent advocate for the cause of the humanities."

With a photo of President Johnson signing the NEH bill projected on a screen, Adams gave a brief history of the agency. During the last five decades, NEH has made approximately 63,000 grants, totaling $5.3 billion, which have supported some 29,000 research fellowships for humanities scholars; roughly 1,900 film, television and radio documentaries; 5,280 grants for the preservation of humanities materials, collections and resources; more than 4,000 seminars and institutes for nearly 85,000 college faculty and high school teachers; and hundreds of capital gifts to museums, libraries, historical sites, and colleges and universities in every part of the country.

"Pell believed fervently that the work of NEH must have a public aspect," said Adams, the 10th chairman of the NEH, who was president of Colby College from 2000-14. 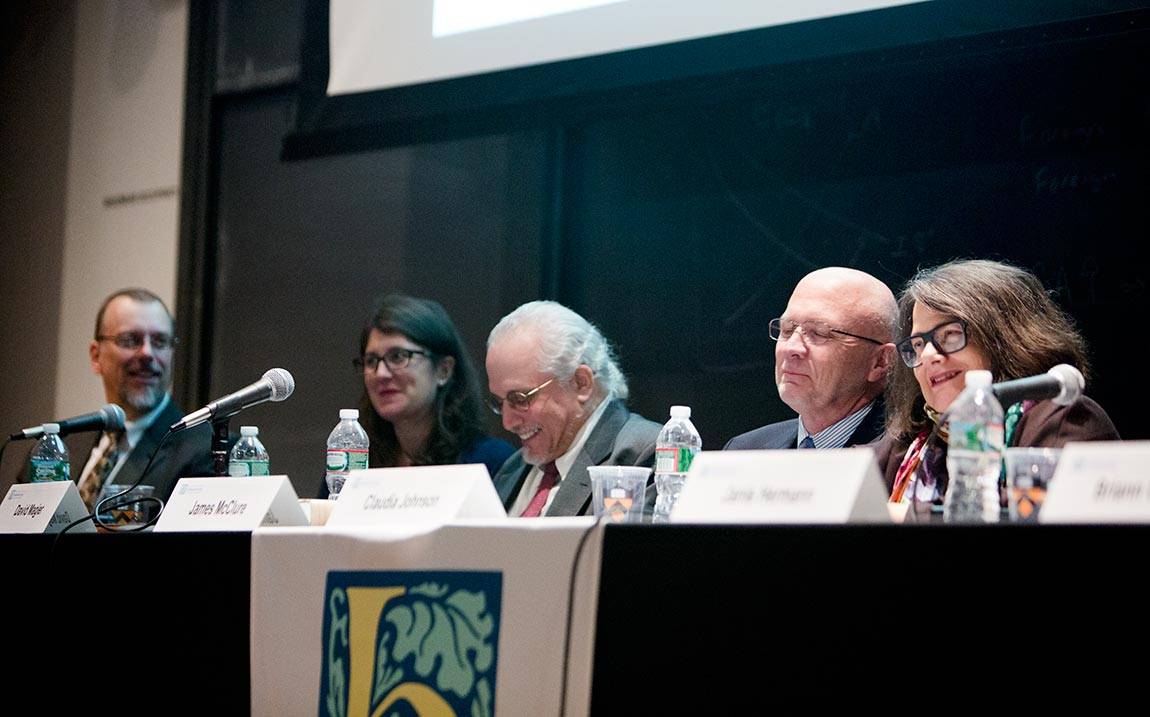 The panelists enjoy a lighthearted moment during the discussion. From left are Princeton faculty and staff members Clifford Wulfmann, director of the Blue Mountain Project and coordinator of University Library Digital Initiatives; Meredith Martin, director of the Center for Digital Humanities and associate professor of English; David Magier, associate university librarian for collection development; James McClure, general editor of The Papers of Thomas Jefferson; and Claudia Johnson, the Murray Professor of English Literature.

In part as a result of the work of NEH, the humanities infrastructure of the United States has grown impressively over the past five decades, Adams said, and there are now more than 35,000 museums in the United States. "According to the American Alliance of Museums, these institutions attract approximately 850 million visitors every year, which exceeds attendance for all professional sporting events and theme parks combined," he said, to laughter and applause from the audience.

Expounding on the continued efforts of the NEH to fund a broad array of projects and initiatives in academia and the public sector, Adams said: "The grand challenges of our times appear at the intersections of our history, our culture, our ideas and our values. These are the domains in which the humanities have their greatest power and authority, and these are the domains in which we need much more of the imaginative, moral and intellectual capacity embedded in humanities work.

"We need the humanities now more than ever because they give us access to the most fundamental and consequential dimensions and forces of our experience," he added.

"We must continue to work to democratize access to the humanities," said Briann Greenfield, executive director of the New Jersey Council for the Humanities, a state partner of the NEH.

She said Pell pushed for state councils as a way to bring humanities scholarship to the public through grants and direct programming. "We need humanities programming that bridges cultural and class divides," she said, citing the Literature and Medicine program, "which uses poetry, literature and film as a way to spark discussions and cultivate empathy and cross-cultural sensitivity" among medical professionals.

Janie Hermann, the public programming librarian at the Princeton Public Library, spoke of the library's mission to serve as "the community's living room." In an overview of how NEH funding has helped the library establish humanities-based programming, Hermann talked about the Spotlight on the Humanities, which features six to eight lectures during the academic year, held over the lunch hour and chaired by Stanley Katz, a lecturer with the rank of professor in public and international affairs, Woodrow Wilson School of Public and International Affairs. Noting the impact of the program, Hermann told the story of a World War II vet who attended the program and was inspired to audit a philosophy course at the University.

"I'm here as an object lesson in how the NEH supports individuals," said Claudia Johnson, the Murray Professor of English Literature at Princeton, who spoke on how NEH funding supported research for her book "Jane Austen's Cults and Cultures."

As she pored over newspapers, letters, magazines and ephemera of all sorts, Johnson discovered that soldiers during both World Wars were reading Austen novels. "I wrote about the hold Jane Austen had on readers during wartime," said Johnson. "There was a secret reading club along the Western front during World War I. Austen served as a 'clean, well-lighted place' in the trenches.

"As a humanist to the core, I'm struck by the simple fact that people love literature and literature as a therapeutic power," Johnson said. "When I read aloud in the classroom, students listen with rapt attention, with widened eyes and open mouths. If we're worried about the humanities, literary love seems like a good place to start." 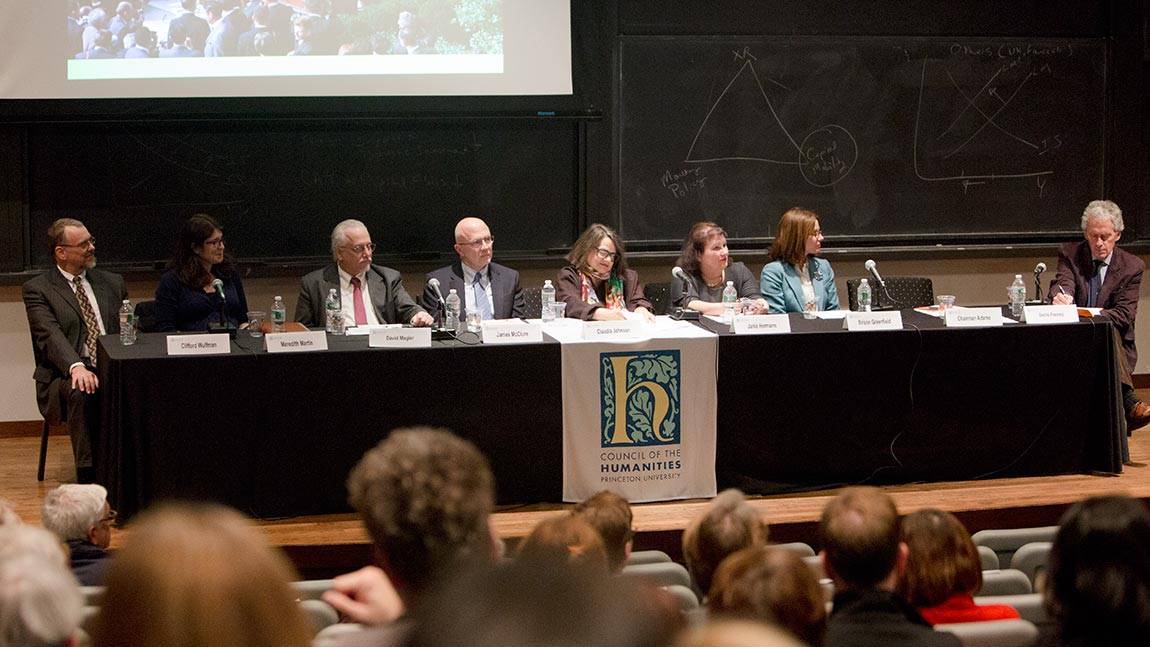 The panelists spoke on a wide range of topics, and, along with those at the University, included Janie Hermann (third from right), public programming librarian at the Princeton Public Library, and Briann Greenfield (second from right), executive director of the New Jersey Council for the Humanities. The event was moderated by Princeton's Denis Feeney (right), the Giger Professor of Latin and chair of the Council of the Humanities.

James McClure, project director of The Papers of Thomas Jefferson and a senior research historian, touched on the role the NEH plays in longer-term scholarly endeavors. He said NEH funding came at a critical juncture in the decades-long project, when it was clear the project would be multigenerational in terms of leadership and staff.

McClure said NEH funding helped expand the editorial team and the scope of its translation of foreign language documents, as well as the creation of an electronic edition as well as printed volumes.

David Magier, associate university librarian for collection development, discussed the cultural preservation of the Zaydi Community Archives in Yemen, a digitization project of some 50,000 manuscripts from the eighth century onward that encapsulate the civilization of the Zaydi community.

Many of these manuscripts, which resided in private family libraries, museums and local libraries, are endangered or have been destroyed because of differences in ideological view, said Magier.

With NEH funding and other joint funding, librarians have received special training to use high-end equipment and travel to Yemen to "rescue" these manuscripts digitally. Often, the librarians are working under extremely dangerous conditions — at times with tear gas being literally thrown through the windows of the libraries. "Imagine how I felt when I held that hard drive so we could put it up on the Web and make it accessible to scholars," Magier said.

Meredith Martin, director of the Center for Digital Humanities and associate professor of English at Princeton, spoke about the interdisciplinary nature of the center, which, she said, "serves as an incubator to support faculty research" for projects that range from digitizing old 45 RPM "voicemail" recordings to digitizing the pages of the Cotsen Children's Library's vast collection of historical ABC books. The center also involves graduate students as project managers as well as many undergraduates.

Clifford Wulfman is director of the Blue Mountain Project, which is designed to digitize avant-garde periodicals that flourished beginning in the 1920s. "These assets are free for scholars to download, and we are working to make it available as a much larger initiative," said Wulfman, who is also coordinator of University Library Digital Initiatives.

After the presentations, Feeney thanked the presenters and proposed that the audience "add to the 850-million visits to museums every year" by attending a reception held at the art museum, adjacent to McCormick Hall.