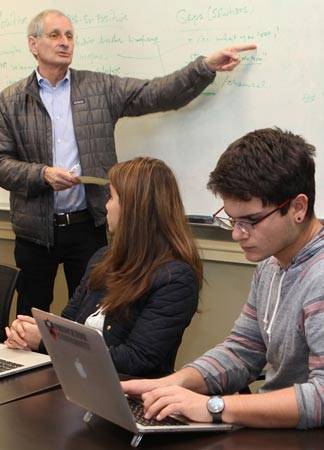 Seated around a long rectangular table on a recent fall afternoon, 15 Princeton freshmen intently watched a video presentation on the topic of regenerative medicine. Their assignment: Analyze the scientific argument and identify any "gaps" in the information. And, whenever possible, use their observations to come up with alternative experimental approaches.

"The Smart Band-Aid," which is designated the Richard L. Smith '70 Freshman Seminar, is taught by Jeffrey Schwartz, a professor of chemistry. Schwartz is an expert in surface chemistry and studies the interface between synthetic materials and living tissue in biomedical implants.

It's his second time teaching the seminar, in which students critically evaluate current presentations on research within the field of regenerative medicine — which focuses on healing damaged tissues and organs from within the body — then propose experiments that could make them more scientifically rigorous.

Scientists need to constantly question their own arguments, but also design well thought out experiments to put them to the test, Schwartz said. It's a way of thinking that he hopes to instill in his students. "We need solutions, not just problems," he said.

Students break out into a smaller group to discuss their observations after watching a video presentation of work dealing with regenerative medicine.

Schwartz emphasizes the importance of bringing several perspectives to bear on problems of human health — "often, expertise for a single perspective is inadequate," he said. This translates to needing to ask questions and to "turn skepticism into a positive response," he said.

On this occasion, the students were learning about how researchers at another university had used extracellular matrix proteins (ECM) — molecules that provide structure and support to surrounding cells — from a pig in an attempt to regrow the leg muscles of a wounded soldier.

In the previous session, Jean Schwarzbauer, the Eugene Higgins Professor of Molecular Biology at Princeton, gave a guest lecture on ECM, an area of research in which her lab specializes. She emphasized the importance of the structure of ECM, while the video presenter asserted that the proteins could be "ground up" and used at will.

The students had been instructed to note the positive and not so positive aspects of the video presenter's argument as well as the gaps of information in the research. After the video, the third out of five for the semester, the students would typically go around the table sharing one observation from each category. But Schwartz wanted to try something different this time.

He found that some students were shy about contributing, and taking the private suggestion from one of them, he divided the freshmen into three groups, before opening up the discussion to the full class. Schwartz was careful to assemble balanced groups, as students enrolled in the course have varying amounts of scientific research experience. Spreading out to different areas on the first floor of Forbes College, the groups took about 15 minutes to talk among themselves.

Schwartz paraphrased the philosophy for acquiring knowledge in three steps, as related last year by the Dalai Lama during his visit to Princeton. First, it involves gathering information, then listening to different points of view, and finally, critically and independently assessing everything you've learned. "These days there's too much information and not enough knowledge," Schwartz said.

In the seminar, Schwartz emphasizes the importance of bringing several perspectives to bear on problems of human health.

Several students said they appreciated Schwartz's high expectations for critical thinking. "He leaves room for you to form your own opinion," said Joyce Lee. Another student added that getting feedback on their ideas from Schwartz was especially beneficial because Schwartz could provide context and current facts from the field.

"It's definitely my most interesting course right now," said Evan Trauger, a chemical and biological engineering major, as the rest of his group, assigned to come up with positive aspects of the argument, nodded vigorously in agreement.

Once reassembled, the group commended the speaker for not using a sales pitch and for presenting a specific example from his data, while Schwartz jotted their comments under the positives column on the board. They added that the presenter's method of introducing the extracellular matrix proteins, essentially grinding it up and injecting it into the body, seemed easy to perform, a point that eventually shifted columns as the other students pointed out the method's lack of control over structure and specificity.

Schwartz asked the students to take their analysis one step further. "How would you test if the proteins' structure or chemical identity was important for regeneration?" he asked. Students volunteered answers that involved testing a variety of proteins while holding the other parameter constant.

The remaining two groups, focusing on the negatives and gaps in the talk, had multiple overlapping suggestions. They brought up concerns about the time pressures imposed by the lifetime of ECM, which disintegrates after 60 days, as was stated in the video. The students were curious about how the amount of ECM affected tissue regrowth, asking if more protein would be better.

Throughout the discussion, Schwartz posed some open-ended questions for the students to mull over.

"What's the difference between a steak and a hamburger? If you analyzed them chemically, what would they look like?"

Students also wondered about the patients' physiological reaction to a foreign material and proposed studying the amount of material lost or retained in the body.

"I have an intuition that there could be rejection," one student said.

"So you want data," Schwartz responded.

At the next session, as they've done after every video, Schwartz will lead what he calls a "science reality check." Students are given the scientific articles on which the presentation was based, and that have been annotated by Schwartz to help them understand the highly technical content, and then the class again discusses the merits of the research.

Drawing on the lectures and group discussions, the students are assigned to write four papers over the course of the semester, each in response to a specific video. In addition to detailing the pros, cons and gaps of the presentation, they must independently propose solutions for the scientific gaps and critique the speaker on credibility and effectiveness.

For the final guest presentation of the semester, Greg Harris, a postdoctoral researcher in the Schwarzbauer lab working on a joint project with Schwartz, will join the class to present their research groups' work on how variations in ECM structure affect cell activity, particularly for building a novel regeneration device. One piece of advice for the guest speaker: Be prepared for questions.

'The Science of Mythbusters': A freshman seminar