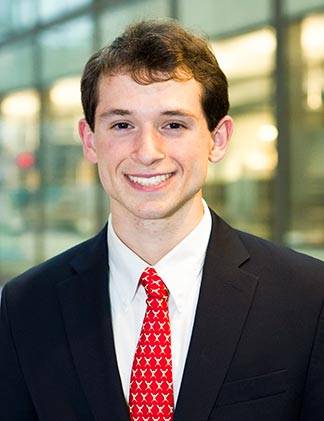 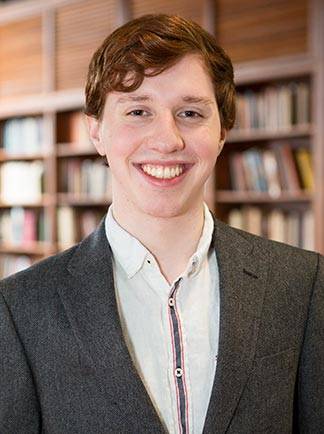 They will be recognized at a luncheon during Alumni Day on campus Saturday, Feb. 20.

Agolia, of Massapequa Park, New York, is a chemistry major. His academic honors include the Shapiro Prize for Academic Excellence in 2013 and 2014, the Peter N. Curtin Award for Excellence in Chemistry Research, and all-academic recognition from the Intercollegiate Rowing Association.

After graduation, he plans to attend medical school and pursue a career as a surgeon and basic scientist in academic medicine.

"I am very grateful for the many academic and nonacademic opportunities that Princeton has given me, and I am thankful for all the people on campus who inspire me daily to be a better person," Agolia said. "It's very humbling to accept this award since so many outstanding students deserve it."

For his senior thesis, Agolia is studying de novo proteins — proteins that are created in a laboratory and don't exist in nature — for functions that could have applications in medicine and industry.

The project began during the summer of Agolia's sophomore year, when he conducted research in the lab of Michael Hecht, a professor of chemistry, as part of the Department of Chemistry's Leach Summer Scholars Program.

"The Leach Program was my first experience with research, and I quickly found that I loved it," Agolia said. "I could not ask for a better working environment than the Hecht Lab. The graduate students, undergraduate students, postdocs and of course my adviser, Professor Hecht, have been extremely supportive, enthusiastic and fun to work with."

"In the first semester of his freshman year, James took my course in general chemistry; during the summer after sophomore year and continuing into junior year, he worked in my research lab; and now James is doing his senior thesis research in my lab," Hecht said. "In all these contexts, James impressed me as a spectacular student and an excellent young scientist."

Nelson, of Bellevue, Washington, is majoring in German and pursuing certificates in European cultural studies, values and public life, and French language and culture. His academic honors include the Arthur Liman Fellowship in Public Interest Law, the Guggenheim Internship in Criminal Justice, Phi Beta Kappa, membership in the Behrman Undergraduate Society of Fellows, and the Department of German's book prize.

After graduation, he plans to work in policy advocacy and public interest law, with a focus on criminal justice, education and youth development.

At Princeton, Nelson has been a residential college adviser in Forbes College; a writing fellow in the Princeton Writing Center; a board member at Community House, a part of the Pace Center for Civic Engagement; a learning consultant and member of the student advisory council for the McGraw Center for Teaching and Learning; a saxophonist for the Triangle Club and the Princeton University Wind Ensemble; and a tutor in the Prison Teaching Initiative.

"It is overwhelming to receive this kind of recognition from a community I feel so fortunate to be a part of," Nelson said. "At Princeton, I have found mentors, friends and peers who are as relentlessly supportive of me as they are remarkable in their own lives. The award reminds me how grateful I am  to be a part of a university that values not only excellence, but also a human connection."

For his senior thesis, Nelson is writing about the works of Robert Walser, an early 20th-century Swiss author he first encountered in a seminar led by Inka Mülder-Bach, a visiting professor of German.

"My goal has been to take an author who I find both difficult and delightful — who has captivated minds from Franz Kafka to Susan Sontag — and to tease out what a thinker like him has to offer to conversations about classical virtue in a modern context," Nelson said. "I have taken coursework in both philosophy and literature, and in my thesis, it has been exciting to approach literature as a medium for philosophical inquiry — providing nuanced, if difficult, answers to persistent questions."

"Andrew is admirably smart; Andrew asks excellent critical questions in a most polite manner; Andrew is a most philologically astute reader," said his thesis adviser, Barbara Nagel, an assistant professor of German. "But what is really unique about Andrew is that in his case knowledge is integrated in ways of living. To put it differently, Andrew seems to be deeply interested in the variety of human experience and how it expresses itself — in literature and philosophy in particular, but also beyond the confines of the academy. "