He arrived onstage without a violin — neither his 1714 Soil Stradivarius nor his Guarneri del Gesu 1743 Sauret, which he has played on concert stages around the world — and still gave a command performance. On Tuesday, Feb. 10, world-renowned violinist Itzhak Perlman — winner of 16 Grammy Awards and a recipient of the Presidential Medal of Freedom — and his wife, fellow Juilliard graduate Toby Perlman, opened the Class of 2016's Last Lectures series in Richardson Auditorium at Princeton with a talk titled "My Goal Is to Not Be Bored by What I Do."

The Last Lectures Committee organizes the annual series to provide inspiration, life advice and guidance to graduating seniors. The series continues at 4:30 p.m. Monday, Feb. 15, in McCosh Hall, Room 10, with Jeremy Johnson, a 2006 alumnus and founder of 2u, an education technology company, who will give a talk "Working at and Launching a Start-up," which is open to the public with priority seating for Princeton seniors. Robert Mueller III, a member of the Class of 1966 and the previous director of the FBI, will give a talk, not open to the public, titled "Lessons in Integrity, Service and Patience." 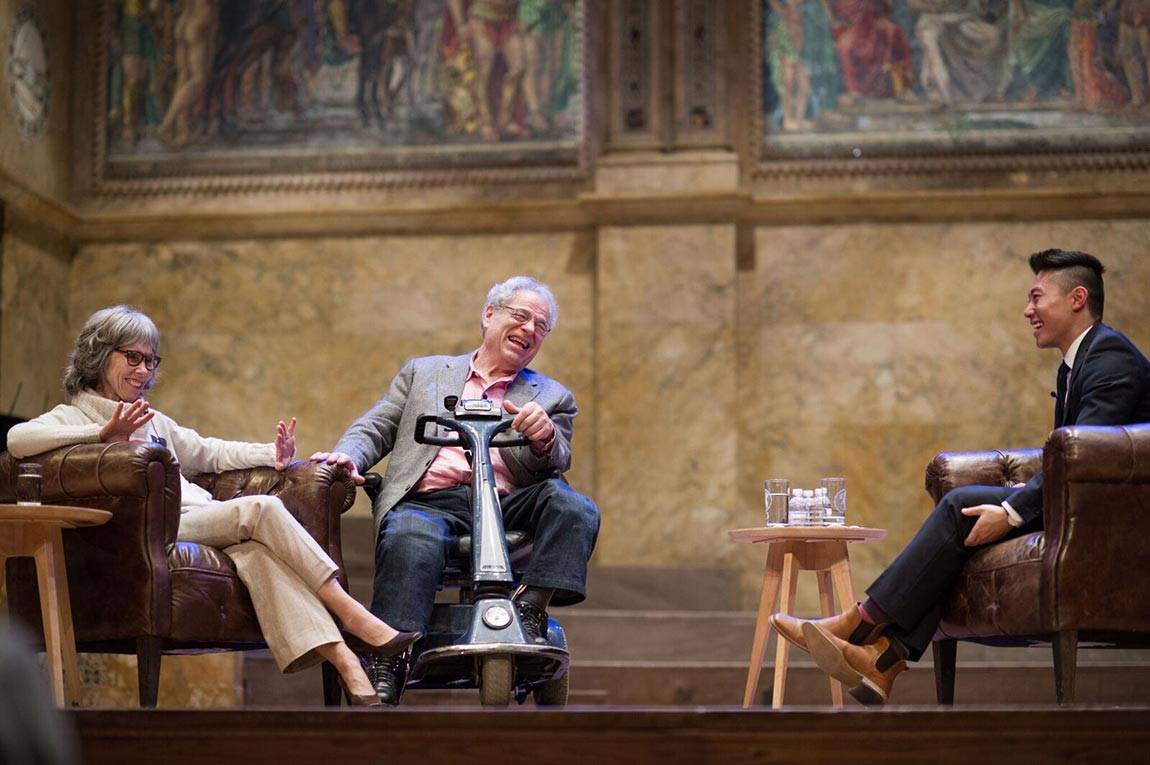 Princeton student Richard Lu, a Class of 2016 officer (right), engages violinists Toby and Itzhak Perlman in a lively discussion in Richardson Auditorium on Tuesday, Feb. 9, titled "My Goal Is to Not Be Bored by What I Do." The event was the first of the Last Lectures series, designed to provide inspiration, life advice and guidance to graduating seniors. (Photos by Sameer Khan/Fotobuddy)

Senior Caroline Suh — a member of the Last Lectures Committee and a violinist in the Princeton University Orchestra who studied with the Perlman Program for young artists starting at the age of 12 — introduced the Perlmans, who have been married 49 years, commenting that together they form "the hashtag 'relationship goals.'"

Moderator Richard Lu, class government treasurer who will attend Oxford University as a Rhodes Scholar after he graduates, opened the conversation. "A lot of us here at Princeton like to think of ourselves as child prodigies — but you actually were one," he said, eliciting a swell of applause from the audience, which included seniors as well as the public.

Itzhak Perlman responded with a humility that he would maintain throughout the event. "'Child prodigy' gets thrown around," he said. "I don't think I was one." A native of Israel, he described the sense of wonder that accompanied his first trip to the States when he was invited to perform on "The Ed Sullivan Show" at age 13. "What I had most looked forward to in the States was television and Polaroid cameras. Snapping a picture and seeing it immediately? Wow!" 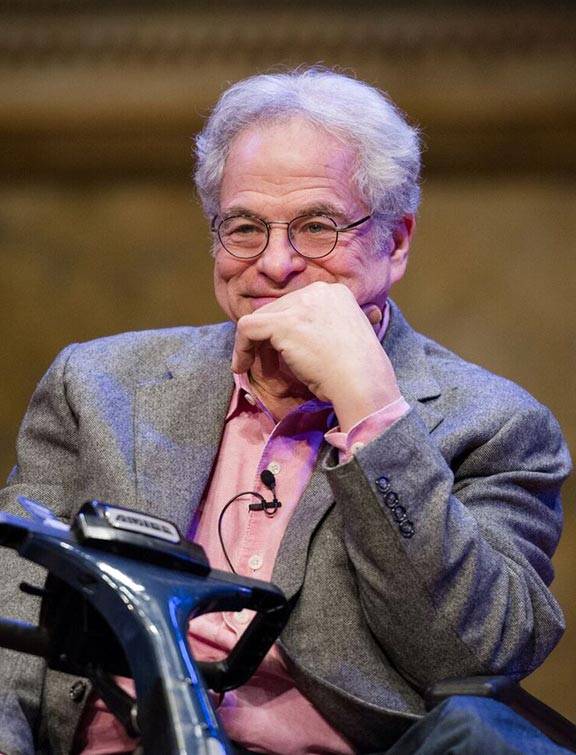 Itzhak Perlman, a native of Israel, who was recently awarded the Medal of Freedom by President Barack Obama, shares stories of his childhood and storied career — including his first appearance in America on "The Ed Sullivan Show" at the age of 13.

It is exactly this sort of excitement that Itzhak Perlman said he hopes Princeton seniors will have as they prepare for the future. "Ideally, you have to love what you do," he said.

"I think my husband is right," said Toby Perlman. "Part of the secret of life is loving your work and positioning yourself so that your work nourishes you."

In a lively hour-long discussion followed by a question-and-answer session, the Perlmans weighed in on a broad range of topics from the state of musical education, to keeping familiar pieces of classical music fresh, to the importance of picking the right spouse. They told stories together, often finishing each other's sentences with ease and affection, much to the audience's amusement.

Senior Adam Rosenstein, a DJ for the student-run WPRB radio station, came to the event hoping to discover the secret to success. He was pleased to learn how relatable the Perlmans were. "I can't believe Itzhak watches baseball while he practices," he said. "I watch games on silent while I play the saxophone!" 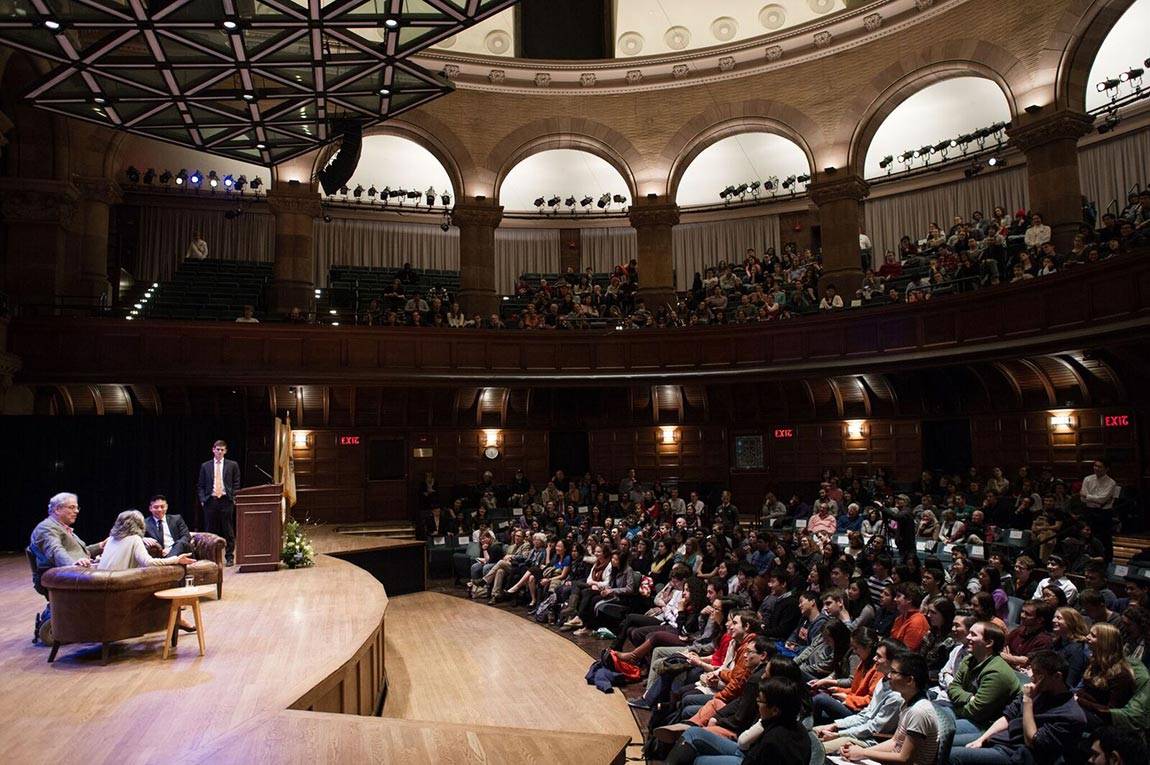 Laughter and applause punctuate the entertaining discussion, attended by members of the senior class as well as other Princeton students, members of the University community and the public.

The comfort and rapport between the musicians was obvious in the way that Toby Perlman would lean over the cushioned arm of her chair toward her husband's electric wheelchair to remind him of some decades-old anecdote. When asked to name one influential person who had made him who he is today, Itzhak Perlman paused. His wife seized the moment. "You know," she said, "if he was really smart, he would say me," evoking laughter and applause from the audience. "You took the words away from me," Itzhak Perlman complained, and the audience let out a long "awwww." Dropping the humor momentarily, he said in a serious tone: "In your future, your spouse is the most important part of your life —" and Toby Perlman finished " — so it's important to pick the right one."

In an age when the arts are being cut from public school curricula, Lu asked the Perlmans why music education is essential. "Music gives us permission to dream. And out of our dreams, sometimes something important happens," said Toby Perlman, who started the Perlman Program as a way to nurture young musicians holistically as players and people.

Suh attended the Perlman Program — an immersive summer experience where a select group of young string musicians ages 12 to 18 receive instruction from Itzhak Perlman and other world-renowned faculty — for six years before matriculating at Princeton. "It's kind of a cult," said Suh in an interview before the event. She reminisced on the daily rituals of individual practice, choir singing and orchestra rehearsals. She said lifelong bonds were formed with her peers on Shelter Island, isolated from the rest of New York City by water.

As Suh finished the Perlman Program, she reluctantly admitted to herself that professional violin was not for her. Attending Princeton rather than a conservatory initially made her feel guilty, as if she were wasting the years of training the Perlmans had invested in her. "I felt like a disappointment," she said, adding that the Perlmans were extremely understanding and supportive. Suh does not regret withdrawing from the highest level of violin playing. "Frankly, I enjoy classical music more without the constant pressure to succeed," she said. 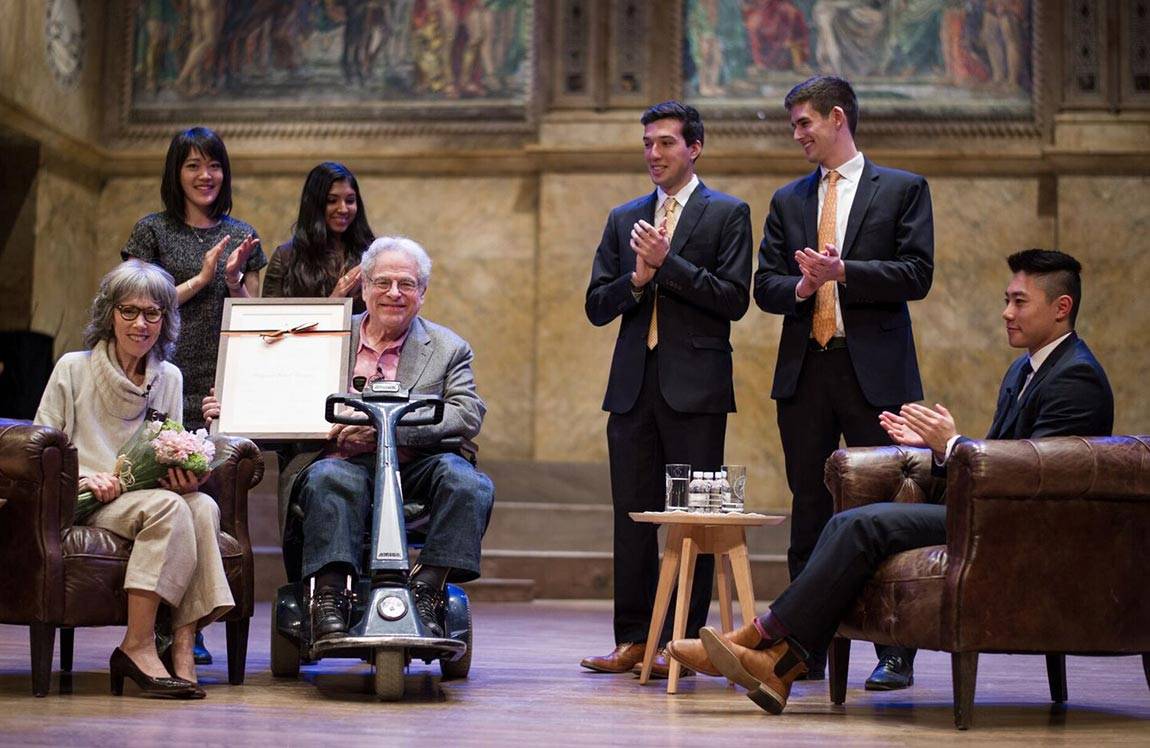 The Perlmans' advice — to pursue what you love, but without making rigid plans; to seek challenge and leave room for surprises — were the real takeaway for seniors who, as class president Justin Ziegler said in his introductory remarks, "are deciding on which path to lay the first bricks of our adult lives."

At the end of the discussion, the senior class officers joined Lu on stage to induct the Perlmans into the Class of 2016 as honorary members with a plaque. The Perlmans intimately connected with the seniors in the room, just like true classmates. Ziegler's closing comment summed up the camaraderie in the auditorium. "I speak for everyone here when I say that we could talk to you all day," Ziegler said.