by by Ethan Sterenfeld, Class of 2020

"When I was young, I didn't think I wanted to be a scientist," said Eric Wieschaus, Princeton's Squibb Professor in Molecular Biology and the 1995 Nobel laureate in physiology/medicine, addressing the audience in McCosh Hall. Seated alongside him were three other Nobel Prize winners on the Princeton faculty.

"I didn't know what a scientist was," Wieschaus said. "I painted all the way through high school, and I thought that was what I wanted to do."

It wasn't until much later, he said, that he realized how much the artistic mindset — having an intuitive sense of what something would look like and the ability to recognize patterns quickly — had helped his scientific career. "Almost all the time I was being a scientist, I was also being an artist," Wieschaus said. 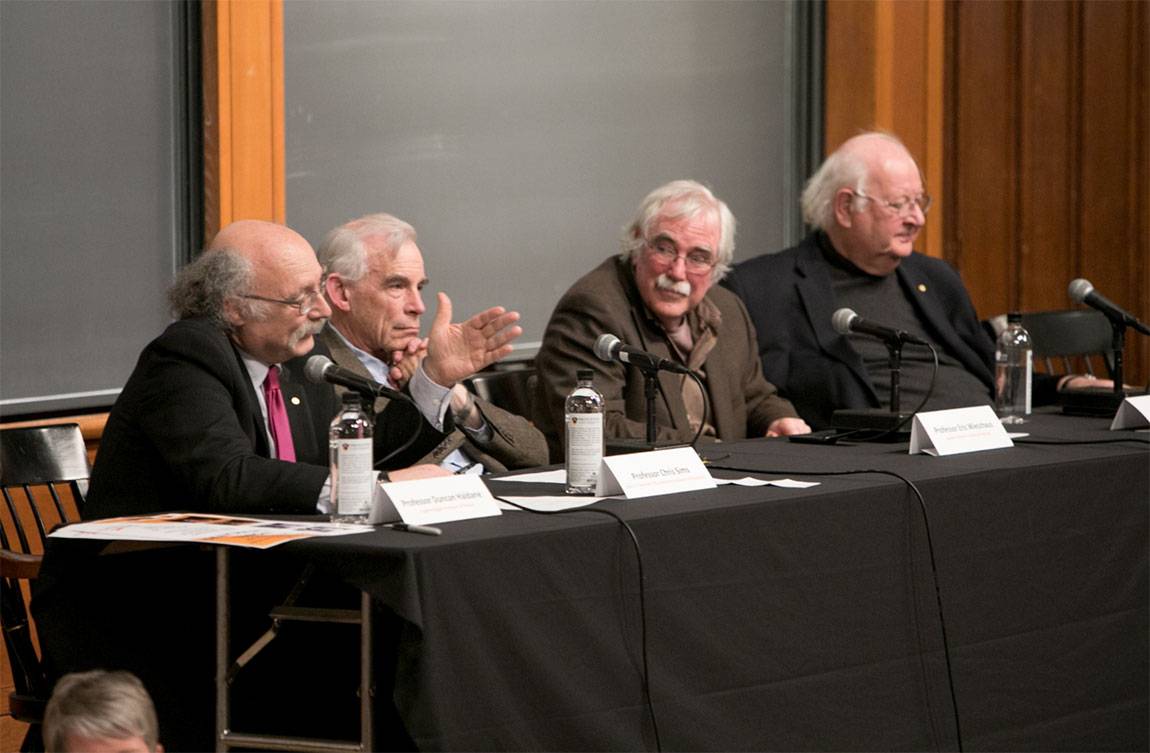 "A Conversation with Four Nobel Laureates: Reflections on Resilience Through Challenges," part of the "Last Lectures" series organized by the senior class, took place on Thursday evening, April 13. Senior Kishan Bhatt facilitated the lively discussion that drew laughter, solemn nods and applause as the laureates shared stories about the challenges they had faced and the lessons they'd learned in their careers. Many of the seniors in the audience took notes on their laptops or scribbled furiously in notebooks.

"If you like what you're doing, do it," said Christopher Sims, the John J.F. Sherrerd '52 Professor of Economics who received the Nobel economics prize in 2011. He warned students "not to be too anxious about external measures of achievement. You don't have to win a prize."

It is especially important to have a supporting family, Sims said. He also emphasized the value of having an active life outside work. "I wanted to be a jazz trombonist — I still play a couple of times a week. Just because you're not the best doesn't mean you can't have a good time. To be happy, enjoy the flow."

Duncan Haldane, the Eugene Higgins Professor of Physics, who was awarded the 2016 Nobel Prize in physics, told students that hard work is essential for all their careers.

"Being super brilliant or something is not in any way the path to the Nobel Prize," Haldane said. "You just have to be lucky to stumble across something and have your eyes open to realize that you've stumbled on something."

Haldane was awarded the Nobel because he stumbled across "theoretical discoveries of topological phase transitions and topological phases of matter," according to the Nobel Prize citation. When Bhatt briefly summarized Haldane's work during his introductions of each laureate, Haldane chuckled and said, "that's close."

Haldane also emphasized the importance of facts. "Just because we think something is true doesn't mean it's true," he said. "The way the world works is not opinion." Referring to climate change, for example, he noted that we "learn from observation. At the end of the day, science lets you know what's going on. Facts matter." 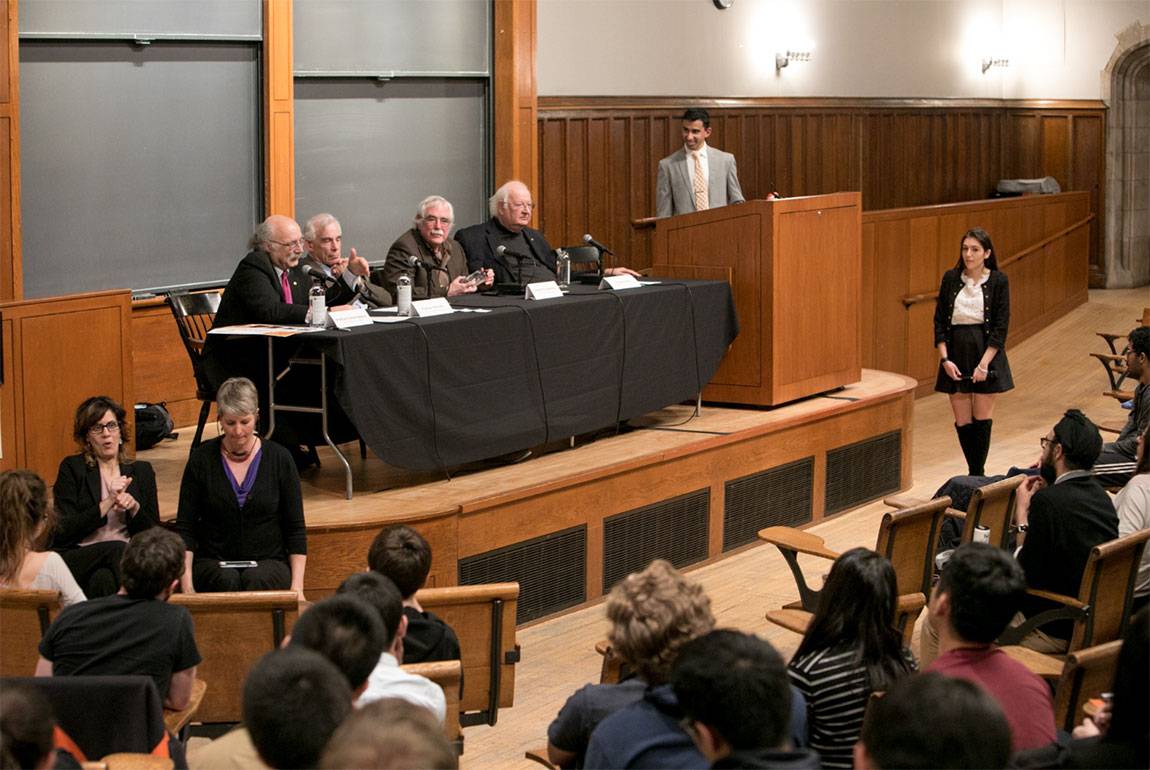 Senior Kishan Bhatt, a concentrator n the Woodrow Wilson School of Public and International Affairs and a member of the Last Lectures committee (at the podium), facilitates a lively discussion on topics ranging from work/life balance to the meaning of success.

Angus Deaton, the Dwight D. Eisenhower Professor of International Affairs, Emeritus, and professor of economics and international affairs, emeritus, is a 2015 Nobel laureate in economics. After admitting, with a grin, that he's "the only one who's had my work summarized in a Doonesbury cartoon," he said that when he received the early-morning call from Stockholm, he was unsure what work he was being given the prize for.

"Through my professional career, I sort of assumed that it was very unlikely that I would ever be awarded the Nobel Prize in economics, because when they give the prize, they like to focus on a rather specific thing," Deaton said. "Whereas, all through my life, I've flitted from one thing to another."

"They said, 'Do you want to know what you're getting it for?' and I said, 'Yeah, that would be nice,' Deaton said, drawing laughter from the audience. "Then they gave a wonderful summary of my life's work, which actually made sense of it all in a way that I hadn't really made sense of it. My reaction was, 'Okay, so that's what I worked on.'"

When Bhatt asked the laureates to share something about adversity they had faced, Deaton said he grew up "a long time ago" in a small village in Scotland, the son of a coal miner who left school at age 11 or 12. He said academics were not "prized like sports." While he did very well in school with an eye toward becoming an academic, Deaton said he always felt like an outsider, "though I've come to appreciate that. I've become very used to not belonging. A Nobel Prize doesn't cure that loneliness." 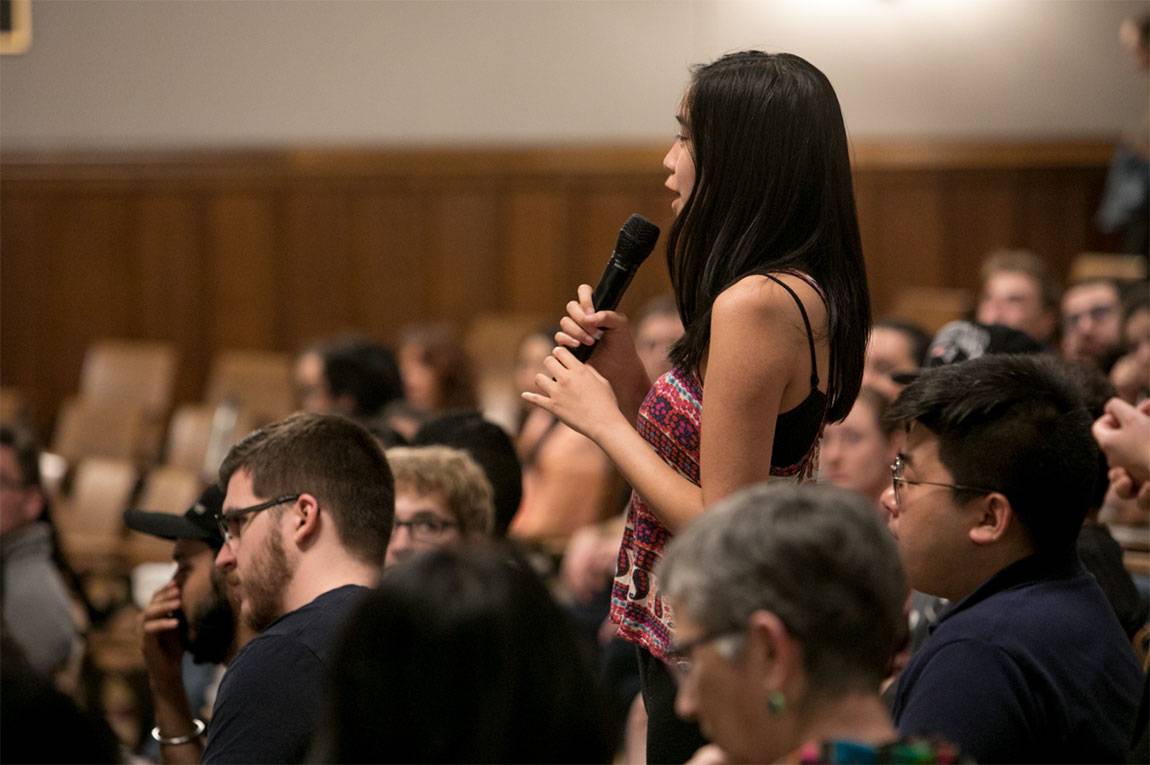 During the Q&A, a student asks the panelists about the value of collaboration in their research.

Bhatt, a concentrator in the Woodrow Wilson School of Public and International Affairs, will enroll in the Wilson School's Scholars in the Nation's Service Initiative master's program this fall. As a member of the Last Lectures committee, he said he wanted to showcase the unique connections between Princeton's students and award-winning faculty by bringing together four Nobel laureates — two of whom, Duncan and Haldane, had been awarded their prizes while the Class of 2017 was at Princeton.

Noting the start time of 7:15 p.m. — due to Haldane's travel schedule, which brought him straight to McCosh 50, suitcase in hand, from a trip to Long Island — Bhatt said it was "actually the only time in the entire semester when we could have the whole overlapping Venn diagram of all four come together. They're really busy, but it's gracious of them to share their time. We're really grateful."

Many of the graduating seniors who attended appreciated the advice the laureates gave.

"I felt like it was the last chance I had to have giants of the field tell me about their path and what their struggles and their challenges were," said Dhruv Bansal, an operations research and financial engineering major. 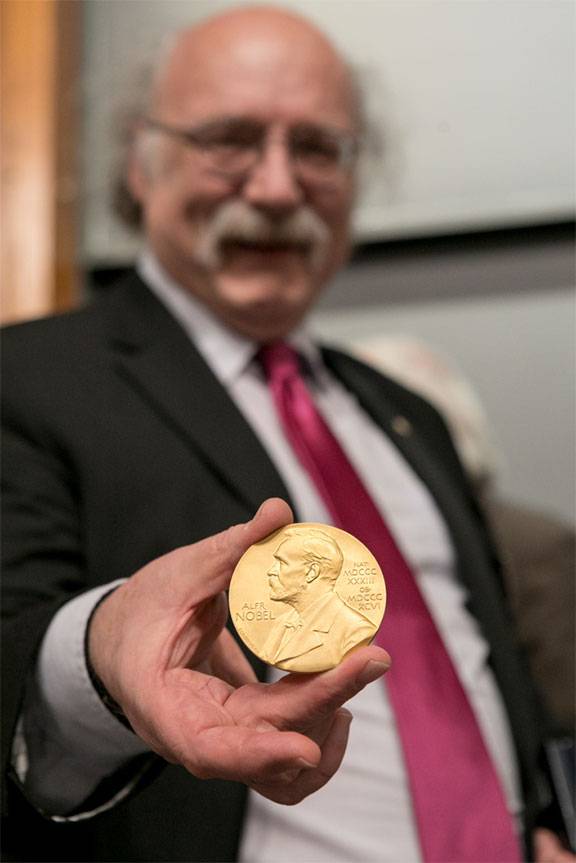 Senior Deniz Lenger said the lecture helped her understand that everyone faces failure at some point.

"When you think about these amazing people who have reached the pinnacle of success in their field, you can have a really unbalanced view of success, and you can disregard any struggles they may have had in the past," said Lenger, an economics major. "I think it gives you a lot of great perspective about research, about how to deal with criticism, with balancing the personal with the professional."

Bhatt said the Last Lectures series has featured speakers who have given practical and inspirational advice on a range of subjects aimed at graduating seniors since its inception five or six years ago. Last year, the violinist Itzhak Perlman and his wife Toby Perlman gave the talk, "My Goal Is to Not Be Bored by What I Do."

Remaining this year is a lecture by Robert George, the McCormick Professor of Jurisprudence and professor of politics, and Amaney Jamal, the Edwards S. Sanford Professor of Politics, titled "Active Citizenship for College Graduates in the 21st Century." Also, James Steward, the Nancy A. Nasher-David J. Haemisegger, Class of 1976, Director of the Princeton University Art Museum, will give a talk focused on teaching students how to appreciate art.