The historic drought that parched Brazil over the last two years was not just a water-supply problem — it was also a power problem. The nation's heavy use of hydroelectricity, which had made it a model of renewable energy, contributed to an increased risk of rolling blackouts in some of Brazil's largest cities during severe droughts. Now, Princeton researchers are joining with colleagues at a Brazilian university to help the operator of Brazil's electric grid and the country's major utilities develop a system to better manage their electric system when hydropower dries up.

Warren Powell, a professor of operations research and financial engineering, will join colleagues at the University of Campinas to analyze plans for integrating new types of renewable energy into the Brazilian electric grid. Powell, whose work focuses on optimization and uncertainty, has done extensive research on electricity distribution systems. Among other topics, Powell has analyzed the PJM Interconnection — the massive grid that supports an area ranging from the Mid-Atlantic states to the Ohio Valley. A group of 19 electric power generation companies in Brazil asked for Powell's help in managing their own system — in particular they were seeking advice on integrating wind power into the grid.

"The Brazilians are the world's experts at modeling hydropower," Powell said. "But they need mechanisms to deal with the variability of wind power." 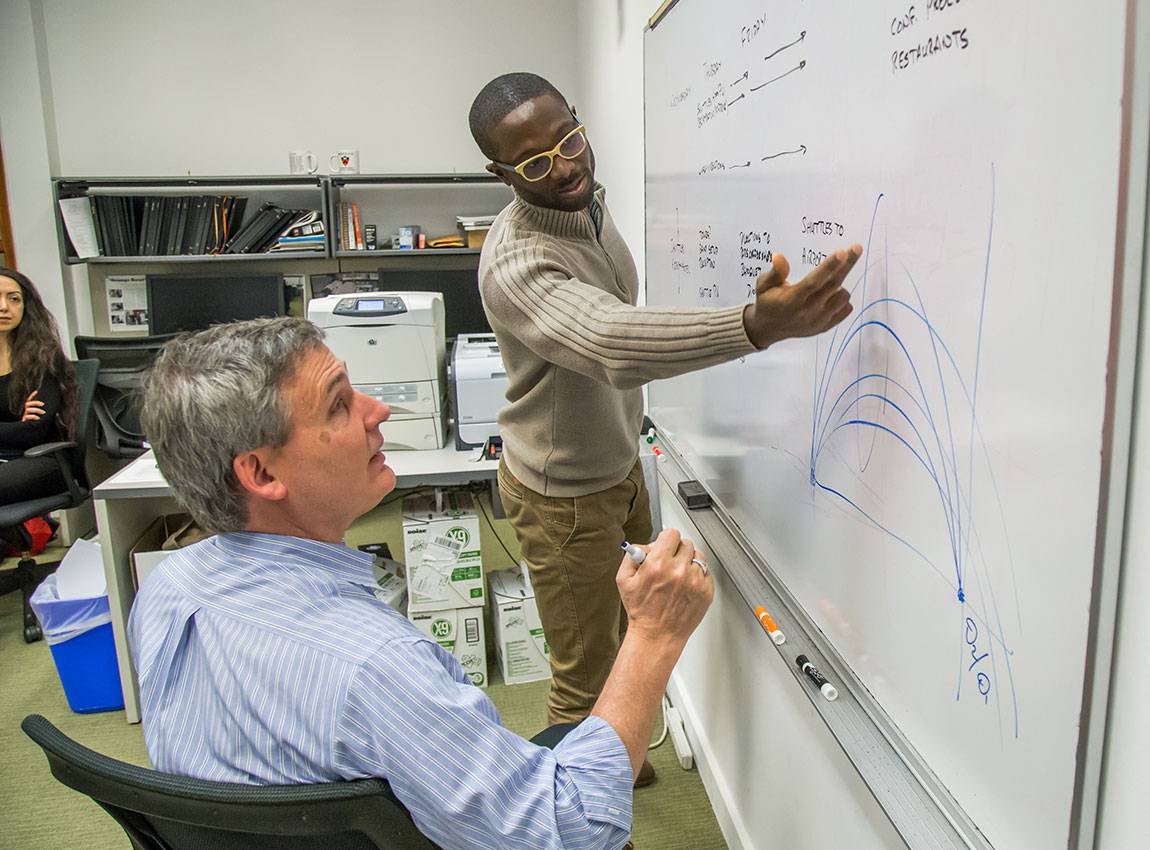 Warren Powell, a professor of operations research and financial engineering who has done extensive research on electricity distribution systems, is helping Brazilian power companies smoothly integrate more wind power into their electric grid. Above, Powell talks with Nana Aboagye, a fourth-year Ph.D. student in operations research and financial engineering and member of his research group. (Photo by David Kelly Crow)

Managing an electric grid is far more complex than turning on the power. The amount of power running through the system has to be carefully balanced to prevent shortfalls on one hand or wasted energy on the other. As the systems get larger, the job becomes more complicated. In the United States, grids are coordinated by federally regulated groups called Independent System Operators. The PJM Interconnection, for example, has over 61 million customers and coordinates roughly 1,300 power generators ranging from small solar fields to massive nuclear plants.

"We have learned to deal with different types of uncertainty," Powell said. "A major challenge in this project involves solving the problem over very different time scales, from seconds to hours for wind, up to weeks to years for rainfall. Ultimately, the goal is to build and design a robust power system, developing tools that will help Brazil but which can then be transferred to other settings."

Paulo Barbosa, professor in the Department of Water Resources at the University of Campinas, said the research project will examine ways to integrate intermittent power sources into the grid both in Brazil and in other countries seeking to follow that path.

"Existing power systems were not designed to operate with intermittent sources of generation," said Barbosa, who was a visiting fellow at Princeton University in 1999 and 2000. "As countries or regions increasingly embrace intermittent renewable resources, new operational challenges arise for grid operators to maintain the quality of the electric supply despite intermittency and the low predictability of renewable production."

One way that grid operators deal with uncertainty of demand, and sometimes supply, is to use layers of different types of generators. Large nuclear, or coal plants provide constant power, known as baseload supply, while more responsive plants, such as gas turbine generators and hydropower plants, can ramp up power with an hour's notice. Grids also typically have emergency generators on standby that can respond in minutes.

"We need to exploit the range of notification times so that we can take advantage of information as it arrives," Powell said.

Much of Powell's research focuses on developing methods to model and cope with the various problems that can stress grid operations, from power-cutting squirrels to storms and heat waves. These methods help operators smooth out uncertainty and deal with situations before they develop into serious problems. PJM runs software that helps operators evaluate about 6,300 potential problems every minute.

Although renewable supplies offer many advantages over fossil fuels, the electricity they provide currently varies with wind speed and sunlight, which are hard to predict and might not be available when demand is high.

"The problem is when the wind dies, and how well can you forecast it," Powell said.

Powell's research team has done considerable work in recent years developing methods to account for variability in wind generation. One of the challenges will be to adapt the work to Brazil's particular environment. Another will be to integrate the wind-power system with Brazil's methods for managing hydropower.

"We are not going to try to rebuild their model, but we have to be able to get our model to talk to their model," Powell said.

Barbosa said the goal is to develop a model that will assist grid operators in the daily management of the system as well as long-term planning for new types of generation. It will also "help planners define best positions to expand wind and solar power, new transmission lines," he said.

A successful model, Powell said, will help operators create a system with enough options that extreme stress in one area, such as a drought, would not leave the grid crippled. To be effective, the system needs to reflect its environment as well as power demand.

"The Midwest has ethanol, Florida has biofuel and the Northeast has hydropower from Quebec. We need to learn what Brazil has," he said. "We want to help Brazil develop a portfolio with enough options so there is always something to turn to."