Illustrations by the Office of Communications

Princeton University's trustees have adopted the University's operating budget for 2016-17, which includes a 6.6 percent increase to $147.4 million in the undergraduate financial aid budget to continue to ensure that a Princeton education is genuinely affordable for every admitted student.

Princeton provides financial aid in the form of grants, which do not have to be repaid. It does not require any borrowing, so students can graduate debt free.

"Affordability and accessibility are among our highest priorities, and in adopting our budget every year we are careful to protect all of our aid recipients from the impact of increases to our fee package," said Provost David Lee. "We re-evaluate the packages for continuing students each year to ensure that their awards are adjusted to cover their full financial need.

The average annual bill next year for students on aid is projected to decrease from $13,241 to $12,930, while the fee package (which includes tuition, room and board) for full-tuition paying families will increase from $57,610 to $60,090. For the 17th year in a row, Princeton will have the lowest fee package in the Ivy League. 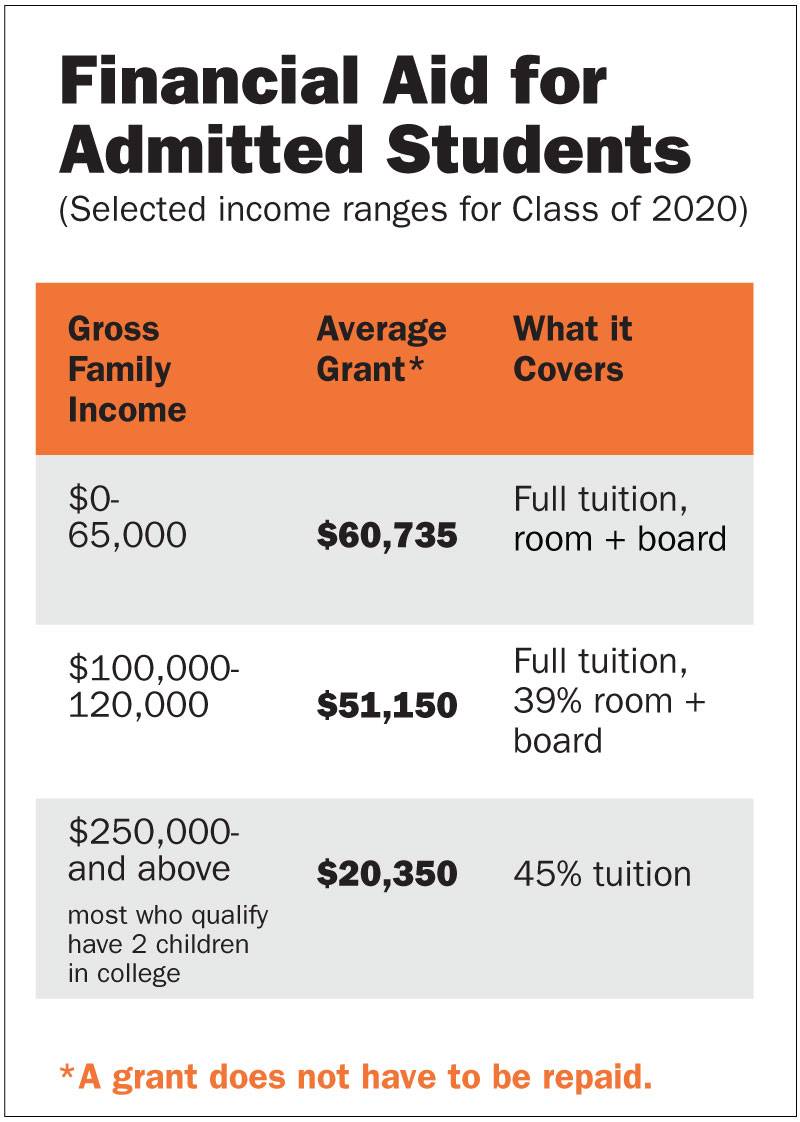 Princeton tailors each financial aid package to a family's particular circumstances. In determining need, it excludes equity in the primary residence and retirement savings and it considers other obligations, such as educational expenses for other children as well as debt and medical bills for dependents. Princeton's commitment to access is reflected in an increase in the percentage of students receiving Pell grants from 7.2 percent in the Class of 2008 to 18 percent in the Class of 2018.

President Christopher L. Eisgruber presented the budget proposal to the trustees during a meeting on April 2. The proposal was based on recommendations of the Priorities Committee of the Council of the Princeton University Community, which is made up of faculty, students and staff, and chaired by the provost.

The 2016-17 budget includes a transition allowance to help low-income students with move-in costs, as well as new expenditures in areas ranging from University Health Services and the Graduate School to the Offices of Information Technology and Audit and Compliance.

The budget also includes an increase in endowment spending to move the University's spending rate over a two-year period toward the middle of its target band of 4 to 6.25 percent of the value of the endowment.

The roughly $100 million increase in FY17 endowment spending, in an overall budget of $1.9 billion, is intended to help fund key strategic initiatives that the trustees identified in a strategic planning framework they adopted earlier this year. These initiatives include a 10 percent expansion of the undergraduate student body, increased funding for undergraduate financial aid and graduate support, and investments in teaching and research in key academic areas such as engineering, humanistic inquiry, and environmental studies.

"In adopting this budget and in approving this increase in endowment spending, the trustees are enabling us to meet our highest current priorities — including our commitment to access and affordability — while also preparing for the new investments and funds that need to be raised to achieve the ambitious goals outlined in the strategic framework," Lee said.