Discovery. Community. Diversity. Leadership. These are some of the values that guide graduate education at Princeton University.

About 2,600 students are enrolled in master's and doctoral programs at Princeton's Graduate School, studying closely with faculty in 42 academic departments and programs. Each of these students experiences campus differently, and, below, five graduate students share their impressions of Princeton.

Yixin Gu, a graduate student in East Asian studies, cites Princeton's East Asian Library as one of the reasons he chose the University. (Photo by Denise Applewhite, Office of Communications)

On his academic experience: "Princeton was my first choice when I first decided to advance my Ph.D. research in the United States. Generally, it is known as the right place to seek the highest level of academic challenges and an open-minded spirit for intellectual exchanges. The huge collection of texts and scholarships owned by the Princeton East Asian Library was another thing that attracted me a lot. In the first academic year, the most delightful academic experience for me was that I substantially cultivated a sense of critical thinking on the problematic issues in my research, thanks to the open-minded atmosphere in all my seminars, meetings and academic activities. Teachers and students around me are always ready for bringing new challenges or being challenged by others."

Additional interests: Engaging in classical poetry productions and communications; taking photos of human figures and landscapes; participating in academic activities hosted by the East Asian studies department and program. Said Gu: "Princeton is a wonderful platform for international students, on which the most amazing cross-cultural communications happen. The Department of East Asian Studies itself is a story about diversity, as we have our students and fellows from a lot of areas such as East Asia, America and Europe. People are really nice around me, and we do share a lot, not just by having academic communication, but also by being close friends in each other's lives." 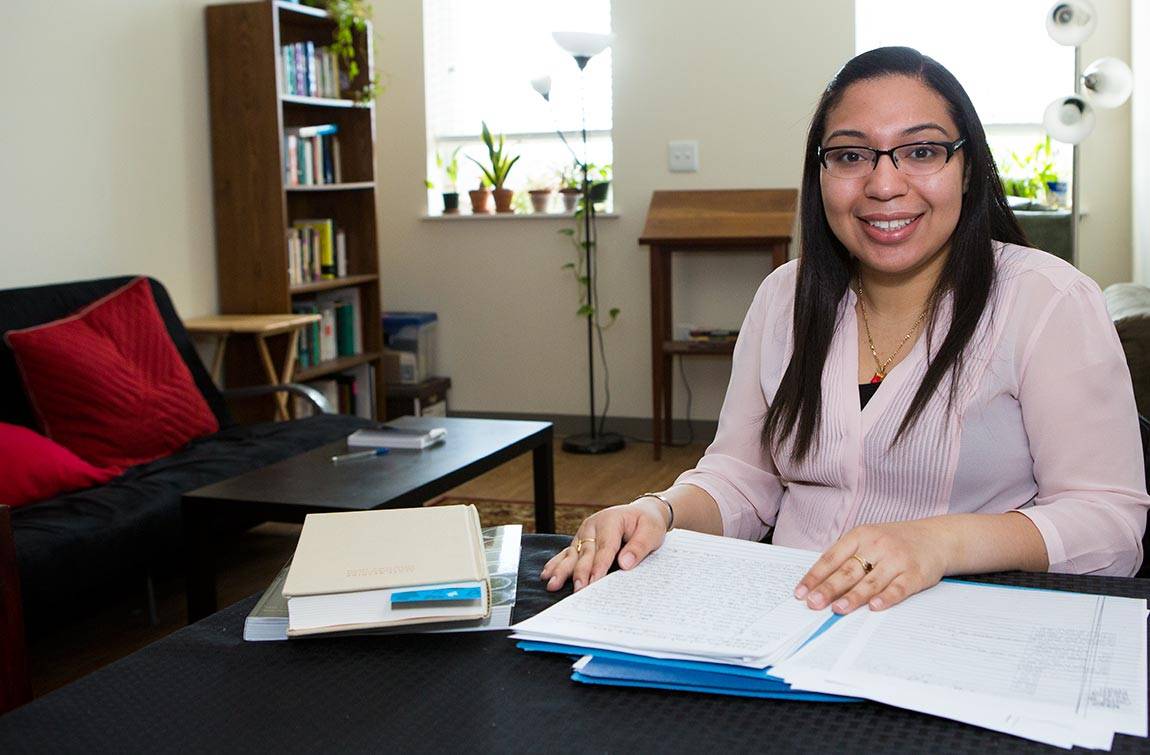 Emilce Santana, a graduate student in sociology and demography, lives — and studies — in the University's Lakeside graduate housing. (Photo by Denise Applewhite, Office of Communications)

Background: Raised in the Bronx, New York, and earned a bachelor's degree in sociology at the University of Pennsylvania.

Research focus: "Broadly it's three subjects — immigration, race/ethnicity and social stratification. I'm studying Latin American immigration into the United States, and how these immigrants and their descendants integrate into U.S. society, from a quantitative perspective."

On her academic experience: "The way Princeton sociology runs, there's a lot of freedom. People don't baby you and aren't hovering over you. But if you need help, they'll be there. When I've emailed a professor and said I'm confused about something, I've never received a no, even if people are super busy. Also, I've received a lot of help from more advanced students. They've given me wonderful advice on how to be a productive budding scholar."

On choosing to come to Princeton: "There was a personal reason to it as well as professional reasons. I did weigh the professional first. Princeton was the best fit intellectually because there are several professors in both sociology and demography that study immigration. Second, the resources are amazing. How many schools will say, 'We'll fund you for five years including summers'? Also, geography helped. It's really nice to see my family in New York City whenever I please."

Additional activities: Secretary for the Latino Graduate Student Association (LGSA); third-year graduate representative for sociology students. Said Santana: "I'm close to the LGSA board. We have monthly board meetings and for all members, we host a weekly dinner as well as happy hours a couple of times per semester. It expands your social network, and it's nice to talk to people outside your department and see other people's experiences across different fields." 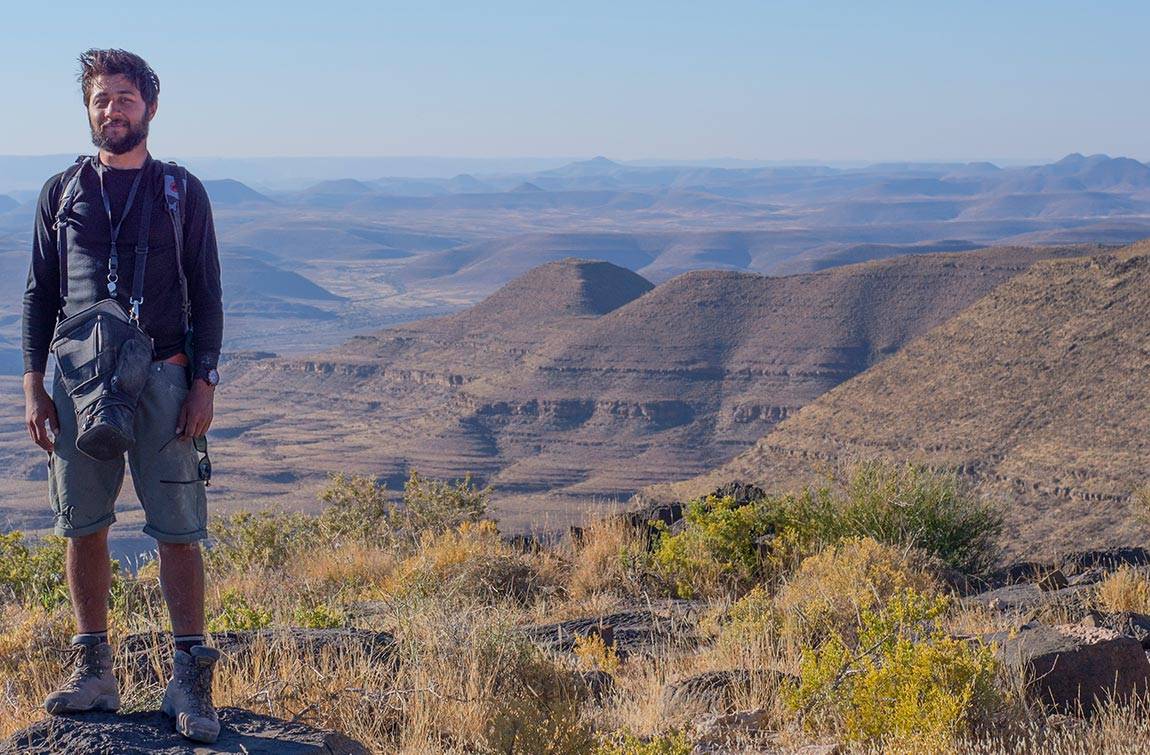 Geosciences graduate student Akshay Mehra collected geological samples in Namibia after his first year at Princeton and analyzed them back in the lab. (Photo by Adrian Tasistro-Hart, Class of 2017)

Background: Born in India; grew up in Stamford, Connecticut; got his bachelor's degree in architecture at Cornell University; worked as an architect in New York City before coming to Princeton.

Research focus: "I study these things that are half a billion years old, the first animals in shells, and we're trying to figure out through 3-D reconstructions how they lived. My research is field- and lab-based. My first summer, I spent eight weeks in Namibia walking up walls of canyons to look for buried reefs and sedimentary remnants, studying and measuring them and collecting samples. We brought back almost a ton of samples, and took them to a machine here that I helped to design when I was an architect, GIRI (the Grinding, Imaging and Reconstruction Instrument). You mount a piece of rock on the machine, and it grinds off 30 microns at time. It takes a slice and moves the sample under an 80-megapixel digital camera. We just keep doing this, taking samples as we grind away."

On his academic experience: "I love it here. I like the geosciences department, and the professors are supportive. You can't beat getting paid to learn, and that's what we're doing. You can explore an idea and if it doesn't work out it's OK, you're still learning something. Last summer, I was in the Rockies doing fieldwork. We crossed one river, and instead of being a hiking path, the trail disappeared. At the second water crossing, the water was up past our waists. I remember texting my adviser, saying, 'We're coming out.' He said, 'Where's the nearest helicopter?' The next day I drove up to this helipad and then for four weeks, we were in an alpine meadow on top of this mountain. Those are the things that highlight why I came here. I wouldn't be able to do that anywhere else."

Additional activities: Vice president and former president of Graduate Student Government (GSG); participating in the Hindu Life Program. Said Mehra: "Being involved in GSG, what really helps is meeting administrators and understanding root causes of issues. Now when I hear about a person's bad experience, I say, 'Who can we get you in touch with that can help you out?' I've talked to other graduate student governments at other institutions, and we have it really good in many ways. We're all paid on time and have health insurance. Our stipends are competitive. There are a lot of things that can be improved, but in general our institution really treats graduate students well. I like the University more after this experience and not less, which is a good thing." 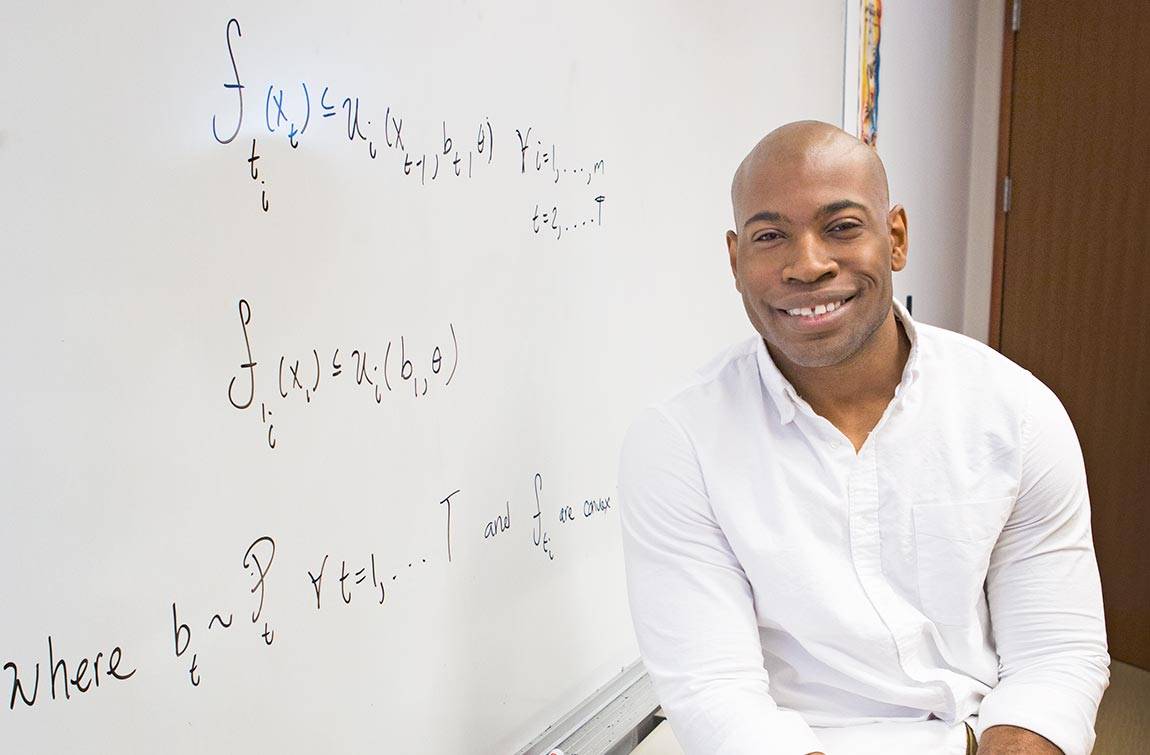 Raymond Perkins, a graduate student in operations research and financial engineering, conducts research on computational stochastic optimization, which has applications in everyday decision-making, such as how to invest for retirement. (Photo by Denise Applewhite, Office of Communications)

Background: From Columbia, South Carolina; earned his undergraduate degree in mathematics and economics from Morehouse College.

Research focus: "I currently work on computational stochastic optimization, specifically high-dimensional and sequential decision problems. That's just a technical way of saying that I study how to make decisions in situations where the future effects of one's actions and the future in general are uncertain. Some of my current work involves studying widely used heuristics, formalizing those strategies, and discovering computational and mathematical properties about them. Though my research specifically focuses on the technical and theoretical details, stochastic optimization in general is a very relevant and prominent aspect of everyone's life. Whether you're trying to figure out the quickest route home from work, how to invest for retirement, or how to profitably manage a power plant or airline, everyone has to makes decisions under uncertainty. I enjoy my work because there's an intuitive aspect of it that even non-engineers and non-mathematicians can appreciate and relate."

On his academic experience: "Princeton University has an academic and research reputation that is second to none. After college, I wanted an opportunity to challenge myself academically and grow as an intellectual. I believed Princeton would provide me the opportunity to do both. I also believed access to Princeton's ample resources and extensive alumni network would provide me with the resources and relationships to be competitive and successful after completing my Ph.D. I feel like I've learned a tremendous amount since I first arrived here. There are so many interesting seminars, lectures and classes to attend. There is a great opportunity to expose oneself to many new ideas and concepts without having to leave campus. I've actually sat in several seminars and courses completely unrelated to my own research. With such a great collection of faculty and lecturers available, I would have considered it frivolous and irresponsible not to take advantage of these opportunities."

Additional activities: Executive director of Princeton Quant Trading Conference; vice president of the Black Graduate Caucus; Senior Thesis Writer's Group leader for the Department of Operations Research and Financial Engineering. Said Perkins: "Princeton is a unique social environment. I've sought a community through student organizations like the Black Graduate Caucus and acquaintances both on and off campus. I've made friends while living in graduate housing, playing sports, attending seminars in the Department of African American Studies, and participating in other events on campus." 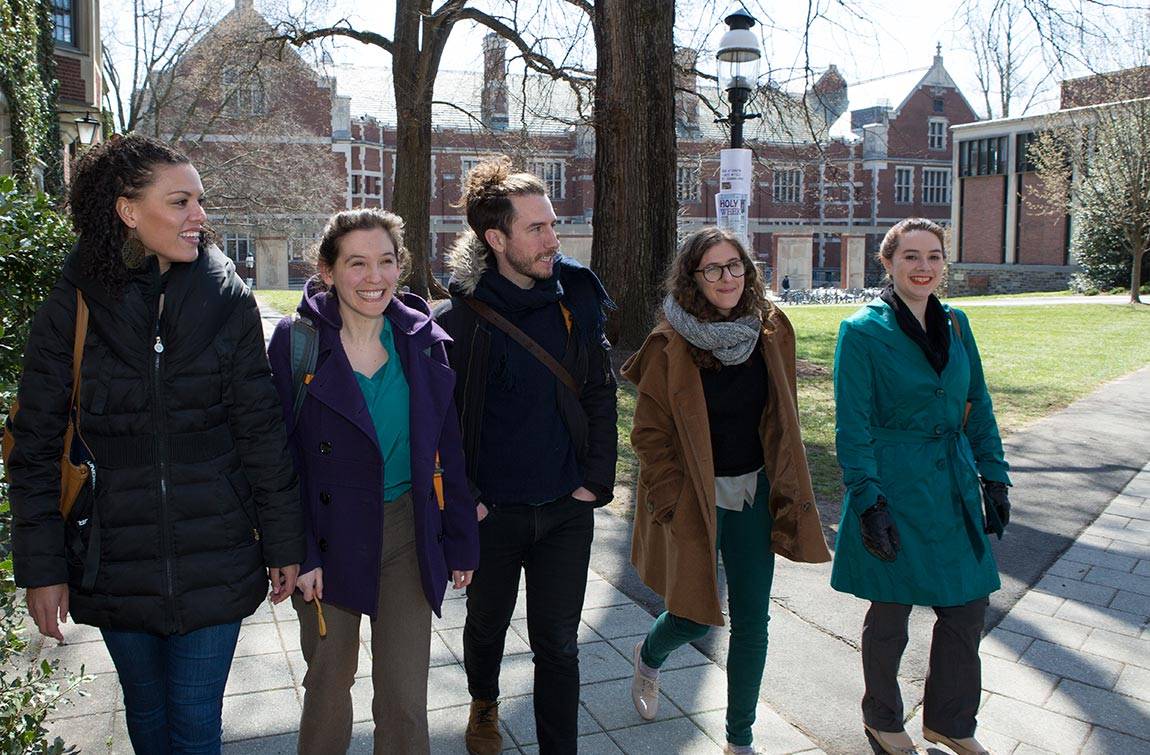 Background: Raised in the San Francisco Bay Area, California; received her bachelor's degree in religion and English at Barnard College.

Research focus: "My field is 20th-century U.S. religious history. I am particularly interested in the history of education, religion and national identity, and secularism studies, and how these areas have historically intersected with conceptions of race and gender. One overarching question in my research is: How do institutions change their presentations and practices when they shift from defining themselves as religious to defining themselves as secular? In my dissertation, I trace changes and continuities in how public school participants understood and taught morality in New York City in the 1950s and 1960s, focusing on Cold War and Civil Rights Era ideas about race and religion embedded in moral education."

Additional activities: Teaching with the Prison Teaching Initiative (PTI) for four semesters; co-organizing the Department of Religion's "What Is...?" series in 2012-13, a colloquium for graduate students to teach each other about their fields of research; establishing the Interdisciplinary Ethnography Series, currently in its third year; organizing the Gender, Sexuality, and Religion Working Group last year; for the last two years, being a Religion and Public Life Fellow at the Center for the Study of Religion, participating in a weekly interdisciplinary seminar and weekly writing group.

On her academic experience: "My department faculty open my eyes to new insights every day as leading scholars in the study of religion. I feel so grateful to get to work with them, as well as with my amazing graduate student colleagues. I have been fortunate to study with faculty and graduate students who are genuinely interested in reading and discussing my work and asking challenging questions. I also have been grateful for the opportunity to engage their fascinating and important work. The positive department community has allowed me to become a more sophisticated and attentive thinker because of the interest in and excitement for the material everyone in the department is studying, creating and revising. I have also learned much from my students in my experience teaching undergraduates, both through PTI and as an assistant in instruction for Judith Weisenfeld's 'Religion and American Film' and Jonathan Gold's 'Tibetan Buddhism' courses."