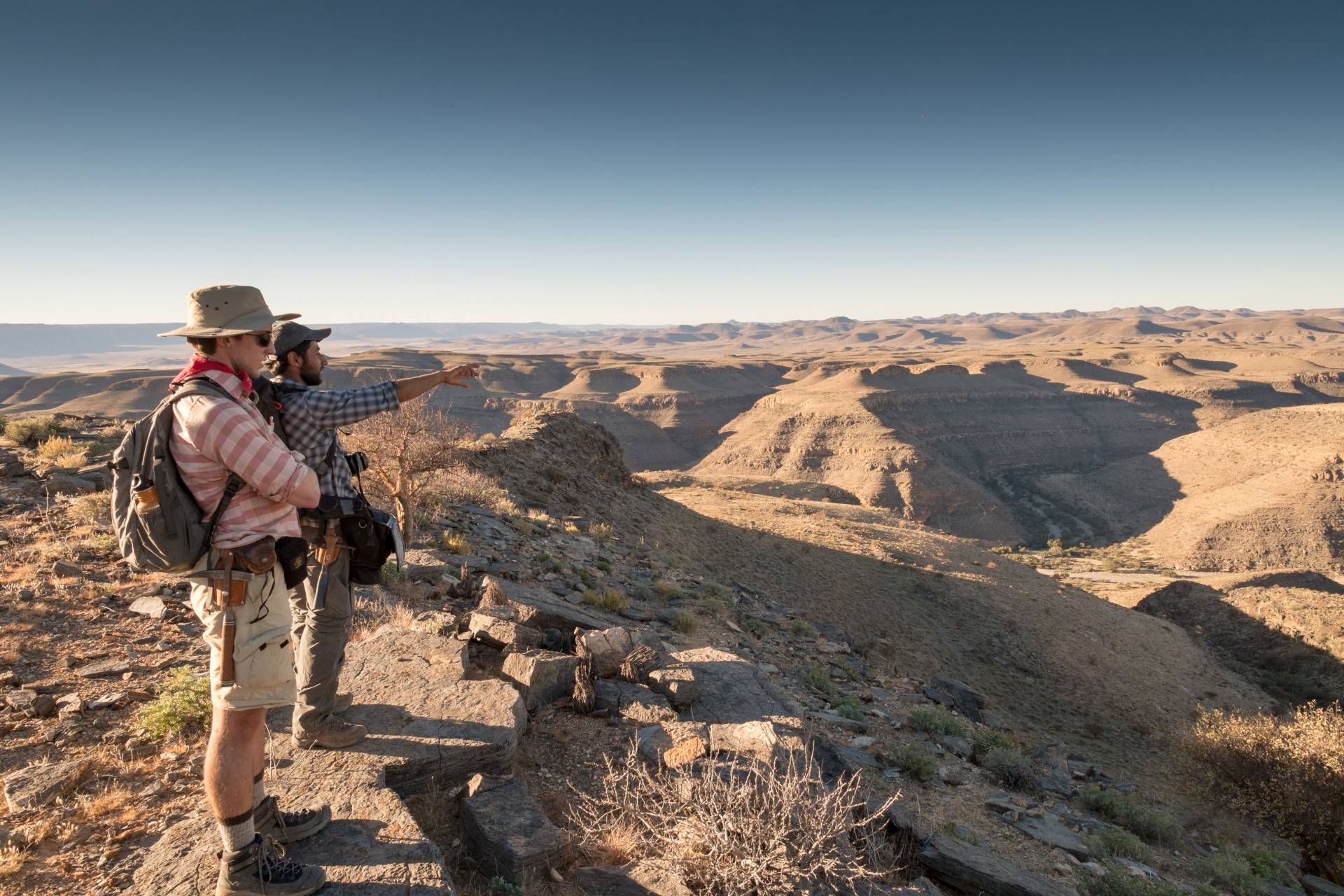 With an industrial grinder and some creative additions, Princeton geoscientists Adam Maloof and Akshay Mehra can transform rocks into three-dimensional digital landscapes. Here, Mehra (pointing) and Adrian Tasistro-Hart of the Class of 2017 prepare to gather samples of Cloudina fossils and discuss the geometry of the Cloudina-bearing patch reefs at Zebra River Farm, Namibia.

Have you ever wished you could travel inside a rock? It may sound more like magic than science, but Princeton scientists have found a way to make it (almost) true.

With an industrial grinder and a super-high-resolution camera, Princeton geoscientists Adam Maloof and Akshay Mehra can deconstruct rock samples and create three-dimensional digital versions that scientists can look at from any angle. In addition, they have developed software that allows the computer to segment images and isolate objects without human bias.

Using this technology in conjunction with detailed field observations, they examined a thin-shelled creature that lived over much of the world about 545 million years ago, Cloudina, generally agreed to be the first-ever “biomineralizer,” an organism that can create a shell or bones in addition to soft tissue.

While previous researchers had argued that Cloudina were reef builders, Maloof and Mehra were able to use their 3-D reconstruction of the creatures’ delicate tube-like structures to conclude that the fossils had been transported from other areas, suggesting that Cloudina played only a minor role in the earliest reef systems. Their work appears in the current issue of the Proceedings of the National Academy of Sciences.

“I thought going in we would learn all sorts about this amazing first biomineralizer and first reef builder, but Cloudina turned out to be more like a reef dweller,” said Maloof, an associate professor of geosciences. He has now turned his focus to the next-oldest potential reef builder, a sponge called Archaeocyathid that lived about 520 million years ago.

Cloudina had proven resistant to detailed study because its delicate casing is too fragile to extract physically from the surrounding limestone, and it could not be imaged remotely with traditional X-ray tomography techniques, which require density differences between the object of interest and the surrounding material. Because Cloudina is chemically identical to limestone, the fossils were effectively invisible to X-rays. 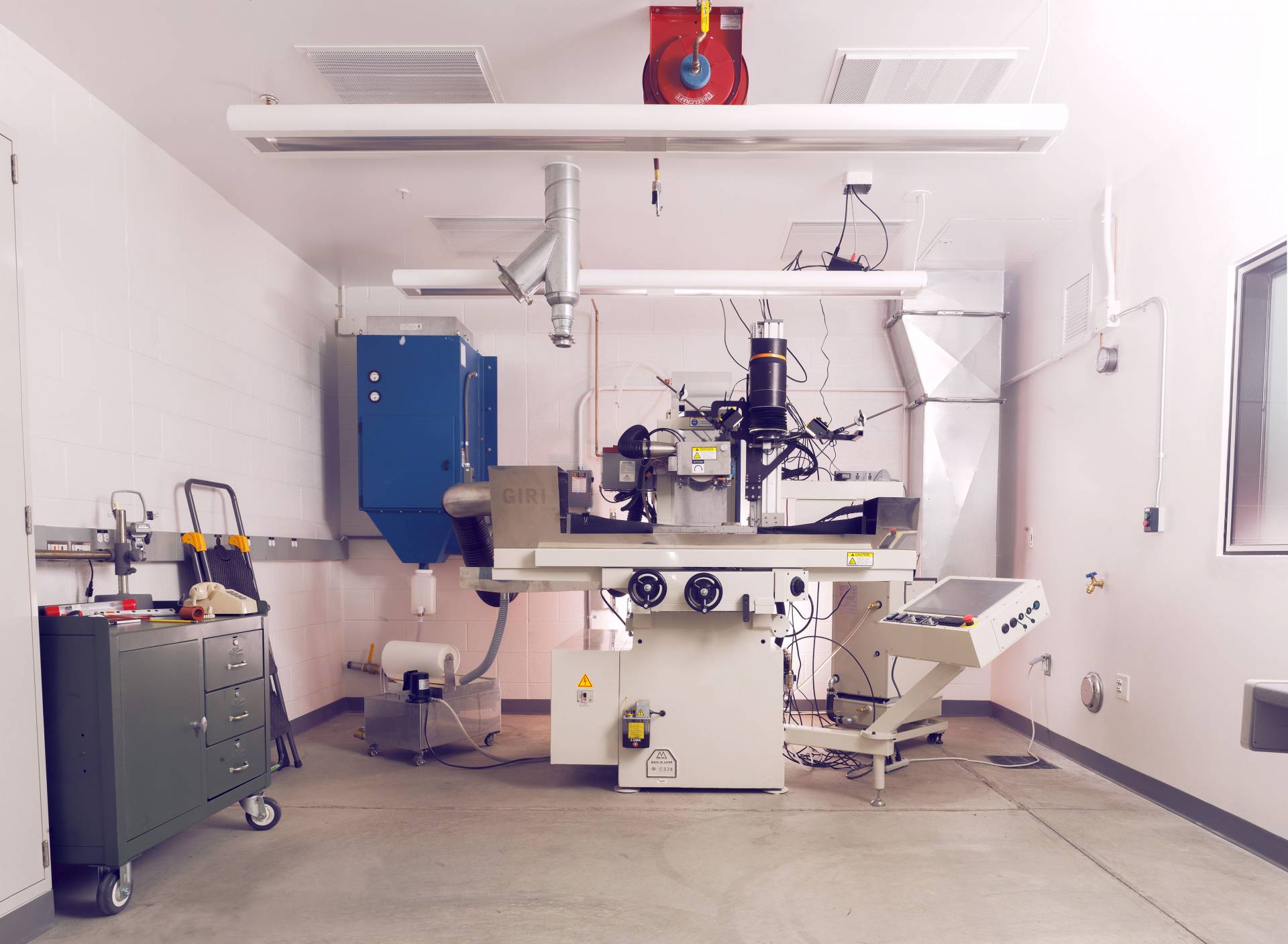 The Princeton Grinding Imaging and Reconstruction Instrument (GIRI) includes an industrial grinder, various imaging systems, lights and a powerful magnet to hold the sample in place. After the diamond or silicone wheel removes as little as a few microns, the sample moves over for a high-resolution picture and is then moved back.

Almost five years ago, Maloof and Situ Studio collaborator Brad Samuels assembled the technology to create what he now calls “flipbooks,” digital renderings that move through more than a thousand wafer-thin slices through a rock. Known as “GIRI” or “the grinder,” the Princeton Grinding Imaging and Reconstruction Instrument is an answer to geologists’ long-standing desire to know what rocks look like on the inside.

“Forever — since Darwin — people have tried to figure out how fossils look in 3-D, when they’re embedded in rock and it’s hard to get them out,” Maloof said. “People did serial sections just like this way back then — but perhaps not at this scale — where they would grind away a little rock, draw it, grind a little more, draw it. … It can be incredibly time-consuming.”

Enter GIRI, which can cut slices as thin as a few microns (less than 1 percent of a millimeter) and can run 24 hours a day for weeks on end. As each slice takes about 90 seconds to cut and image, researchers have to choose between speed and scale. Most of the specimens Maloof and Mehra have imaged are cut into 30-micron slices, about a third the thickness of a human hair. A typical inch-thick, 1,500-slice sample takes about a day and a half to grind and image; during this time, the operator needs to replace machine fluids and clean the wipers (which clear the surface after each cut) only once.

“The process is destructive,” Maloof said. “Dinosaur bones, lunar samples — there are certain specimens that people are less likely to give us. It hasn’t really stopped us, because most samples are not precious. Cloudina, there are zillions of them — we could never grind them all.”

GIRI can produce a 3-D rendering of any solid object, whether or not it has the density differences needed for effective X-ray computed microtomography (usually known as X-ray CT or Micro CT). In addition, because you’re taking a super-high-resolution photograph with every slice, you’re always seeing the rock itself, not just the density model that remote sensing can provide.

“It’s destructive of course, that’s the disadvantage, but what’s so nice is that you get to see photographs and make direct observations,” Maloof. “That’s what’s been so life-changing to me: I love that it’s not a model. You can just see it. On any given slice, if you find something great, you can just find the slice and say, ‘What did it look like?’ …We’re on a virtual tour inside, rather than looking at waveforms and trying to interpret them.” 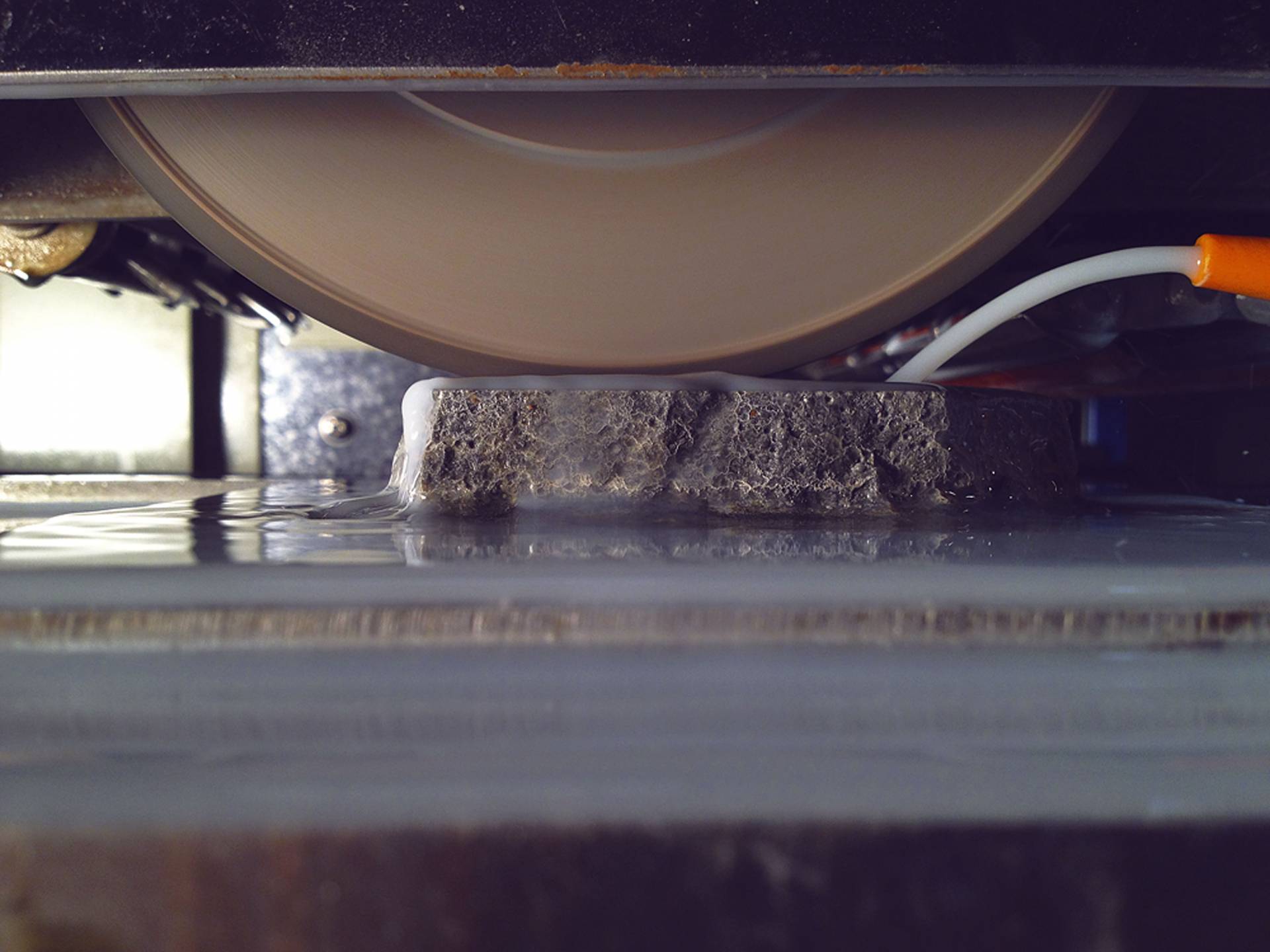 A diamond wheel grinds a sample in the Princeton Grinding Imaging and Reconstruction Instrument (GIRI) in the Grinder Lab behind Guyot Hall.

And while GIRI does pulverize the sample, it preserves every detail in its high-resolution images, Maloof said, which arguably makes it less destructive than other approaches. It also preserves the structural information that reveals how the rocks formed. “When people have attempted to get 3-D information from rocks like this that are opaque to X-rays, they’ve always tried to dissolve the material out. But then you lose all the in-situ information. You don’t know how the fossils or other embedded objects grew. They have no relationship to each other. And you don’t know how they are related to perhaps smaller or less resilient parts. You may preferentially dissolve the ornamentation or other key details. So this is a way to keep them in their habitat while still trying to figure out what they looked like.”

In the years since Maloof assembled GIRI, he and his research team have made physical improvements. These include redesigning and replacing the camera housing as well as the mechanism for wiping and preparing the rock surface for photographing after each grind. They’ve also installed monitors for temperature and humidity to record conditions during every photograph. The researchers also cut down the grind time per slice from seven minutes to 90 seconds. The biggest changes, though, have been improving software to run the machine and analyze the output.

Using a collection of interactive MATLAB scripts and Applescript functions, the control computer can now send and receive signals from the grinder, trigger the shutter, and verify image capture, all while GIRI is in operation, Mehra said.

“From the ground up, Akshay has designed machine-learning solutions to make the process of image segmentation — differentiating fossils from matrix, cement, etc., in every slice — automated and reliable,” said Maloof. “He has developed techniques that ultimately will be important for any tomographic applications, including X-ray CT. Akshay also has developed ways to make quantitative measurements in the reconstructed 3-D volumes. You’d be surprised how much 3-D modeling out there only leads to visualization and qualitative interpretation, whereas Akshay actually measures the size, shape and 3-D orientation of these critters.” 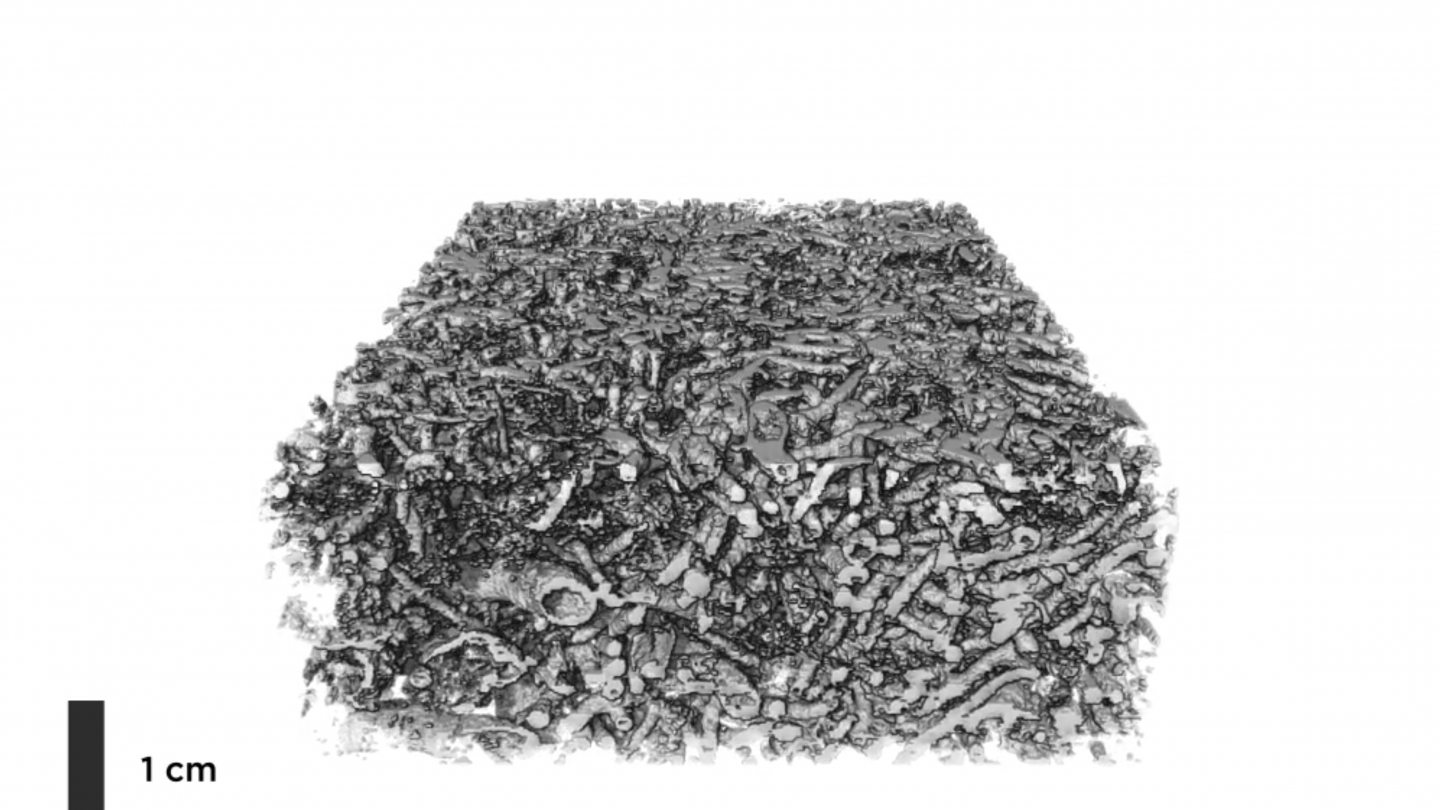 This reconstruction of the Cloudina sample was created after Mehra trained the neural network to distinguish fossils from surrounding stone, so he could produce this model showing only the fossil tubes.

Using the software that he has developed, “We can directly measure these Cloudina specimens,” said Mehra. “We can directly measure what directions the tubes are bending, what their diameters are, what their curvatures are — none of them are actually straight — and based on that information, we can determine whether they are in situ or not in situ.”

Mehra has also designed neural networks to identify rock types by only their visual properties: color and texture. After the user defines which “classes” are present in a handful of images from the stack —fossil versus matrix, for example, or the key minerals in a metamorphic rock — the network can then predict whether a pixel belongs to a given class with greater than 90 percent accuracy.

And with all of that, he said, undergraduate and graduate students can typically be trained to run GIRI in about a day.

Scientists from around the world have reached out to Maloof and Mehra to ask for virtual, visual tours inside their own specimens. Paleontologists are hoping to examine the delicate structures from the earliest life on Earth, the huge range of early shelled creatures, the first fish, the first land creatures, the internal structure of ammonites and other organisms with internal buoyancy systems, and even dinosaur bones. Planetary scientists have begun examining meteorites with GIRI to look at tiny grains called chondrules that contain hints to how the planets formed. Engineers are testing possible reservoir rocks for carbon sequestration and grinding graphite batteries to examine the 3-D structure of porosity within the carbon.

There’s really no limit to the contributions GIRI can make, said Maloof. “This represents five years of work. It’s the only instrument in the world like it.”

The paper, “Multiscale approach reveals that Cloudina aggregates are detritus and not in situ reef constructions” by Akshay Mehra and Adam Maloof appears in the Feb. 26 issue of the Proceedings of the National Academy of Sciences. Their research was supported by the National Science Foundation Earth Sciences Grant 1028768 the Princeton Tuttle Invertebrate Fund.