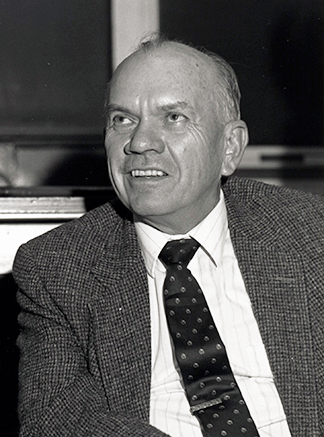 Photo from the Office of Communications

View or share comments on a blog intended to honor Moore's life and legacy.

Moore specialized in algebraic topology and had many important concepts named after him, including the Borel-Moore homology published in 1960, and the Eilenberg-Moore spectral sequence published in 1962. In 1965, he published his most cited paper, which pertained to Hopf algebras, with renowned mathematician and Stony Brook University mathematics professor John Milnor, who received his bachelor's and doctoral degrees in mathematics from Princeton in 1951 and 1954, respectively, and served as a Princeton professor of mathematics from 1960 to 1967.

Peter May, a University of Chicago professor of mathematics and graduate student under Moore in the early 1960s, said that his former mentor belonged to a "great generation" of mathematicians, many of them algebraic topologists, who were hugely influential. May published a paper in 2014 that drew heavily from the Eilenberg-Moore spectral sequence 52 years after the concept was published.

"I was completely influenced by him," said May, who received his doctorate in mathematics from Princeton in 1964. "He was very algebraic and brought a level of algebraic sophistication to the subject that I don't think it had before him."

Moore brought deep algebraic structure to algebraic topology, May said. His work reflected his profound and constant thinking about mathematics, May said. Moore would ruminate on mathematical problems even if he were in the middle of another task. May recalled that if Moore made a mistake or got stuck during a class, he would stop everything and silently ponder the error until the correct answer came to him. So deep was he in thought that Moore never recalled these instances afterward, May said.

"He would step back from the blackboard, and just stare at it and think. It had the rest of us thinking along with him and trying to solve the problem, too," May said. "He really was totally committed to mathematics. He wanted to understand everything and he wanted you to participate in everything that went into that understanding."

Moore, who never married, seemed almost wholly dedicated to mathematics, May said. "He was a very unworldly man in many respects," he said. "His interactions, at least with me, were totally focused on mathematics. "

Moore embodied a "Princeton style" that made him a challenging and influential presence in the careers of his students, said Joseph Neisendorfer, a professor of mathematics at the University of Rochester who received his Ph.D. in mathematics from Princeton in 1972. Because of Moore's style, his students would write theses that "almost without exception" were significant advances in mathematics, Neisendorfer said.

"There's a certain Princeton style that focuses on precision, centrality and simplicity. He was a superb mathematician and he exercised a lot of influence by imparting his style to his students," Neisendorfer said. "He epitomized the Princeton style."

Neisendorfer recalled taking long walks in the Institute Woods to think after his weekly meetings with Moore: "It was an intense experience to be his grad student, in a good way. You were always on your toes. Meeting with him was an intense weekly exercise."

After Moore left Princeton, he joined Neisendorfer at the mathematics department at the University of Rochester. Among the challenges made available to some graduate students in the department was a series of one-on-one sessions with Moore where they had to present their ideas to his dissecting intellect.

With his quick mind and quiet demeanor, Moore could make complex mathematics look effortless, Neisendorfer said. He recalled that a few years after leaving Princeton he spent an entire summer in Europe pondering the homotopy groups of Moore spaces with Fred Cohen, a University of Rochester mathematics professor who had had May as his doctoral adviser at the University of Chicago. Cohen, Neisendorfer and Moore would eventually publish an influential paper on these homotopy groups in 1987. Neisendorfer recalled that after that trip, however, he visited Moore and went into a lengthy, sprawling explanation as Moore sat silently before finally replying.

"He just said, 'If it's true, it can't be that complicated,'" Neisendorfer said, laughing. "He proceeded right there in his chair to come up with the most brilliant, non-obvious way to do it. In five or 10 minutes he came up with it. I wished he'd been with us all summer! We wouldn't have wasted so much time.

"We had been hitting away at this problem with sledgehammers and he just pulled out his sabre and ZIP!" Neisendorfer said. "It was very much his style. He believed in doing hard things simply and in a clever way."

Although he appreciated cleverness, Moore always considered the overall relevance of his — and his students' — work to the field, Neisendorfer said.

"He did hard things in clever ways, but he didn't like arguments that were too clever," Neisendorfer said. "He didn't want something you could use once and it wouldn't be useful anymore. He wanted an argument that was useful in the long run. That's why so many of his students had influential theses."

Moore was born May 27, 1923, in New York City. He was a National Science Foundation Fellow from 1953 to 1955 and chair of the United States Commission on Mathematical Instruction from 1960 to 1962. Moore is survived by a niece, Jennifer West, and nephew, Jeff West.