The persistence of the massive, explosive fissures on the surface of Saturn's sixth-largest moon, Enceladus — despite the moon's astoundingly frigid surface — have remained a mystery for 11 years. Researchers from Princeton University and the University of Chicago show, however, that the fissures could be kept active by the sloshing of water in the vast ocean that scientists suppose is beneath the moon's thick ice shell. The findings could help provide a clear objective for future satellite missions to Enceladus, which scientists suspect could host life.

Known as the "tiger stripes," the fissures of Enceladus regularly emit towering plumes of vapor and frost particles that might be powered by tidal forces exerted on the moon's icy shell by Saturn, the researchers reported in the journal the Proceedings of the National Academy of Sciences. The four tiger stripes are near Enceladus' southern pole, average around 130 kilometers (81 miles) long and are spaced roughly 35 kilometers (22 miles) apart. They were first observed in 2005 by NASA's unmanned Cassini spacecraft that has orbited Saturn and its moons since 2004. Cassini data have strongly indicated that the moon's plumes probably originate in a biomolecule-friendly oceanic environment. 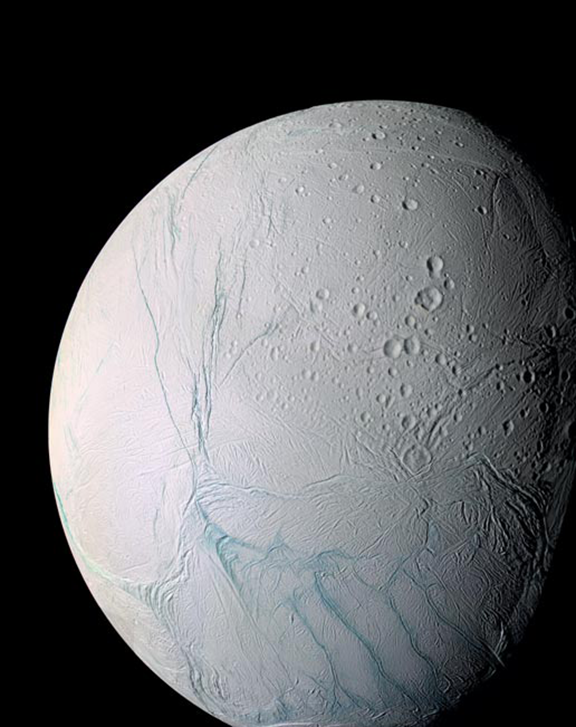 Researchers from Princeton University and the University of Chicago show that the mysterious persistence of the massive fissures known as "tiger stripes" on the surface of Saturn's sixth-largest moon, Enceladus, could be sustained by the sloshing of water in the vast ocean beneath the moon's thick ice shell. The findings could help provide a clear objective for future satellite missions to the Enceladus, which scientists suspect could host life. The enhanced-color image above shows the four tiger stripes (lower right) in the south polar region of Enceladus. (Photo by NASA/JPL/Space Science Institute)

Since Cassini's initial observation of the fissures and their plumes, scientists have worked to explain their cause, size and regularity, explained Edwin Kite, an assistant professor of geophysical sciences at the University of Chicago who initiated the research at Princeton as a postdoctoral researcher ingeosciences and astrophysical sciences.

"On Earth, eruptions don't tend to continue for long," Kite said. "When you do see eruptions that continue for a long time, they'll be localized into a few pipe-like eruptions with wide spacing between them."

Kite and co-author Allan Rubin, a Princeton professor of geosciences, developed a model that suggests that the water in the slots alternately rises and falls as the slots are flexed by tidal stresses in Enceladus' icy shell. The heat that this regular motion produces is sufficient to keep the water from freezing even though the moon is encased in ice roughly 30 kilometers (19 miles) thick.

Kite and Rubin's model provides a seemingly simple explanation for observations that have defied such simple explanations in the past, Rubin said. Previous proposals, such as that the tiger stripes are faults that melt the ice by frictional heating, fail to explain the Cassini evidence that the erupted material comes from Enceladus' underlying ocean. Kite approached Rubin with the idea behind the model because of Rubin's past specialization in the transport of molten rock through fissures on Earth. Nonetheless, when Kite suggested that viscous heating could keep the water in the slots from freezing, Rubin was initially skeptical.

"Because the viscosity of water is so low, I doubted it would produce sufficient heat," Rubin said. "But Kite's calculations show that not only does it produce sufficient heat, it does so while getting the time lag between the peak tidal stresses and the peak plume activity just about right. To me, this is the first model that seems to explain these perplexing observations so naturally."

The model could be applied to other icy worlds such as the Jovian moon Europa, which also hosts a subsurface ocean and is often mentioned as the planetary body other than Earth most likely to host life. "Enceladus could be added to that list," Rubin said. "Direct passages to the subsurface oceans of these satellites are possible windows into environments that host life."

Assuming that the tiger stripes do connect to Enceladus' ocean, future satellite missions could be outfitted with sensors and machinery to gather potential evidence of life on the moon, Rubin said. Cassini performed its final flyby of Enceladus Dec. 19.

The tiger stripes of Enceladus regularly emit towering plumes of vapor and frost particles, as seen above. NASA's unmanned Cassini spacecraft first observed the fissures in 2005 and its data strongly indicates that the plumes probably originate in a biomolecule-friendly oceanic environment. Since Cassini's initial observation, scientists have worked to explain their cause, size and regularity. The researchers suggest that the plumes originate from water in the fissures that alternately rises and falls as the slots are flexed by tidal stresses in Enceladus' icy shell. The heat this regular motion produces keeps the water from freezing. (Photo by NASA/JPL/Space Science Institute)

Carolyn Porco, head of Cassini's imaging science team and a leading scientist in the study of Enceladus, said that Kite and Rubin's work addresses a number of puzzling questions about the moon's fissures.

For instance, the eruption plumes reach their peak approximately five hours later than expected, even when taking into account the 40 minutes needed for the erupted particles to reach the altitude at which Cassini can detect them. Other scientists had previously suggested reasons for the lag, which included a delay in the eruptions as well as a squishy, slowly responding ice shell.

Kite and Rubin found that there is instead an optimal width for the tiger stripe slots that would match the timing of the plumes. The width of the slots affects how quickly they can respond to the tidal forces. With wide slots, the eruptions respond quickly to tidal forcing, Kite said. With narrow slots, the eruptions occur eight hours after the tidal forces reach their peak. "In between there's a sweet spot," he said, where tidal forces turn water motion into heat, generating enough power to produce eruptions that match the observed five-hour lag. Porco called it "the best thing in my mind about this new work."

"I was very happy to see this new work by Kite and Rubin that brings to the fore a process that had escaped notice — the pumping of water in and out of the deep fractures of the south polar ice shell by tidal action," Porco said. "The new proposal is really a way to get a delay in the eruptions. You really don't need to propose any terribly squishy ice shell to do it."

Kite and University of Chicago geophysical sciences professor Douglas MacAyeal are interested in studying an Earth analogue to the Enceladus geysers, a crack that has formed across a section of the Ross Ice Shelf in Antarctica, partially breaking it away from the continent.

"In that crack you have strong tidal flow," Kite said, "so it would be interesting to see what a real ice sheet does in an environment that's analogous in terms of the amplitude of the stresses and the temperatures of the ice."

The paper, "Sustained eruptions on Enceladus explained by turbulent dissipation in tiger stripes," was published in the April 12 edition of the Proceedings of the National Academy of Sciences. Princeton University funded the research.

The University of Chicago contributed to this story.