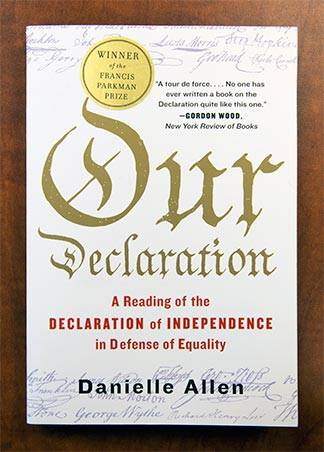 The Princeton Pre-read began in 2013 and has continued with a new selection each year.

Before arriving for Orientation in September, members of Princeton's Class of 2020 will read "Our Declaration: A Reading of the Declaration of Independence in the Defense of Equality" by political philosopher Danielle Allen.

President Christopher L. Eisgruber selected the book for this year's Pre-read, an introduction to the intellectual life of the University that centers on a book that first-year students and others in the Princeton community read.

This summer, each member of the Class of 2020 will receive a copy of the book, a re-examination of the 1,137-word Declaration of Independence, a document that altered the course of history. Allen, a member of Princeton's Class of 1993, is director of the Edmond J. Safra Center for Ethics and professor in the Department of Government and in the Graduate School of Education at Harvard University.

"Danielle Allen's 'Our Declaration' is a profound and engaging book that speaks to urgent questions about the relationship of liberty to equality, the significance of historical legacies, and the meaning of political documents," Eisgruber said. "I look forward to discussing the book with Princeton's Class of 2020 and to welcoming Danielle back to campus."

Allen encouraged Pre-read participants to be prepared to look at the document in a new way.

"I hope people come to see that the Declaration deserves to be taken seriously as a profound and original philosophical argument about the nature of democratic equality," she said. "Though it did have what we might call propagandistic purposes, it can't be reduced to propaganda, and although it was at the center of turbulent historical events, it's about a lot more than a timeline of important actions. It's a true philosophic contribution."

During Orientation, freshmen will have the opportunity to discuss the book with Allen and student leaders. Throughout the coming academic year, Eisgruber will meet with students in residential colleges and across campus to discuss the book.

The Pre-read builds on another tradition for freshmen, the Pre-rade, in which incoming students enter campus together through FitzRandolph Gate.

The book is "fundamentally an exercise in close reading," a valuable skill for the students at Princeton and beyond, Eisgruber said.

"'Our Declaration' draws upon Professor Allen's deep knowledge of history, classics and government to illuminate the text of the Declaration of Independence for contemporary readers," Eisgruber said. "But it is much more than a historical study, and, though it focuses on an American document, its argument — like the Declaration itself — addresses readers of every nationality."

Allen offered one piece of advice to readers.

"I would encourage everyone to take the time to read the Declaration of Independence itself out loud once with someone else," she said. "If you do that, before you start reading, the book itself will be more fun."