Pluto has some characteristics less like that of a comet and more like much larger planets, according to the first analysis of Pluto's interaction with the ubiquitous space plasma known as solar wind.

Researchers using data gathered by NASA's New Horizons spacecraft on its flyby of Pluto in July 2015 have for the first time observed solar wind coming off Pluto and found that their interaction is unique — and unexpected. The researchers reported May 4 in the American Geophysical Union's Journal of Geophysical Research: Space Physics that astrophysicists now have a treasure trove of information about how Pluto's atmosphere interacts with the solar wind. Solar wind is the plasma, or charged particles, that spews from the sun into the solar system at a supersonic 1 million mph, bathing planets, asteroids, comets and interplanetary space in a soup of mostly electrons and protons. 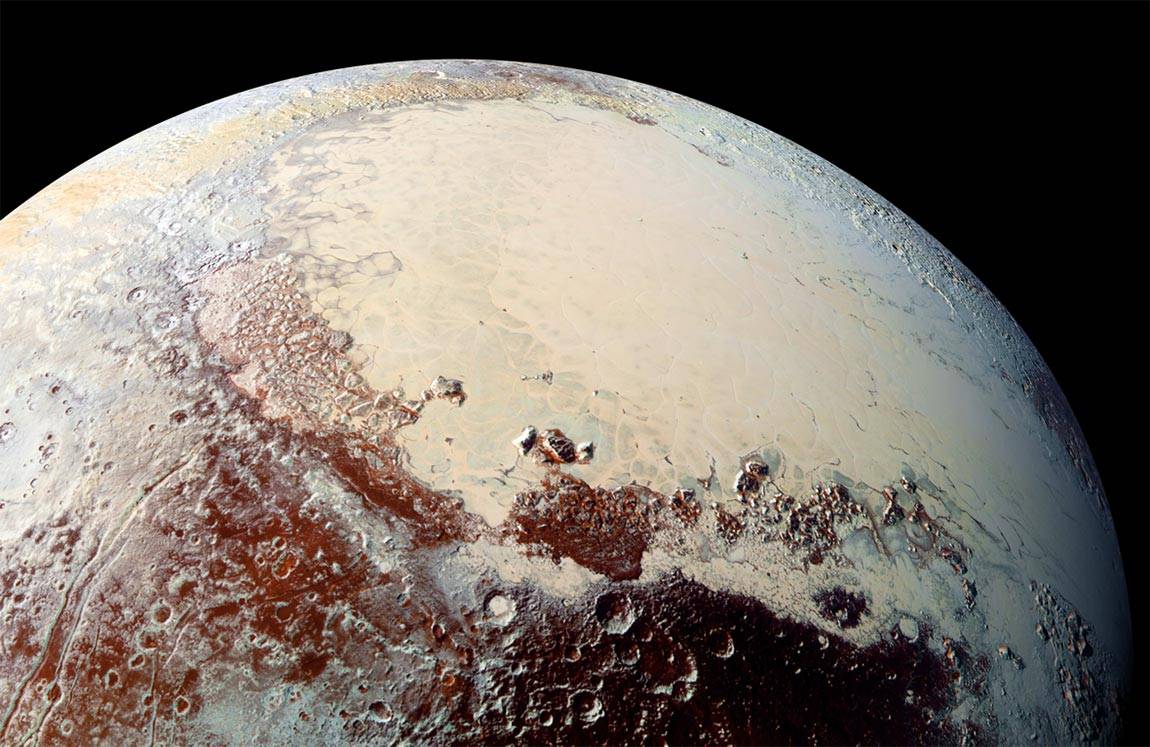 The first analysis of Pluto's interaction with the ubiquitous space plasma known as the solar wind found that Pluto has some unique and unexpected characteristics that are less like a comet and more like larger planets. Previously, most researchers thought that Pluto was characterized more like a comet, which has a large region of gentle slowing of the solar wind, as opposed to the abrupt diversion of solar wind that a planet such as Mars or Venus would have. (Courtesy of NASA/Johns Hopkins University Applied Physics Laboratory/Southwest Research Institute)

"This is a type of interaction we've never seen before anywhere in our solar system," said lead author David McComas. McComas, a professor in Princeton University's Department of Astrophysical Sciences and vice president for the Princeton Plasma Physics Laboratory, leads the Solar Wind Around Pluto (SWAP) instrument aboard New Horizons; he also led development of SWAP when he was at the Southwest Research Institute in Texas.

"The results are astonishing. We were fascinated and surprised," McComas said. Previously, most researchers thought that Pluto was characterized more like a comet, which has a large region of gentle slowing of the solar wind, as opposed to the abrupt diversion of solar wind that a planet such as Mars or Venus would have. Instead, like a car that's part gas- and part battery-powered, Pluto is a hybrid, the researchers said.

"This is an intermediate interaction, a completely new type. It's not comet-like, and it's not planet-like. It's in-between," McComas said. "We've now visited all nine of the classical planets and examined all their solar wind interactions, and we've never seen anything like this."

"These results speak to the power of exploration," said Alan Stern, New Horizons' principal investigator at the Southwest Research Institute. "Once again we've gone to a new kind of place and found ourselves discovering entirely new kinds of expressions in nature. Many people were surprised by Pluto's complex geology and atmosphere. This paper shows there's even more that's surprising there, including its atmosphere-solar wind interaction."

Pluto continues to confound. Since it's so far from the sun — an average of about 3.7 billion miles — and because it's so small, scientists thought Pluto's gravity would not be strong enough to hold heavy ions in its extended atmosphere. But "Pluto's gravity clearly is enough to keep material sufficiently confined," McComas said.

Further, the scientists found that very little of Pluto's atmosphere is comprised of neutral particles converted to electrically charged ions and swept out into space.

"This is backwards for many other planets, where the neutral particles stay relatively close to the planet," said Michael Liemohn, a University of Michigan astrophysicist not involved with the research but who helped edit the paper.

"An ion particle becomes influenced by the electric and magnetic forces present in the solar system, which can be a very efficient acceleration processes," Liemohn said. "But at Pluto, McComas, et al., found that only a wisp of atmosphere leaves the planet as ions."

This figure shows the size scale of the interaction of Pluto (at lower left) with the solar wind. Scientists thought Pluto's gravity would not be strong enough to hold heavy ions in its extended atmosphere, but Pluto, like Earth, has a long ion tail (red) loaded with heavy ions from the atmosphere. Pluto has a very thin "Plutopause" (purple), or the boundary of Pluto's tail of heavy ion tail and the sheath of the shocked solar wind (blue) that presents an obstacle to its flow. (Courtesy of the American Geophysical Union)

The researchers were able to separate the heavy ions of methane, the main gas escaping from Pluto's atmosphere, from the light ions of hydrogen that come from the sun using the SWAP instrument. Among their other Pluto findings:

• Like Earth, Pluto has a long ion tail that extends downwind at least a distance of about 100 Pluto radii (73,800 miles, almost three times the circumference of Earth), loaded with heavy ions from the atmosphere and with "considerable structure."

• Pluto has a very thin "Plutopause" — or boundary of Pluto's tail of heavy ions and the sheath of the shocked solar wind that presents an obstacle to its flow.

Heather Elliott, an astrophysicist at the Southwest Research Institute and co-author on the paper, said that the study provides interesting comparisons. "Comparing the solar wind-Pluto interaction to the solar wind interaction for other planets and bodies is interesting because the physical conditions are different for each, and the dominant physical processes depend on those conditions," Elliott said.

The scientists conclude: "The SWAP data will … be reanalyzed … for many years to come as the community collectively grapples with Pluto's unique solar wind interaction — one that is unlike that at any other body in the solar system."

The paper, "Pluto's Interaction with the Solar Wind," was published May 4 by the Journal of Geophysical Research: Space Physics. The research was funded as a part of NASA's New Horizons mission.