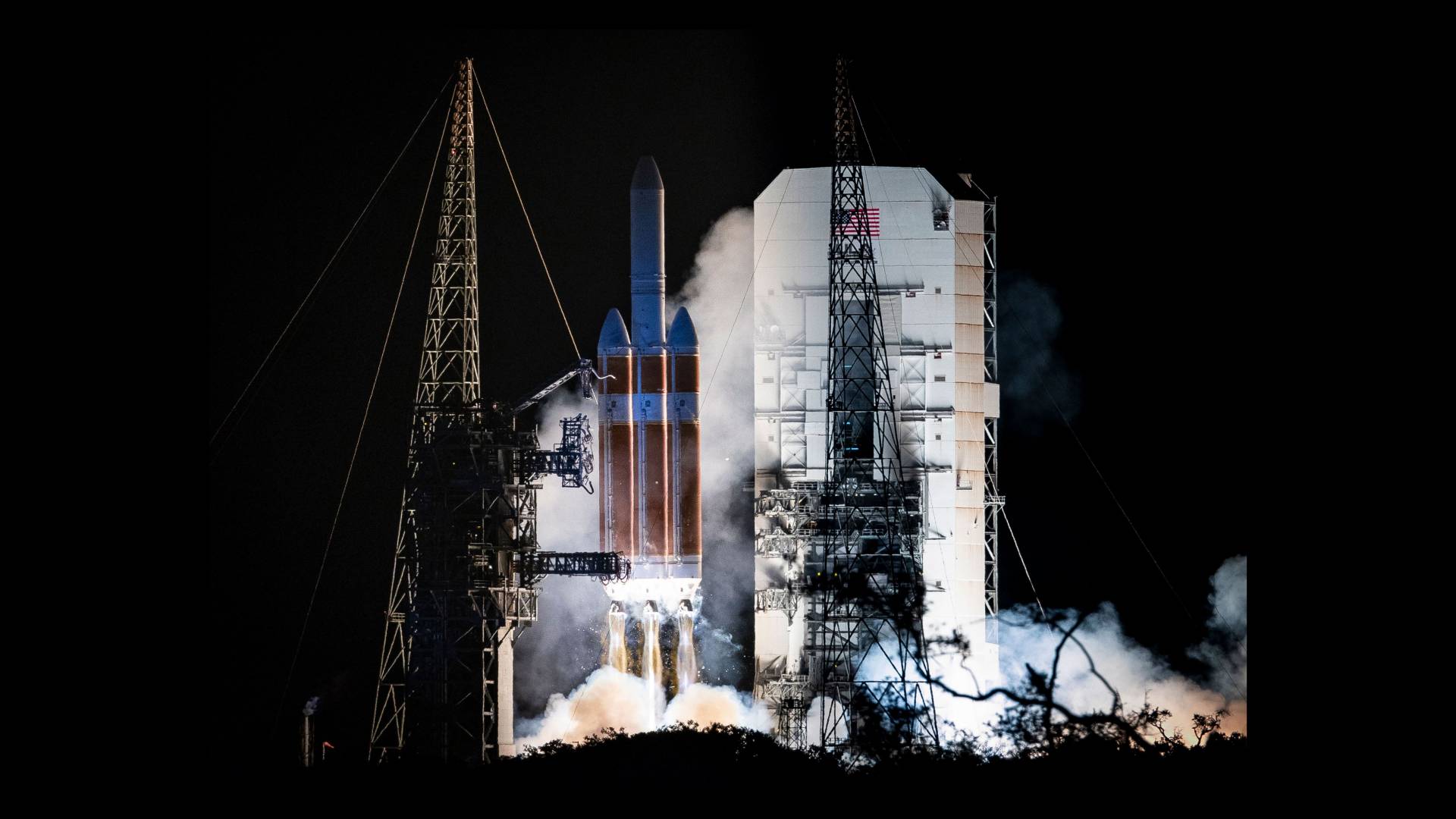 The Delta IV Heavy rocket carrying NASA's Parker Solar Probe lifted off at 3:31 a.m. on Sunday, Aug. 12, from Cape Canaveral Air Force Station. The mission, including the Princeton-led ISʘIS instrument suite, will perform the closest-ever observations of a star as it travels through the sun's atmosphere, called the corona.

CAPE CANAVERAL, Florida — On Aug. 12 at 3:31 a.m., three massive booster engines lifted a Delta IV Heavy rocket carrying the Parker Solar Probe — including  ISʘIS, an instrument suite led by Princeton’s David McComas — away from the launch pad at Kennedy Space Center. Over the next 43 minutes, spent fuel tanks and equipment dropped away, until the car-sized spacecraft soared freely toward its first rendezvous with Venus and then the sun. 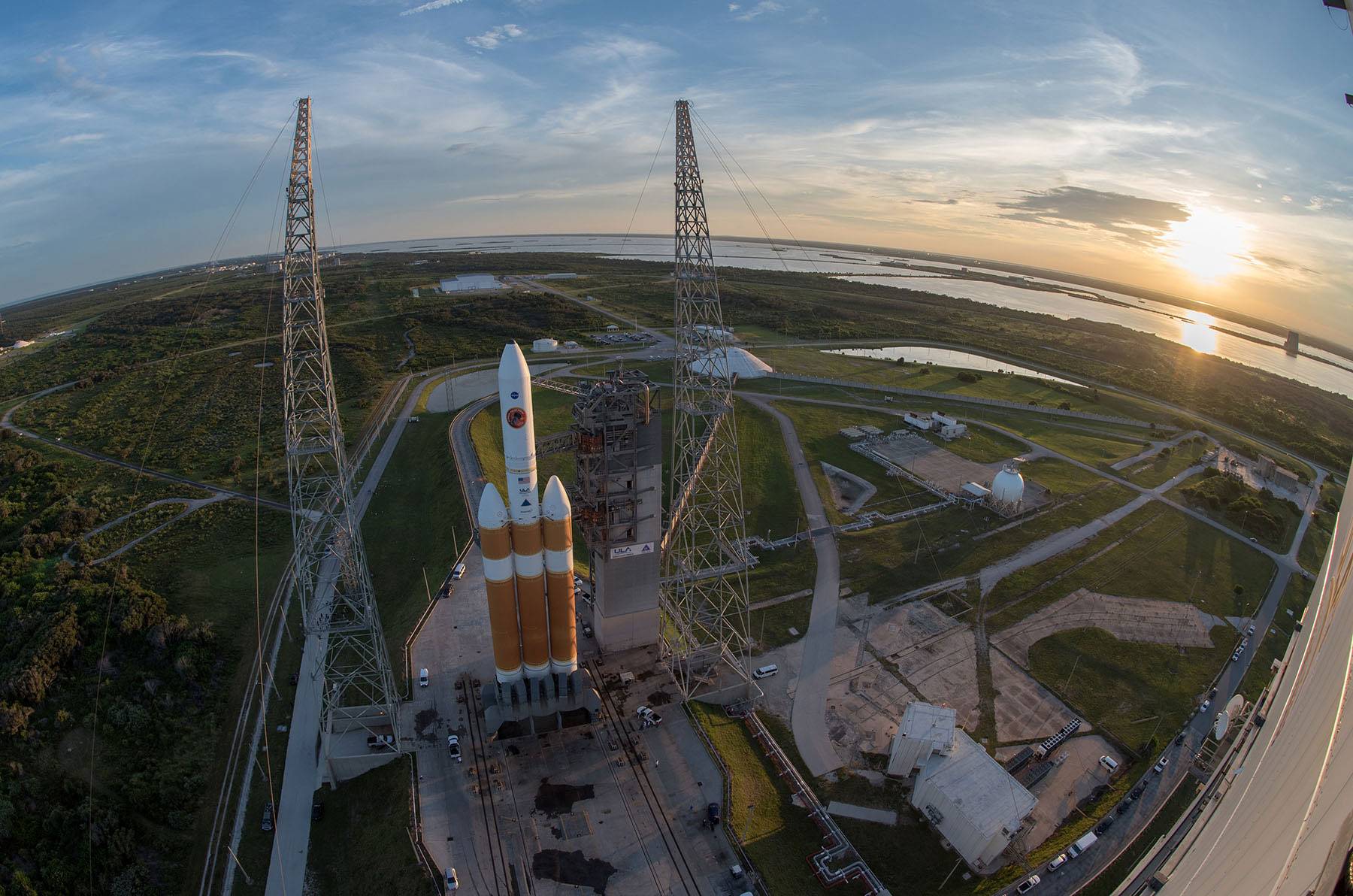 The mobile service tower rolled back from the rocket on Aug. 10, in preparation for launch.

In early November, the probe will make its first pass through the corona, the sun’s fiery atmosphere, gathering in-situ measurements that scientists hope will unlock long-standing mysteries about our nearest star.

“We’ve been studying the sun remotely for a really long time, but we’ve never flown through the atmosphere of the sun,” said McComas, a professor of astrophysical sciences at Princeton University and the vice president of the Princeton Plasma Physics Laboratory. “We have fundamental questions: How do you get a million-degree corona above the sun’s 5,000-degree surface? How do you get a million mile-per-hour solar wind blowing out? How do you get highly energetic particles up to such high energies?  We don’t know the answers to those questions, and we never will until we can get there to observe it directly.

“This is that mission.”

McComas is the principal investigator for the Integrated Science Investigation of the Sun (ISʘIS, pronounced EEE-sys and using the symbol of the sun in the middle of the acronym), which is one of the four instrument suites aboard the probe. ISʘIS has two instruments, EPI-Lo and EPI-Hi, to measure both low- and high-energy particles from the sun’s corona and the solar wind. Those particles can disrupt GPS and other satellites, and understanding them is key to astronaut safety for human space travel beyond Earth’s magnetic field. Learning more about these particles will also shed light on other stars and their solar systems.

“The sun is just an average star,” said Nicky Fox, the project scientist for the Parker Solar Probe. “We love it, because it’s our sun, but it’s just an average star. By going in close and learning about how our star works, we can also get amazing knowledge about how other stars in other solar systems work, and how the planets around them may be affected by their stellar wind or stellar storms.”

The Parker Solar Probe lifted off successfully on its second launch attempt. The first attempt, 24 hours earlier, had experienced a series of “holds” and delays that took up the 65-minute launch window. On its second attempt, on Sunday, Aug. 12, the rocket ignited the minute the launch window opened, at 3:31 a.m. 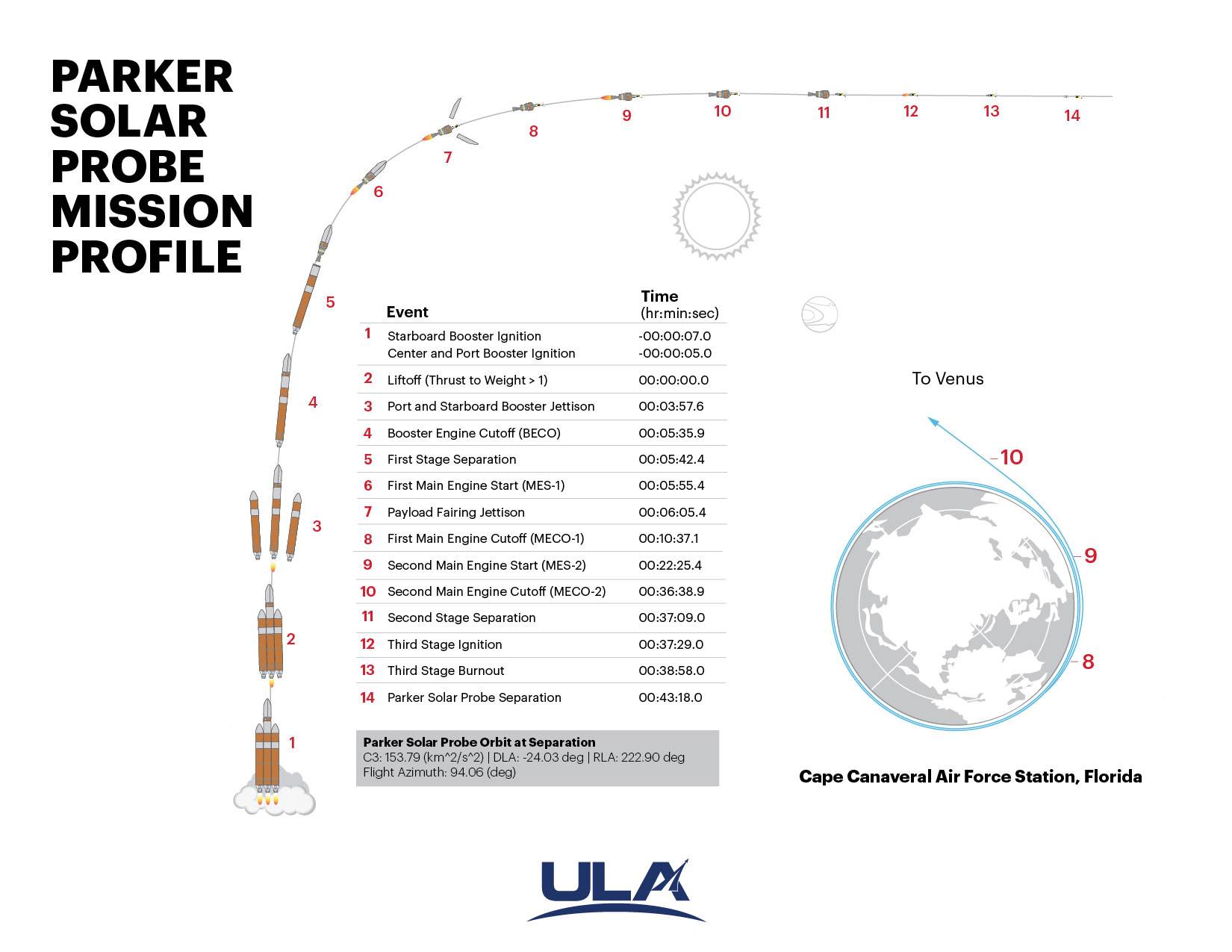 This flight profile shows the approximate timing of the many required steps in the 43 minutes between igniting the rocket and the Parker Solar Probe flying freely.

Launch is by far the riskiest part of a mission, said McComas. “There’s a lot of energy in those rockets. There are thousands of things that have to go right, all in sequence. It’s incredibly complicated.”

When the three booster engines of the Delta IV Heavy ignited, generating 2.1 million pounds of thrust to lift the 238-foot-tall rocket away from the pad, the glow lit up the launch pad from the ground to the clouds above. At T+1:18, one minute and 18 seconds after ignition, the rocket reached Mach 1, the speed of sound. At T+3:56, the port and starboard booster engines shut down; within seconds, they were jettisoned. At T+5:36, the propellant for the initial stage was depleted, causing the last booster engine to shut down. Over the next half hour, the second stage and then a third stage — the first ever used on a Delta IV Heavy rocket — took turns burning through their fuel, accelerating the Parker Solar Probe out of Earth’s gravity and on its way. At T+43:18, the third stage dropped away, freeing the spacecraft to raise its solar panels, point its heat shield toward the sun, and begin its mission.

The probe will rendezvous with Venus in eight weeks, where it will use the planet to dump some of its angular momentum and head in closer to the sun. If all goes according to schedule, the Parker Solar Probe will get to our nearest star six weeks later, and have its first perihelion — the moment of closest approach to the sun — on Nov. 3. At that time, it will be approximately 15 million miles from the sun, which is already closer than any spacecraft in history. The probe will have six more passes by Venus during its seven-year nominal mission, and each time, it will adjust its orbit to bring perihelion closer and closer to the sun.

Every NASA mission has a “nominal” plan, which is the expected duration of the mission, and if there is enough fuel and other resources available, it can transition to one or more “extended missions.”

By the end of its nominal mission, the probe will be within 3.8 million miles of the sun and going 430,000 miles per hour as it flies through the corona. That's fast enough to get from Princeton to downtown Manhattan in half a second.

“If we put the Earth and sun on the end zones of a football field, Parker Solar Probe would tuck and run to the four-yard line, in the red zone and knocking on the door for a touchdown,” said Fox. On that imaginary football field, Venus would be on Earth’s 28-yard line, Mercury would be on the sun’s 30-yard line, and the loops and flares of the sun’s corona would reach out to the 15-yard line. 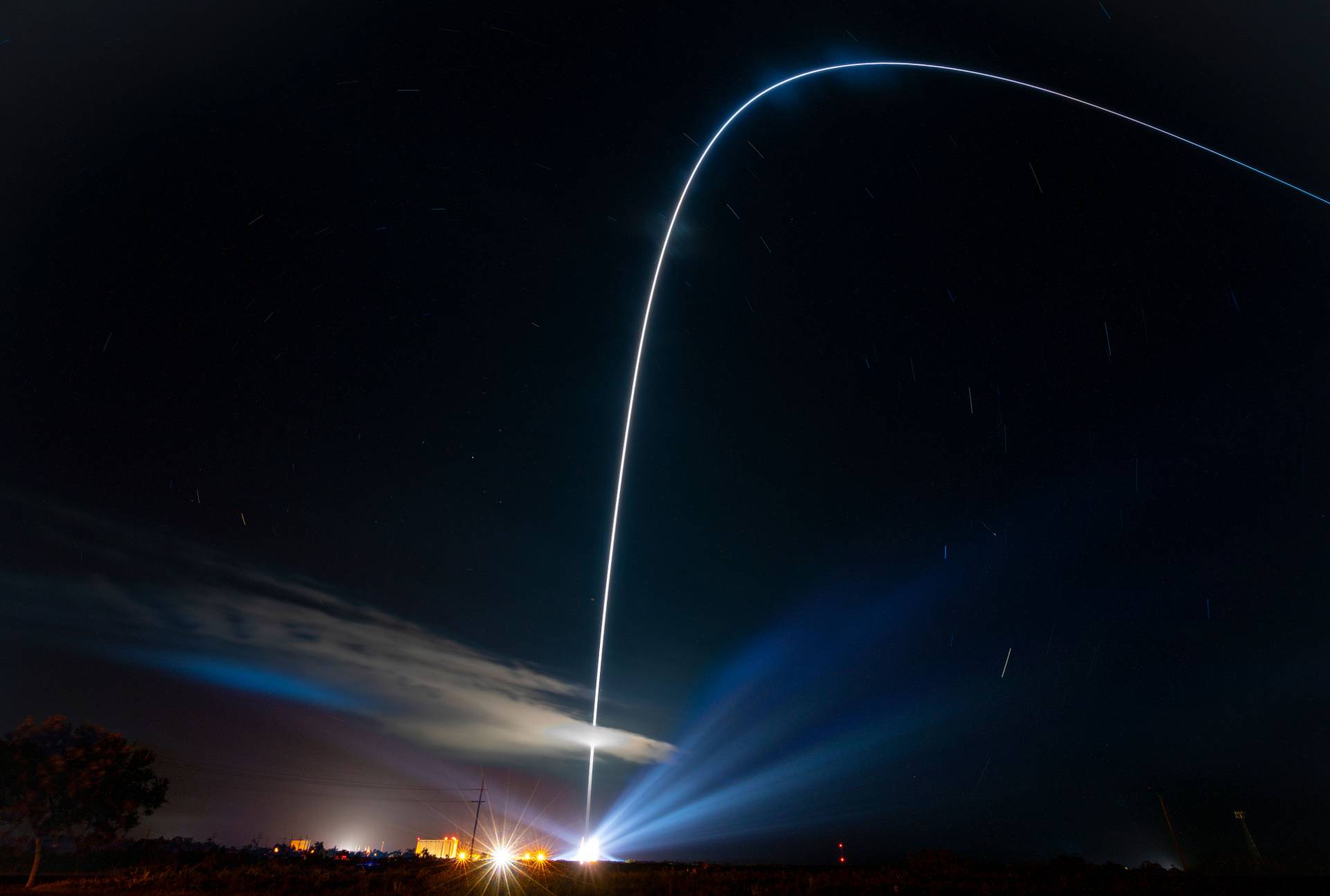 ISʘIS and the other instruments of the Parker Solar Probe will be deep inside the sun’s million-degree corona, protected from heat and solar radiation by a revolutionary 8-foot-wide heat shield that is only 4.5 inches thick. It blocks heat so effectively that even when the sun-facing side is thousands of degrees Fahrenheit, the back side is only about 600 degrees F, and thanks to other cooling systems, the instruments a few feet further away from the shield will be about 85 degrees F, the same temperature they were on the Florida launch pad.

“By flying on Parker Space Probe all the way into the corona, we’ll actually be where the energetic particles are being energized and accelerated,” said McComas. “We’ll be able to directly determine what does that acceleration, and how they move after that, and how they change. After we have that knowledge, when we look at solar energetic particles near Earth, we’ll be able to make the links that we need to, scientifically, to use that information and knowledge for space weather and other purposes.”

There’s an inherent risk in trying to measure solar flares, but researchers calculated that the probe has less than one percent chance of being taken out by a large flare or coronal mass ejection.

“For my instrument — which is measuring particles from solar flares — we want flares, we just don’t want a really big one when the spacecraft is really close to the sun,” said McComas. “We want really big ones that are further away, or smaller ones that are close.”

Shortly before the first launch attempt, McComas said: “I just heard someone say, ‘We’re so close to the end,’ but launch isn’t the end, it’s the beginning! The really exciting part of any mission is the science. It’s been a lot of hard work to get to the point of launching the rocket and spacecraft into space, but it’s once you start getting the data back, and start understanding the science that you’ve gone there to study, that the really exciting part begins!”

In the day between the first and second launch attempts, he gave a public talk at Kennedy Space Center. Afterward, a very young girl asked him what he would do when this mission is done.

“I hope I’ll never be ‘done’ with it,” McComas told her. “I expect to be doing research with my students and my postdocs for the rest of my life on the data from this spacecraft. And you can, too. If you come to school at Princeton, and want to study the sun, we’ll still be using ISʘIS data when you get there.”