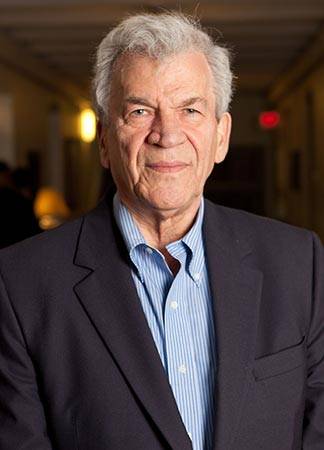 View or share comments on a blog intended to honor Davidson's life and legacy.

Ronald C. Davidson, a pioneering plasma physicist for 50 years and former Princeton University professor of astrophysical sciences who directed the U.S. Department of Energy's Princeton Plasma Physics Laboratory (PPPL) during a crucial period of its history, died May 19 in Cranbury, New Jersey, from complications of pneumonia. He was 74.

"Ron was an anchor for the laboratory both through his science and through his wisdom," said Stewart Prager, director of PPPL and a Princeton professor of astrophysical sciences. "His prodigious contributions not just to PPPL's science but also to plasma physics writ large are clear and widely known. Within the laboratory, he was a mentor and a guide to people young and old. His impact within the laboratory was enormous."

Davidson led PPPL from 1991 to 1996, a challenging time when the lab was preparing the Tokamak Fusion Test Reactor (TFTR) for experiments with deuterium and tritium, recalled Dale Meade, who was deputy director then. The experiment was a 24-hour-a-day, seven-day-a-week enterprise and broke new ground in fusion energy research, Meade said. In November 1994, the TFTR achieved 10.7 million watts of fusion energy, a world record at the time and enough to power up to 3,000 homes. The machine set many world records before it was shut down in 1997 after Davidson stepped down as director.

Davidson kept notes on all the experiments in small green spiral notebooks, Meade said. Every Sunday morning, he would call Meade and department heads for a full report. "He was just amazing in terms of how organized he was and how thorough in terms of analyzing the situation and developing plans to move forward," Meade said. "What made it all even more pleasurable is he was so easy to work for and work with. He was extremely personable."

After serving as director of PPPL, Davidson was deputy director of the U.S. Heavy Ion Fusion Science Virtual National Laboratory, a collaboration with the Lawrence Livermore and Lawrence Berkeley national laboratories. He also worked on the Paul Trap Simulator Experiment at PPPL, which simulated a particle accelerator. Both projects ended in 2012.

Davidson was a prolific researcher, writer and academic. He wrote four graduate-level plasma physics textbooks, more than 500 articles and served as editor of the journal Physics of Plasmas from 1991until last year.

Hong Qin, a physicist at PPPL and executive dean at the University of Science and Technology of China, received handwritten notes from Davidson on a paper the two were working on two days before Davidson died. "Ron had a set of rules and standards to follow but he was not a perfectionist," Qin said. "He was gentle and considerate to his collaborators."

Davidson was a professor in Princeton's Department of Astrophysical Sciences for 20 years until 2011, and at one point served as associate department chair. Adam Sefkow, a physicist at Sandia National Laboratory, one of many graduate students whom Davidson advised, recalled that Davidson was "an excellent mentor. He was very patient — a top-shelf scientist," Sefkow said. "He led by example with his wisdom and judgment, his intelligence and productivity."

Davidson was born in Canada in 1941 and grew up on a family dairy farm near Norwich, Ontario. He was driving a tractor by age 11 and attended elementary school in a one-room schoolhouse. He credited farm life with giving him a strong work ethic. He became interested in plasma physics while studying physics at McMaster University in Hamilton, Ontario. In 1963, he enrolled in the new Program in Plasma Physics at Princeton, then directed by the late Princeton physicist Thomas Stix, and received his Ph.D. in 1966.

During his career, Davidson worked at several prominent institutions. He became PPPL director after spending a decade at the Massachusetts Institute of Technology as a faculty member and founding director of the Plasma Fusion Center. He was able to unify various departments into one central organization at a time when the Alcator C, an early version of today's Alcator C-Mod tokamak, had just been completed.

He did postdoctoral research for two years at the University of California-Berkeley. He went on to become a physics professor at the University of Maryland for a decade, with one year as a visiting researcher at Los Alamos National Laboratory. He spent two years as assistant director for Applied Plasma Physics in the Department of Energy in Washington, D.C., before going to MIT.

Davidson won numerous honors in his lifetime, including the prestigious James Clerk Maxwell Prize in Plasma Physics in 2008, the highest national honor in plasma physics. He was a fellow of the American Physical Society and the American Association for the Advancement of Science.

Davidson served on nearly 30 review committees on fusion and plasma physics at institutions all over the United States and as far away as Japan and the former Soviet Union. He was chair of the American Physical Society's Division of Plasma Physics and Division of Particle Beams and was co-chair of the National Research Council Review Committee on Inertial Fusion in 2010.

In a 2014 interview, Davidson said he was optimistic about fusion energy becoming a reality, noting that "scientific progress in fusion has been enormous. What the field has accomplished with increasingly sophisticated diagnostic tools, major experimental facilities, and advanced numerical simulations is quite stunning," he said.

In reflecting on his long career, Davidson said he had spent a lifetime doing what he loved. "When you talk about physicists working," he said, "you should keep in mind that they are engaged in activities that they enjoy very much."

Davidson is survived by Jean Davidson, his wife of 53 years; his daughter, Cynthia Premru, of Groton, Massachusetts; his son, Ronald Crosby Davidson Jr., of Princeton; and four grandchildren, Will and Maddy Premru, and Crosby and Cayley Davidson.

A memorial service will be held on Thursday, May 26, at 1:30 p.m. at the Princeton United Methodist Church, 7 Vandeventer Ave., Princeton, New Jersey. In lieu of flowers, contributions may be made in Davidson's memory to the "Prof. Ronald Davidson Memorial Scholarship Fund" at Princeton University. Contributions can be made online. Please note the fund's name in the comments box.