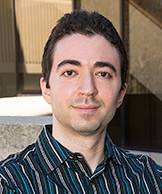 Princeton University graduate student Michael Campanell has won a highly competitive Lawrence Fellowship, resulting in a postdoctoral position at Lawrence Livermore National Laboratory. Campanell was one of just two candidates selected from a field of 163 applicants for the coming academic year for the fellowship, which is open to all technical disciplines.

"I was thrilled to receive this fellowship," Campanell said. "I think it is the best possible fit for me."

Campanell will use the three-year fellowship to investigate a process he discovered at the Princeton Plasma Physics Laboratory (PPPL) that could keep material from the walls of a fusion facility from entering and contaminating the hot, charged plasma gas that fuels fusion reactions. Preventing such contamination will be crucial to the development of magnetic fusion energy.

The Lawrence Fellowship marks a second major honor for Campanell, a graduate student in the Program in Plasma Physics, a PPPL-based division of the Department of Astrophysical Sciences. Campanell last year won a Princeton Environmental Institute Walbridge Fund Graduate Award that provided financial support for research on his dissertation.

Campanell models the influence of electrons that are emitted from the walls of a fusion facility during experiments. His research indicates that a heavy emission of electrons can prevent the positively charged atomic nuclei — or ions — in plasma from accelerating to the walls.

"Acceleration of ions to the wall sputters (or deposits) contaminating wall atoms into the plasma," Campanell said. "If you can stop the ion acceleration, you can mitigate this problem."

Campanell graduated from Temple University with a double major in physics and math, and he credits Kaganovich with guiding him into his current research.

"I probably never would have become a theorist if I had not met Igor," Campanell said. "All my past research going back to college was experimental."

He had planned to base his thesis on research done on the National Spherical Torus Experiment (NSTX) at PPPL. But cancellation of the final run of the NSTX before the facility was upgraded forced Campanell to find a new topic.

"I went to Igor's office for suggestions," Campanell recalled. "He encouraged me to pursue theoretical problems that could be studied with existing particle simulation codes."

Guidance came also from physicist Alexander Khrabrov, a PPPL research associate and Kaganovich collaborator, who taught Campanell how to run simulations on PPPL's high-performance computing cluster. With his newfound ability to develop and test ideas, Campanell studied the effect of electron emissions on plasma-surface interactions for his thesis project. He has published seven papers, including six on which he was first author, during his graduate career.

At Livermore, Campanell will be free to further his research as part of a magnetic-fusion group with access to high-performance computing resources. The position offers "a lot of collaboration with related disciplines," Campanell said. "The only drawback is that I've really liked PPPL and will have to leave."

When he arrives at Livermore in September, Campanell will become the sixth Lawrence Fellow from Princeton, and the third from the Program in Plasma Physics, since 1998.