In any given year, a synthetic chemist may set up several hundred chemical reactions. Many of these reactions will fail, so chemists temper their expectations.

But not Todd Hyster, a Princeton University assistant professor who joined the Department of Chemistry last summer.

"Todd gets really excited about these crazy ideas and he's always confident that it's going to work, even if we think it's a long shot," said Braddock Sandoval, a graduate researcher in Hyster's lab.

Hyster focuses his research on novel reactions at the merger of two areas in which he has extensive experience: classic organic synthesis, which uses small molecules that perform an expansive range of reactions, and biocatalysis, which uses large biological systems such as enzymes to execute only specific reactions, but does so very efficiently. Researchers at the intersection of these fields propose to modify powerful enzymes so that they can be used in more organic reactions.

The majority of the work in this area has come from biology labs that are well acquainted with wrangling complex biological systems, but the field hasn't seen the same level of engagement from chemists, especially in the United States. Essentially, chemists can have difficulty dealing with biological systems because they must learn how to grow cells and work with complicated enzymes. Yet, biologists may not know which of the thousands of possible reactions organic chemists would find most valuable and useful.

Hyster, however, can do both. As one of the few synthetic chemists who also understands biological systems, he is uniquely equipped to identify the reactions that would be most impactful for organic synthesis and make them happen.

"Todd has the ability to connect these enzymes to reaction mechanisms people aren't even thinking about," said David MacMillan, the James S. McDonnell Distinguished University Professor of Chemistry at Princeton. "He's at the vanguard of something new in biocatalysis and I think it's going to be incredibly exciting." 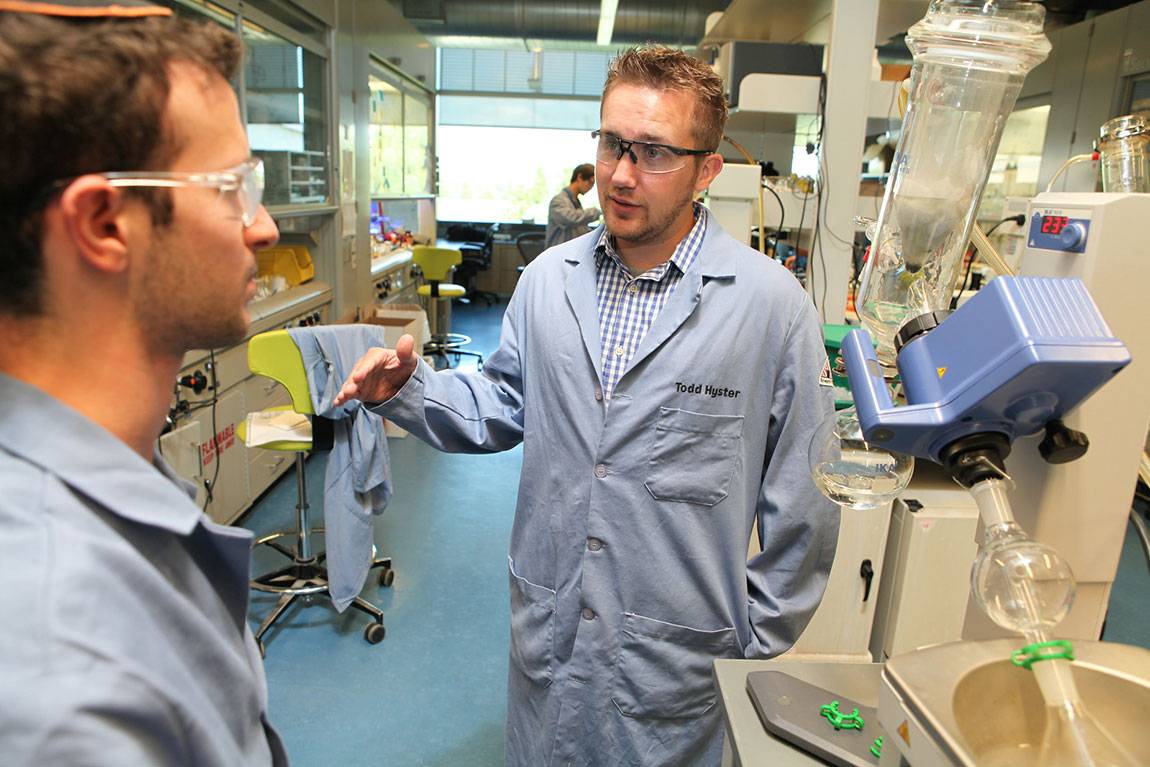 Todd Hyster, a Princeton University assistant professor of chemistry, focuses his research on novel reactions in an area just emerging among American chemists — the merger of classic organic synthesis and biocatalysis. Hyster emulates the relaxed style and flexibility of his mentors by letting students follow their own interests — he is hands-off, but always available to answer questions. Students in his group such as Princeton rising senior Norman Greenberg (left) work long hours in the lab and are eager to establish themselves as researchers. Hyster's confidence and excitement for the work has inspired them to set up reactions that they may not have tried otherwise. (Photo by C. Todd Reichart, Department of Chemistry)

Building up to biocatalysis

As a graduate student under the direction of Tomislav Rovis at Colorado State University, Hyster began research in transition-metal catalysis and, at the time, wanted nothing to do with biology. "I remember saying that I was 'repulsed' by biology," Hyster said with a laugh, "probably one of the most naïve things I've ever said."

It wasn't until his third year of graduate school that his attitude began to shift. He became intrigued by a conference presentation on using mutated proteins to catalyze a specific reaction and even chose the general topic — directed evolution — for his departmental seminar. Then Rovis went on sabbatical in France and presented Hyster with the opportunity to collaborate with a research group working at the interface of biology and organometallic chemistry at the University of Basel in Switzerland, opening a new area of research for the Rovis lab in biocatalysis.

Rovis recalled emailing Hyster late at night from Europe to pitch him the collaboration idea. The usual strategy to improve the reaction is to change the small molecule known as the ligand. Instead, Rovis suggested keeping the ligand constant and changing the reaction environment using a biological system developed by the group in Basel. Hyster replied the next morning that he loved the idea and was game to try it.

"He's someone who had the vision to see the real impact and potential of the idea, and who certainly doesn't pay attention at all to how hard it might be. That's the kind of researcher he is," Rovis said.

In order to make the collaboration work, Hyster spent four months in Basel in Professor of Chemistry Thomas Ward's laboratory learning how to work with proteins, ultimately bringing those skills back to the lab in Colorado.

"His fearlessness is his best quality," Rovis said. "It's what allowed him to embrace this new field that he had no prior experience with and successfully tackle the problem."

The resulting work — published in the journal Science in 2012 — was the first example of a biological environment that could be engineered to promote the formation of new bonds. The reaction took advantage of the extremely strong binding affinity between the large protein streptavidin and the compound biotin, which is referred to as "molecular Velcro." By attaching the ligand-metal complex to biotin, the researchers could lock the metal catalyst into the highly controlled binding pocket of streptavidin.

For his postdoctoral study, Hyster began to shift his focus onto biocatalysis. He joined the laboratory of one of the pioneers of biocatalysis, Frances Arnold, professor of chemical engineering, bioengineering and biochemistry at the California Institute of Technology.

In a 2014 paper published in the Journal of the American Chemical Society during his time in the Arnold lab, Hyster developed variants of the enzyme P450 — one of the most well-known enzymes that break down organic molecules in the liver — to catalyze a particularly unfavorable bond connection. In this type of reaction, known as an amination reaction, the catalyst typically breaks the weakest existing carbon-hydrogen bond to form the new bond. The specially designed P450 mutant, however, adopts a specific shape that favors the bond disconnection at the neighboring carbon, giving the researchers access to a reaction that would be difficult to accomplish by organic catalysis.

Focusing on the puzzles

At Princeton, Hyster is applying what he learned from his time in Rovis' and Arnold's labs in terms of both the science and mentorship. Their relaxed styles and flexibility in letting students follow their own interests were really effective, he said, and he hopes to emulate them.

Hyster is hands-off, but always available to answer questions, Sandoval said. The whole group works long hours in the lab and is eager to establish themselves in the research community. Hyster is very driven, Sandoval said, and his confidence and excitement for the work has inspired them to set up reactions that they may not have tried otherwise.

"If you pursue what you're most passionate about, I think that's when you can do your greatest possible amount of good," Hyster said. Pursuing his own passion is already starting to pay off. Since starting up less than a year ago, the Hyster lab is already preparing to publish research about an enzyme-mediated light-based reaction that hasn't been seen before.

Though pleased about these initial successes, for Hyster, the real satisfaction comes from the research process.

"I just like thinking about these problems. When I wake up, at home, all the time, it's what I enjoy thinking about and that's rewarding enough for me," Hyster said. "It's just an added bonus that these reactions might be valuable."