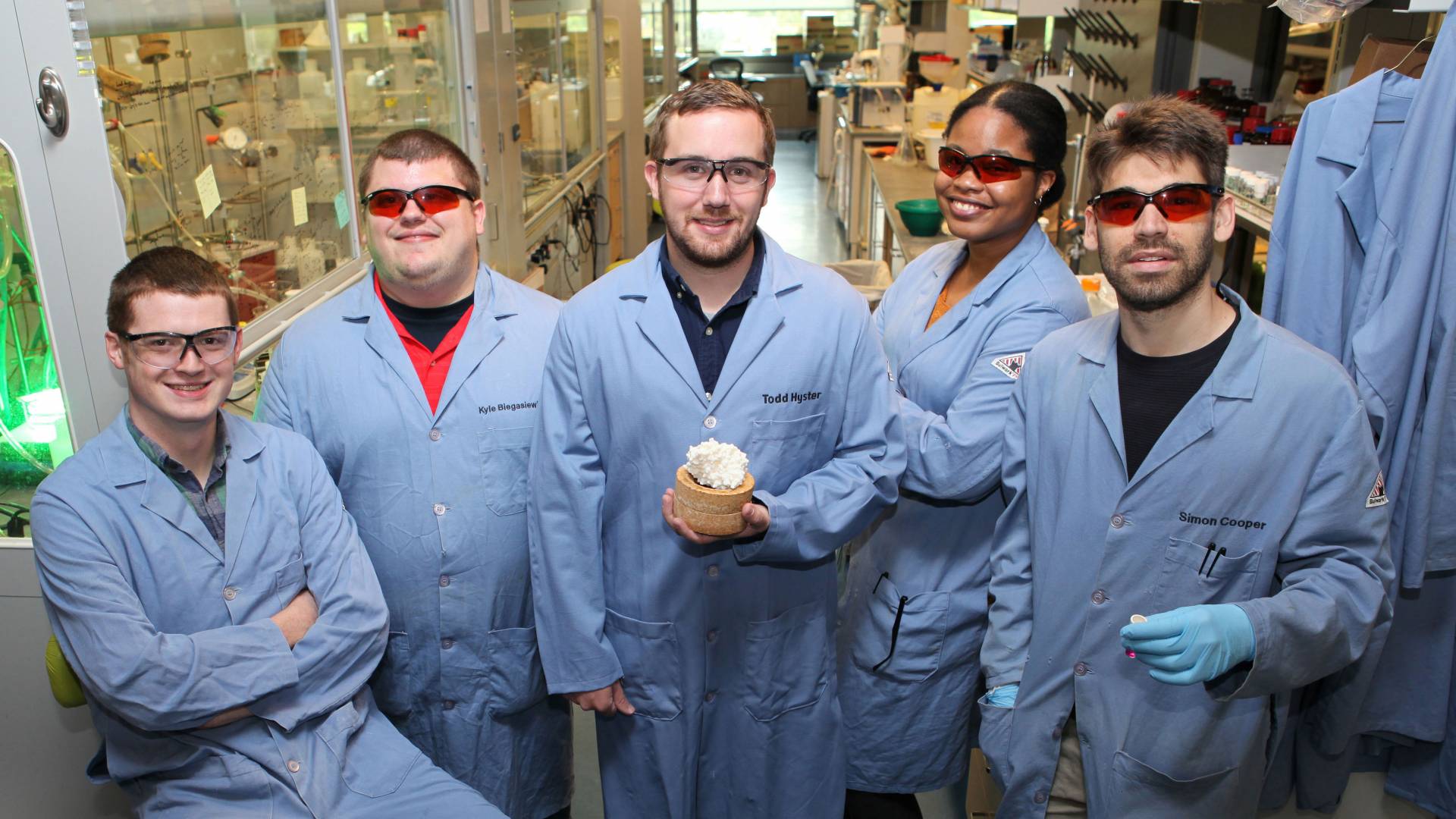 Princeton chemists have found a way to make a naturally occurring enzyme take on a new, artificial role, which has significant implications for modern chemistry, including pharmaceutical production. Their work appears in the journal Nature Chemistry.

“We have found a completely new way to get enzymes to do a non-natural reaction,” said Todd Hyster, an assistant professor of chemistry. “A traditional perspective says that enzymes will only do one thing. This paper shows that this may not be true for all enzymes. More importantly, the strategy described in this paper can potentially be applied to other enzyme families, meaning we will be able to use this approach to invent completely new enzymatic reactions. I think this has the potential to alter the way we build molecules.”

Enzymes are nature’s catalysts, the keys to making critical biochemical reactions happen quickly enough to sustain life. Organic chemists have exploited this for over 100 years, but until now, their use has been limited, as individual enzymes are often only able to catalyze a single reaction.

Now, the researchers in Hyster’s lab have removed an enzyme from its natural setting, added a few new ingredients, and succeeded in making it catalyze a different type of chemical reaction — where it performed surprisingly well.

“Todd is uncovering hidden abilities in biology’s vast repertoire of chemistry, some of which may not be useful to biology but will be very useful to us,” said Frances Arnold, the Linus Pauling Professor of Chemical Engineering, Bioengineering and Biochemistry at the California Institute of Technology, who was not involved in this research.

“He is showing that enzymes are capable of many feats,” said Arnold, who graduated from Princeton in 1979. “All you have to do is ask the right questions.”

The key was simplifying their understanding of how an enzyme catalyzes a reaction, Hyster said.

“I think I am always surprised that our simplified approach to enzyme catalysis actually works,” Hyster said. “As students, we are taught that enzymes are incredibly complicated and specific catalysts. … Every time we find that they are capable of doing something completely new that nature never intended, it is surprising and exciting.”

In their reaction, the researchers added a small amount of a carefully selected photoexcitable dye to the enzyme and flooded it with green light. In doing so, they brought together two usually unrelated branches of chemistry, noted Kyle Biegasiewicz, a postdoctoral research associate in Hyster’s lab and one of two co-first-authors on the paper.

“We have discovered an incredibly exciting marriage of enzymatic catalysis (biocatalysis) and photoredox catalysis,” Biegasiewicz said.

To chemists, getting more of the reaction you want and less of a reaction you don’t is known as “selectivity.” Enzymes are much more “selective” than most small molecule catalysts, and this new technique allows scientists to capitalize on that for their own desired reactions. “Significantly, this new transformation shows high levels of selectivity for a class of reactions that were previously very difficult to control,” Hyster said.

In essence, their breakthrough allows for a new "plug-and-play” approach, using enzymes to turn on new catalytic reactivity, which has many exciting implications, Biegasiewicz said. “While I can't give away any details of ongoing projects in the group, I would inform the synthetic community to stay tuned — the latest stuff is really cool!”

This new discovery is another aspect of the visible light photocatalysis that is transforming modern chemistry, Hyster said.

“The field of catalysis has been revolutionized in the last decade by the development of methods that use light,” he said. “Princeton has really been a driver in this area. Princeton chemistry professors [David] MacMillan, [Abigail] Doyle and [Robert] Knowles all use light to do really incredible things using small molecule catalysts. We have shown that the utility of light is not limited to small molecule catalysts; it can also expand the types of things we can do with enzymes. I think that is pretty neat.”

The idea for this avenue of research came from following “the bread crumbs” in previous research, said Simon Cooper, a graduate student in Hyster’s lab and a co-first-author on the paper. Other scientists had demonstrated that exposure to ultraviolet light caused a significant change in the behavior of an abundant molecule, nicotinamide adenine dinucleotide phosphate (NADPH), which Hyster’s team added to the enzyme along with the photosensitive dye.

“When exposed to UV light, NADPH can switch from transferring two electrons and a proton in a single step to transferring first an electron and then a hydrogen atom (an electron and a proton),” Cooper said. “We thought that if we could take advantage of this new pathway inside an enzyme, valuable new reactions awaited discovery. … The most important aspect of the findings in this paper is controlling the transfer of a hydrogen atom to create only one of two possible mirror-image forms of a molecule. This type of selection between two mirror image forms has traditionally been very difficult to achieve for the transfer of a hydrogen atom, and the methods disclosed here are one solution to this challenge.”

Cooper added: “As we advance further in the 21st century, if a growing world population is to experience the comforts of what we take for granted in the developed world, we will need more cost-effective and sustainable forms of chemical catalysis to deliver many of the products that are attributable to the modern way of life. The methods disclosed in our paper will begin to pave the way, perhaps.”

“Our chemistry may seem to be niche or esoteric, but these examples only serve as proofs-of-concept for what can become powerful methods for making new molecules that can have tangible societal impact: pharmaceuticals, agrochemicals, fragrances and the list goes on,” said Megan Emmanuel, a graduate student in Hyster’s lab and a co-author on the paper. “The implication that our work may, one day, be used to make meaningful contributions to people's lives is exciting.”

The paper, “Catalytic promiscuity enabled by photoredox catalysis in nicotinamide-dependent oxidoreductases” by Kyle Biegasiewicz, Simon Cooper, Megan Emmanuel, David Miller and Todd Hyster, was published in Nature Chemistry on June 11, 2018, with DOI 10.1038/s41557-018-0059-y. The work was supported by Princeton University and a Searle Scholar Award (SSP-2017-1741) to Hyster.