Even if we find it difficult to calculate complicated probabilities on the spot, our brains constantly carry out these sorts of computations without our awareness — and they're remarkably good at it.

Princeton University researchers show in a new study how our brains combine complicated observations from our surroundings into a simple assessment of the situation that aids our behavior and decisions. This boiled-down representation also is flexible enough to account for new information as it becomes available. The researchers found that our brains can accurately track the likelihood of several different explanations for what we see around us. They traced these abilities to a region of the brain located just behind our eyes known as the orbitofrontal cortex. This work was published July 27 in the Journal of Neuroscience.

"When I try to cross the street, I'm not actually analyzing every bit of the scene," said Yael Niv, an associate professor of psychology and the Princeton Neuroscience Institute (PNI) who co-authored the study. "I'm constructing a narrative that I base my decision on, such as, 'That car is slowing down because of the red light.'" 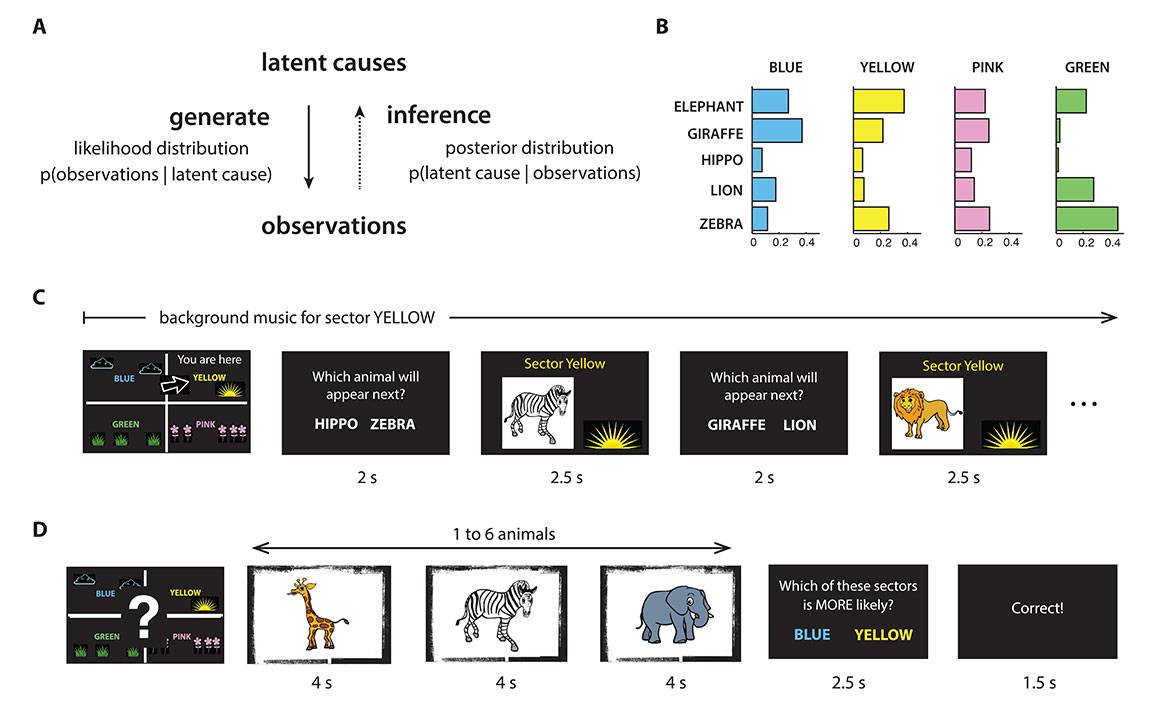 Princeton University researchers found that our brains combine complicated observations from our surroundings into a simple assessment of the situation that aids our behavior, is flexible enough to account for new information, and can accurately track the likelihood of several different explanations for what we see (A). They studied the brain while participants played a game (B) that required them to classify five different animals into the correct zones — blue, yellow, green and pink — in a safari park. After becoming acquainted with the animal populations in the four zones of the virtual safari park (C), participants saw a series of animal pictures and had to correctly determine in which of two zones the animals were most likely to belong (D), even when neither of the two zones was the most likely choice. Functional magnetic resonance imaging indicated that this is because the brain region known as the orbitofrontal cortex correctly tracked the probabilities that the various animals belonged to different zones. (Safari map by Stephanie Chan. Animals courtesy of Science With Me)

First author Stephanie Chan, who earned her doctorate in neuroscience from Princeton in 2016, hypothesized that the brain keeps track of these possibilities in a way that is simpler than a comprehensive description of the situation, but more complex than a single explanation. She investigated the idea that the brain calculates a distribution of probabilities for each of many distinct possibilities.

To find out where and how the brain tracks these probabilities, the team needed to coax their study participants to compare probabilities without thinking about actual numbers. If participants tried explicitly to do the math, they would fail, said co-author Kenneth Norman, professor of psychology and PNI. "Our brains are horrible at arithmetic. Our implicit computations are so much better than our explicit computations," Norman said.

To study these implicit computations, the team tracked the brain activity of participants as they explored a virtual "safari park" split into four zones — blue, green, pink and yellow. Each zone contained a different assortment of elephants, giraffes, hippos, lions and zebras. The task forced the brain to use previous observations of these animals to decide in which colored zones various arrangements of the animals were likely to be found.

First, participants saw a series of pictures of the animals in each zone — a collection of 30 to 40 animals shown one after the other. After getting a sense of how the animals were distributed across the different zones, the participants viewed a new series of animal pictures that showed between one and six animals. They were asked which of two zones the animals were more likely to have come from. For example, a participant might be shown two lions and a zebra, and then be asked whether they were more likely in the green zone or the blue. In many cases, these questions did not give the most likely zone as an option. By forcing participants to choose between two zones that were not the most likely overall, the researchers could measure how well participants tracked the relative likelihoods of all four zones.

Because every animal appeared at least occasionally in every zone, the participants could not unambiguously point to a single zone, or even eliminate one zone from the options. For instance, a group of two zebras and a lion might point to the green zone, where both animals are most common, but those three animals could conceivably appear in any zone — and adding a hippo to the collection might suddenly make the green zone most likely.

Participants were consistently able to correctly choose the more likely of the two zones. What's more, their accuracy didn't suffer when choosing between two zones that were not the most likely overall, indicating that they could track the relative likelihood of all four zones.

To find out where the brain performs this feat, the researchers had participants perform the task while undergoing functional magnetic resonance imaging (fMRI), which reveals the regions of the brain that are most active at a given time. The researchers expected the brain to track the situation as a series of four probabilities — one for each zone — so they looked for brain regions in which the pattern of activity changed together with the four probabilities.

The best match for this search was the orbitofrontal cortex, a brain region implicated in carrying out complex plans, learning how a setting or situation has changed since last seen, and high-order thinking. The findings refine the previous hypotheses that this region of the brain provides intellectual flexibility, Niv said. "It's not just the flexibility area, it's your model of how the situation works," she said.

Knowing when to change that model — whether you're moving from zone to zone in a virtual safari, or place to place in the habitats of our evolutionary predecessors — would have given our ancestors an advantage over animals that behave by the same rules in all situations. "There's an adaptive advantage to having a brain that can say that the world works differently in different situations, but then you need to be able to figure out which area is relevant right now," Norman said. "That's what the orbitofrontal cortex seems to do."

The article, "A Probability Distribution Over Latent Causes in the Orbitofrontal Cortex," was published July 27 in The Journal of Neuroscience. This work was supported by the National Science Foundation/National Institutes of Health (NIH) Collaborative Research in Computational Neuroscience grant (NSF IIS-1009542); the NIH (2T32MH065214): and the U.S. Army Research Office (W911NF1410101).