Luis Carchi is an Ecuadorian-American from Columbia Heights, Minnesota. A first-generation college student, he says his path to Princeton was not typical. After his junior year of high school, Carchi was selected among students nationwide to participate in Leadership Enterprise for a Diverse America (LEDA).

The independent nonprofit develops the leadership potential of exceptional public high school students from low-income backgrounds. LEDA helps students gain access to and succeed at selective colleges and universities. Each summer LEDA's Aspects of Leadership Summer Institute for high school students is held on Princeton's campus. Princeton's longtime support of LEDA is one of many University efforts to increase the socioeconomic diversity of college students on campus and across the country.

Carchi ended up applying to and enrolling at Princeton, where he now is a sophomore interested in pursuing a degree in economics with certificates in entrepreneurship and Latin American studies. Last month, he was one of nine LEDA scholars who traveled to Washington, D.C., for the White House Summit on Advancing Postsecondary Diversity and Inclusion. U.S. Secretary of Education John B. King Jr. led senior education officials in government and academia in a discussion on how to expand college opportunity for all students, examining the challenges and steps that institutions can take in achieving that goal. Some LEDA scholars were featured on a panel presentation and all participated in breakout discussions.

Below, Carchi reflects on his day at the White House and his path from high school to LEDA's program and to Princeton. 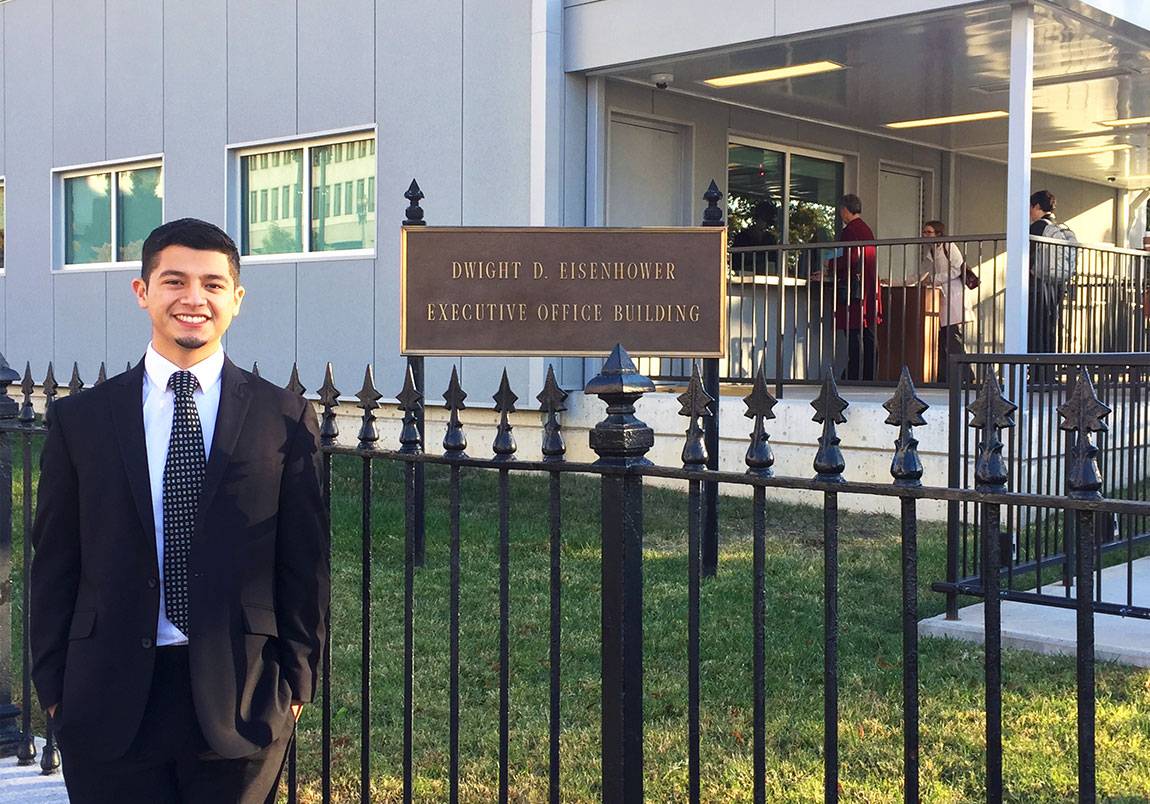 Princeton sophomore Luis Carchi stands in front of the Eisenhower Executive Office Building in Washington, D.C., before attending the White House Summit on Advancing Postsecondary Diversity and Inclusion. Carchi was among college students, and senior education officials in government and academia, who discussed how to expand college opportunity for all students. Carchi is a first-generation college student from Columbia Heights, Minnesota. (Photo courtesy of Leadership Enterprise for a Diverse America)

We wait in a line to go through the first security clearance. Soon after, metal detectors and police dogs are added to the process. At the end of this, I am handed a green identification badge. This small badge, about 3-by-2 inches, may have been an insignificant detail in comparison to the events that followed, however, it is this badge that separates me from everyone else having a regular Friday. I have been granted permission to enter, not only the presidential residence, but even greater than a building that flies our nation's flag — the heart of America. Out of all people, why have I been invited to enter such an iconic symbol of America?

This event may have been even more difficult to foresee for my father, who at around my age had already left his home in Ecuador, not speaking a hint of English, in chase of what had been coined as the "American Dream." Who would have thought that his son would be entering the White House several years later?

My path to Princeton, which played a part in my invitation to the White House, was far from the "typical" student at Princeton. Neither of my parents completed any schooling past the fifth grade and the last time a student from my high school attended an Ivy League institution was never. However, my mother, who single-handedly raised my sister and me after the passing of my father, instilled a unique drive in me. My mother made me aware of the struggles she and my father had gone through in order for me to receive what was out of reach for them: an education. She made me realize that an education would be pivotal for my future. I understood what my mother meant and shot for the stars — the Ivy League. However, I did not know how I would get there.

Leadership Enterprise for a Diverse America (LEDA) helped connect my hard work with the opportunity to attend an institution like Princeton. LEDA seeks to identify high-achieving socio-economically disadvantaged high school students and help them attend our nation's most selective institutions. During the summer of my junior year in high school, I was selected to attend LEDA's Aspects of Leadership Summer Institute, where I decoded the college application process and received ACT-prep courses and college guidance. Fast-forward about two years later, and I was nominated by LEDA to attend the White House Summit on Advancing Postsecondary Diversity and Inclusion with several other LEDA scholars.

The event at the White Houses was a mix of students, higher education leaders, researchers, officials from the Department of Education and many other stakeholders in the education field. During this day-long event, I sat through panels where scholars and other education leaders discussed issues surrounding inclusion and diversity in higher education, such as the Supreme Court's Fisher II decision, as well as faculty diversity in higher education. It was amazing to get an insider's perspective on the research and listen to the lawmakers that construct our nation's educational policies. This close proximity helped me better understand the nuances and difficulties that these leaders faced as they tried to push America's educational system forward. 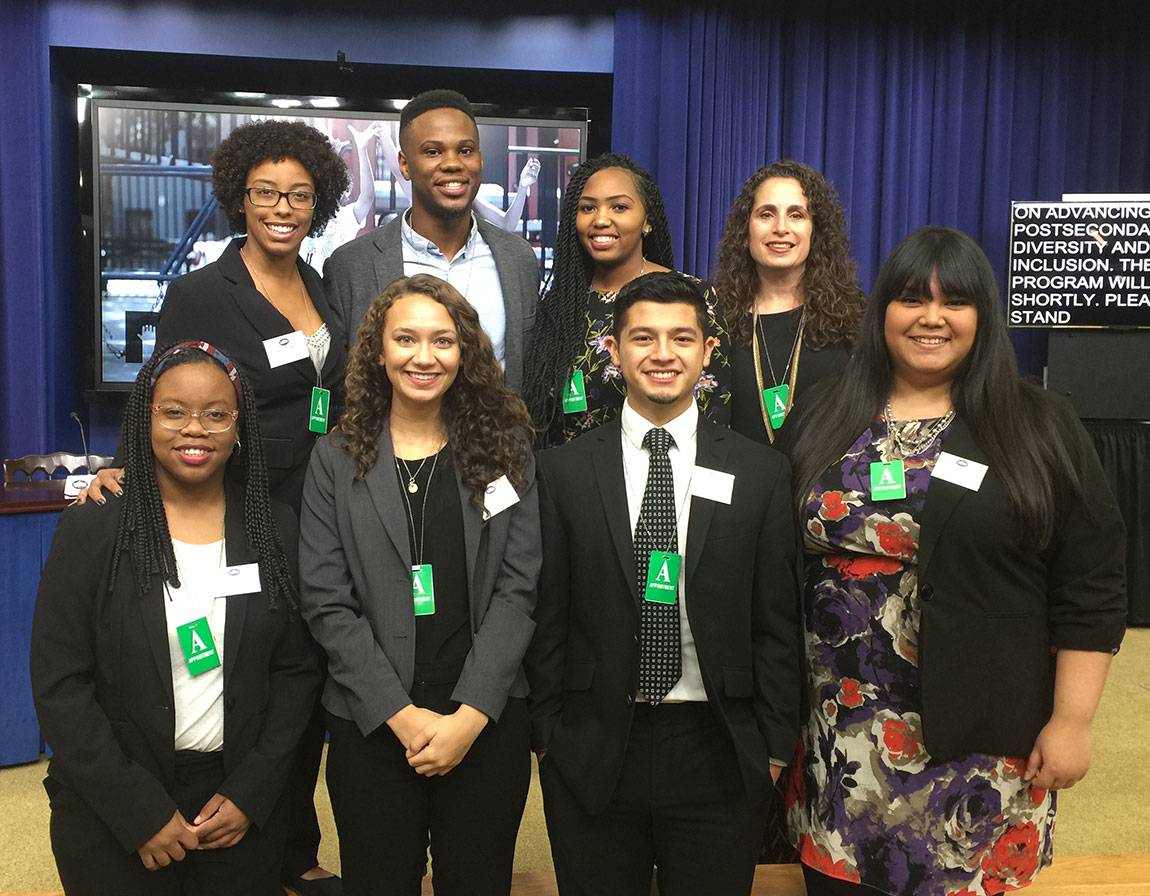 After the panels, we broke into small sections to discuss more specific topics, which allowed the student-participants a special opportunity to voice their opinions. My breakout session was titled "Beyond Fisher: Mobilizing Change and Transformative Uses of Data." With about three other students, we sat in a room filled with researchers, lawyers and many other educational leaders. Intimidating at first, I sat back and listened to the discussion surrounding the multiple stages of research, from gathering data to constructing policy from its interpretations.

As I sat there, I realized that I was not there only for myself, but rather, I was there as a representative of the thousands of students who were like me. The moment was bigger than me. I was invited to bring the student perspective to the table, along with the rest of the students, in order to create change that would benefit thousands of others. Together we provided insights on how to better include students in the different stages of research in order to ensure problems being researched and solutions being offered correctly address the students' needs. What stuck with me during the breakout session was that our insights were being listened to carefully and taken seriously. Our opinions were more than just words to be written on paper. The other participants in the room were highly invested in the conversation, as well as invested in advancing diversity and inclusion in higher education on a large scale. The breakout session was progress in action.

I am very grateful to have had the opportunity to attend the White House convening. Through this experience, I was able to better understand key issues in higher education, and also offer insights from a student's perspective. Attending this White House event was an unforgettable experience, especially as I reflect on my own journey to Princeton and my experience thus far. I am hopeful that such events will add to the national dialogue on bettering higher education for the thousands of students across the nation. Change does not happen overnight, it may even be stalled, but we will endlessly pursue it.