At a vegetable farm in West Africa, where the planting is done by hand, questions about weather boil down to the most urgent question of all:  Will the rains be good or bad?

Princeton professor Eric Wood, a hydrologist who usually works with global data and computer models, visited the small farm an hour out of Niamey, Niger, in 2013. There, he spoke with the very people who would benefit from a new drought and flood risk monitoring system that he had created. Farmers in Niamey rely on their agricultural agents, and by extension Wood's program, to tell them when the rains will come and how plentiful they will be. 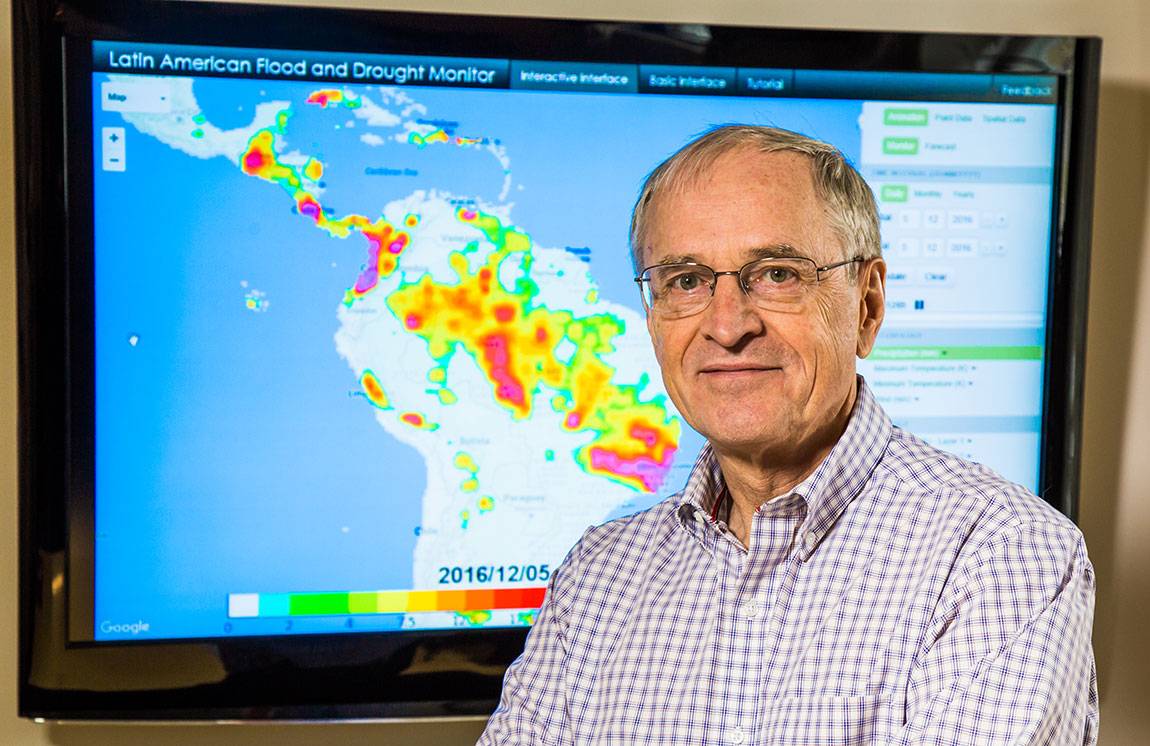 Princeton professor Eric Wood and a team of Princeton engineers have deployed an advanced drought and flood risk monitoring program for environmentally vulnerable regions like Niger and other areas in Africa and in Latin America. The program assimilates weather data that are plentiful but hard to analyze for those on the ground. (Photo by David Kelly Crow for the Office of Engineering Communications)

"There's a strong seasonal cycle of rainfall, coming from the south," said Wood, the Susan Dod Brown Professor of Civil and Environmental Engineering. "They want to know, will they have good rains or bad rains, when will the rainy season start? They want to make sure the rains are there before they plant. If they plant too early, the seeds will die before they get established. These are people who live on a couple of dollars a day, maybe less. It's very difficult for them to get new seed to plant.

"You travel to these places and you realize just how great their needs are for information to help them cope with water management problems. And you walk away thinking that maybe, well … you're doing some good. It does give great satisfaction."

Wood and his team of Princeton engineers have deployed their advanced drought and flood risk monitoring program for environmentally vulnerable regions like Niger and other areas in Africa and in Latin America. The program assimilates weather data that are plentiful but hard to analyze for those on the ground.

Developed at the request of UNESCO, the program enables users to survey a wealth of meteorological and hydrological data, including wind speed, temperature, precipitation, stream runoff and other metrics. The advent of technology gives considerable depth to such data. But synthesizing it into an easy-to-use format has been a challenge for scientists and stakeholders alike.

Enter Wood, who also serves as director of graduate studies for Princeton's Department of Civil and Environmental Engineering, and a cadre of graduate students. Their African Flood and Drought Monitor (AFDM) and Latin American Flood and Drought Monitor (LAFDM) provide real-time climate modeling for multiple levels of users, from policymakers to community farmers. The Princeton team conducts instructional workshops in the various countries, the most recent in Brazil last July. One of the first of these workshops was held in 2013 during the visit to Niger.

Perhaps most striking, the team created the programs with little direct funding. They leveraged earlier research supported from the National Oceanic and Atmospheric Administration (NOAA) to create AFDM and LAFDM. Wood considers his team's cost-effective contributions a reflection of the kind of work engineers should be doing throughout the world.

"Look, there's a need," said Wood. "I think it's important for people like myself, who have been funded over our careers by agencies like NASA and NOAA, to think about how we can serve communities that don't have access to what we've had.

"This is a way for the support we've received to do good for underserved societies," he added. "These are groups and societies with limited capacity and great, urgent need. Why shouldn't we say, okay, I'm going to give something back?" He referenced the program's efficacy in northern Chile, for instance, where it picked up the probability of the devastating March 2015 floods in a region that hadn't seen rain in years.

Wood's long-time collaborator at Princeton, Justin Sheffield, now a professor at the University of Southampton, England, added: "Scientists have a responsibility to ensure that their research not only has impact, but can be translated into benefits for populations in need. These drought forecasts have the potential to help decision-makers reduce impacts."

While the data undergirding the programs has long been available, several factors made it difficult to access. Unreliable computer networks, a lack of technical sophistication, low institutional priority and the ability to unscramble and translate all the material into one meaningful forecasting tool were among them, said Princeton team members.

AFDM and LAFDM scale down and merge meteorological and hydrological data to be consistent in time, explained Wood. The data are then applied to land-surface impact models that evaluate the risk for floods, droughts, stream runoff and crop impact, as well as spotlight historical and seasonal trends. The data do not exist in such a user-friendly format anywhere else. In effect, Wood's system comprises a one-stop web interface for those who want comprehensive weather information at or near real time.

"These programs came from us recognizing that all the data out there were really hard to put together, even for professionals," said Princeton graduate student Colby Fisher. "There's always been a gap between research and what's actually done on the ground." Fisher characterized the programs as the "most public" of Wood's work in hydrological research and modeling.

The data are culled from three sources, said Fisher. The Princeton Global Forcing Data Set includes historical weather statistics from 1948 to 2010; these are used to compare long-term patterns with current conditions. Data downloaded from NASA satellites provide the bulk of the system's offerings. This data is then buttressed with forecasts from NOAA's seven-day global weather forecasting model and seasonal climate forecasting model. There are three data distribution centers in Africa: Niger, Kenya and Zimbabwe. There are host programs in Santiago, Chile, and Foz do Iguaçu, Brazil. The Princeton-based website, stream.princeton.edu, also provides access.

"This [system] has confirmed the huge interest of the region for a monitoring and early warning tool for floods and droughts," said Koen Verbist, program specialist in hydrological systems and water with UNESCO's operation in Santiago. "Given that these instances are steadily increasing over the last few decades, the LAFDM is filling a gap to provide continuous updates on these water-related hazards."

The first system was rolled out in 2012 with assistance from Sheffield and Princeton postdoctoral research associate Nate Chaney. The monitors have since been completely upgraded with new software developed primarily by Chaney, along with Fisher and Jonathan Herman, who worked with the Princeton team while a graduate student at Cornell University. The monitors are offered in six languages, and include scripts to download material on a daily basis — all with minimal overhead.

While AFDM and LAFDM provide data that lay out the combined impact of meteorological and hydrological phenomena, the models have been crafted to steer clear of interpretation. Wood insisted that advice does not fall under the system's purview. They provide data and context. They do not tell people what to do with it.

Wood's biggest concern right now is sustaining his efforts. Adequate funding, perhaps from private foundations, is necessary to maintain the data distribution centers, and possibly engender additional sites or expand the size of the monitored areas.

"As the world gets more populated and we have climate change," Wood said, "there will be more stress on the intersection of water, food and energy. People need these tools."