A common roundworm widely studied for its developmental biology and neuroscience, also might be one of the most surprising examples of the eat-local movement. Princeton University researchers have found that the organisms have a sure-fire method of ensuring a steady supply of a bacteria they eat — they grow their own.

The researchers reported Feb. 9 in the journal Proceedings of the National Academy of Sciences that the worm, Caenorhabditis elegans, carries a food source, the bacteria Escherichia coli, along with it as it tunnels through the rotting fruit and soil in which the worms and bacteria both naturally dwell. The bacteria adhere to the worm's sticky skin when the roundworm crawls through a bacterial patch.

Studying this activity in petri dishes, however, the researchers discovered that the worms do more than simply take their meals to go. As the worms pushed through a gelatinous medium they dropped bacteria along the way to create thriving new colonies of E. coli that the worms would later return to "harvest" and eat. 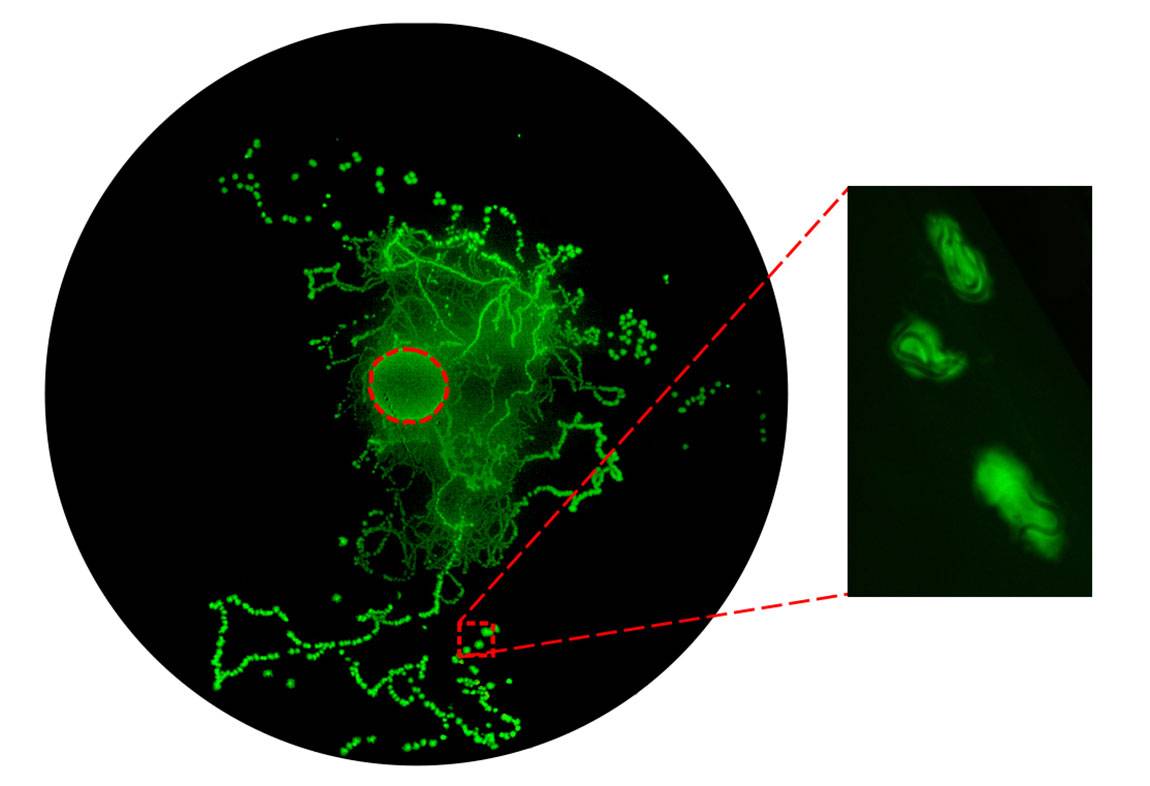 Princeton University researchers have found that the roundworms Caenorhabditis elegans have a sure-fire method of ensuring a steady supply of a bacteria they eat — they grow their own. The worms move through patches of the bacteria Escherichia coli (red circle), which adhere to the worms' sticky skin. As the worms move, they drop bacteria along the way to create thriving new bacterial colonies that the worms later return to "harvest" and eat (inset). (Image courtesy of Clifford Brangwynne, Department of Chemical and Biological Engineering)

"It can really be best described as primitive farming," said co-author Sravanti Uppaluri, who serendipitously noticed the worms' agrarian tendencies as a postdoctoral researcher at Princeton and is now at Azim Premji University in Bangalore, India.

In a series of experiments, the researchers explored the ins and outs of the interspecies relationship between the worms and the bacteria. They found that new bacterial colonies formed mostly because of E. coli being cast off the worms' sticky, approximately 0.04-inch-long bodies. But some bacteria also passed through the worms' gut alive and undigested, and were thus able to establish additional outposts.

To examine how this dynamic affected organism populations, the researchers compared normal roundworms with mutant worms whose skin is harder for the bacteria to latch onto. With the mutants, the stationary E. coli failed to spread and proliferate like they did in the presence of normal roundworms. With fewer bacterial crops to harvest, the population of mutant worms was smaller than that of the normal worms.

Experiments also included mixed populations of normal and mutant roundworms in the same dish. The mutants were observed to be freeloaders that exploited the bacterial chow provided by the normal-skinned farmers. The observation led researchers to speculate that in the wild, farming roundworms might also pay a survival cost. This is because harmful bacteria can likewise attach to the worms and ultimately kill them, highlighting a potential evolutionary tradeoff of farming versus traits for hunting-and-gathering.

The C. elegans worms and the E. coli bacteria are darlings of biology labs, ranking among the most-studied organisms in science. Their relatively simple systems function surprisingly like those of more complex organisms but are easier to study. Given the deep understanding of the genetics, physiology and behaviors of C. elegans and E. coli, researchers hope to use the newfound interplay between the creatures to gain critical insights into a variety of natural relationships.

"We anticipate that the ideas presented in our work will pave the way for linking the ecological and evolutionary dynamics taking place at the population level with the genetics and neuro-behavioral factors taking place at the level of the individual organism," said Shashi Thutupalli, who worked on the project as a postdoctoral researcher at Princeton and is now at the Tata Institute for Fundamental Research in Bangalore.

Research topics beyond worms and their microbial prey could benefit as well. For example, the bacterial "sowing" by roundworms bears a striking resemblance to other dissemination processes in nature, such as seed dispersal and the spread of epidemics. Again, the ease of experimentally working with C. elegans and E. coli should give scientists a handy platform for testing out theories in these diverse fields.

"The experimental tractability of this worm-and-germ system will enable us to ask pointed questions," Uppaluri said. "C. elegans has already been responsible for so many discoveries, especially in developmental biology and even neuroscience, and our study suggests this organism is going to open up many more avenues of research."

"The really interesting observation, of how worms can carry bacteria around, started the whole project," said Clifford Brangwynne, an assistant professor of chemical and biological engineering, who is one of the paper's authors. "It's something very simple that countless researchers have probably seen but never really thought about."

Jeff Gore, a biophysicist at the Massachusetts Institute of Technology who was not involved with the study, likewise noted the richness of the worm-bacteria interactions. "This study highlights that even the simplest of organisms can have behaviors that interact in fascinating ways with ecology," Gore said. The study also "elegantly demonstrates that the beginning of 'farming' can be quite simple," he said.

The paper, "Farming and public goods production in Caenorhabditis elegans populations," was published in-advance-of-print Feb. 9 by the Proceedings of the National Academy of Sciences. The work was supported in part by the Human Frontier Science Program, the National Institutes of Health, the Searle Scholars Program and the Simons Foundation.