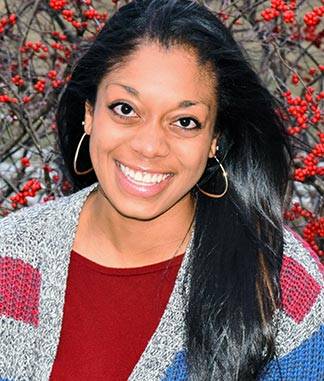 Princeton senior Monique Claiborne has been awarded a Luce Scholarship that will allow her to spend the next year in Asia. She hopes to pursue an internship in arts and entertainment in Seoul, South Korea, such as at a record label, film production studio or arts magazine.

"The Luce Scholarship is the perfect fit for me at this time in my life, because a year of personalized professional placement and cultural immersion will grow me as a professional, an artist, a scholar and most importantly, as a person," Claiborne said.

Administered by the Henry Luce Foundation since 1974, the scholarships aim to foster understanding and cooperation between the next generation of American leaders and their Asian counterparts. Claiborne was among 18 students (from 161 nominees) selected for the 2017-18 class of scholars.

A philosophy major from Opelousas, Louisiana, Claiborne also is earning a certificate in American studies.

One of Claiborne's passions is dance, which she has pursued throughout her life. At Princeton, she became fascinated by hip-hop and joined diSiac Dance Company her sophomore year. Through that experience she said she "became more aware of the prevalence of hip-hop music, dance and aesthetics in parts of Asia," which prompted her to apply for the Luce Scholarship.

As a Luce Scholar, Claiborne said she "anticipates growing as an artist by immersing myself in the local dance community."

Claiborne also will continue to build on her academic work. "Philosophy has provided an avenue for me to engage with art and aesthetics more critically," she said.

She added: "I am especially interested in everyday aesthetics, including popular culture, architectural design and technology focused on user experience.

"My senior thesis offers an account of the aesthetic experience that occurs when we use interactive technology, and I emphasize the importance of design in fashioning culture. I hope to eventually earn my Ph.D. in philosophy, and I realize that my ability to contribute to these and other philosophical questions is limited without a perspective that extends beyond the Western tradition. I hope that a year in Asia will bridge that gap."

Sarah McGrath, associate professor of philosophy, said Claiborne is an "extremely talented young philosopher." McGrath said that in the junior seminar she taught on normative ethics last year, Claiborne "exhibited a high level of thoughtfulness and sensitivity to other students' ideas."

In the summer of 2015, Claiborne took the seminar "Knowledge, Mathematics, Politics and Art in Plato's Republic" at Humboldt University in Berlin, led by Princeton philosophy professor Benjamin Morison.

Along with diSiac Dance Company, Claiborne's main activities while at Princeton include: peer academic adviser in Mathey College, fellow with the Writing Center, undergraduate representative with the Campus Iconography Committee, campus guide with Orange Key Tours, and head fellow with the Scholars Institute Fellows Program to mentor undergraduates from first-generation and low-income backgrounds to thrive at Princeton. She also participates in Princeton Faith and Action.