The pilot programs in astrophysical sciences, physics and politics offer a select number of recent bachelor's degree graduates the opportunity to spend between one and two years on campus taking courses and conducting research. The goals of the non-degree programs are to help the scholars gain admission to top-tier doctoral programs and to help diversify their fields on campus and beyond. 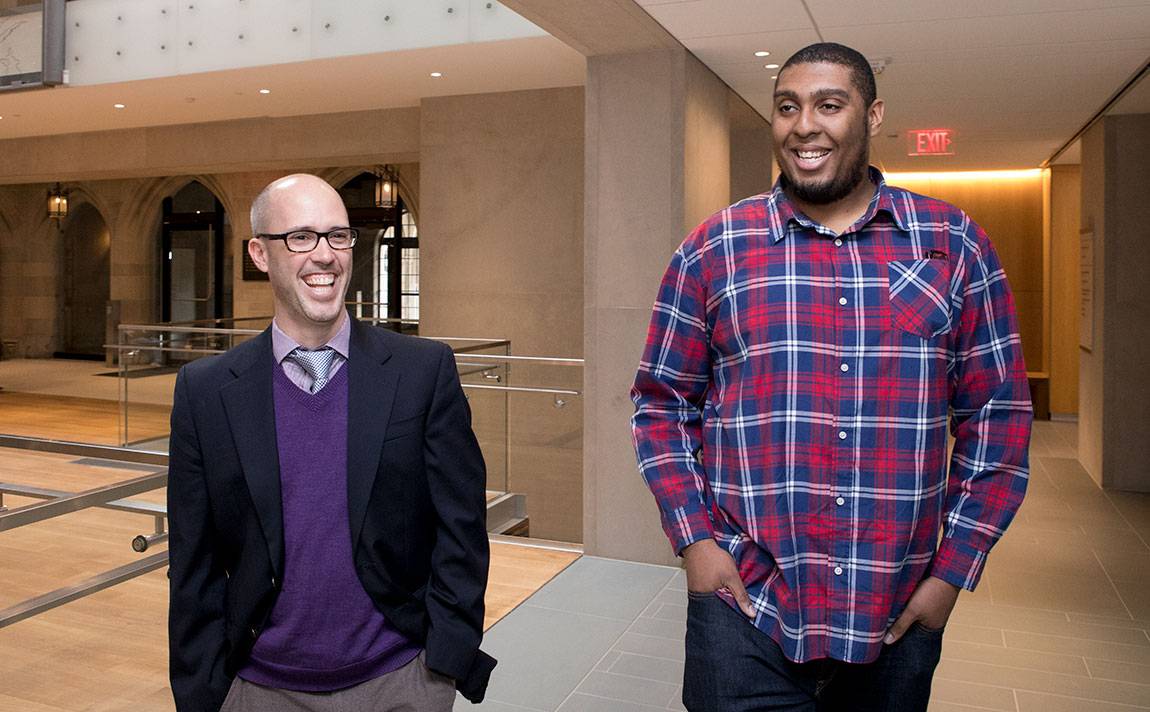 Kristopher Ramsay (left), associate professor of politics who leads the politics bridge program at Princeton, works in conjunction with faculty mentors to help participants such as Brandon Johnson (right) get the most out of the program. The politics bridge program is one of three on campus that offer a select number of recent bachelor's degree graduates the opportunity to spend between one and two years on campus taking courses and conducting research. (Photo by Denise Applewhite, Office of Communications)

"We know there are many individuals who have the talent and interest to pursue a doctorate, but may not have had access to the coursework or research experiences that would make them competitive for a top-tier program in their field," said Assistant Provost Aly Kassam-Remtulla, who helps oversee the programs. "Being able to provide that opportunity at Princeton is really wonderful, and it's a chance to test whether this model works for us and for these emerging scholars."

These bridge programs are part of the University's response to the 2013 Report of the Trustee Ad Hoc Committee on Diversity, which recommended a comprehensive strategy to increase the diversity and inclusivity of the Princeton faculty, graduate student, postdoctoral and staff populations. These programs are funded jointly by academic departments and the University administration.

Brandon Johnson came to the Emerging Scholars in Political Science program in January 2016 after finishing his bachelor's degree in political science from Monmouth University in West Long Branch, New Jersey. At Princeton, he has taken courses in politics and calculus and worked on research on the changing politics of the South led by Nolan McCarty, the Susan Dod Brown Professor of Politics and Public Affairs and chair of the Department of Politics.

Johnson, whose research interests include presidential signing statements and race and ethnicity in politics, has been accepted into the Ph.D. program in political science at the University of California-Los Angeles. He is one of four current participants in the politics bridge program at Princeton.

"Monmouth University is a small school, so it's great to be part of an institution that has a lot of influence and impact on research," Johnson said.

"We want to select candidates who are already very good and push them into the top tier of Ph.D. programs," Ramsay said. "Some may come here. Some may not. But either way, they are potential hires for us in the future and, hopefully, other universities might follow our lead down this road."

The first participant in the Bridge Program in Physics is now a doctoral candidate at the University of Michigan and continues to be a research collaborator, said Lyman Page, the James S. McDonnell Distinguished University Professor in Physics and chair of the Department of Physics.

Physics participants take courses, work with a research group, receive support in preparing for the GRE and applying for graduate school, and take the same qualifying exams as first-year Ph.D. students. At any time, there are up to two participants in the physics program.

"People have a lot of potential and if they're passionate about doing physics, we want to provide a path," Page said. "It's rewarding to watch them grow over time."

The Post-Baccalaureate Program in Astrophysics involves two scholars per year. Participants take courses, carry out research with a faculty adviser or in a research group, and receive mentoring and support with career planning and graduate school applications.

Jesús Hinojosa earned his bachelor's degree in physics from the University of Texas-Brownsville before completing Princeton's bridge program in astrophysical sciences in May 2016. Hinojosa, who is now a graduate student in applied physics at the University of Michigan, said the Princeton program offered him "the opportunity to participate in world-class research with outstanding faculty members in both astronomy and plasma physics."

Though each program is structured slightly differently, all participants receive a salary or stipend and financial support for their research. In addition to their membership in an academic department, participants may access a wide variety of resources at the Graduate School.

The University plans to track scholars after they complete the program to determine the impact their time at Princeton has on their career trajectory.

"We view these bridge programs as an effort to advance diversity in particular disciplines and we hope this will deepen the pool of future faculty members, researchers and leaders in these fields," Kassam-Remtulla said.