The part of the brain that creates mental maps of one's environment plays a much broader role in memory and learning than was previously thought, according to new research published today in the journal Nature by researchers at Princeton University.

"Almost 40 years of research suggested that a certain region of the brain was devoted to spatial navigation," said David Tank, Princeton's Henry L. Hillman Professor in Molecular Biology and co-director of the Princeton Neuroscience Institute. "We found that this same region is also involved when navigating not only spatial environments but also cognitive ones."

The study looked at a region of the brain called the hippocampus that has been known since the 1970s to become active when rats travel around their environments. That research, and related work showing that cells in the nearby entorhinal cortex fire when animals reach specific locations, led to the finding that the brain creates an internal representation of the outside world — a sort of mental positioning system — that tells an animal where it is in its environment. These findings earned three scientists the 2014 Nobel Prize in Physiology or Medicine. 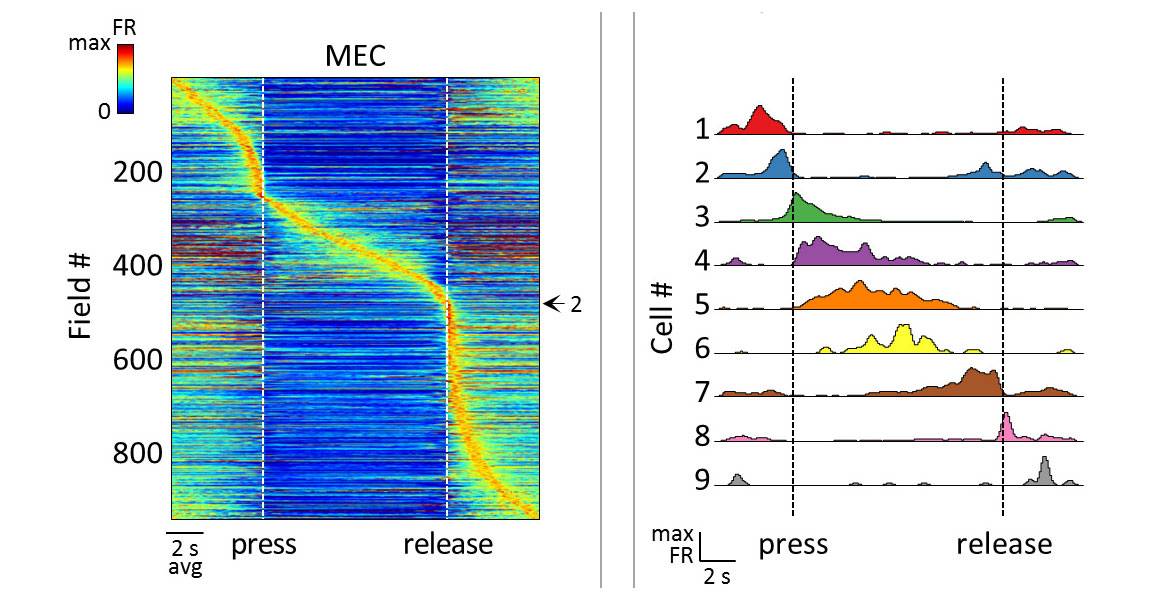 Researchers at Princeton found that brain cells known to be involved in making maps of the external environment, collectively known as the brain's "GPS," are also active in representing other tasks involved in memory and cognition. The researchers found that the neurons fired in sequence in accordance with the rats' activities as they listened to sounds and pressed levers to get rewards when the tone achieved a predetermined frequency. Above, the left diagram shows the neural activity (orange) in a group of neurons over a period of several seconds as the rats pressed and released the levers in response to the sounds they heard. The diagram on the right shows that individual cells (labeled 1 through 9) fire in sequence to represent the press and release of the lever. (Image courtesy of David Tank, Princeton University)

Now researchers at Princeton have found that those same brain regions are active when the brain is exploring a very different kind of environment, one involving listening to sounds. The researchers monitored neural activity as the rats listened and responded to certain sounds, and found similar firing patterns to those seen when rats are exploring their environments.

The research addresses a longstanding mystery in neuroscience, how the hippocampus could be associated both with making maps of the external environment and with making new memories. People with damage to the hippocampus, such as the amnesia patient known by the initials H.M. who participated in five decades of studies until his death in 2008, lack the ability to form new memories.

Rats were trained to depress a lever and then release it when the sound reached a certain frequency. (Illustration by Julia Kuhl)

In previous studies where scientists monitored the electrical activity of cells in the hippocampus, they found that the cells fired in sequences that represented where the animal was, which direction its head was facing, which direction it was traveling and where it was relative to a boundary, according to Dmitriy Aronov, first author on the paper who conducted the work while a postdoctoral researcher at the Princeton Neuroscience Institute and who is now an assistant professor of neuroscience at Columbia University. "The mystery was, what do these firing patterns have to do with memory?"

The researchers theorized that perhaps the hippocampus and the nearby entorhinal cortex, which work together to make these mental maps, were in fact not specific to mapping per se but were involved in more general cognitive tasks, and that mapping was just one aspect of larger cognitive tasks involving learning and memory. Perhaps the reason previous studies only turned up the location-finding tasks is because rats spend most of their time exploring their environments as they forage for food.

By giving the rats a different task, such as exploring sounds, the researchers might see evidence of cognitive activities in the hippocampal-entorhinal circuit. The researchers chose sound as an analogy to space because both can vary along a continuum: the rats can explore ever-increasing frequencies the way they would move forward along a lengthy corridor.

To test the theory, the researchers monitored the electrical activity of neurons in the hippocampal and entorhinal regions while the rats manipulated sounds and learned to associate certain sound frequencies with rewards. Tank and Aronov teamed with undergraduate Rhino Nevers, Class of 2018, to conduct the work. The researchers first taught the rats to depress a lever to increase the pitch, or frequency, of a tone being played over a speaker. The rats learned that if they released the lever when the tone reached a predetermined frequency range, they would receive a reward.

The team observed that the patterns of neuronal firing corresponded to the rats' behaviors during the task. Sequences of neural activity were produced as the rats advanced through the progression of frequencies, analogous to the sequences produced during traversing a progression of places in space. There were even patterns that corresponded to particular sound frequencies. The neurons involved in these firing patterns were identical to those involved in mapping and navigation. These cells included hippocampal place cells, so named because they fire when the rat is in a particular place, and entorhinal grid cells, which fire when the rats pass through certain locations.

The findings suggest that there are common mechanisms in the hippocampal-entorhinal system that can represent diverse sorts of tasks, said Tank, who is also director of the Simons Collaboration on the Global Brain. "The implication from our work is that these brain areas don't represent location specifically, but rather they can represent other relevant features of the animal's experience. When those features vary in a continuous way, sequences of neural activation are produced," Tank said.

The discovery fits with how we think about mapping our environment in the context of learning about new places and forming memories of experiences, said Aronov. "When you visit a new location, you don't only make a mental map, but you also form memories of your location. We feel that this study solves the mystery of the hippocampus in representing both memory and location, in that these neurons are general purpose neurons capable of representing any relevant information."

This work was supported by the Simons Foundation, National Institutes of Health grant 1K99NS093071 and the U.S. Federal Work-Study Program.

The paper, "Mapping of a non-spatial dimension by the hippocampal–entorhinal circuit," by Dmitriy Aronov, Rhino Nevers and David Tank, was published in the journal Nature on March 30, 2017. doi:10.1038/nature21692.