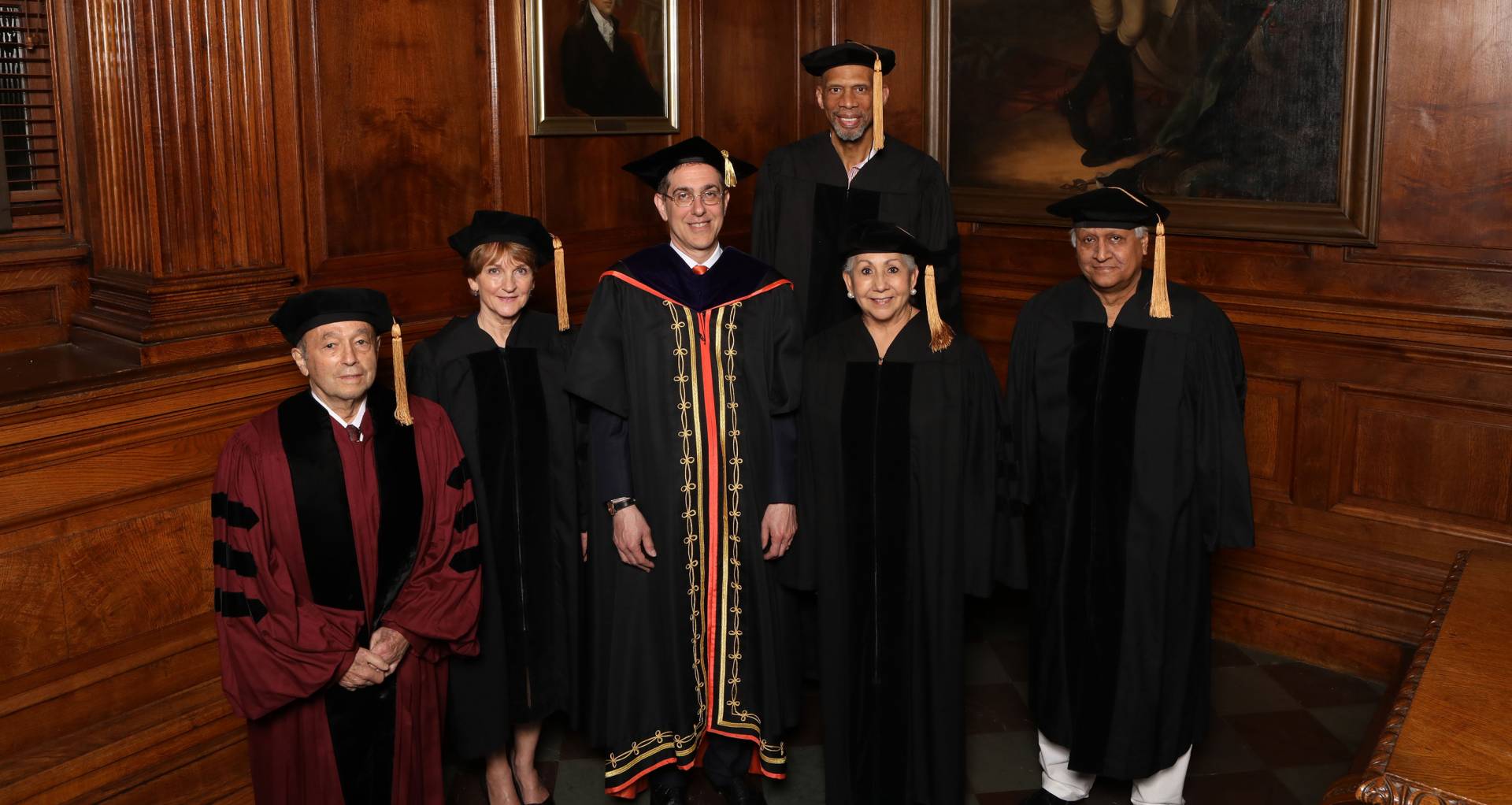 Princeton University awarded honorary degrees during Commencement exercises Tuesday, June 6, to five individuals for their contributions to athletics, education, the humanities, public service and the sciences.

Kareem Abdul-Jabbar, born Ferdinand Lewis Alcindor Jr., is the National Basketball Association's all-time leading scorer and a six-time NBA champion. As a student at the University of California-Los Angeles from which he graduated in 1969, he played on three consecutive national championship basketball teams. He was picked first in the 1969 NBA draft by the Milwaukee Bucks and joined the Los Angeles Lakers in 1975, retiring in 1989. Abdul-Jabbar is also a writer. He is the author of "Writings on the Wall – Searching for a New Equality Beyond Black and White," published in 2016, and his memoir, "Coach Wooden & Me," about his 50-year friendship with the late UCLA coach John Wooden, was released in May. Abdul-Jabbar is a regular contributing columnist on social and political issues for The Washington Post and Time magazine. He also writes action-mystery novels and comic books about the fictional character Mycroft Holmes, the elder brother of Sherlock Holmes. Abdul-Jabbar is chairman of Skyhook Foundation, which brings educational STEM opportunities to underserved communities. In 2015, his Emmy Award-winning HBO Sports Documentary, "Kareem: Minority of One," debuted as HBO's most watched and highest-rated sports documentary. In 2016, Abdul-Jabbar was awarded the Presidential Medal of Freedom by President Barack Obama.

Three times he lifted a championship trophy at UCLA, and six times he did the same in the NBA. Yet, as he says, "I can do more than stuff a ball through a hoop; my greatest asset is my mind." He puts that asset to work every day as an activist and ambassador for the underserved. His signature Skyhook lives on as the greatest shot in basketball history, and as the name of his foundation that gives youth a shot at their full potential. He is a prolific writer, and through heroes as diverse as Mycroft Holmes and John Wooden, he champions strength of character, faith and belief in the power of truth. Honored by his sport in the Hall of Fame, and honored by his country with the Medal of Freedom, we honor him today as a towering humanitarian.

Juliet García has had a long career in higher education in Texas and was the first Mexican-American woman president of a U.S. college or university. Three decades ago, she became president of Texas Southmost College (TSC). In 1991, TSC merged with the University of Texas-Brownsville (UTB), where García served as president for 22 years, leading an institution with a high percentage of students who are Hispanic and who are the first in their families to attend college. In 2014, with the merger of UTB and the University of Texas Pan American, García became executive director of the new University of Texas Institute of the Americas. In 2016, she was named senior adviser to the chancellor for community, national and global engagement of the University of Texas System. García was born in Brownsville, on the U.S.-Mexico border. Her father, who was born in Mexico, worked as a janitor and then as a customer service representative; her mother died when she was a child. García earned her bachelor's and master's degrees from the University of Houston and her Ph.D. from the University of Texas-Austin. She has served on the boards of trustees for the Ford Foundation and the Robert Wood Johnson Foundation. García was inducted into the Texas Women's Hall of Fame in 2000 and was named one of the top 10 college presidents by Time magazine in 2009.

Raised to believe in the power of education, this daughter of an immigrant rose to become the first Mexican-American woman to lead a university. Armed with a Ph.D., but also with a knowledge of place and a wisdom born of overcoming hardship and loss, she created a new pathway to college for Latino students and their families in the Texas borderlands. When this University's Latino alumni gathered this spring, they did so under the banner of ¡Adelante Tigres! Forward Tigers! Embodying a "frontier spirit" in a true "community university," she has successfully propelled thousands upon thousands of students forward: Adelante!

Since 2002, Pamela Matson has served as dean of the School of Earth, Energy and Environmental Sciences at Stanford University, where she is the Richard and Rhoda Goldman Professor in Environmental Sciences. Using an interdisciplinary approach, her research addresses a range of environmental and sustainability issues, including sustainability of agricultural systems and the vulnerability of people and places to climate change. As dean, she has led her school through significant transformation and co-led the Stanford Challenge Initiative on Environment and Sustainability; helped build the Woods Institute for the Environment and the Precourt Institute for Energy; founded the O'Donohue Family Stanford Educational Farm; and established the Emmett Interdisciplinary Program in Environment and Resources. Matson is co-author of "Pursuing Sustainability," editor of "Seeds of Sustainability," and contributor to the National Research Council volumes of "Our Common Journey: A Transition towards Sustainability and America's Climate Choices." She is a member of the National Academy of Sciences and the American Academy of Arts and Sciences and is the founding co-chair of the National Academies' Roundtable on Science and Technology for Sustainability. She serves on the boards of the Foundation for Food and Agriculture Research, the World Wildlife Fund, and Climate Works Foundation. Matson received a MacArthur Fellowship in 1995 and the 2013 Sustainability Services Award from the Ecological Society of America. She received her bachelor's degree from the University of Wisconsin-Eau Claire, her master's degree from Indiana University and Ph.D. from Oregon State University.

An earth scientist by profession, she is better described as an earth saver, working tirelessly to achieve a sustainable future for our planet. She expands knowledge, and she links knowledge with action; her initiatives "walk the talk." Her groundbreaking research seeks ways to feed an increasingly hungry and crowded world without sacrificing the very ecosystems on which we depend. Inspired leader of Stanford Earth and steadfast friend to this University's programs in ecology and environmental studies, she has mentored students and colleagues who join her in determined pursuit of a greener and greater future for humanity.

Jeremiah Ostriker is the Charles A. Young Professor of Astronomy on the Class of 1897 Foundation, Emeritus, and professor of astrophysical sciences, emeritus, at Princeton. He served as provost of the University from 1995 to 2000 and helped to establish its pioneering financial aid program that provides grants that do not have to be repaid. Ostriker joined the Princeton faculty in 1965 and transferred to emeritus status in 2012. He also is an astrophysicist and professor of astronomy at Columbia University. An influential researcher in theoretical astrophysics, Ostriker is the author or co-author of more than 500 scientific publications. His research is mostly focused on the theories of dark matter and dark energy; galaxy formation and black hole growth; the interaction between quasars and their surroundings; and the warm-hot intergalactic medium that is thought to exist in the spaces between galaxies. He was a leader in the development of the Sloan Digital Sky Survey and spent 16 years as chair of Princeton's astrophysical sciences department and directed the Princeton Institute for Computational Science and Engineering. Ostriker received the National Medal of Science in 2000 and was co-winner of the Gruber Foundation Cosmology Prize in 2015. In 2013, he was named a "Champion of Change," a White House honor that recognizes those who use open scientific data to promote scientific and social progress. He is a member or fellow of the American Academy of Arts and Sciences, National Academy of Sciences, American Philosophical Society, Royal Netherlands Academy of Arts and Sciences, and Royal Society of London. Ostriker received his bachelor's degree from Harvard University and his Ph.D. from the University of Chicago.

Growing up in the bright cityscape of New York, he marveled at the vast darkness of the cosmos. Over a half-century career, he revealed many of its stunning qualities, including the nature of dark matter and dark energy, whose existence dominates the structure and fate of our universe. Named by the White House as a "Champion of Change," he harnessed computing and electronics to accelerate research and promote collaboration across the scientific community. As provost of this University, he championed excellence, growth and change. His lifetime of curiosity and persistence allows this generation of scientists to grasp more fully the enormity of the universe and shed new light on dark places.

Bunker Roy is an Indian social activist and educator who founded the Barefoot College. Inspired by Gandhi and galvanized to respond to the 1967 famine in India, Roy moved from his home suburb in Rajasthan to help rural villagers. In 1972, he founded the organization Social Work and Research Centre, which came to be known as "Barefoot College" due to its focus on working with poor, often semiliterate, villagers. Over the past 30 years, some 3 million Indians have developed skills in teaching, medicine, engineering, sustainable energy and crafts through Barefoot College programs. Technicians trained through the college have brought a self-sufficiency model to villages across the country, and some have organized their own Barefoot Colleges. Roy has received numerous honors, including the 2004 Tyler Prize for Environmental Achievement and the 2005 Skoll Award for Social Entrepreneurship. In 2010, he was selected one of Time magazine's most influential people in the world. Roy received his bachelor's and master's degrees from St. Stephen's College.

When he completed his master's degree in 1967, his native country of India was in the grips of a severe famine. He envisioned using education as a tool to help his people help themselves, and the barefoot movement was born. On dirt floors in rural villages, he trained "barefoot professionals" to serve their villages as doctors and teachers, as engineers and architects, with a curriculum that targeted necessities like clean water, power and health care. His activism and ingenuity have transformed some of India's poorest communities, bringing them not only innovation and prosperity, but security, empowerment, self-sufficiency and hope.