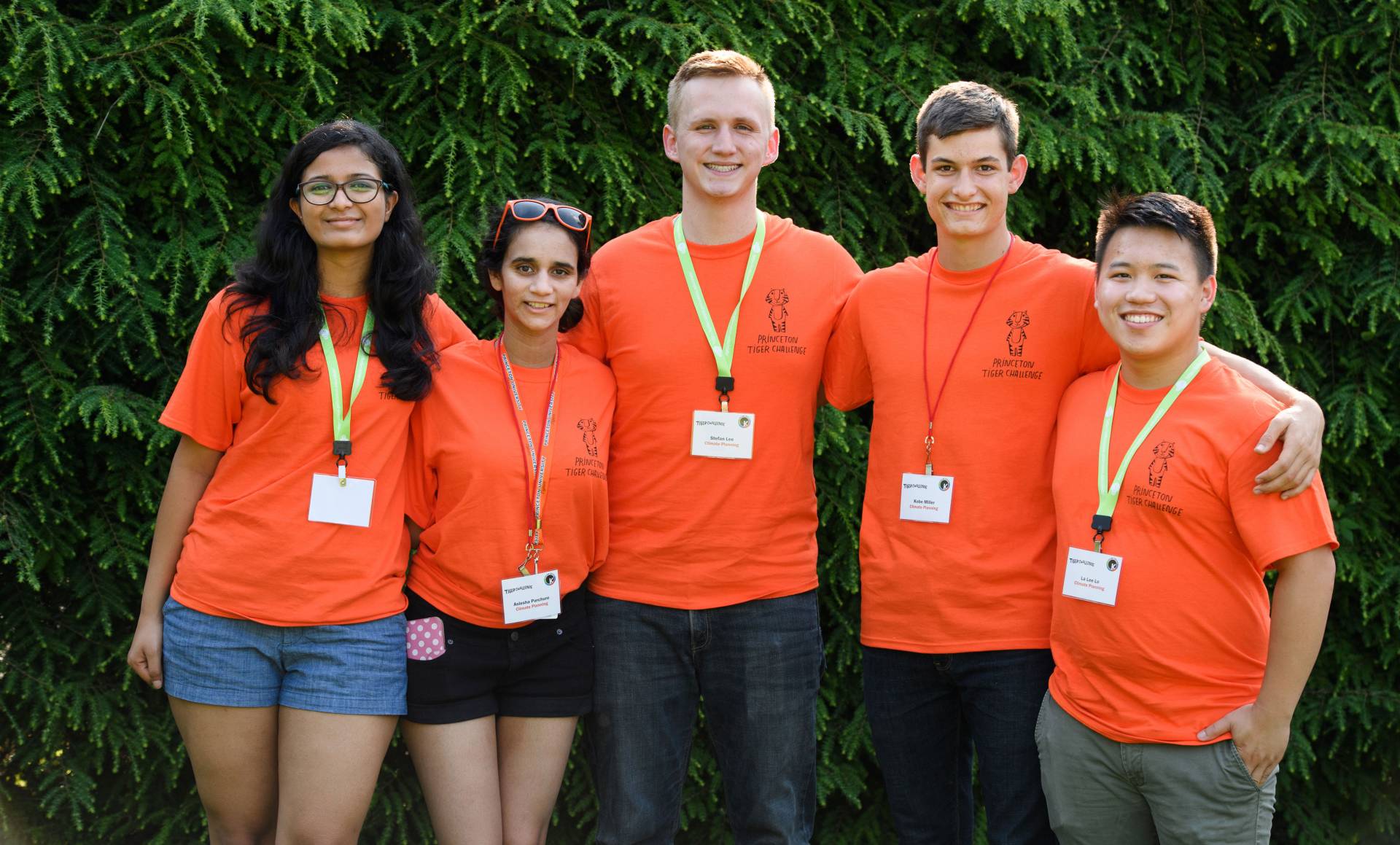 Municipalities around the country are working to limit climate change and prepare for its consequences. For the town of Princeton, planning is a priority.

As the town reevaluates its progress on climate positive activities, it has collaborated with five Princeton undergraduates as part of the University’s Tiger Challenge to help them address a vexing problem — how to increase residents’, businesses’ and town stakeholders’ engagement in the creation and implementation of a new plan that has greater impact.

The Tiger Challenge is a program in the Keller Center designed to help Princeton students tackle complex, real-world problems. This summer, the students learned about climate planning in Princeton through research and conversations with residents, municipal officials, sustainability experts and Tiger Challenge advisers.

“A lot has changed since Princeton’s 2009 Sustainability Plan was created,” said Molly Jones, executive director of Sustainable Princeton, a nonprofit organization working to reduce Princeton’s greenhouse footprint and a Tiger Challenge partner. “We are looking back to see where progress has been made, but it’s time to reassess the plan.” On Sept. 11, Sustainable Princeton announced that it has been awarded a $100,000 grant from the Robert Wood Johnson Foundation toward the development of the revised plan. The new Climate Action Plan (CAP) will focus on quantitative benchmarks and will seek extensive public ownership to arrive at its goals, explained Jones.

And this is where the Tiger Challenge comes in, said Christine Symington, project director of Sustainable Princeton. “There is more recognition now that climate change impacts towns and cities, and that towns and cities play an extremely important role in mitigating it,” she said. “We think the Tiger Challenge’s design thinking approach” — a process that puts the people most affected at the heart of innovation and problem-solving — “would be really helpful as we started thinking about what sort of plan would be successful and widely adopted by the community.”

Over the summer, the team developed several concepts for how they might help the municipality and other stakeholders bring more community voices to the table. The students are continuing their work this academic year.

“Through interviews and other empathy-oriented research methods, we found out what the core issues [in the municipality] are, and what we should do to try to remedy those,” said team member Stefan Lee, a senior majoring in history. “Climate change is such a vast problem, and working to figure out where we can insert ourselves to make the most important impact possible is tricky. There are lots of interests, and finding a way to integrate all those interests was a challenge.”

“Many of our insights came from interviews with business owners and residents who told us about their needs,” said team member Aslesha Parchure, a sophomore planning to major in operations research and financial engineering. “It was interesting to think of an individual person’s specific needs and wants, rather than the statistical aggregate demand for something. It was powerful to listen to people’s stories and hear what they wanted and why.”

Rafe Steinhauer, a 2007 alumnus and entrepreneurial program manager at the Keller Center who oversees the Tiger Challenge, said that at the end of the summer, the team presented 11 ideas to the municipality — all designed to increase participation in the upcoming climate planning process.

From interviews with residents, the students learned that residents are often overwhelmed by the climate-conscious actions they feel they should be taking, explained Steinhauer. “Being overwhelmed can lead to paralysis,” he said.

The team’s “Inchworm” idea, which Sustainable Princeton is also excited about, is to release the municipality’s CAP one topic at a time. “For example, if September is ‘storm-preparedness month,’ Sustainable Princeton would engage the town with actions that residents, businesses and the town can take to be more resilient to extreme weather events,” Steinhauer said. “The team also suggested a month on plastics, a month on energy consumption, and a month on food and agriculture, each associated with outreach campaigns, public dialogues and manageable actions residents could take.”

Liz Lempert, the mayor of Princeton, said that not only is the Tiger Challenge a great venue for students to engage meaningfully with the municipality, but it also allows the town to harness undergraduate students’ curiosity, creativity, compassion and courage.

“I’m very excited that this project is underway,” she said. “[The climate action plan] has been on my priority list for a while, and I think that having students go out and talk to people is a way for folks to let down their guard and think about things from a fresh perspective.”

This team is one of four teams that began in the Tiger Challenge this past summer, Steinhauer said. The other teams worked on how to decrease lead exposure among children in Trenton; improve the accuracy and reliability of technology that measures pulse and blood-oxygen levels in infants; and increase fulfilling employment opportunities for recently resettled refugees in New York City and New Jersey.

The team members working on sustainability say the Tiger Challenge has combined a learning experience with the opportunity to give back to the community they call home, at least for their four years at the University.

“I’ve been here for three years now, and rarely ventured beyond Palmer Square,” Lee said. “Being able to talk to people who have lived here for 30, 40 or 50 years was incredibly insightful.”

The Inchworm: Making a new climate action plan a success, a little bit at a time