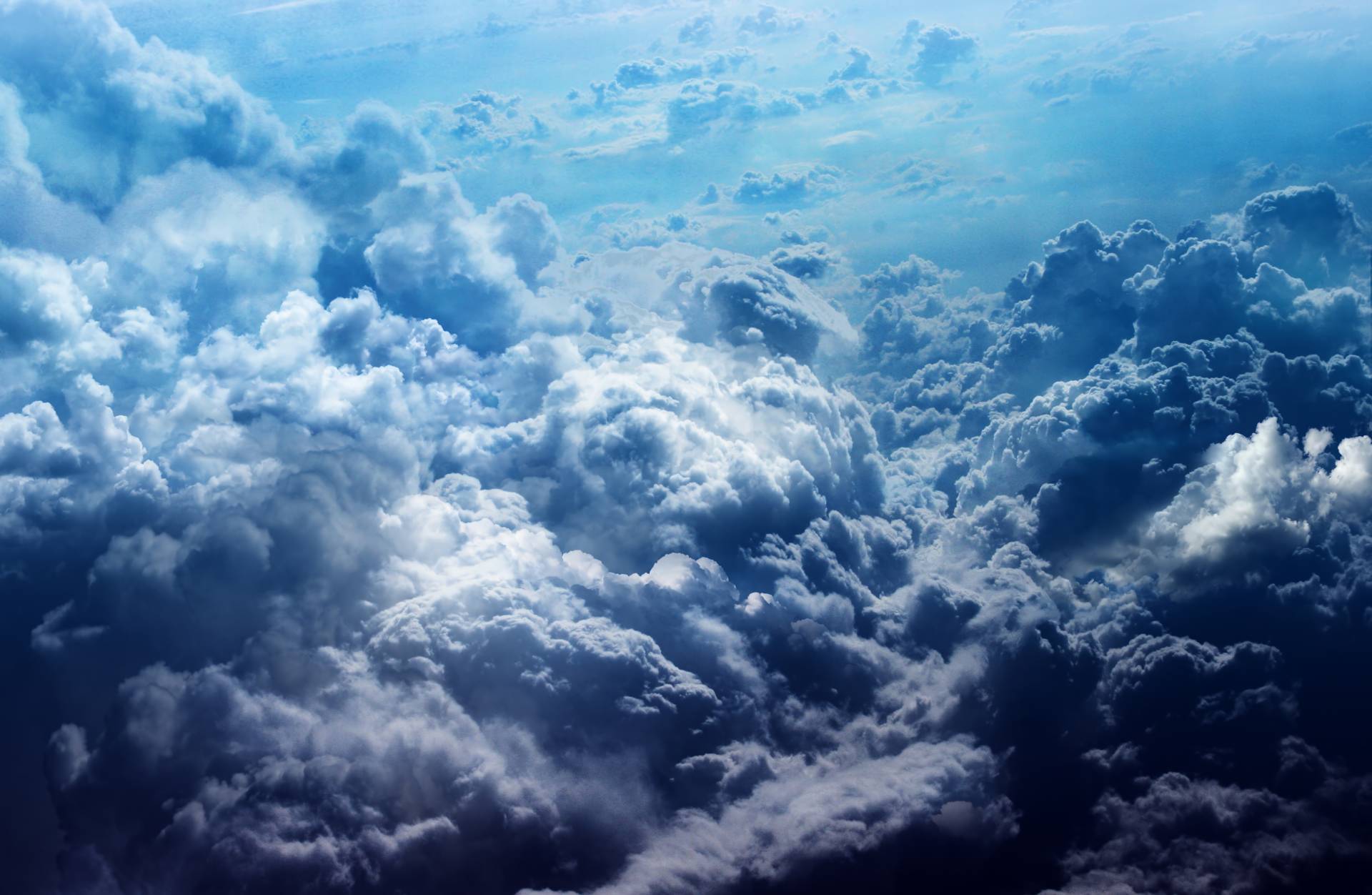 Princeton University researchers have found that the climate models scientists use to project future conditions on our planet underestimate the daily cooling effect of clouds, particularly over land. Models tend to factor in too much of the sun's daily heat, which results in warmer, drier conditions than might actually occur. The researchers found that these inaccuracies did not invalidate climate projections, but did increase the margin of error for understanding how climate change will affect us.

Princeton University researchers have found that the climate models scientists use to project future conditions on our planet underestimate the cooling effect that clouds have on a daily — and even hourly — basis, particularly over land.

The researchers report in the journal Nature Communications that models tend to factor in too much of the sun's daily heat, which results in warmer, drier conditions than might actually occur. The researchers found that inaccuracies in accounting for the diurnal, or daily, cloud cycle did not seem to invalidate climate projections, but they did increase the margin of error for a crucial tool scientists use to understand how climate change will affect us.

"It's important to get the right result for the right reason," said corresponding author Amilcare Porporato, a professor of civil and environmental engineering and the Princeton Environmental Institute. "These errors can trickle down into other changes, such as projecting fewer and weaker storms. We hope that our results are useful for improving how clouds are modeled, which would improve the calibration of climate models and make the results much more reliable."

Porporato and first author Jun Yin, a postdoctoral research associate in civil and environmental engineering, found that not accurately capturing the daily cloud cycle has models showing the sun bombarding Earth with an extra one or two watts of energy per square meter. The increased carbon dioxide in the atmosphere since the start of the Industrial Age is estimated to produce an extra 3.7 watts of energy per square meter. "The error here is half of that, so in that sense it becomes substantial," Porporato said.

Yin and Porporato undertook their study after attending a seminar on cloud coverage and climate sensitivity. "The speaker talked a lot about where the clouds are, but not when," Yin said. "We thought the timing was just as important and we were surprised to find there were fewer studies on that."

Clouds change from hour to hour and from day to day. Climate models do a good job of capturing the average cloud coverage, Yin said, but they miss important peaks in actual cloud coverage. These peaks can have a dramatic effect on daily conditions, such as in the early afternoon during the hottest part of the day.

"Climate scientists have the clouds, but they miss the timing," Porporato said. "There's a strong sensitivity between the daily cloud cycle and temperature. It's like a person putting on a blanket at night or using a parasol during the day. If you miss that, it makes a huge difference." 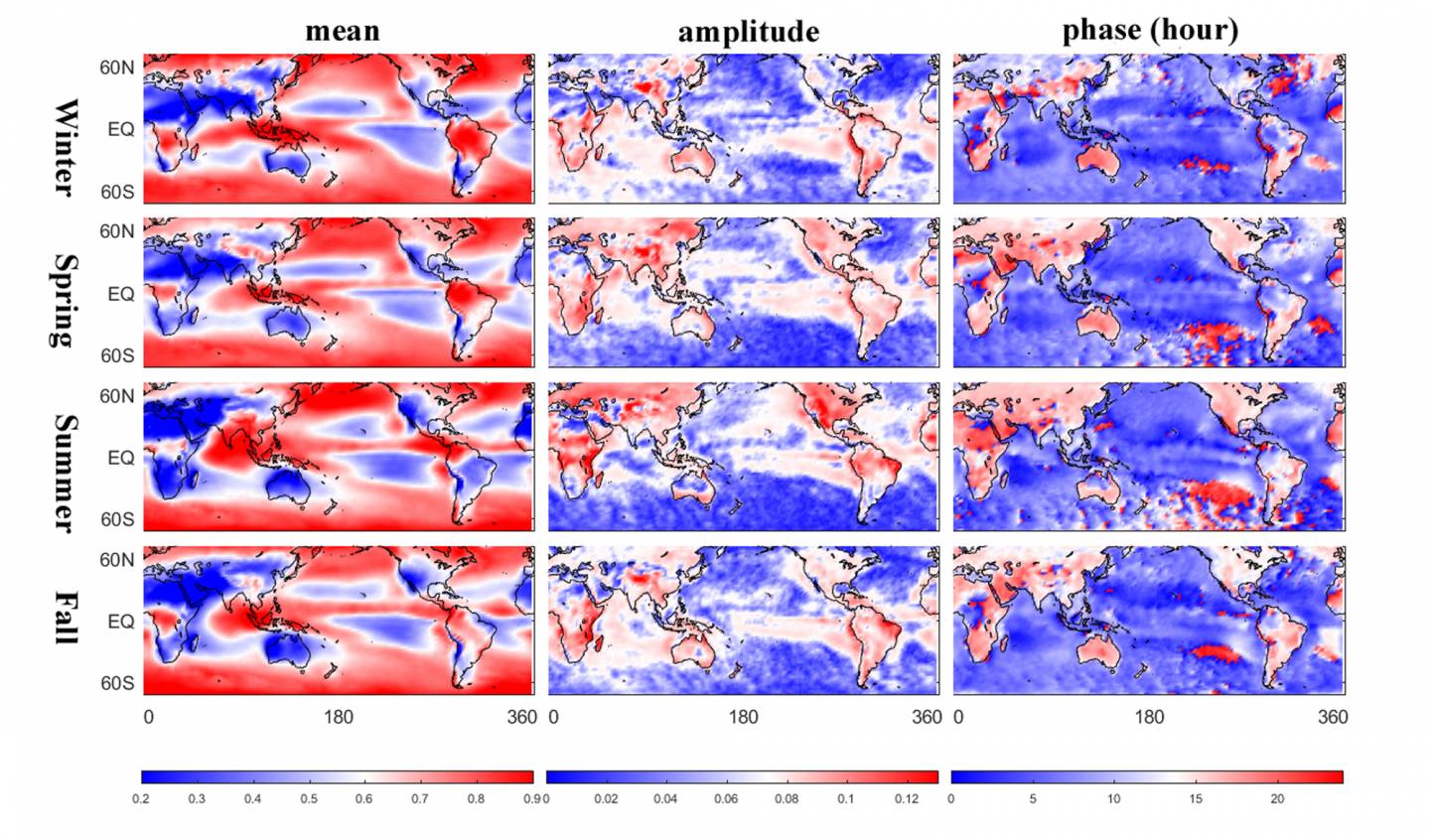 The researchers used both reanalysis data and satellite images from 1986-2005 to calculate the average diurnal cycles of clouds in each season worldwide. The reanalysis (above) shows (left to right) the mean (average), standard deviation (amplitude) and phase (timing) of global cloud coverage by season. The color scale indicates low (blue) to high (red) coverage, amplitude and timing. Most previous models suggest that clouds are thickest over land in the early morning, but the Princeton study showed that cloud coverage peaks more frequently in the afternoon.

Image by Jun Yin, Department of Civil and Environmental Engineering

The researchers used satellite images from 1986-2005 to calculate the average diurnal cycles of clouds in each season worldwide. Yin analyzed the cloud coverage at three-hour intervals, looking at more than 6,000 points on the globe measuring 175 miles by 175 miles each.

Yin and Porporato compared the averages they came up with to those from nine climate models used by climate scientists. The majority of models have the thickest coverage occurring in the morning over the land, rather than in the early afternoon when clouds shield the Earth from the sun's most intense heat. "A small difference in timing can have a big radiative impact," Yin said.

The researchers plan to explore the effect different types of clouds have on climate-model projections, as well as how cloud cycles influence the year-to-year variation of Earth's temperature, especially in relation to extreme rainfall.

Gabriel Katul, professor of hydrology and micrometeorology at Duke University, said that "the significance is quite high" of accurately modeling the daily cloud cycle. Katul was not involved in the research but is familiar with it.

The cloud cycle can indicate deficiencies in the characterization of surface heating and atmospheric water vapor, both of which are necessary for cloud formation, he said. Both factors also govern how the lowest portion of Earth's atmosphere — known as the atmospheric boundary layer — interacts with the planet's surface.

"The modeling of boundary-layer growth and collapse is fraught with difficulties because it involves complex processes that must be overly simplified in climate models," Katul said. "So, exploring the timing of cloud formation and cloud thickness is significant at the diurnal scale precisely because those timescales are the most relevant to boundary-layer dynamics and surface-atmosphere heat and water-vapor exchange."

When it comes to clouds, climate models have typically focused on mechanisms, spatial areas and timescales — such as air pollution and microphysics, hundreds of square kilometers, and seasons, respectively — that are larger and more generalized, Katul said. "There are practical reasons why data-model comparisons were conducted in a manner that masked the diurnal variation in clouds," he said. "Diurnal variation was somewhat masked by the fact that much of the climate-model performance was reported over longer-term and larger-scale averages."

By capturing the timing and thickness of the daily cloud cycle on a global scale, however, Yin and Porporato have provided scientists with a tool for confirming if climate models aptly portray cloud formation and the interaction between clouds and the atmosphere.

"The global coverage and emphasis on both 'timing' and 'amount' are notable. As far as I am aware, this is the first study to explore this manifold of models in such a coherent way," Katul said. "I am sure this type of work will offer new perspectives to improve the representation of clouds. I would not be surprised to see this paper highly cited in future IPCC [U.N. Intergovernmental Panel on Climate Change] reports."