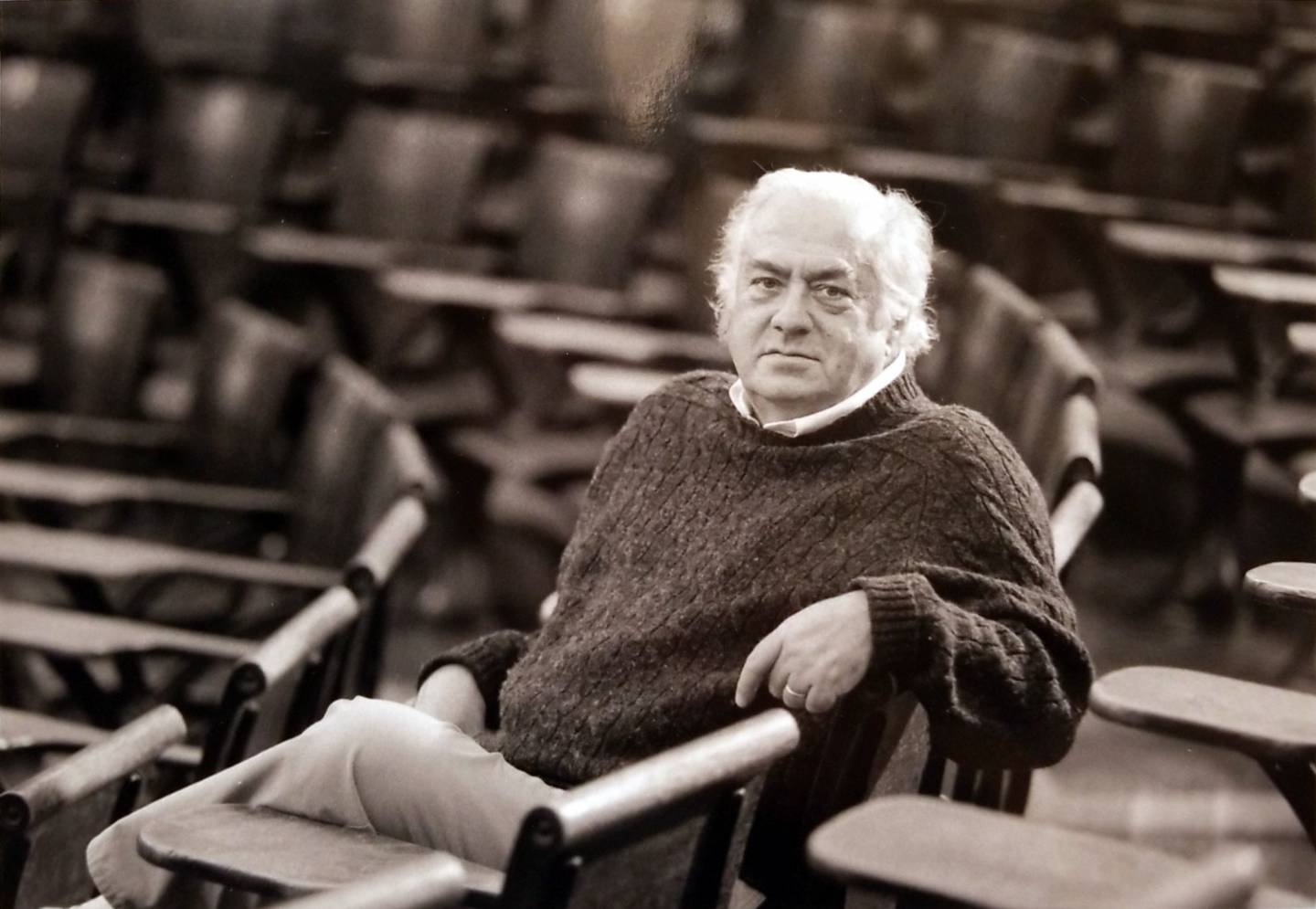 Deffeyes was widely trained as a geological engineer, chemical oceanographer and sedimentary petrologist. He joined the Princeton faculty in 1967 and transferred to emeritus status in 1998.

Deffeyes helped reshape the curriculum at Princeton and elsewhere as the field began to incorporate plate tectonics into its understanding of the Earth’s formation, said Lincoln Hollister, professor of geosciences, emeritus, and a senior geologist at Princeton. Before plate tectonics, concepts of the origins of mountains and ocean basins were based on these natural features being fixed on the globe.

“This paradigm shift is now the poster child for major change in the structure of a science,” Hollister said. “Ken translated the excitement of this paradigm shift to his classes, and the students came to the department in droves. He was a ‘pied piper’ for recruiting students into our program.”

Deffeyes' outsize personality, passion for his work, and deep knowledge of geological history and petrology were memorialized in John McPhee’s “Basin and Range” (1981), in which McPhee, a Ferris Professor of Journalism in Residence at Princeton, followed Deffeyes cross country to observe natural formations that tell the story of the Earth’s development. The book became part of McPhee’s “Annals of the Former World,” a narrative geological history of North America, which was awarded a Pulitzer Prize in 1999.

In “Basin and Range,” McPhee described Deffeyes as “a big man with a tenured waistline. His hair flies behind him like Ludwig van Beethoven’s. He lectures in sneakers. His voice is syllabic, elocutionary, operatic.”

Deffeyes’ fascination with Earth sciences began early in life. He was born Dec. 26, 1931 in Oklahoma City. His parents, Hazel and J.A. "Dee" Deffeyes, were teachers. His father left the profession to become a petroleum engineer, often bringing Deffeyes along to drilling sites in Oklahoma and Kansas as his assignments changed. The family eventually settled in Casper, Wyoming, where Deffeyes completed high school and developed an interest in mineral collection at nearby Casper Mountain.

In 1953, Deffeyes graduated from the Colorado School of Mines with a degree in geological engineering. He accepted a job from Shell Development Co. in Houston, but soon was drafted into the U.S. Army, which assigned him to a unit of the Army Corps of Engineers that produced topographic maps at the Presidio in San Francisco.

After two years of service, Deffeyes entered Princeton to study geological engineering, earning his Ph.D. in 1959.

His doctoral thesis examined volcanic ash beds in Nevada, which he discovered had been altered to millions of tons of zeolites. At the urging of one of his professors, Deffeyes published a paper on his findings in the Journal of Sedimentary Petrology that led to the emergence of the natural zeolite industry. Zeolites are aluminosilicates that have numerous uses across industries including water purification and water adsorption. They also are used as catalysts in oil refining.

Upon receiving his Ph.D., Deffeyes rejoined Shell. While working there as a researcher evaluating oil fields, he met M. King Hubbert, who in 1956 postulated that the amount of petroleum that could be extracted from the Earth was finite and that U.S. oil production eventually would peak and decline. Years later, Deffeyes, a proponent of Hubbert’s work, expanded the theory and wrote three books on the subject, “Hubbert’s Peak: The Impending World Oil Shortage” (2001); “Beyond Oil: The View from Hubbert's Peak” (2005); and “When Oil Peaked” (2010).

Deffeyes is also the author of “Uranium Distribution in Mined Deposits and in the Earth's Crust” (1978) and he co-authored the textbook "Physical Geography" (1976). He also wrote a book with his son, Stephen, a graphic designer, titled “Nanoscale: Visualizing an Invisible World” (2009), inspired by Linus Pauling and Roger Hayward’s “The Architecture of Molecules.”

Before joining the Princeton faculty, Deffeyes taught briefly at the University of Minnesota and Oregon State University, where his research focused on lakes and oceans, and included work that provided evidence of seafloor spreading.

Hollister said Deffeyes was a “utility infielder” in the department. “Wherever someone was needed to fill out an exam committee or thesis defense, Ken could be counted on to bring diversity and wit to the proceedings,” Hollister said. “He also taught courses over a wide range of subjects. He could ‘play’ any position.”

Deffeyes was a motivating force behind the geology field trips that enlivened beginning geology courses and freshman seminars, traveling with Princeton students to sites such as the Isle of Arran in Scotland and Mammoth Lakes, California, where, Deffeyes said, "students can ask questions and find the answers directly from the rock."

The first Mammoth Lakes trip occurred during fall break in 1988, allowing students to spend a week in the field exploring natural occurrences of geological materials. Mammoth Lakes was ideal as it featured active faulting, recent glaciation and young volcanoes. After Princeton initiated a program in freshman seminars, the Mammoth field trip became the University’s longest-running seminar.

Catherine Cullicott, who earned a bachelor’s degree in geological and geophysical sciences in 1989, said she met Deffeyes as a junior at an informational seminar for graduate study. She asked him if not performing fieldwork that summer would hurt her chances at graduate admission because she had another job lined up. His response was that it shouldn’t, but also, that he happened to be working with a mining company looking for field assistants that summer. She remembers him asking, “How would you feel about camping out in Nevada for the summer?”

Cullicott didn’t hesitate to accept, and she said the experience turned into a senior thesis, a full-time job for the two years she took off between college and graduate school, and two additional summers of work while she earned her master’s degree in geology. Almost 30 years later when she asked Deffeyes for a recommendation for a doctoral program in science education, he answered with an enthusiastic “yes.”

Joseph Kirschvink, the Nico and Marilyn Van Wingen Professor of Geobiology at the California Institute of Technology who earned a doctorate from Princeton in 1979, said Deffeyes took great interest in his discovery in 1977 of magnetic materials in the abdomens of honey bees, helping Kirschvink to solve a central query in his research. Deffeyes co-authored two papers with Kirschvink on that work.

“It was difficult back then to locate precisely where the magnetic materials might be,” Kirschvink said. “Ken, who was an expert at mineralogy, did a back-of-the-envelope calculation and figured out that the department’s old Debye-Scherrer X-ray camera could be converted into a stereo (3-D) iron imaging system that could help us determine the iron distribution within the body of a freeze-dried honeybee. As I recall, this involved taping a 3-foot long cardboard tube to the business end of the camera, and putting the bee on a toothpick at the far end, next to the X-ray film. By rotating the bee and taking X-ray snapshots at the Cu-alpha line (that fluoresces with iron), we made stereo image pairs that showed the 3-D distribution of iron. Fun!”

Deffeyes is survived by his brother, Robert; son, Stephen; daughter and son-in-law, Sarah Domingo, Class of 1991, and Martin Domingo; and two grandchildren.

Memorial donations can be made to Rady Children’s Hospital Foundation, 3020 Children’s Way, MC 5005, San Diego, CA 92123, with a note to direct the donation to Liam’s Fund for Neurosurgery.

Stephen Deffeyes said his father's final wishes were to have his ashes interred in a missile and dropped into the deepest portion of the Marianas Trench.

View or share comments on a blog intended to honor Deffeyes’ life and legacy.