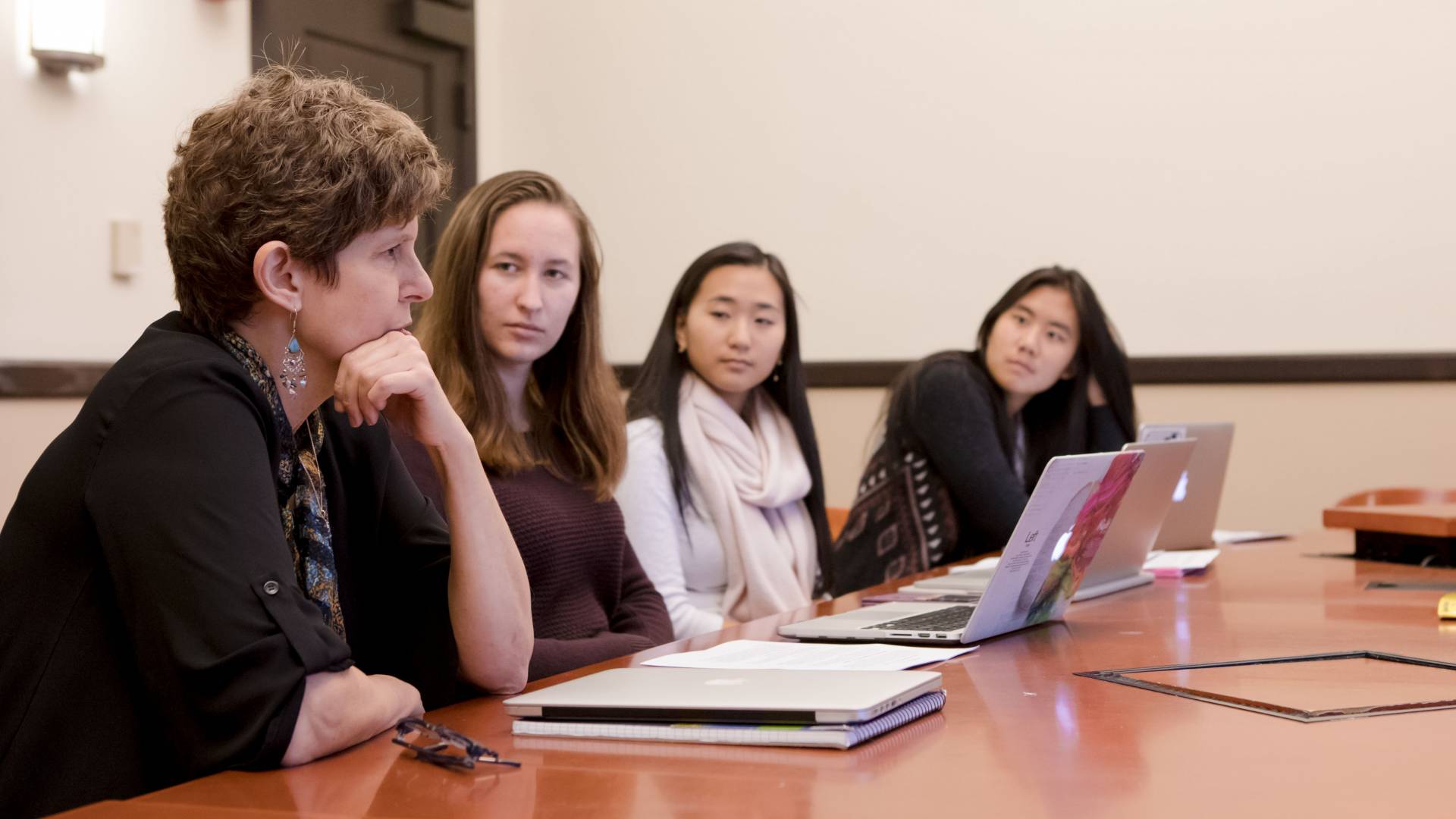 'Sanctuary' is focus of freshman seminar

Pooja Makhijani and Denise Valenti for the Office of Communications

What are the meanings of “sanctuary?” Why has sanctuary become a key term in current debates about immigration? Is there an ethics of hospitality? Does citizenship determine human rights?

A small group of first-year students spent their first semester at Princeton last fall seeking answers to these questions as part of “Sanctuary,” the Dean Eva Gossman Seminar in Human Values, taught by Shaun Marmon, an associate professor in the Department of Religion.

Freshman seminars, which allow students to build strong relationships with faculty members and classmates in a close-knit intellectual setting, are often seminal experiences for undergraduates. As a Freshman Seminar in Service and Civic Engagement — a collaboration between the Program of Freshman Seminars in the Residential Colleges and the Community-Based Learning Initiative (CBLI) —“Sanctuary” was built around engagement with the needs of the broader Princeton community. 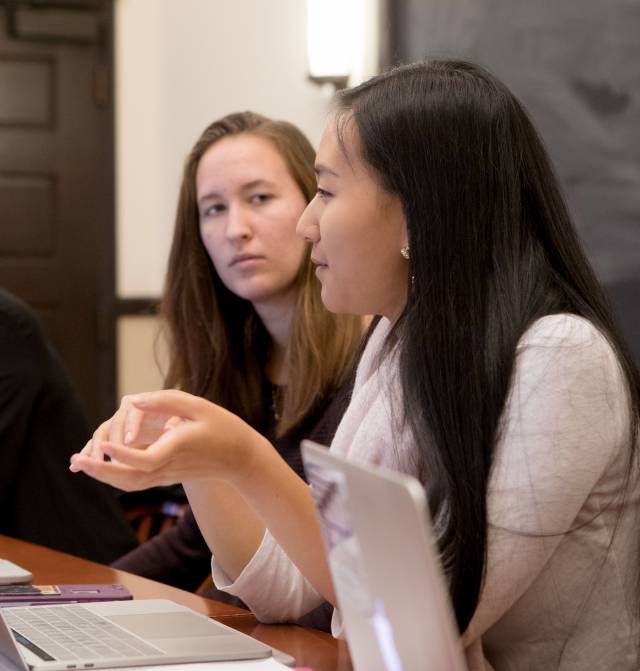 Christy Lee (right), seated next to classmate Pauline Schnelzer, said that one of the aspects of the seminar she most enjoyed was "hearing the stories of life beyond Nassau Street from some of Princeton's community leaders."

“Service courses give students the opportunity to do very rigorous academic work and to connect the classroom and the community,” Marmon said.

"The first year is foundational in making service a central part of the Princeton experience and inculcating an ethos of service among students," said Trisha Thorme, director of CBLI.

Of the 75 freshman seminars the University is offering in the 2017-18 academic year, five are Freshman Seminars in Service and Civic Engagement, up from two in 2016-17.

Marmon created her course in response to the anti-immigrant rhetoric of the 2016 presidential election and changing U.S. policies toward migrants and refugees. "Like many people, I was opposed to the 'travel ban,'" she said. "I went to a demonstration in Philadelphia in January [2017], when refugees were being detained at the airport. I was reading people's signs, and I was very intrigued by the language being used on these signs — a mixture of human rights language with different scriptural quotations, and references to 'sanctuary.'"

"I wanted to pursue this — both historically, in terms of texts, and in terms of the social, ethical and moral implications,” Marmon said. “But I also wanted to connect this inquiry to the real-life consequences of immigration policies for our communities, especially for our next-door neighbors who are labeled ‘undocumented.’ Teaching this course through CBLI made that connection possible.”

In class, the students explored the concepts of sanctuary, hospitality and seeking refuge across a range of historical and cultural settings. They discussed texts including "The Refugee" by Elie Wiesel, Homer's "Odyssey," excerpts from the Bible and Qur'an, “Brother, I’m Dying," by Edwidge Danticat and "The Perplexities of the Rights of Man" by Hannah Arendt.

They then took their ideas into the real world, working in partnership with Princeton-area organizations to increase access to legal resources for low-income, undocumented migrants.

On Jan. 9, the students presented the findings of their service work to University and community partners, including Elisa Neira, executive director of Princeton Human Services Department; Adriana Abizadeh, executive director of the Latin American Legal Defense and Education Fund (LALDEF) in Trenton; Larry Spruill, area coordinator for Princeton University Housing and Real Estate Services, who is a LALDEF trustee and a member of Princeton’s Human Services Commission; and Ryan Lilienthal, a Princeton immigration attorney and advocate.

Eva Gossman, associate dean of the college from 1987 to 1996 and a Holocaust survivor for whom the seminar was established in 2004, also attended. Gossman’s experiences as a young girl hidden from the Nazis by a Slovak woman were a frequent subject of discussion in class, Marmon said.

At the presentation, students discussed how they had approached the service component of the seminar. After consulting with the community partners during the semester, the students canvassed local attorneys in immigration, wage theft, landlord/tenant and family law. Of the 37 lawyers contacted, 11 responded and agreed to be interviewed. Of those, eight said they were willing to work with the students’ community partners and take on at least one pro bono case per year. 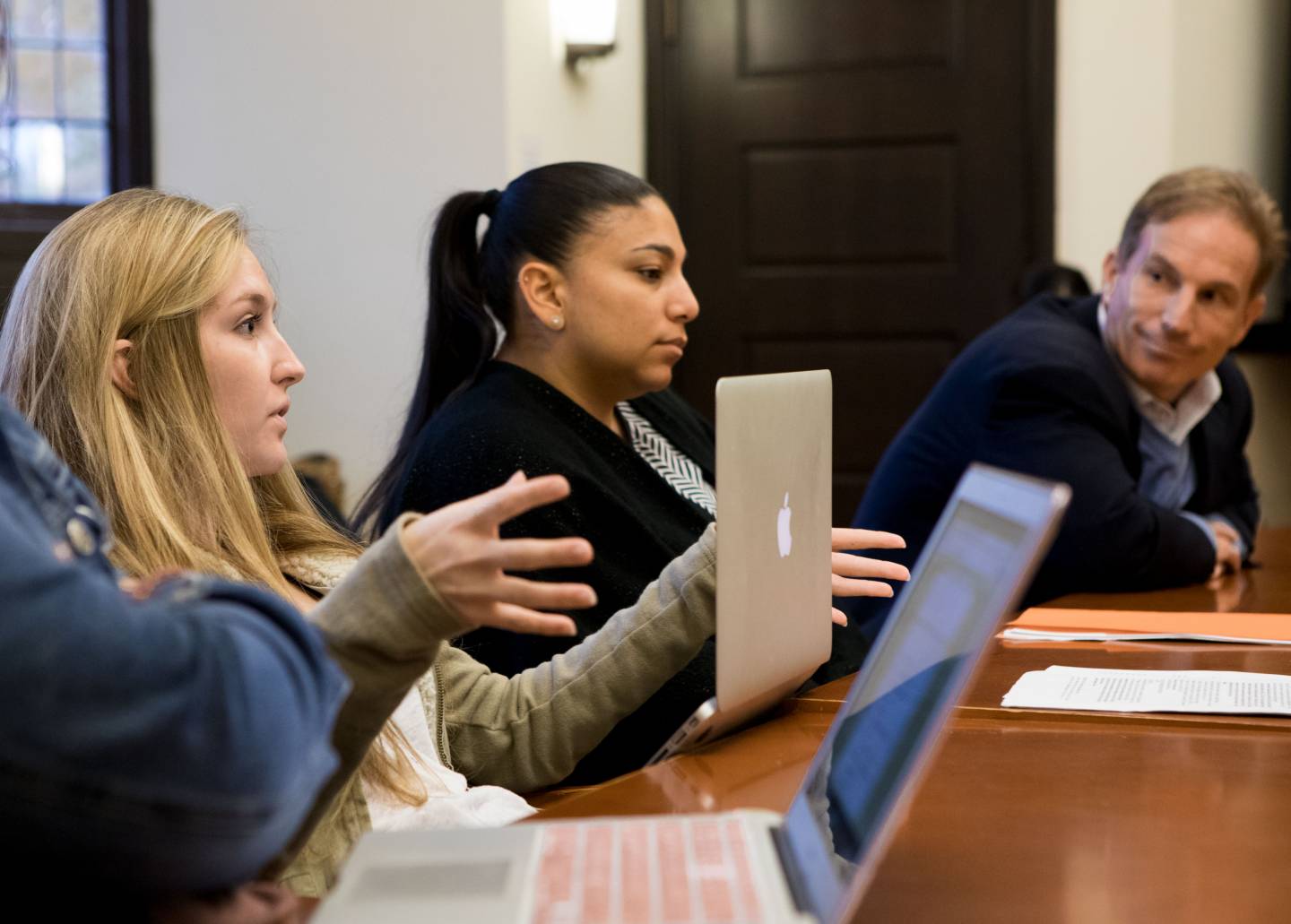 Morgan McKinzie (left), joins the conversation with Adriana Abizadeh (center), executive director of the Latin American Legal Defense and Education Fund in Trenton, New Jersey; and Ryan Lilienthal (right), an immigration lawyer in Princeton. The discussion focused on the term "legal resources" and how their service project could identify those resources.

In their survey, the students discovered attorneys most often were inhibited by financial considerations, and so they explored ways to make pro bono immigrant work more attractive and feasible, either by providing volunteer support or incentivizing it through continuing legal education (CLE) credits.

The students also assessed the barriers for immigrants seeking services, such as transportation and child care.

But as the students learned, the biggest hurdle for anyone who is undocumented is their lack of a legal status. “There are situations where the law denies personhood or humanity,” Marmon said.

“This class made me look at ‘sanctuary’ from several perspectives,” said student Pauline Schnelzer. “I came to the conclusion that a sanctuary is a space or state in which a person's right to dignity, safety and justice can't be violated.”

“My biggest takeaway from this class was that human rights are incredibly important, and they are not inherent,” she said.

The students noted the conflation of human rights with legal rights is profound, though it is not an insurmountable barrier to offering sanctuary. Gossman asked why there wasn’t more focus on working with government officials to make changes to the laws. The students responded that they had sought to provide immediate relief through their service project (which was chosen in consultation with the community partners before the semester began), and noted that some attorneys they interviewed were interested in long-term solutions to offer rights and protections to undocumented migrants.

Community education and advocacy is something the students said they hope to continue.

"I believe that going forward, the way I view any class or future occupation will be altered in the realization that there is always a way in which you can get involved to affect the community positively," said student Christy Lee.

“Accepting people into our country is not an act of mercy, it is a moral obligation, a moral imperative,” said student Hannah Wang. “That is put upon us when a refugee comes to our borders. It’s not about extending charity. It’s about their right to lead a dignified life.”

Participants in the Dean Eva Gossman Seminar in Human Values pose for a picture with its namesake, Eva Gossman (second from left), a former associate dean of the college and Holocaust survivor.