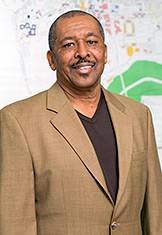 Spruill, who has worked at the University for more than 24 years, received the Journey Award for Lifetime Service for his commitment to fostering community on and off campus.

The award was presented at the University's King Day ceremony in Richardson Auditorium of Alexander Hall. Members of the University community nominated candidates based on their support for King's philosophy and teachings and their contributions to the improvement of civil rights and/or human rights. Preference was given to candidates who have positively affected the University campus and/or community. Members of the MLK Day Committee judged the nominations for the award, which was instituted in 2005.

"Like Dr. King, Larry Spruill is committed to building community, to illuminating pathways to opportunity, to defending the less fortunate, and to boldly challenging those who stand in the way of progress," President Christopher L. Eisgruber said in presenting the award to Spruill. "Thank you, Larry, for all you have done to enhance the quality of life in our campus and local communities."

Spruill is a "mentor to the young, a tireless advocate, a voice for the voiceless," Tommy Parker, a mail carrier in Mail Services, wrote in nominating Spruill for the award. "He is a thoughtful, unselfish, willing worker in pursuit of the dream for all."

Spruill, who helps maintain and oversee the condition of University housing units, is a familiar face to residents. As one resident of the Hibben-Maggie Apartments wrote in a 2010 letter to then-President Shirley M. Tilghman: "He single-handedly spread happiness across a couple of generations of foreign researchers at Princeton, and spread the good name of the University literally across the globe."

As a longtime resident of Princeton, Spruill has been closely involved for decades with matters of race, diversity, inclusion and civil rights. He has served as a volunteer leader with many community-based organizations, including Not In Our Town, Princeton to End the New Jim Crow, the Princeton Public Schools Minority Education Committee, the YMCA Y-Scholars Program, the Trenton Chapter of the NAACP and the Princeton Human Services Commission.

"I feel Larry is so successful as a community mentor and leader because of the same attributes that help him succeed in his University role — warmth, generosity, leadership and determination," Andrew Kane, the executive director of Housing and Real Estate Services, wrote in a letter supporting Spruill's nomination.

In 2004, Spruill founded Committed and Faithful Princetonians, a mentoring group that provides academic and social development support to at-risk youth. The organization works to enhance the self-awareness and self-esteem of young people through a variety of public speakers, community partnerships and team-building field trips.

"Larry's work with the Committed Princetonians has changed the course of many lives," Princeton Mayor Liz Lempert wrote in a letter supporting Spruill's nomination. "It's not just what Larry has done for the community, it's how he has done it. Larry has a kind, thoughtful way about him that brings out the best in everyone around him. He is a peacemaker."