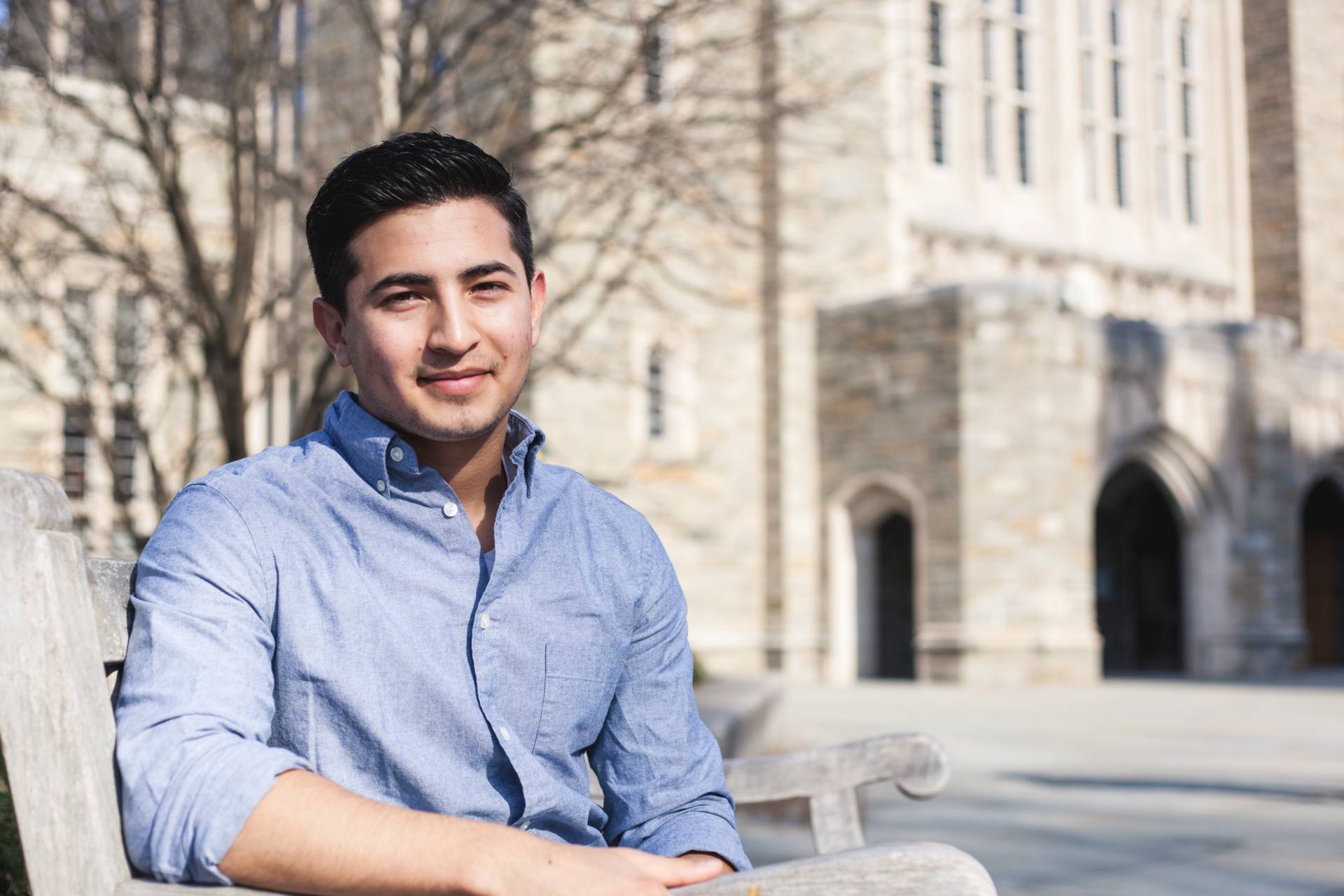 Danny José Navarrete, a member of the Class of 2019 and a first-generation student, reflects on his path to Princeton, his inspiration for pursuing a career in science, and his hopes for prospective students who come from backgrounds similar to his.

Danny José Navarrete, a member of the Class of 2019 and a first-generation student at Princeton, is majoring in ecology and evolutionary biology and is also pursuing a certificate in Latin American studies. He applied to Princeton through the QuestBridge College Match Program, a nonprofit that links high-achieving, low-income students with partner universities.

Navarrete chose Princeton because of the research opportunities it provides at the undergraduate level and its smaller class sizes. Outside of the classroom, he is a member of the student organization Princeton Latinos y Amigos.

In the Q&A below, he reflects on his path to Princeton, his inspiration for pursuing a career in science, and his hopes for prospective students who come from backgrounds similar to his.

How would you describe your childhood and family life?

Growing up in the rural Central Valley town of Newman, California, I was surrounded by farms, orchards and a strong family that supported me. However, my education felt very limited. Perhaps it was the lack of funding in my public school, the poor quality of teaching, the miles of separation from a university, and missing enrichment opportunities.

When I was accepted to Princeton, some of my high school classmates believed that it was only because I was “poor and Mexican,” not because I actually deserved it. “Poor and Mexican” are two adjectives that have defined me and my family for a long time.

My parents, who came from Michoacán, Mexico, understood the value of education in this country. They taught me to not take that for granted, to recognize my privilege as a U.S. citizen, and to take advantage of all the opportunities I have here, especially when they are limited or competitive.

What was your inspiration for pursuing a career in science?

I always had a passion for biology but I never thought of people like me as scientists. “Poor and Mexican” was not something I associated with professional careers.

I had never met a scientist until I interned through the Stanford Institutes of Medicine Summer Research (SIMR) program in 2014, where I was involved in lab research on breast cancer using stem cells. The experience introduced me to academia and oriented me towards my career goals in disease research. It inspired my decision to apply to the Ivy League because I wanted access to the resources that the best scientists had.

What was an aspect of your experience as a first-generation student that was unexpected and how did you navigate that?

What I did not expect was how challenging it would really be here. My first two years were a mess of anxiety, self-deprecation, doubt and depression. I was at a point where I started believing those who said I was only admitted for diversity and felt out of place. However, I was raised to take advantage of opportunities. I started seeking help from Princeton’s resources, such as counseling, professors' office hours and tutoring. I caught up.

What opportunities at Princeton have had the greatest impact on your undergraduate experience?

I have worked as a part-time research assistant, which allowed me to participate in projects in many areas such as in infectious disease ecology, as well as to travel and present my work at scientific conferences. Through this process, I learned that a lot of people in the academic community actually believe in me so I became confident in my abilities as a student and future scientist.

I am spending this spring semester in Gamboa, Panama, with the Department of Ecology and Evolutionary Biology's Semester in the Field program at the Smithsonian Tropical Research Institute. A big part of the coursework is developing research projects in the field, including the tropical rainforest and coral reef. It is an amazing opportunity to be in such a beautiful, biologically diverse location while I continue to develop my scientific skills. The coursework contributes to meeting the academic requirements for my major and my certificate in Latin American studies.

How would you describe yourself now?

After finishing the first semester of my third year at Princeton, I realize that I am exactly where I want to be in my life so far. I am proud to be “Mexican and poor” but I will also be defined by words like “academic,” “scientist” and “Princeton.”

What might you say to other prospective first-gen students?

My advice to other students who come from disadvantaged backgrounds is to take advantage of all the opportunities and resources you have and ask for help if you can’t find them because you really are worth more than the labels and stereotypes put against you.

A condensed version of this story appeared on Princeton’s #TellUsTigers Instagram campaign and Facebook page, garnering thousands of "likes" and hundreds of comments, some of which appear below. 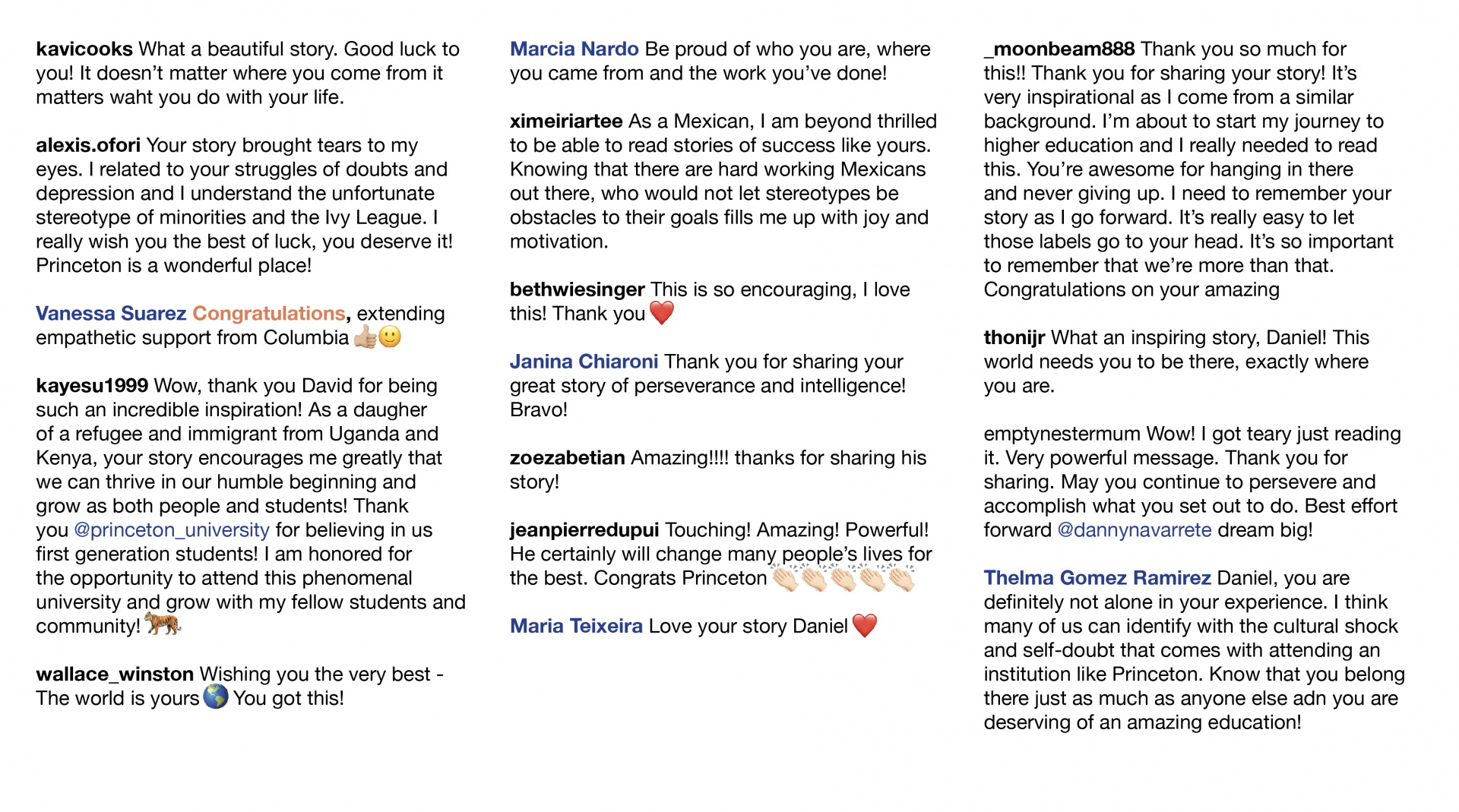