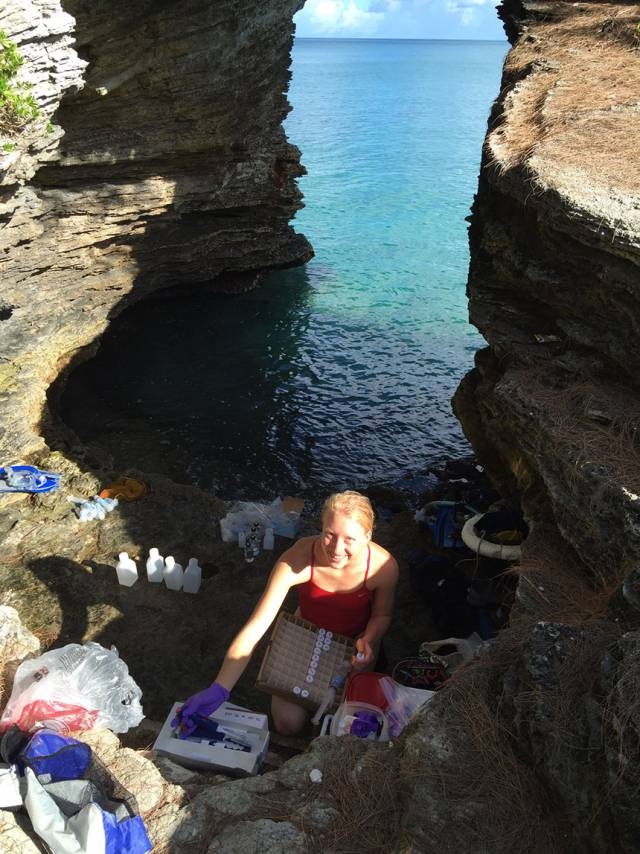 Zoe Sims (above), who received her degree in ecology and evolutionary biology and a certificate in environmental studies on June 6, has distinguished herself as a scientist and a student during her time at Princeton. For her senior thesis, Sims spent two years studying the effect of groundwater pollution on coral reefs in Bermuda. In the photo above, Sims processes water samples from a study site on Bermuda's North Shore during summer 2015.

It was after several hours of boating and diving along the coast of Bermuda in the summer of 2015 that then-sophomore Zoe Sims realized that she, for the first time, was in charge.

Sims, who graduated from Princeton University June 6, was studying the effects of groundwater pollution on the health of Bermuda's coral reefs, a topic that would become the focus of her senior thesis research. But her initial search for the points where freshwater from the island enters the sea had been fruitless. Finally, one of the graduate students helping Sims asked what she wanted to do next. Then they waited for her to answer.

"It was my decision — nobody was going to tell me we were done, or say, 'good job, go home,'" Sims recalled. "I was receiving a lot of help and support, especially from my co-adviser Anne [Cohen of the Woods Hole Oceanographic Institution], who guided me closely throughout the project. But I also had more autonomy and responsibility than I'd ever had on a project before. The ultimate decision of what I wanted out of my research and how ambitious I wanted to be, that was on me. I remember that hitting me my first summer.

"That's one of the things I'm most grateful for," she said. "This project gave me an opportunity to define my own work."

Sims soon found the groundwater entry point she was looking for — it turned out that high tides can obscure it. During the next two years, she studied the reefs of Bermuda and found that nitrogen from polluted groundwater inhibits coral growth, but that healthy fish populations and relatively low levels of phosphate pollution have allowed the reefs to remain stable in spite of pollution coming from the groundwater. The pollutants largely originate from residential sewage, which Bermudians dispose of in untreated cesspits.

Sims conducted her research with support from the PEI Environmental Scholars Program, through which she was named a 2015 Newton Family Scholar. The award provides sophomores with up to $15,000 to support their research for two years. Sims worked with her Princeton adviser Stephen Pacala, the Frederick D. Petrie Professor in Ecology and Evolutionary Biology, and Cohen. 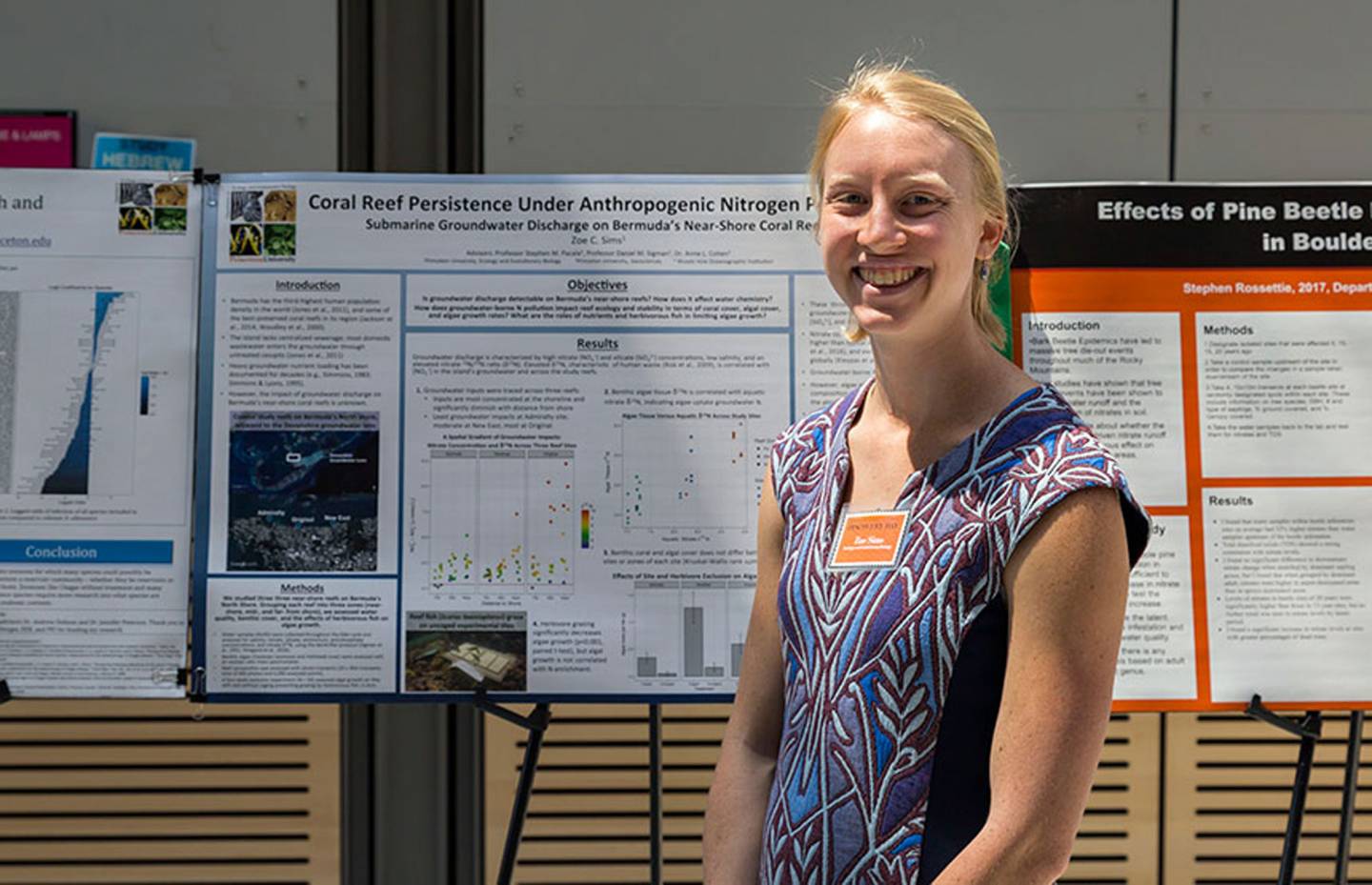 During her time at Princeton, Sims — who received her degree in ecology and evolutionary biology and a certificate in environmental studies — distinguished herself as a scientist and a student. In addition to the Newton Family scholarship and senior thesis prize, Sims received the 2016 Becky Colvin Award, which provides Princeton juniors with funds to pursue their senior thesis.

"Zoe Sims is the kind of student that one only encounters only once or twice in a long academic career — top scholar, varsity athlete, creative scientist and an outstanding human being," Pacala said.

"Zoe's scientific observations are invariably insightful, her energy for scientific work is inexhaustible and her optimism is relentless," he said. "Her work is cutting-edge and graduate-level. It has been an honor to be her adviser."

Ecology and environmental science tap into a deeper love and concern Sims has for nature, which she sees as imperiled by human activity and societal indifference, she said.

"I would attribute my interest in environmental studies to a fundamental love of natural systems and trying to understand them — both how they matter to people and our future, and because I believe in the innate value of nature," Sims said. "To me, there's also a sense of urgency that's drawn me to studying the natural world. It wouldn't feel right doing anything else when this issue I care about so deeply is so urgent." 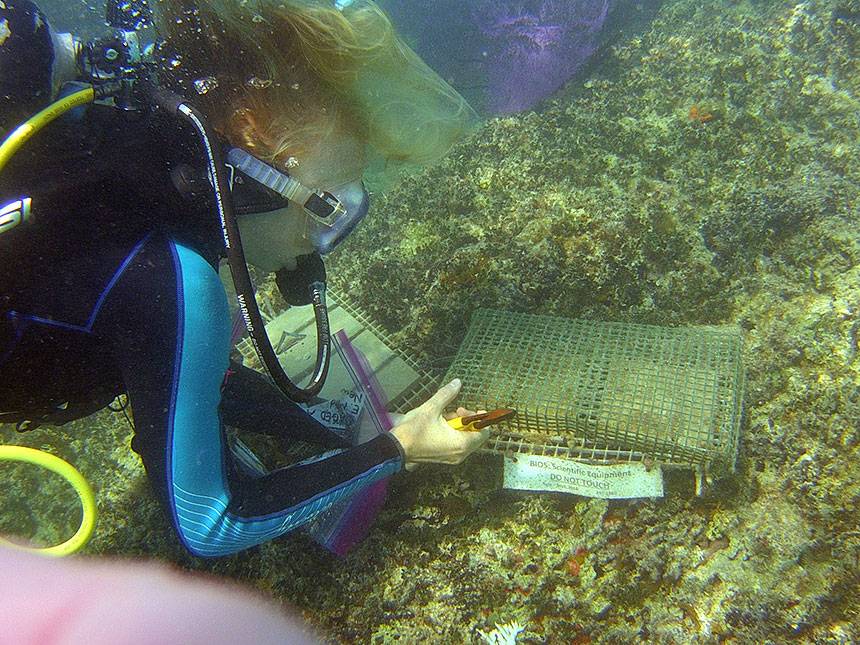 Sims conducted her senior-thesis research with support from the PEI Environmental Scholars Program, through which she was named a 2015 Newton Family Scholar. The award provides sophomores with up to $15,000 to support their research for two years. In the photo above, she is collecting a set of tiles that were used to experimentally quantify the effect of fish grazing on algae growth. She found that in seawater polluted with additional nitrogen, fish are critical to curtailing algae growth on coral.

Because of the global threats coral reefs face from carbon emissions and ocean acidification, Sims wanted to examine a problem — groundwater pollution — that could be remedied with local action. "Looking at local stressors in the context of global stressors is both hopeful and empowering," Sims said. "That innate optimism and applicability drew me to study local reef stressors."

Sims became fascinated by coral reefs growing up in her native Hawaii. "I always enjoyed being in water and around reefs," she said. "Coral reefs are part of how I got hooked on ecology. They are beautiful and they have a richness of biodiversity more akin to a rainforest than anywhere else on Earth."

Sims also knew the difficulties of studying an underwater system such as coral reefs — which made it all the more appealing. "There are challenges to studying marine systems and part of me really wanted to take those on," Sims said. "I'm kind of a challenge junkie — if you dangle a challenge in front of me, I'll take it."

Through the PEI Internship Program, Sims spent the summer after her first year at Princeton in the remote Costa Rican rainforest studying nutrient systems with Cleo Chou, a graduate student in ecology and evolutionary biology.

"Working conditions were difficult, uncomfortable and dangerous because of the fer-de-lance [Central American lancehead], the hemisphere's most deadly snake," said Pacala, who also is an adviser to Chou. "Cleo says that Zoe was the single most effective field biologist she ever met."

Sims is once again changing up ecosystems. In September, she'll begin a one-year fellowship through Princeton in Africa at the Mpala Research Centre, a multidisciplinary and multi-institutional field laboratory on a 50,000-acre reserve and ranch in central Kenya. PEI and Princeton have a long association with Mpala and the University recently became a managing partner of the research center.

After charting her own research course for two years, Sims is excited to take part in Mpala's many community outreach programs, such as its successful effort to vaccinate local dogs against rabies. "What I'm looking for now is more experience in collaborative and community-oriented work," she said. 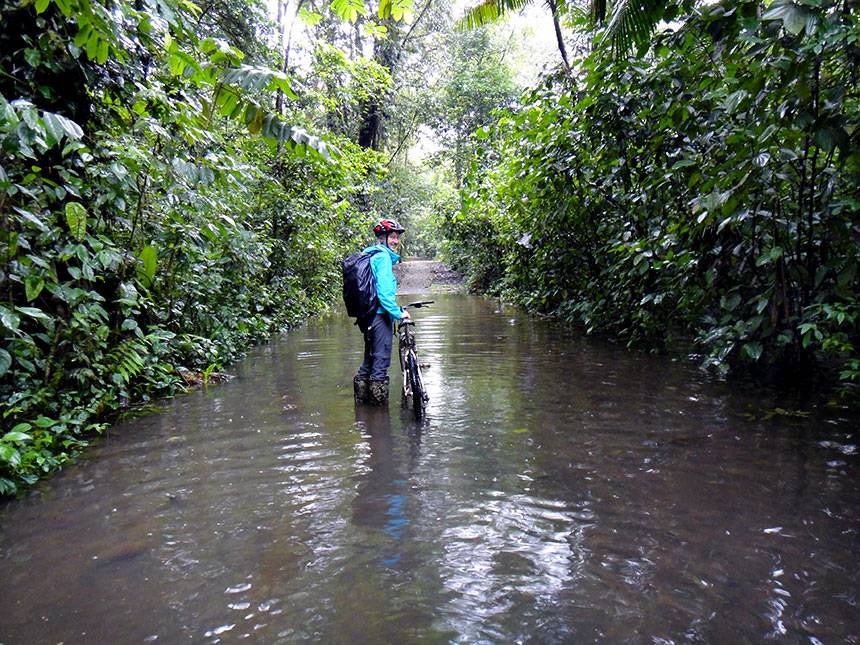 Sims is motivated by a love of the environment and overcoming the challenges of field work. Through the PEI Internship Program, Sims spent the summer after her first year at Princeton in the remote Costa Rican rainforest studying nutrient systems with Cleo Chou, a graduate student in ecology and evolutionary biology. In the photo above, Sims bikes to the field site in the La Selva Biological Station in Costa Rica during an especially rainy summer.

Photo by Cleo Chou, Department of Ecology and Evolutionary Biology

Sims also will write stories for the center's website and newsletter about the research going on at Mpala. "I'm really interested in science and nature writing — that's something I've tried to pursue along with research," she said.

"It's really important right now that as scientists we think harder about how to explain our work to people," Sims said. "Everyone in this field shares such a passion for nature and the environment, I think we can become insular and we don't know how to communicate what we learn.

"When you have to back-to-back years of record coral bleaching," she said, "how do you communicate that to people who have never seen coral?"