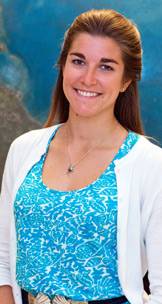 Elizabeth McKenna's senior thesis examines the delicate environmental balance of coral reefs. The Princeton ecology and evolutionary major conducted fieldwork in Bermuda last summer, where she investigated the ideal conditions for coral growth. Princeton has a research partnership with the Bermuda Institute of Ocean Sciences (BIOS) in St. George's. McKenna's research was funded by an award given annually by the Princeton Environmental Institute and the Department of Ecology and Evolutionary Biology to support field projects critical to the senior thesis.

For the past two years Elizabeth McKenna has been keenly aware — and concerned — that many of the world's coral reefs are in trouble. So when it came time to choose a senior thesis project, the Princeton University ecology and evolutionary biology major decided she was going to help play a role in figuring out solutions to this pressing problem.

"Coral reefs are one of the most diverse ecosystems on the planet, and maintaining those ecosystems is extremely important," McKenna said. "Not only is their biodiversity critical to aquatic ecosystems, but they're also important in terms of what they provide for humans, which includes everything from tourism and recreation to shoreline wave protection, fishing and even the discovery of new medicines."

The danger to coral comes in many forms, including pollution, global climate change, unsustainable fishing and ocean acidification from atmospheric carbon dioxide. Coral reefs also face a threat posed by an unlikely culprit — cruise ships. According to McKenna, cruise ship propellers often cause increased seafloor turbidity, resulting in sediment plumes that settle upon nearby coral, decreasing the amount of available sunlight and retarding their growth.

"Sediment isn't entirely bad for coral," McKenna said. "Yes, too much sediment can block sunlight and prevent coral from maturing. But just the right amount of sediment can cover the dead coral skeletons, promoting the framework of the reef, and allow juveniles to attach more securely to the reef." 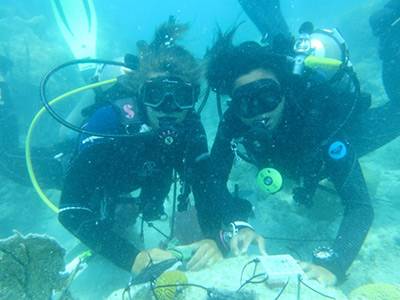 McKenna (left) and Princeton graduate student in ecology and evolutionary biology Lisa McManus set up equipment to research the effects of varying light and sedimentation conditions on the growth rates of juvenile coral. The experiment involved numerous dives, and McKenna now is certified as a scientific diver by the American Academy of Underwater Sciences. (Photo courtesy of Elizabeth McKenna)

To learn more about this delicate balance, McKenna embarked on an 11-week study last summer to research the effects of varying light and sedimentation conditions on the growth rates of juvenile corals at the Bermuda Institute of Ocean Sciences (BIOS) in St. George's, Bermuda. Princeton has an ongoing collaboration with BIOS in facilitating courses, student internships and senior thesis research opportunities.

Through fieldwork conducted between June and August, McKenna investigated the ideal conditions for coral growth, which she said could eventually have an impact on future coral protection and preservation.

"If the juveniles aren't growing, the reefs won't continue living," McKenna said. "The more we understand what they need to grow, the better prepared we are to enact policies that maintain those ideal conditions and promote healthy reefs."

McKenna became interested in coral during the summer of 2012 while working as an education intern at BIOS. She worked with students between the ages of 11 and 19 at a marine science camp called Waterstart, designing marine science curricula for Bermudian schools and piloting courses with the campers. McKenna took students scuba diving every day, enhancing her underwater skills while increasing her passion for coral protection. 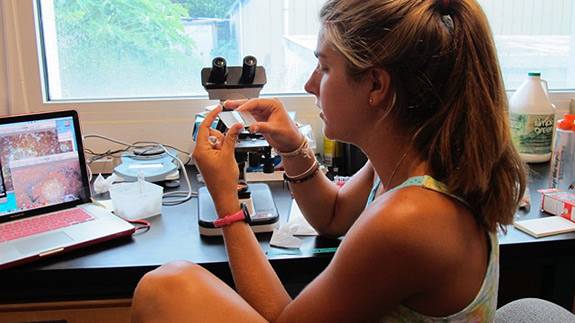 McKenna became interested in coral during the summer of 2012 while working as an education intern at BIOS. Above, she prepares slides to present to a group of teenagers at Waterstart, the marine science camp at BIOS. (Photo courtesy of Elizabeth McKenna)

In the fall of 2012 she learned about ecosystem services — how humankind benefits from the workings of natural ecosystems — and their valuation in junior seminars given by Simon Levin, the George M. Moffett Professor of Biology. The work inspired her junior paper on the ecosystem services of coral reefs, and Levin became her senior thesis adviser.

"When she first approached me about her thesis I was struck by how much passion Beth had for the questions she wanted to explore," said Levin, who was awarded the 2014 Tyler Prize for Environmental Achievement in March. "I think she took on a very ambitious and important project, and I felt as though it could be a valuable contribution to this overall discussion, and hopefully a step toward preserving coral reefs in the future."

McKenna embarked on a complex and physically taxing series of experiments that were funded by the Becky Colvin '95 Memorial Award, presented annually by the Princeton Environmental Institute (PEI) and the Department of Ecology and Evolutionary Biology to support field research projects critical to the senior thesis. 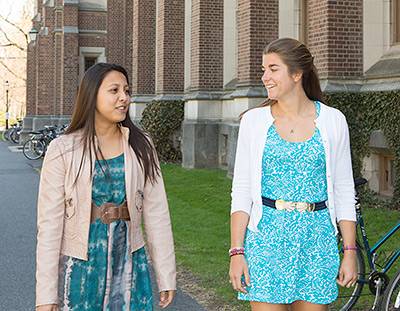 Back on the Princeton campus, McManus (left) and McKenna catch up outside Guyot Hall. (Photo by Denise Applewhite, Office of Communications)

McKenna's work started last June with the collection of adult coral samples at a site called Hog Reef. Over several days, McKenna — along with other BIOS researchers, including Princeton ecology and evolutionary biology graduate student Lisa McManus — embarked on numerous dives during one day and chiseled off 20 small coral colonies, transferring each into a bag for transportation to the BIOS lab. Once there, the adult corals were placed into 12 containers on a wet bench where they began spawning larvae.

After several days, the researchers collected the coral larvae to place into plastic containers with 29 terracotta tiles for settlement. The tiles, 2.5 centimeters by 2.5 centimeters, had been conditioned to a realistic settlement environment after being affixed to a reef for six weeks prior to the study. After several days of settlement McKenna and her colleagues chose 21 tiles that had at least six settled coral larvae on one tile face for experimentation. Excess settled larvae were scraped off.

"This is when the fieldwork became really intense," McKenna said. "We were in for a lot of diving."

Once the larvae had settled onto their respective tiles and were photographed, McKenna traveled by boat with four other divers to a reef just outside of Whalebone Bay. Each tile was cemented to the reef with underwater epoxy and given one of three "treatments" — no shade, one shade or three shades. Treatments consisted of square plastic frames with either no shades attached, or with one or three pieces of window screening attached. These treatments — which were secured a few centimeters above the tiles with nails and zip ties — represented varying degrees of shading that could impact the growth of the fledgling coral. 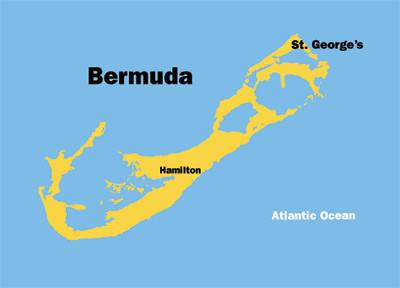 Studying Bermuda's coral reefs has deepened McKenna's environmental commitment. She said ... "if we're not always striving to better understand marine ecosystems, we're missing out on more than half of what makes our planet thrive."

Finally, to construct the sediment traps, McKenna and her fellow divers hammered three pieces of reinforcing bar into the reef and then zip-tied traps that corresponded to the respective shade treatment type.

The work enabled McKenna to train in science diving, certifying her as an American Academy of Underwater Sciences scientific diver. "This kind of diving was a very different experience for me," McKenna said. "I had a lot of diving experience from my previous summer, but that was mostly recreational. Getting used to working in an experimental environment underwater was challenging but also fascinating. Every time we went down we encountered different variables."

Three weeks later, McKenna and the other divers removed all the treatments and tiles, and brought them back to BIOS. Each tile was photographed and observed under a microscope, which allowed McKenna to calculate the growth rate of each sample while also noting the impact of their respective shade and sediment treatments.

"What really excited me about this was the opportunity to do more than just an observational study and instead actually conduct an experiment," McKenna said. "It's fascinating when you have a chance to alter the environment to learn more about what they (corals) need to thrive."

When it came time to analyze her data, McKenna realized there was a problem. When they first collected the adult coral samples in June, McKenna and her colleagues expected them to spawn immediately. But the process took longer than anticipated. Instead of leaving the larvae tiles underwater for six weeks, they had to settle for just three, "and that wasn't long enough for the treatments to have a significant effect on their growth," she said.

Nonetheless, McKenna said the principles behind her study — and those she would like to conduct in the future — are critical to investigating the larger problem of threatened coral around the world.

"Even though the results weren't 'technically' significant, the experiment itself was a good beginning and set up for further research into the ideal conditions for juvenile growth," McKenna said.

After graduation, McKenna will spend several months leading diving trips for American high school students in Belize. She would like to take another year or two to conduct coral research, potentially at BIOS or another research station, before applying to medical school and possibly embarking on a career in pediatrics.

"I just hope my research, in some way, helps underscore how important these types of studies are," McKenna said. "More than 70 percent of the world is covered in water, and if we're not always striving to better understand marine ecosystems, we're missing out on more than half of what makes our planet thrive." 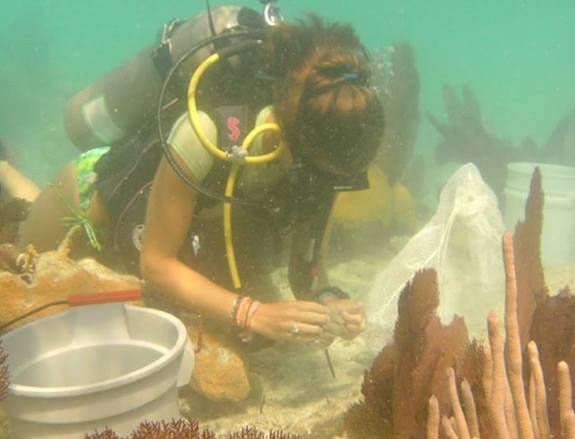 McKenna cements an adult coral back to the reef. (Photo courtesy of Elizabeth McKenna)