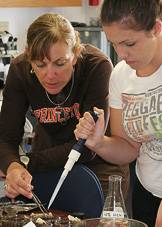 Eileen Zerba (left), the instructor of "Signals, Yardsticks and Tipping Points of Global Warming," helped freshman Laura Fernandez identify and prepare algae samples. Students in the freshman seminar took a fall break trip to Bermuda, enabling them to get a firsthand look at how climate change is expected to affect ocean systems.

Eileen Zerba (left), the instructor of "Signals, Yardsticks and Tipping Points of Global Warming," helped freshman Laura Fernandez identify and prepare algae samples. Students in the freshman seminar took a fall break trip to Bermuda, enabling them to get a firsthand look at how climate change is expected to affect ocean systems.

At left: The students observed and classified coral, fish, algae and other biodiversity within delineated grids while snorkeling along reefs.

Seminars set the tone for freshmen In their first semester as Princeton students, freshmen this fall have been exploring issues of identity through movement and dance, evaluating truth in historical texts and examining the impact of global warming through fieldwork in the waters of Bermuda. These are among the array of topics covered in this year’s Freshman Seminar Program. The seminars stress close interaction with faculty members in small-group settings and an emphasis on inquiry that will set the course for the students’ years at Princeton. The 75 seminars being offered this fall and spring are expected to enroll some 1,000 freshmen, including a number who have signed up for both semesters. Almost universally, students say that their freshman seminar was one of their best academic experiences at Princeton and was the catalyst for some of their most enduring intellectual friendships with fellow students. Each seminar is hosted by a residential college. Class discussions often continue in informal settings both on and off campus, through meals, guest lectures, field trips and other activities. The Dec. 10 issue of the Princeton Weekly Bulletin includes stories on three of this fall’s freshman seminars.

Snorkeling practice in DeNunzio Pool may be an unusual activity for a freshman seminar, unless the class is going to the Sargasso Sea.

Over fall break, 12 freshmen in the seminar "Signals, Yardsticks and Tipping Points of Global Warming" went to Bermuda to get a firsthand look at how climate change is expected to affect ocean systems. The trip allowed students to practice environmental science in the field and gather data they now are busy analyzing and writing up as a journal research paper.

"I was thrilled by the idea of snorkeling for lab," said freshman Hannah Barkley, who intends to major in ecology and evolutionary biology.

The seminar is being led by Eileen Zerba, a lecturer in ecology and evolutionary biology and the director of undergraduate laboratories at the Princeton Environmental Institute (PEI). Designated as the Shelly and Michael Kassen '76 Freshman Seminar in the Life Sciences, the seminar is fully funded by the Kassen family and PEI.

For the Bermuda trip, Zerba designed a research project involving field and laboratory hands-on exercises to complement the activities on campus. The seminar includes lectures, class readings, discussions, group problem-solving projects and presentations, as well as film screenings on issues such as climate drivers of global warming, interconnections between the atmosphere and ocean, melting of continental ice caps and glaciers, and rising sea levels.

"The freshman seminar format offers a way to be creative and to get students excited about college," Zerba said. "Through this seminar they examine a special area of environmental science and learn problem-solving skills that they can take to their disciplines."

The seminar dovetails with a larger initiative at Princeton — known as the Grand Challenges Program — to offer experiential learning courses that share dominant environmental, political, social and engineering dimensions. Zerba said that Stephen Pacala, the Frederick D. Petrie Professor in Ecology and Evolutionary Biology and director of PEI, encouraged her to develop the seminar. Pacala is a driving force behind the Grand Challenges initiative and a frequent collaborator with Robert Socolow, professor of mechanical and aerospace engineering and an associated faculty member with PEI, who visited the seminar to tell students about his work that focuses on controlling carbon emissions.

Many of the freshmen who selected the seminar mentioned their interest in discovering for themselves the reality of global warming, which is surrounded by so much conflicting media hype.

"I was interested in taking this seminar because global warming is obviously one of the most prominent issues of our generation, yet I felt like I had such little exposure to the true science behind the theory," said freshman Matthew Salesi, who is considering majoring in molecular biology.

The students delved into learning about how future global warming could lead to long-term degradation or disappearance of many coral reefs by conducting a weeklong research project on coral bleaching at the Bermuda Institute of Ocean Sciences (BIOS). The project was organized by Zerba in collaboration with scientists at BIOS, most notably Alex Amat, a marine science specialist for the Bermuda Ministry of Education, as well as Samantha de Putron and Ross Jones, associate research scientists. Princeton has an established partnership with BIOS, where four-week environmental science courses in geosciences and in ecology and evolutionary biology are offered in the summer. Joining Zerba from Princeton were Julie Viehweg, a doctoral student in chemistry, and Karen Kimm, a lab technician at PEI.

At BIOS, the freshmen studied the effects that elevating temperature and light have on yellow pencil coral, which is abundant in the coral reefs of Bermuda.

Freshman Jack Ackerman described their lab work: "In our lab, we subjected healthy samples of coral to conditions typically caused by global warming, particularly rising water temperatures. I found it surprising that it only took a very small rise in temperature to harm the coral specimens. Even with a rise of just a few degrees, many of our coral began to bleach and die."

Ackerman is interested in learning more about environmental policy and how governments respond to global warming issues as he continues his studies, perhaps as a major in politics or in the Woodrow Wilson School of Public and International Affairs.

The lab work at BIOS emphasized methods for monitoring the health of coral reef communities used by researchers in the field, while teaching about the ocean environment. These lessons included observing and classifying the coral, fish, algae and other biodiversity within delineated grids while snorkeling along reefs measured out by the scuba divers, Amat and Viehweg.

"It was so neat to see all the amazing colors of the reefs and the fish and to recognize the different things we had learned about," said freshman Laura Fernandez.

Working from a float, some students used a probe on a 50-meter cable to measure various parameters of the water surrounding the reefs, such as temperature, pH and dissolved oxygen, to evaluate whether different conditions influence fish and coral community diversity and health.

Zerba ensured that the Bermuda trip schedule left time for the students to have fun. The Princeton group was especially fortunate in being able to observe the annual mating ritual of the bioluminescent fireworm, which takes place on the ocean's surface three days after a full moon. The students also had opportunities to explore various parts of the island; one highlight was snorkeling in caves in a nature reserve.

"With our snorkels and underwater lights we could see spiny lobsters on the cave floor," said Salesi. "It was really beautiful, and I probably won't get to see anything like it again for a long time." 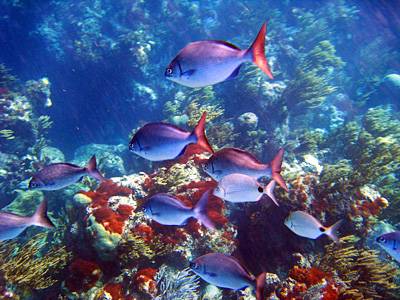