History can tell us a lot about environmental upheaval, say Princeton historians John Haldon and Lee Mordechai. What is missing in today's debate about climate change is using what we know about how past societies handled environmental stresses to help inform our own situation.

From left: Three of the co-authors on the new paper, 2017 Princeton Ph.D. graduate Lee Mordechai, Georgetown University’s Tim Newfield, and Princeton’s John Haldon discuss research questions at the May 2017 Climate Change and History Research Initiative colloquium. Haldon created CCHRI to bring historians into dialogue with climate change researchers and archaeologists, to bring nuance to the discussion of how societies react to environmental stress.

Ours is not the first society to be confronted by environmental change, Haldon, Mordechai and an international team of co-authors noted in a paper published in the current issue of the Proceedings of the National Academy of Sciences. Over the course of history, some societies have been destroyed by natural disasters, like the eruption of Pompeii, while others have learned how to accommodate floods, droughts, volcanic eruptions and other natural hazards.

The key is “how a society plans for and interacts with the stress from nature,” said Mordechai, who earned his Ph.D. in history from Princeton in 2017. He cautioned that policymakers looking at how to prepare for global climate change “should understand that it is not going to be a short-term process. It will take time. We, collectively, as a society, need to prepare for these things in advance. 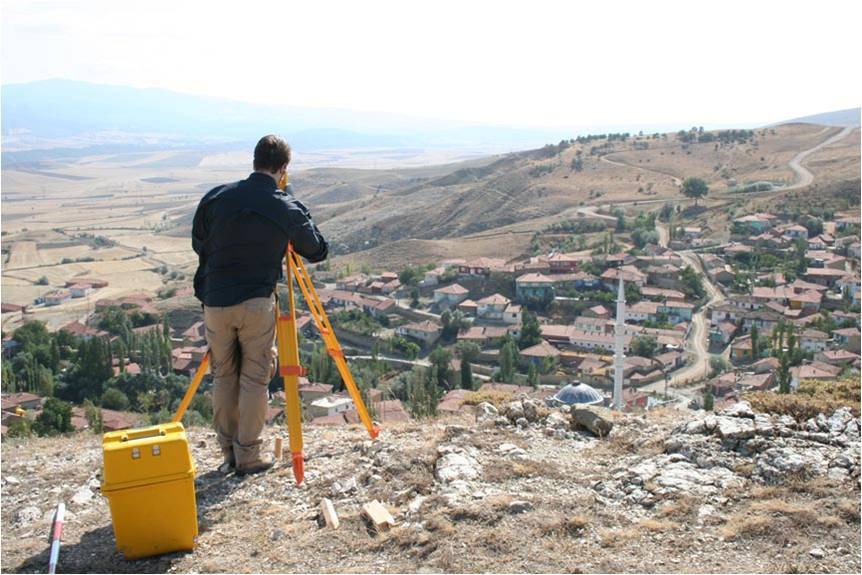 “Human societies are much more resilient, much more adaptive to change than we would expect,” he said. He pointed out that many societies developed precisely in locations where the environment was difficult to control, such as the flood basins of the Nile and Euphrates rivers or earthquake-prone areas like Constantinople (now Istanbul).

Similar catastrophic natural events can play out very differently, Mordechai said, depending on how well prepared its society is to handle the occurrence and its aftermath. “In 2010, there were two very similar earthquakes: one in Christchurch, New Zealand, and the other in Port au Prince, Haiti,” he said. “The Haiti earthquake killed anywhere between 46,000 and 316,000 people. The Christchurch earthquake, at the same magnitude, killed one person. And it’s actually debatable [if that is what] killed him or not.”

The differences in the outcomes in Haiti and in New Zealand highlight the host of factors that come into play when examining the connection between a society and its environment. Too often, researchers will spot a correlation between the climate record and the historical record and leap to a too-simple conclusion, said Haldon, the Shelby Cullom Davis '30 Professor of European History and a professor of history and Hellenic studies.

In their article, Haldon and his co-authors looked at four case studies to examine some of the ways societies have and have not coped with natural stresses: the Mediterranean in the Early Middle Ages (600-900), Europe during the Carolingian Era (750-950), Central America in the Classic Period (650-900) and Poland during the Little Ice Age (1340-1700).

In each case, they showed how a simple, environmental interpretation of events overlooked the key context. “If I would have to summarize what history has to contribute: it adds nuance to our interpretation of past events,” said Mordechai.

In the case of the Mayans in Caracol, Belize, for example, the authors noted that before its apparent collapse, Mayan society had withstood some 2,000 years of climate variations in a challenging environment. Other authors have suggested that a severe drought ended the civilization, but Haldon’s research team correlated archaeological data, written hieroglyphic history and the projected drought cycles and found that the community actually expanded after each drought.

So what else could be responsible for the abrupt end to the massive city? The researchers saw that after a century of warfare, Caracol’s elite had adjusted long-standing economic and social policies to widen the divide between themselves and the commoners. The research team concluded that socioeconomic factors, accompanied by warfare, were more responsible for the city’s abrupt demise than drought. 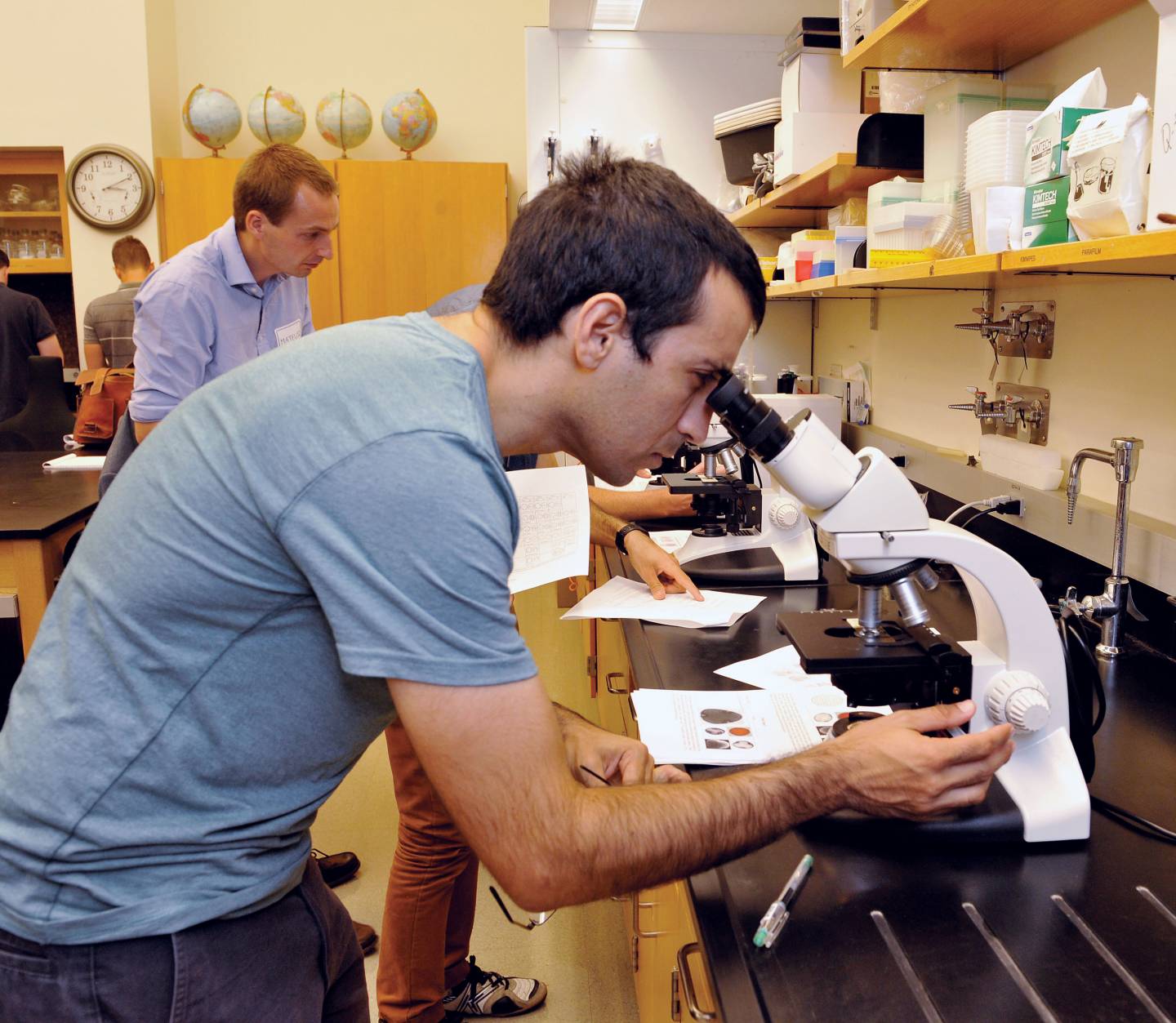 Mordechai examines pollen grains at a CCHRI palynology workshop in 2016, where historians learned how to use pollen data in their own research.

Economic inequality is nothing new, said Mordechai, who is now a Byzantine studies postdoctoral fellow at the University of Notre Dame. “You find this over and over again,” he said. “Disasters serve, in a way, to emphasize differences in our human society. [After a hazardous event], rich people suffer less. You see that all over the place.”

In this and their other three case studies, the researchers argued that historians have a vital contribution to make to conversations between archaeologists and climate scientists, because written documents can unlock what they call the “cultural logic” of a society: how people understand what is happening, which in turn determines how they respond to it.

Historians bring “nuance to the search for ‘tipping points,’” said Monica Green, a history professor at Arizona State University and a 1985 Ph.D. graduate of Princeton who was not involved in this research. “We want to know which straw broke the camel’s back. But sometimes, we realize that the answer lies not in identifying a specific straw, but something about the camel or the ambient environment.”

Others have also called for this convergence of history with science, but Haldon’s group is the first to show exactly what that might look like, said Carrie Hritz, associate director of research for the National Socio-Environmental Synthesis Center in Annapolis, Maryland, who was not involved in this research. “Past work has centered around calls for integration with somewhat vague statements about how history and archaeological data can be relevant to current studies of the human dimensions of climate change. This paper is unique in that it [provides] detailed examples that link these data to current topics.”

In recent years, archaeologists have begun incorporating scientific data sets — such as pollen deposits that reveal crop choices and tree rings that reflect good and bad growing seasons — even as biologists have started writing history books that argue for “environmental determinism,” the idea that natural events often determine the course of societies.

Neither side has the whole story, said Haldon, who is also an associated faculty member with the Princeton Environmental Institute and the director of the Sharmin and Bijan Mossavar-Rahmani Center for Iran and Persian Gulf Studies at Princeton.

“There’s a danger that we perceived that historians who didn’t understand the methodologies and problems of the sciences could easily misuse the science," Haldon said. "And we also saw that the same problem works the other way around. Scientists don’t really understand how social scientists work and why we ask the questions we ask, so they’re often in danger of misusing history and archaeology.” 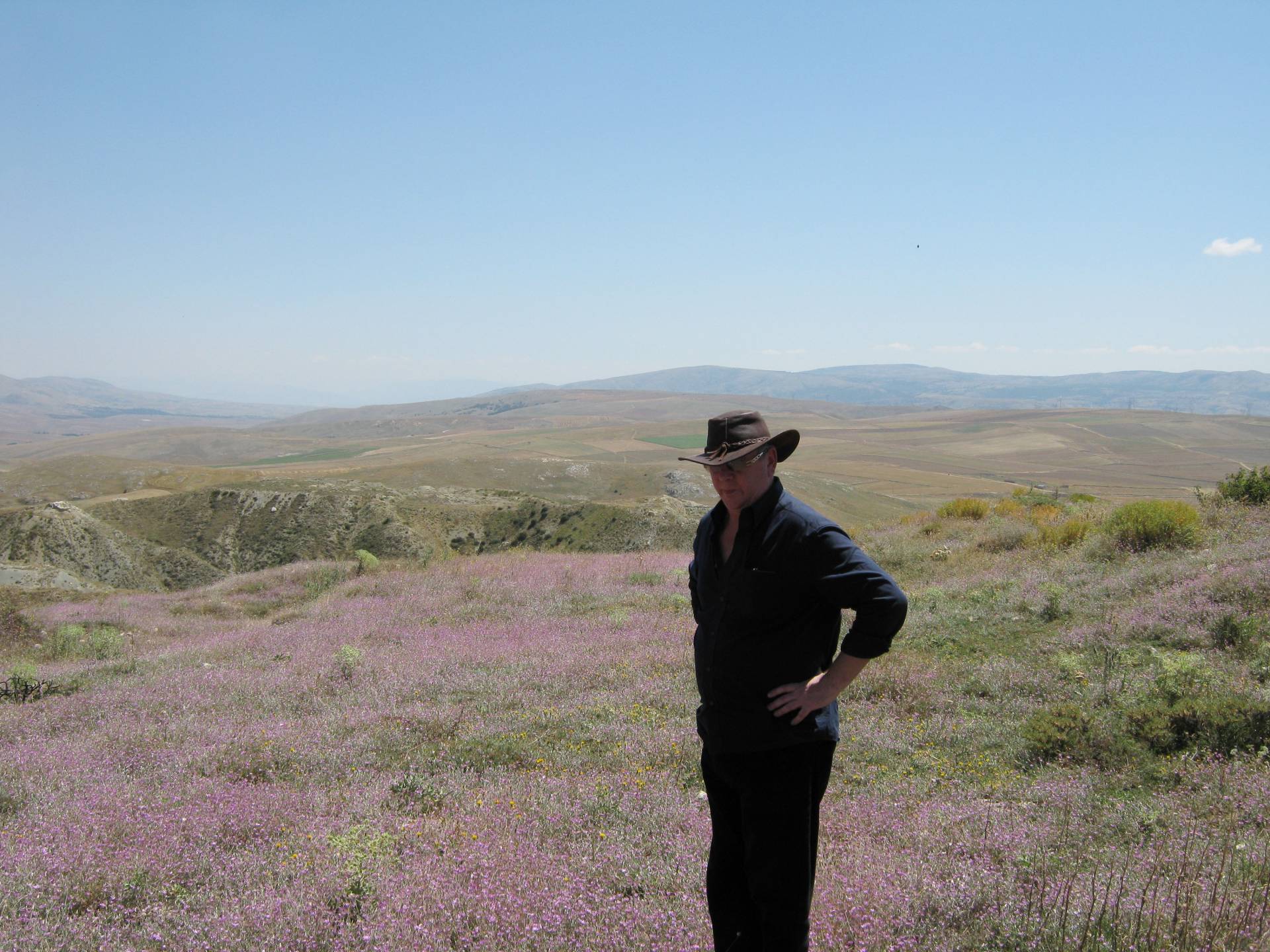 Haldon, project director of the Avkat Archaeological Project in Turkey and director of CCHRI, stands in the remains of a Byzantine citadel on a Turkish hillside.

Since 2013, its collaborators have addressed the question of “how do we get scientists and social scientists to work together and not misunderstand each other or misuse each other’s work?” by creating cross-disciplinary research teams that pose and tackle research questions together.

After several years of semiannual, face-to-face group meetings with a growing set of researchers, “we knew we were doing something that nobody else does, but we hadn’t thought of how to publicize what we were doing other than through the regular social science approach of writing rather long, boring articles and publishing them in journals nobody reads,” said Haldon with a chuckle.

At the suggestion of one of their science collaborators, Haldon and Mordechai distilled their research into a paper for the scientific community.

“The paper is of extremely high importance, because it addresses the lack of true interdisciplinary research in the field of historical environmental studies,” said Sabine Ladstätter, director of the Austrian Archaeological Institute, who was not involved in the research. “Complex historical phenomena are currently often discussed without historians in the scientific community as well as in public. This situation in turn leads to simplifying explanatory models, that do not withstand a critical evaluation by historians. The required cooperation between historians, archaeologists and natural scientists (in this case paleo-environmental sciences) is to be welcomed and urgently needed.”

If he could leave policymakers with one key piece of advice, said Haldon, he would urge them to resist simplistic conclusions and easy explanations:

“We’re trying to explain how societies can respond in differently resilient ways to stresses and strains, and therefore, it’s not that climate and environment don’t have a direct impact on society, but rather that the way in which societies respond is often very different, and what is catastrophic for one society might be perfectly well-managed by another one, right next door.”

"History meets palaeoscience: Consilience and collaboration in studying past societal responses to environmental change," by John Haldon, Lee Mordechai, Timothy Newfield, Arlen Chase, Adam Izdebski, Piotr Guzowski, Inga Labuhn and Neil Roberts was published March 12 in the Proceedings of the National Academy of Sciences. The research was supported by the Princeton Institute for International and Regional Studies' Climate Change and History Research Initiative, Poland’s National Programme for the Development of the Humanities, and the Georgetown Environmental Initiative.