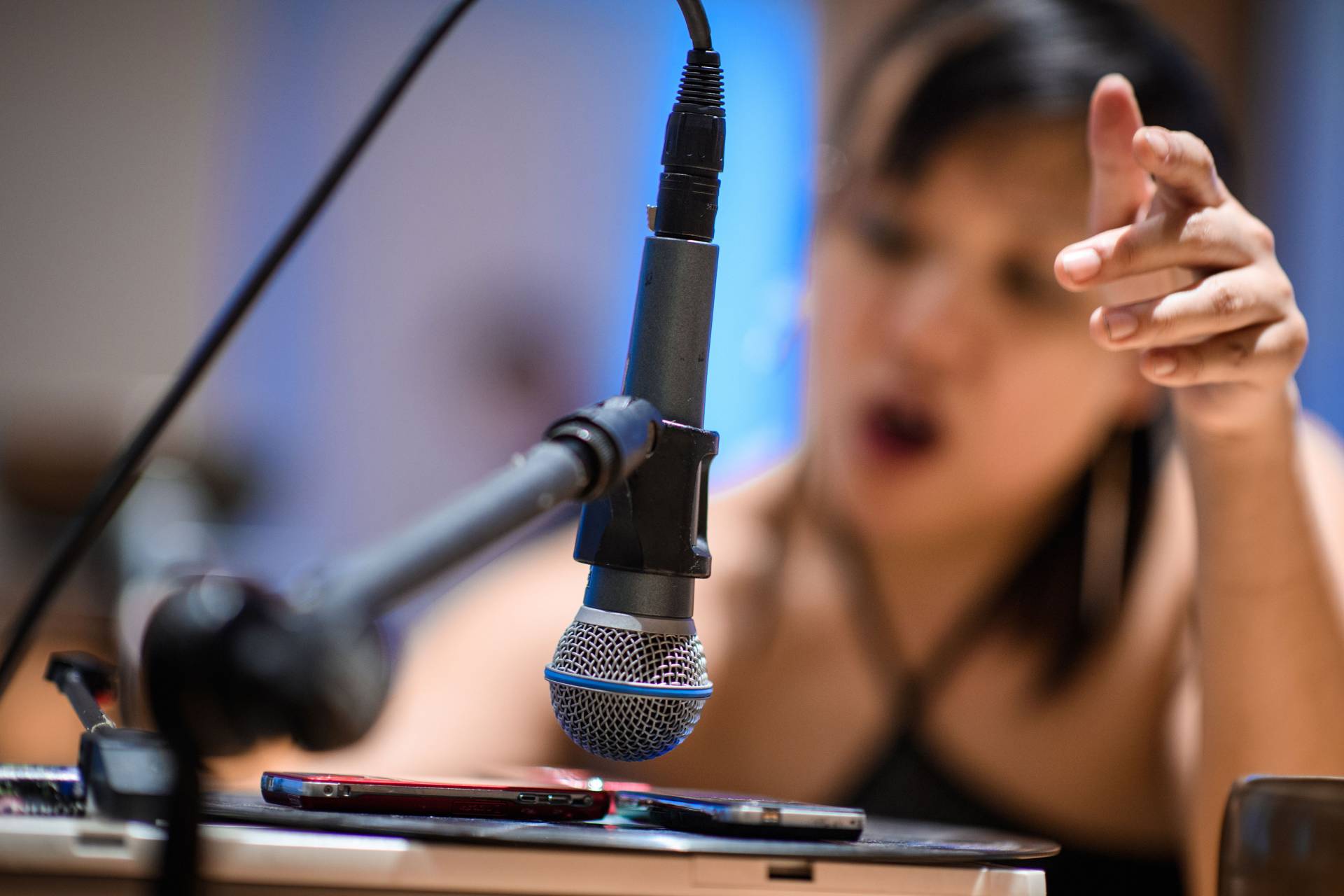 Vocalist and multi-instrumentalist Bora Yoon, a graduate student in composition, performs during the 2018 “Living at the Intersection Symposium,” which featured discussions on collaboration at the intersection of engineering and the arts.

The Council on Science and Technology’s "Living at the Intersection Symposium" at Princeton stoked a lively conversation among participants on the process of and opportunities for collaborating at the intersection of art and engineering.

In her welcoming address, council director Naomi Leonard called on audience members to seek “new, refreshing ways of thinking and doing.” She said that Princeton University was ripe for collaboration and that faculty members and students should feel empowered to act as both engineers and artists. 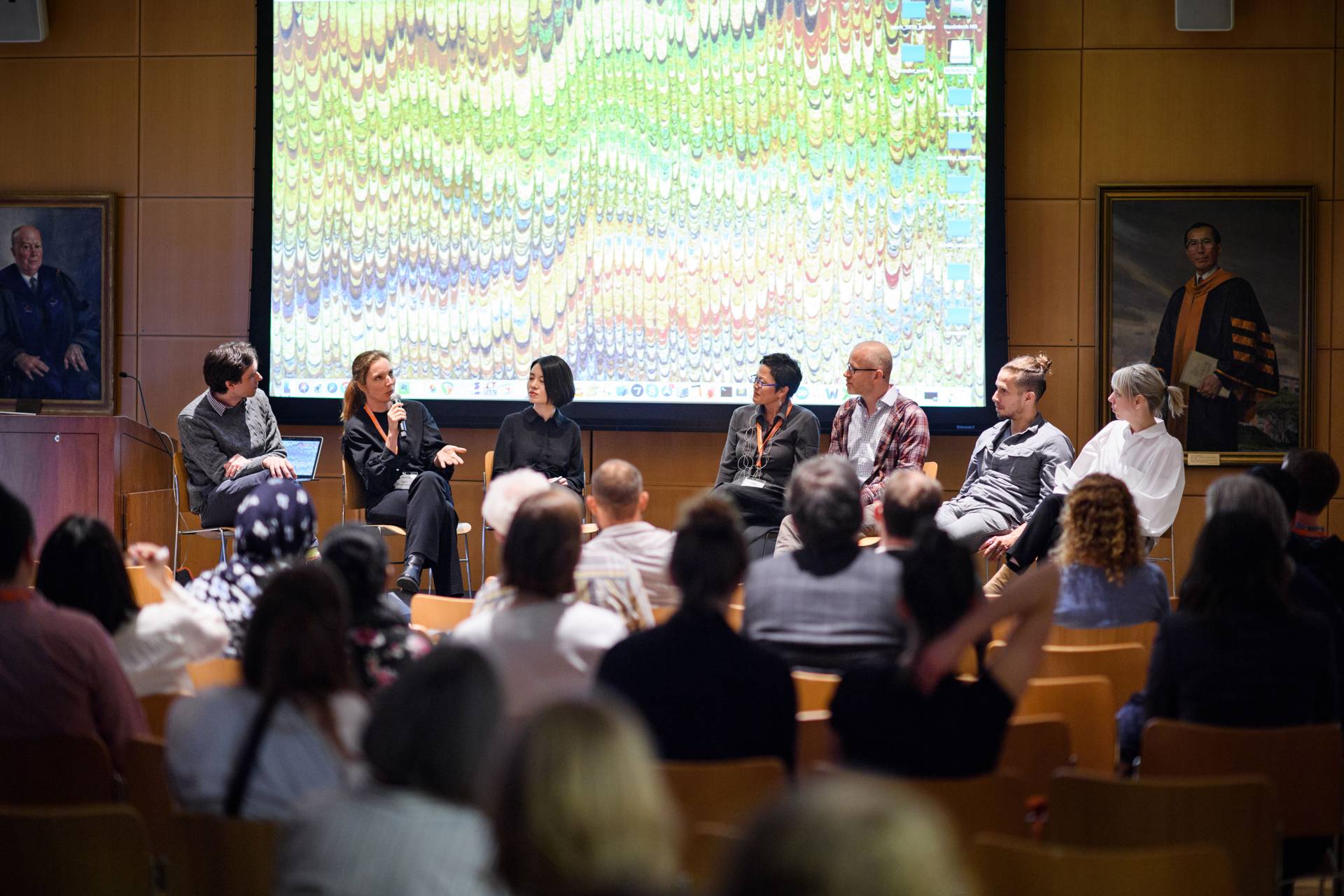 Panelists discuss the concepts of form and function.

In the opening discussion, titled "Asking Questions," the moderators, Professor of Visual Arts Jeff Whetstone and Lecturer in Dance Aynsley Vandenbroucke, both in the Lewis Center for the Arts, asked the panelists to deliver opening remarks using only questions.

"How do I move through space?" asked Amy LaViers, a 2009 alumna, now an assistant professor of mechanical science and engineering at the University of Illinois at Urbana-Champaign. "How do I quantify different styles of movement? What choices do I have in my movement? How do I enrich an impoverished movement vocabulary? How do I share movement instructions with others?"

LaViers, who earned a certificate in theater and dance along with her major in mechanical and aerospace engineering at Princeton, now focuses her research on combining choreography and robotics. "Why is prescribing complex movements so difficult, even for the simplest robots?" LaViers asked. "How do I bring movement to the foreground, especially for engineers, roboticists and scientists?" 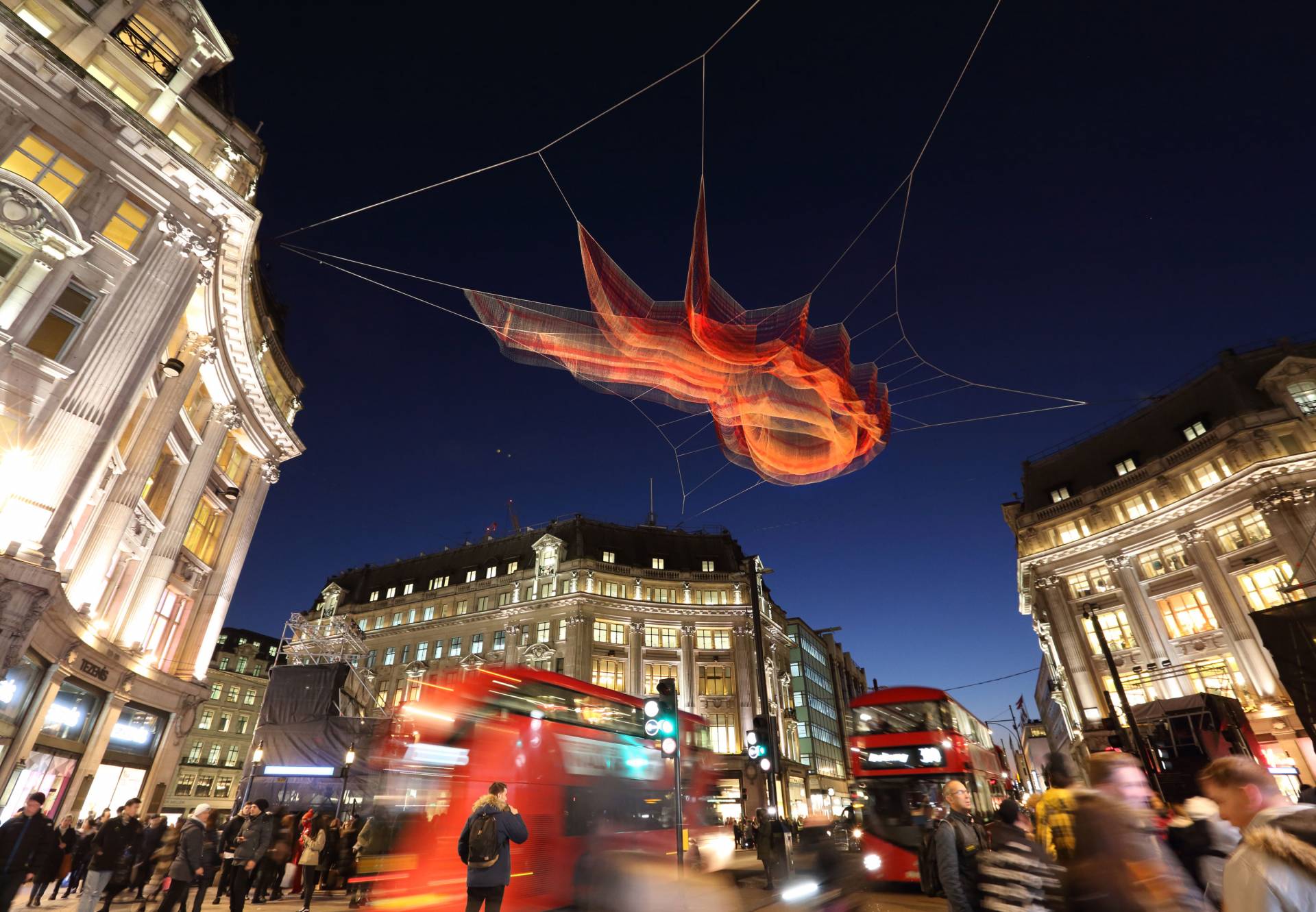 "1.8 London," by keynote speaker Janet Echelman, was displayed at London’s Oxford Circus in 2016.

In the keynote address, artist Janet Echelman said that “experimentation is how I keep myself excited to continue to go into work.” Echelman works in many forms, such as using fishing nets and water particles, and has created cloudlike works that fill public spaces in cities around the world. In her work "1.8 London," displayed during the 2016 Lumiere London light festival, the public was able to use smartphones to change the color of the sculpture. Because her art is often a demanding engineering problem as well as an artistic expression, Echelman immerses herself in ancient and modern technology in preparation for her pieces.

“How can I bring an idea to the central focus of a work?” she asked. “How can I express meaning in the form?” 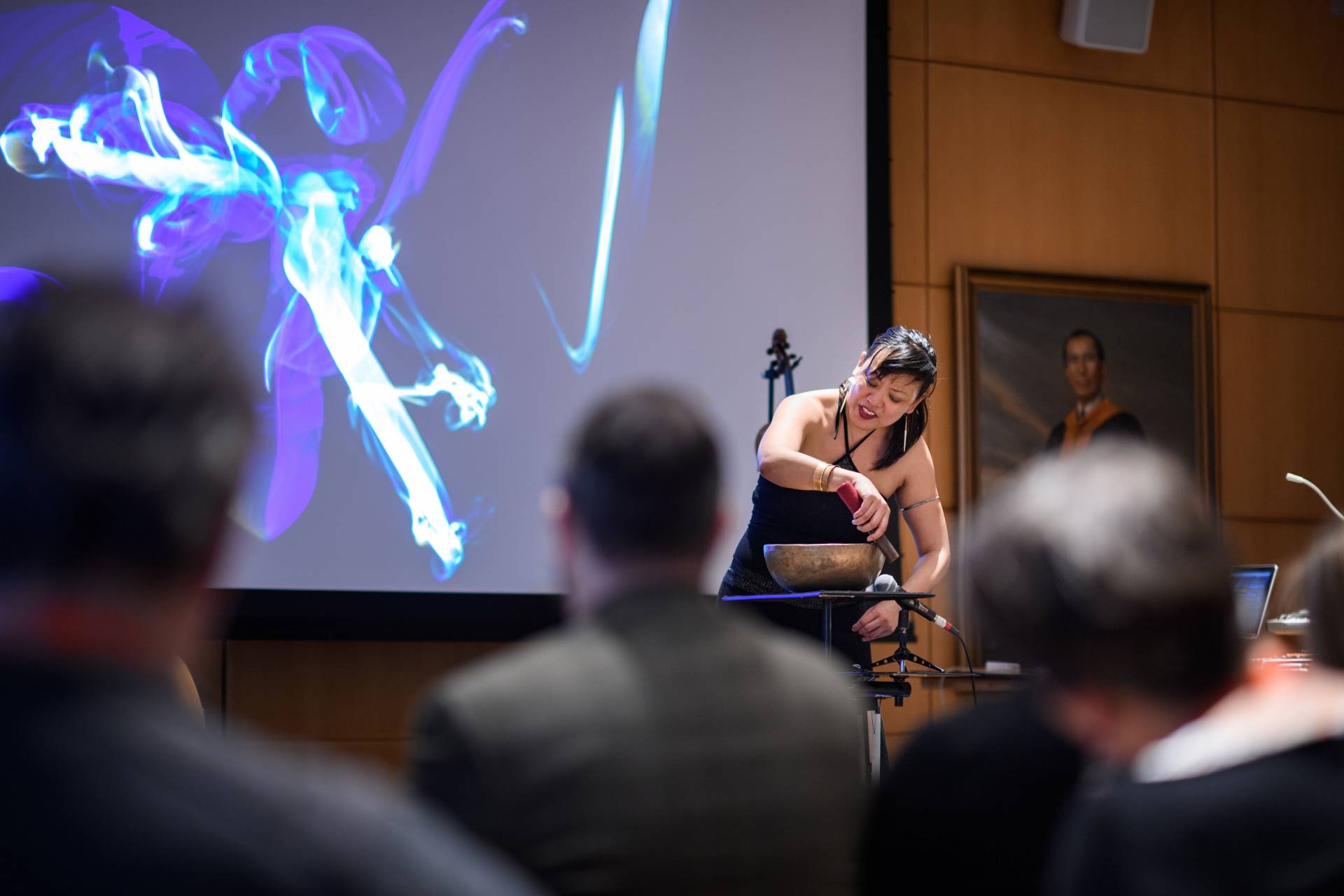 Bora Yoon, a graduate student in composition, performed "Visual Music," her collaboration with Joshua Ott, a software designer and graphics artist. Yoon, a vocalist and multi-instrumentalist, weaved her voice among violin notes, bell tones, keyboard riffs and recorded sounds to create a sonic counterpoint to swirling images that Ott sketched on a display that stretched across the stage. 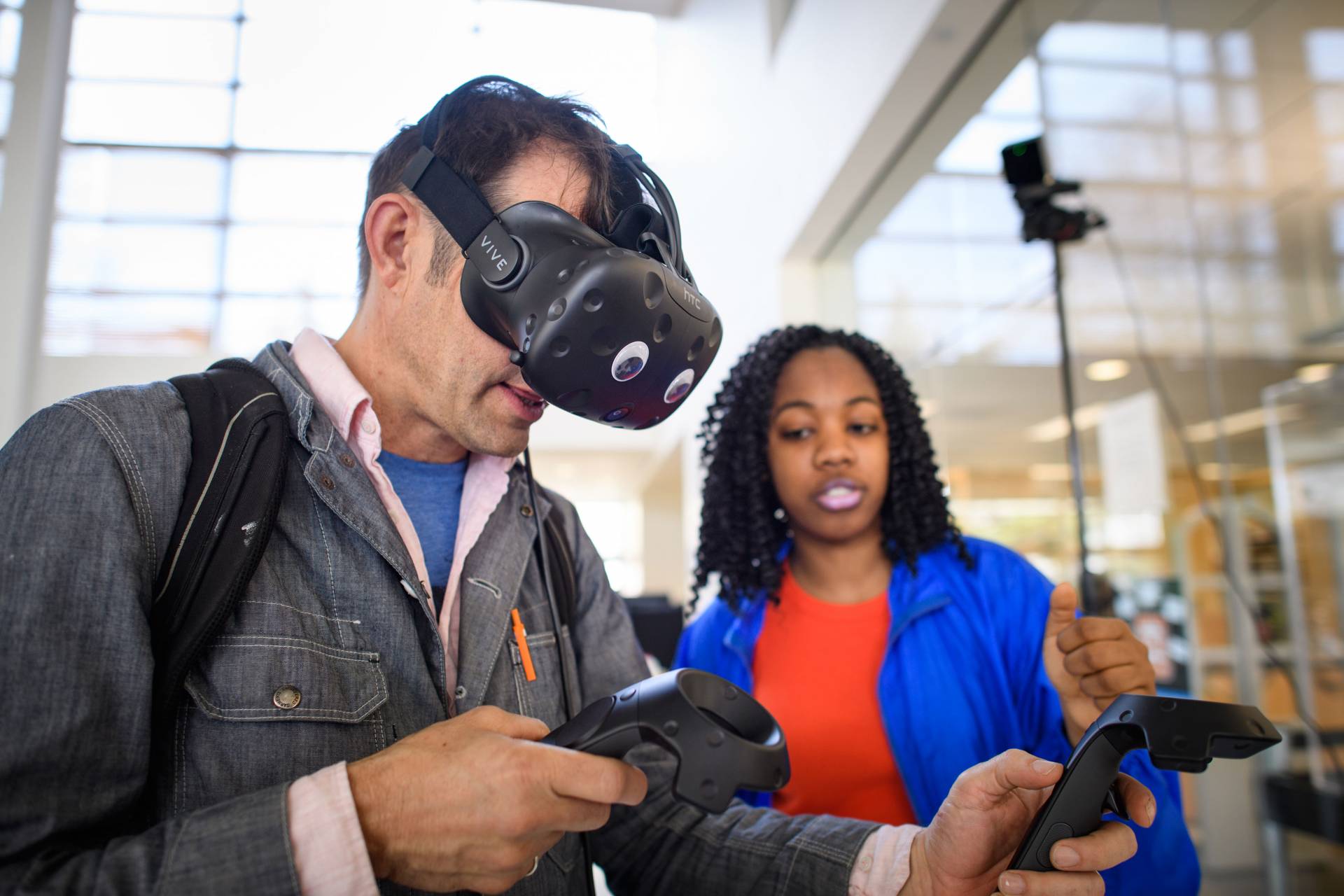 Jeff Whetstone, left, a professor of visual arts in the Lewis Center for the Arts, visits the “Creativity and Drawing in Virtual and Augmented Reality” interaction station where Mariah Wilson, a senior majoring in comparative literature, is working.

Attendees were encouraged to participate at several interactive stations between panel discussions. For those interested in exploring the higher reaches of technology, one station offered the chance to create art in virtual reality. At the other end of the technical scale, participants used markers, rubber bands and paper cups to build Scribble-Doodle-Draw Bots, which created drawings when activated by a motor with an offset weight. Attendees were given scratch pads and asked to write what living at the intersection of engineering and the arts meant to them. Participants then stuck the notes to boards placed around the Friend Center. 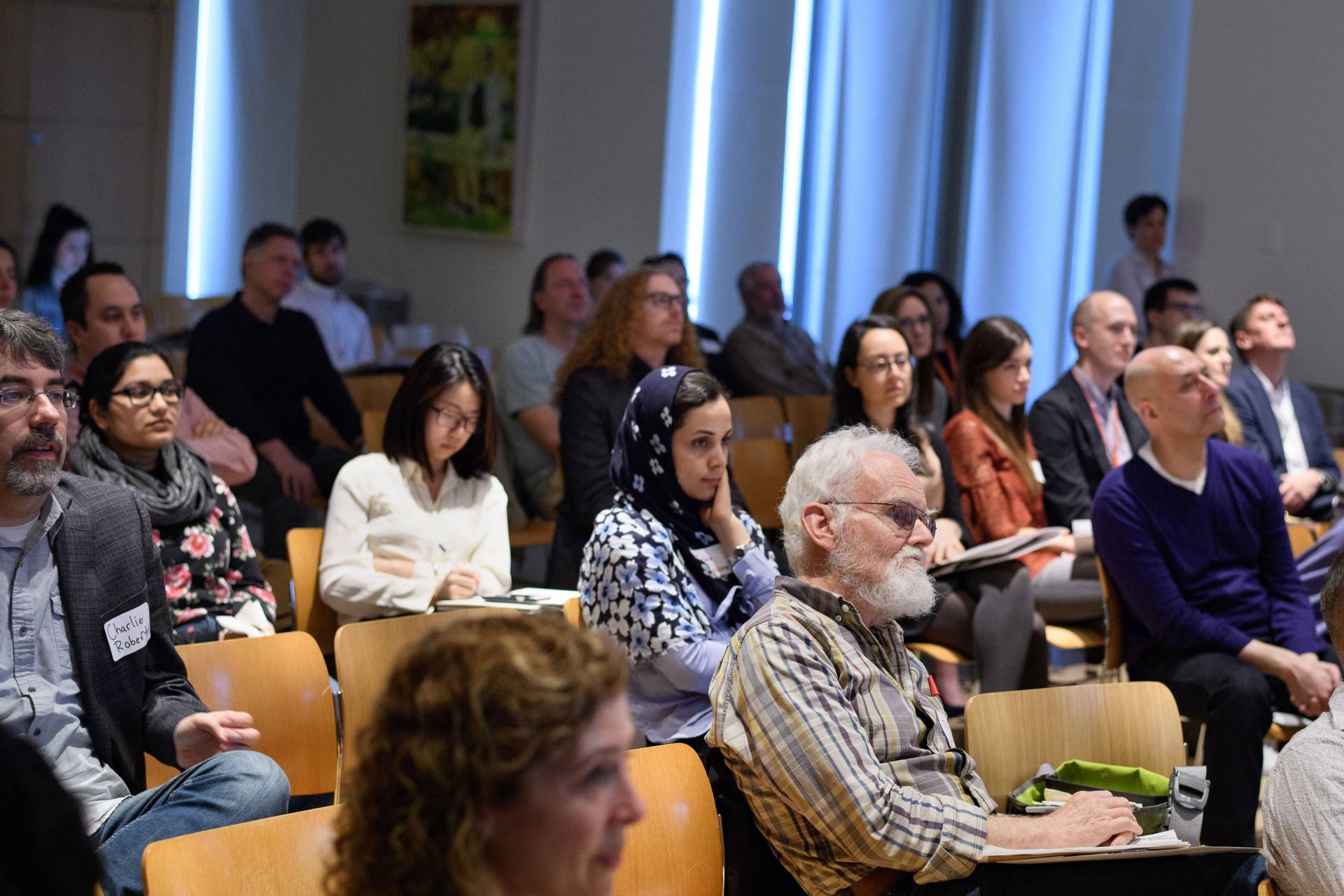 Audience members attend the symposium in the Friend Center. The series seeks to foster engagement at the intersection of the sciences, engineering, the humanities, arts and social sciences.

The symposium was the first in a series that the Council on Science and Technology plans to present every two years. Held at the Friend Center and the Lewis Arts complex, the event was co-hosted by the School of Engineering and Applied Science and the Lewis Center for the Arts. The series seeks to foster engagement at the intersection of the sciences, engineering, the humanities, arts and social sciences. 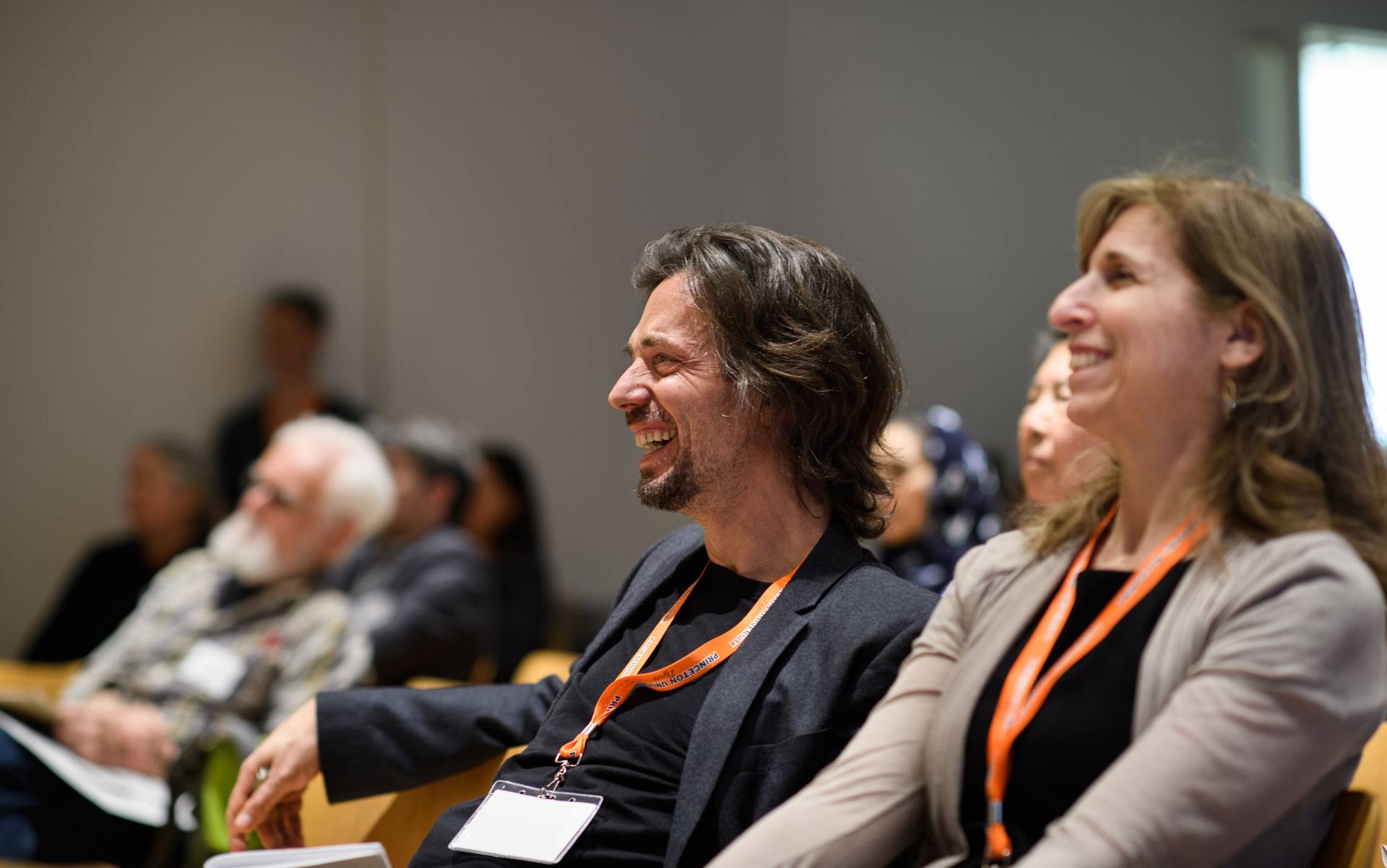 Symposium participants included, from left, Mark DeChiazza, director, designer and choreographer, and Naomi Leonard, the Edwin S. Wilsey Professor of Mechanical and Aerospace Engineering and director of the Council on Science and Technology at Princeton.