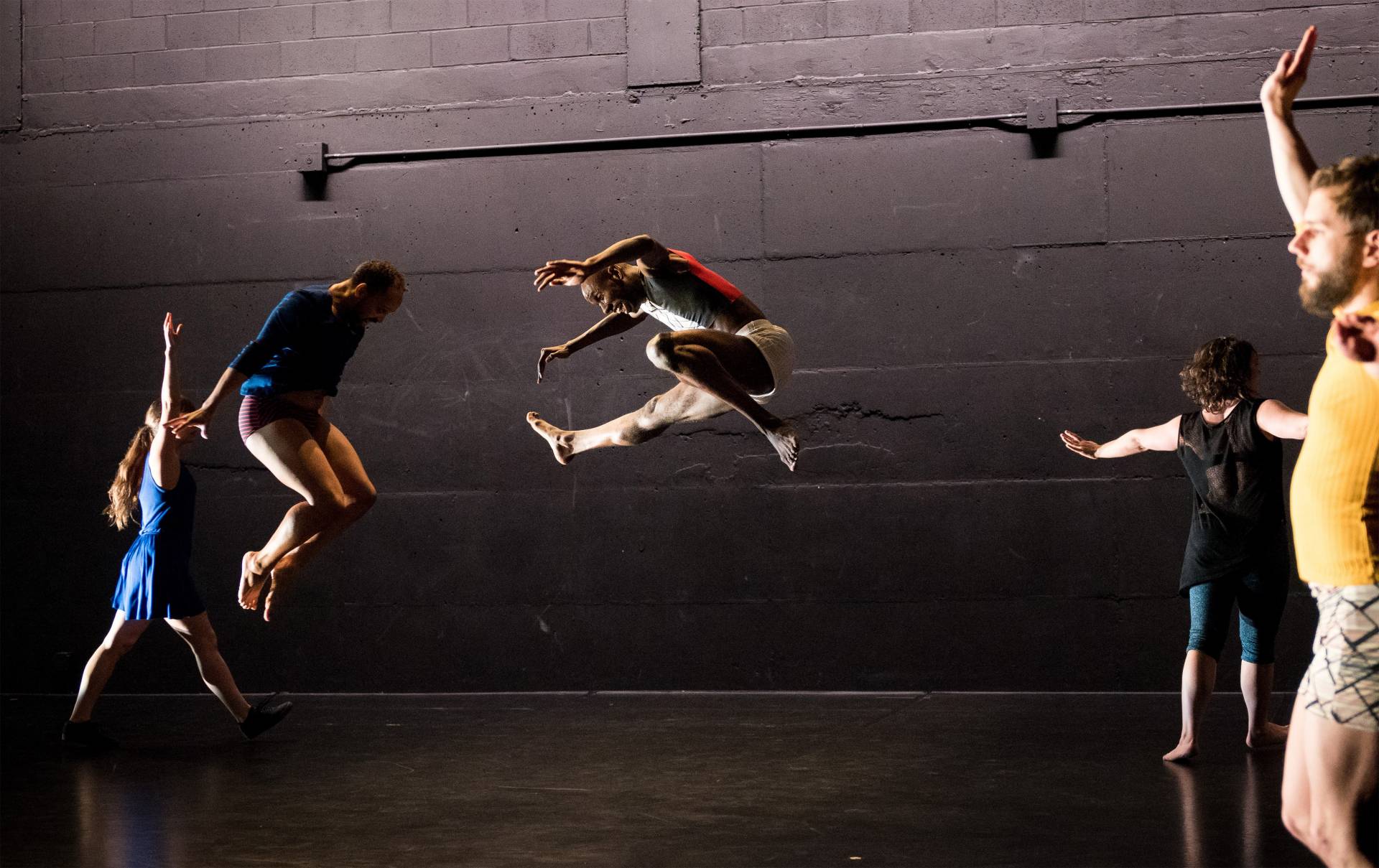 Princeton researchers have developed a mathematical analysis of dancers’ decisions and opportunities for collaborative composition in the rule-based improvisational work “There Might Be Others,” shown here with dancers rehearsing at Princeton. The work is part of an ongoing effort to explore collective behavior in nature and art and to inform the design of control systems for robot teams. It is a collaboration of Naomi Ehrich Leonard, the Edwin S. Wilsey Professor of Mechanical and Aerospace Engineering; Rebecca Lazier, a senior lecturer in dance in the Lewis Center for the Arts; and Dan Trueman, a professor of music.

A work of art evolves from a series of decisions, as an artist combines brushstrokes, dance steps or musical notes to convey a feeling or idea. When a group of interacting dancers improvises a performance from a repertoire of possible movements, the dynamics of the artistic decisions become even more complex.

For Naomi Ehrich Leonard, Princeton’s Edwin S. Wilsey Professor of Mechanical and Aerospace Engineering, this collective, in-the-moment creative process is a valuable model for studying social decision-making. Her team uses mathematical model-based investigations of complex group dynamics to explain and explore collective behavior in nature and art and to inform the design of control systems for robot teams operating in challenging environments.

Leonard is the senior author of a new mathematical analysis of dancers’ decisions and opportunities for collaborative composition in the rule-based improvisational work “There Might Be Others,” choreographed by Rebecca Lazier, a senior lecturer in dance in the Lewis Center for the Arts. In the piece, dancers make sequential choices among 44 movement modules inspired by a variety of dance styles, including “Jump Bean” (bounce and interact with fellow dancers) and “Oar,” which features a paddle-like action. Critical to the artistry and the way the piece unfolds are the performance rules, which guide and constrain when, where and how the dancers perform the sequence of modules. Professor of Music Dan Trueman composed music for the dance that also relies on performance rules and improvisation.

“The dancers were incredible to work with,” said Leonard. “They could express the way it made them feel when our manipulations of the rules gave them more ideas. We learned new ways in which we could impose constraints on the dancers that would make the art more challenging, and therefore more interesting and more exciting.”

In each unique, hour-long performance, individual dancers introduce one module at a time from the set of 44 and recruit others to join them. Up to three subgroups of dancers may perform different modules at the same time, and the juxtapositions of modules should be new to every performance. The upper limit of three subgroups creates a tension because before a dancer can introduce a new module, the three subgroups have to merge into two.

Leonard and her colleagues joined rehearsals of “There Might Be Others” at Princeton, varied the performance rules, and recorded how the relative sizes of the subgroups of dancers performing different modules shifted over time. They analyzed the dancers’ choices using a mathematical model of the evolving subgroup sizes, focusing on the tension between choosing to “exploit” current modules versus choosing to “explore” new modules.

The explore-versus-exploit paradigm has been applied to studies of animal foraging and of attention in the brain. Exploiting returns a well-known reward, whereas exploring refers to taking a risk with the possibility of an even greater reward. In this case, the rewards are artistic in nature, and they change with time — once a module has been danced for a while it becomes less rewarding, and the impetus to explore by introducing a new movement may increase.

Few studies have assessed the explore-exploit tension in group decision-making. The research, published on Nov. 20, 2018, in the journal Interdisciplinary Science Reviews, also represents a new application of an evolutionary theory examining this tension in the context of different survival strategies within a population of individuals.

“This was a fantastic collaboration at the intersection of dance, choreography, improvisation and dynamical systems,” said Leonard, adding that principles from the mathematical model influenced the artists’ approaches and “became the language of the piece.”

In one rehearsal session, the researchers encouraged the dancers to switch movements more frequently, while in another the instruction was to be more resistant to switching. Both Leonard and Lazier noted that these directions made the performers more conscious of their choices and influenced the group dynamics of the performance.

“Naomi’s manipulations of the rules helped the dancers push out of their personal comfort zones and learn to behave as a group,” said Lazier. Learning the explore-exploit language and changing the tendency to switch movements made the dancers more aware of their own habits, prompting some to lead more often and others to deliberately hang back. They also came to recognize resistance to change as an important component of the performance, she said.

“The paper is not only fun, but is a stimulating demonstration of how methods from evolutionary theory and collective decision-making can be applied fruitfully to other fields,” added Levin, who has collaborated with Leonard but was not involved in the present study.

Leonard, Lazier and Trueman would like to extend their collaboration to investigate the decision-making dynamics of the music for “They Might Be Others,” as well as the interplay between the music and dance. Leonard also noted that their model could be applied to understand social decision-making in collaborative design, team sports or other contexts with constantly changing rewards and circumstances.

Leonard is a leader in Princeton's multidisciplinary work in the field of robotics and cyberphysical systems in service to society. One aim of the effort is to coordinate collective behavior of robotic systems without centralized control, which could be particularly useful in search-and-rescue or other complex operations.

The study’s lead author was Kayhan Özcimder, a former postdoctoral research associate in Leonard’s group. In addition to Lazier, Trueman and Leonard, other co-authors were Biswadip Dey, a former associate research scholar working with Leonard; and Alessio Franci, a professor of biomathematics at the National Autonomous University of Mexico. The research was supported in part by the Princeton University Office of the Dean for Research.