Alvin Kernan, the Avalon Foundation Professor of the Humanities, Emeritus, professor of English, emeritus, and former dean of the Graduate School at Princeton University, died May 17 in Skillman, New Jersey. He was 94. 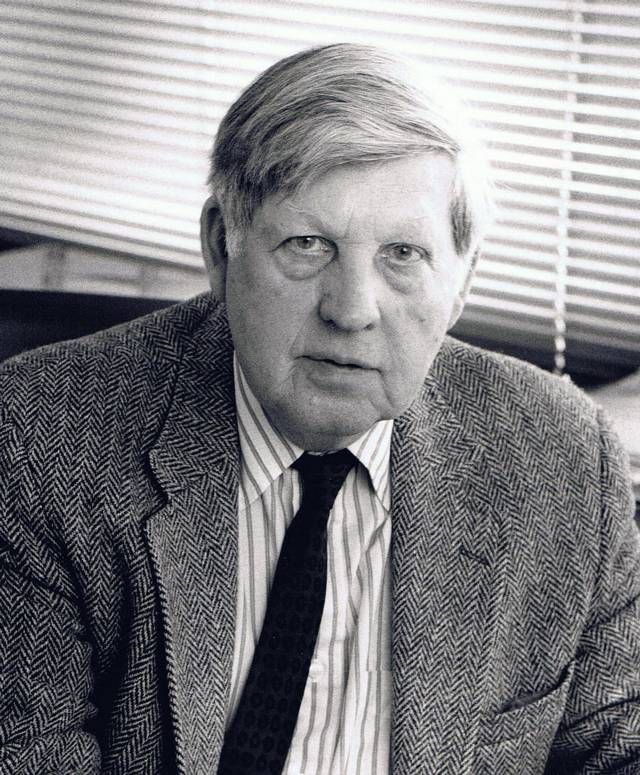 Kernan was a leading expert in English Renaissance drama. He worked at Princeton for 15 years after serving as a long-time faculty member and administrator at Yale University. He was a decorated World War II veteran who also wrote about his wartime experiences.

At Princeton, Kernan taught “Literature and Society” and many courses on Shakespeare. His books include “The Cankered Muse, Satire of the English Renaissance,” “The Plot of Satire,” “Samuel Johnson and Print,” “The Death of Literature,” “Shakespeare, the King’s Playwright,” “The Playwright as Magician: Shakespeare’s Image of the Poet in the English Public Theater,” and a memoir of his early life and naval service, “Crossing the Line: A Bluejacket’s Odyssey in World War II.”

Lawrence Danson, Princeton professor of English, emeritus, said Kernan established his reputation with his two influential books on literary satire, but that he cast his net widely, writing, among much else, an important book on Samuel Johnson and various essays concerning the nature of print culture and the challenges presented to it by new technologies.

“Al mined his wide-ranging interests, from Shakespeare to Evelyn Waugh, Dr. Johnson to the historical sociology of the printing press, for his many scholarly books,” Danson said. “He never met an idea that wouldn’t be better for his research and writing.”

Kernan was born June 13, 1923, in Manchester, Georgia. His family later moved to a ranch in the Sierra Madre Mountains in southern Wyoming, where he graduated from Saratoga High School.

Unable to meet a small cash expense to fulfill his scholarship to the University of Wyoming, Kernan enlisted in the U.S. Navy at age 17. He served on the USS Enterprise (CV-6) and other aircraft carriers as a bombardier in Torpedo Squadron 6, earning the Navy Cross, the Distinguished Flying Cross and Air Medal.

After the war, Kernan attended Columbia University for a year on the GI Bill and completed his B.A. at Williams College, where he won a Moody Fellowship for postgraduate study at the University of Oxford. He earned a second B.A. at Oxford and his Ph.D. at Yale University, where he subsequently taught for 19 years in the English department and was awarded two medals for distinguished teaching.

“Kernan’s seminar on Shakespeare’s tragedies at the Yale Graduate School was the liveliest and most stimulating seminar I ever attended,” recalled Danson, who wrote his dissertation on that subject at Yale under Kernan’s supervision. “It inspired an impressive generation of very bright students to make Renaissance drama the basis of their own successful careers. He was at his teacherly best in the question-and-answer format. A graduate student at Princeton later told me that his nickname among students was ‘the Socratic bulldog.’”

“His lectures on Shakespeare were brilliant, even maddeningly so for a brand-new pedagogue like myself, since they were so perfectly complete in themselves as accounts of Shakespeare's dramas that it was difficult to fit oneself into the conversation,” said Leonard Barkan, the Class of 1943 University Professor of Comparative Literature at Princeton, who was a teaching assistant for Kernan at Yale in the 1960s. “But there was something even more demanding about Al's vision of Shakespeare, which was that he delivered to us, even in the presence of the most light-hearted comedy, depths of melancholy — what the Germans call ‘Weltschmerz’ — that clearly spread in his mind from Shakespeare to the world (or vice versa).”

Kernan was general editor of the “Yale Ben Jonson” and published editions of three of Shakespeare’s plays. He wrote the third volume of “The Revels History of the Drama in English, 1576-1613” (“The Plays and the Playwrights”) and edited the 1970 volume “Modern Shakespearean Criticism, Essays on Style, Dramaturgy and the Major Plays.”

At Yale, Kernan established the literature major in 1972 with colleagues including Peter Brooks and Michael Holquist. The program introduced undergraduates to the study of comparative literature and provided a training ground in deconstructive reading that previously was available only to graduate students.

Kernan served as Yale’s associate provost from 1965-68, then as acting provost in 1970, in addition to being named director of humanities and director of the literature major.

Danson recalled the anticipation surrounding Kernan’s hiring at Princeton in 1973. “When I was a young assistant professor, then-President Bill Bowen rushed up to me during an intermission at McCarter Theatre (it was a smaller University then) and whispered excitedly, ‘We’ve got him!’” Danson said. “It took me a few seconds to figure out who ‘him’ was. Al’s decision to come to Princeton to be dean of the Graduate School marked Bowen’s first triumphant new administrative appointment.”

John Fleming, the Louis W. Fairchild ’24 Professor of English and Comparative Literature, Emeritus, said Kernan arrived at Princeton with “a reputation for outstanding teaching and scholarship, as well as experience as the acting provost of a great university.

“His tenure as graduate dean here, though relatively brief, was marked by several important initiatives,” Fleming said. “But this was also a period of the emergence of various new tendencies in literary study that he found uncongenial.”

Several of Kernan’s later books — especially “The Imaginary Library,” “The Death of Literature” and “In Plato’s Cave” — dealt “trenchantly and polemically” with issues raised by the changing nature of literary study in American institutions of higher learning, Fleming said.

David Redman, former assistant, acting and associate dean of Princeton’s Graduate School, who also was Kernan’s advisee and teaching assistant at Yale, remembered Kernan as having a dry sense of humor and “a very realistic appreciation of people and of the academic culture” because of his wartime experience.

“As an adviser, at least in my case, he let me develop my ideas in the dissertation and then pushed hard to have me sharpen and clarify them,” Redman said. “He was a wonderful editor, at both the level of word choice and expression, and at the level of conception and organization. As a ‘boss,’ he was decisive and demanding. … He did not suffer fools lightly.”

Kernan held fellowships from the American Council of Learned Societies and the National Endowment for the Humanities. Upon retiring from teaching, he became a director of the Mellon Foundation.

Kernan was predeceased by his wife of 58 years, Suzanne (Scoble), who died in 2007, and also by his daughter, Katherine, who died in February. He is survived by three children, Geoffrey Peters of Lambertville, New Jersey; Marjorie Kernan of Blue Hill, Maine; and Alvin Kernan Jr. of Florida.

View or share comments on a blog intended to honor Kernan's life and legacy.